The blockchain was once conceived to make the financial world more accessible and independent for everyone. This is working well and many existing business models are being turned upside down by this new technology. The average transaction is faster and cheaper than with established ways of sending money. I sometimes wonder why an international bank transfer can take up to a week. Who benefits if the money is on the way all that time? You and I certainly don’t!

The XinFin Network is trying to change this. Very slowly, financial institutions are also starting to see the light and are starting to take an interest in blockchain technology. XinFin plays a role in this, because a bank is offered a kind of test environment.

XinFin makes the link between established financial institutions and blockchain technology. In this blog, we will take a closer look at what this project has to offer with its hybrid blockchain.

Please note: please note that the text below about XinFin (XDC) as well as the explanation thereof should in no way be construed as advice. The choice for whether and in what way you want to trade (crypto) and which choices you make in terms of investment is up to you and you alone. We are not financial advisors.

To warm up, here’s a video that describes what XinFin does. Then we will go over that extensively in written word.

What is XinFin Network?

XinFin is a hybrid blockchain that makes it possible to have a public part and a private part on the blockchain. This is a very handy solution, because financial institutions or governments always have information that is not public. The abbreviation stands for eXchange inFinite.
Imagine that bank A does business with bank B, that’s no problem and this can be done in public. It is very transparent and the blockchain technology also makes it possible to see all of this. However, you can also imagine that both banks would rather not have one bank stick their nose into all the financial difficulties of the other.

That is why the hybrid blockchain is a perfect solution. Two or more parties can do business with each other in a public, transparent manner. At the same time, however, they also have a private ‘state’. So, on the one hand, you have the power and transparency of a public blockchain. On the other hand, however, you also have the security and speed of a private blockchain. And this is not only convenient and attractive for banks, but for many more people or companies. Governments are taking advantage of this setup, as are universities, start-ups and corporate companies. The mainnet went live on June 1, 2019. 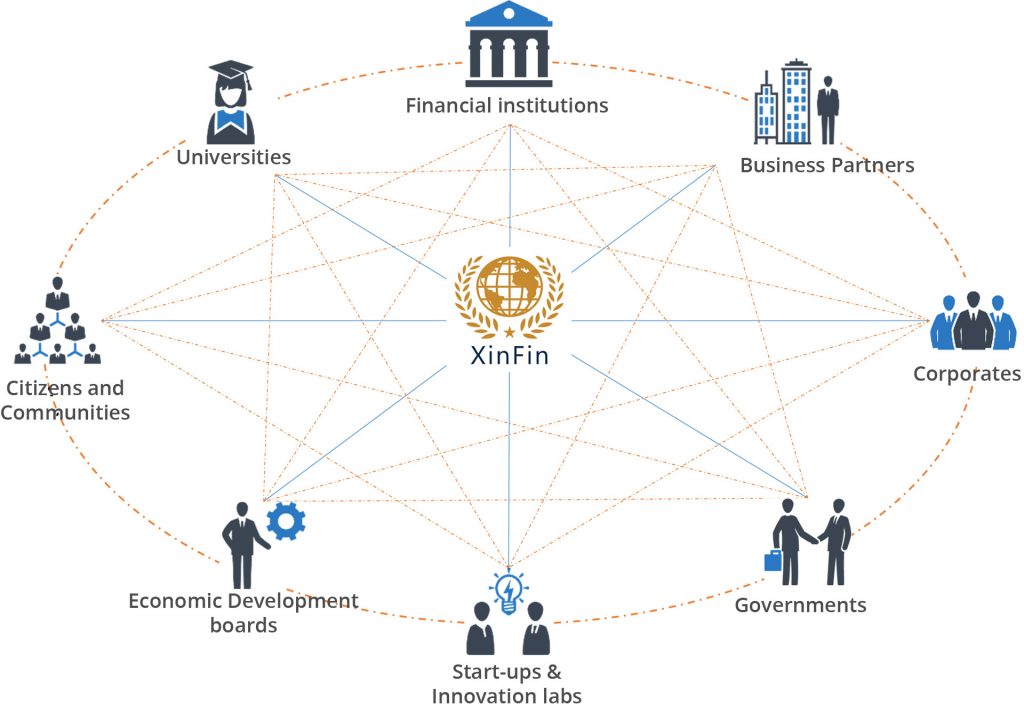 XinFin uses a permission consensus mechanism instead of power-hungry mining. So it is a mining free blockchain, you mint the coin XDC. I wonder if Elon is listening!
This blockchain also continues the idea of ​​masternodes and is EVM ( Ethereum Virtual machine ) compatible. Masternode chains increase scalability, albeit at the expense of decentralization. A masternode is a server that gives computing power to the network so that blocks can be created. In the XinFin network, the masternode receives XDC as a reward for its work. There are a total of 108 masternodes.

By working with masternodes and Proof-of Stake consensus ( PoS ), you can mint instead of mine this coin . This is also important because it solves Ethereum’s scalability problem. As a result, the network has low transaction costs and a fast confirmation time for transactions. At the moment that is 2000 transactions per second (TPS). This high number of TPS has been achieved because they use sharding. With sharding, a data file is partitioned (divided into smaller parts) and therefore you get a faster transaction speed.

The image below shows very clearly how much faster and cheaper the XinFin network is, compared to Bitcoin and Ethereum . It is not unimportant that it is also clear to see how little energy the XinFin blockchain consumes. That is certainly interesting because, quite rightly, there is a discussion going on about the environmentally unfriendly energy consumption of, for example, Bitcoin . It also makes XinFin one of the most environmentally friendly blockchains out there today. 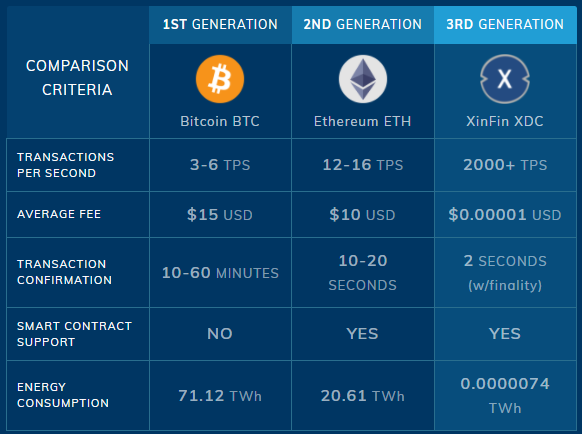 How does the XinFin network work?

The XinFin network works by staking and using the XDPoS consensus mechanism. This mechanism is there to secure the network and make it work. You can stake the XDC coin and become a masternode as well. You will need 10 million XDCs to participate as one of the 108 masternodes. Due to this high number, the network is not abused. If you have 10 million XDC coins in the network, you probably want it to run smoothly!
As an extra security, there is a double validation mechanism. This means that two masternodes are needed to approve a new block. Randomness is also used, because the validator is chosen randomly. This is all done automatically, making the network completely decentralized and in a healthy state.

The staking is also a kind of mining, but the big difference is that you don’t need any hardware. It is also a lot more environmentally friendly. You will receive a reward for both activities. On XinFin, this is in the form of the XDC coin.
Of course you can also strike without being a masternode. Not everyone has just a bag of 10 million XDCs lying around! Striking increases the security of the network, which you then participate in and you receive a reward in return.

Applications of the XinFin network

Since XinFin has a hybrid blockchain, the advantages of which we have already explained before, it has many different applications. The fact that you have both a public and a private blockchain, can be used for almost anything. Let’s take a look at some applications.

Of the 7.7 trillion people living on Earth, approximately 2 trillion do not have access to a bank. The cause is various problems, but a leading role is reserved for middlemen and financial institutions that are very selective. Banking is inefficient and time consuming and it creates economic inequality. This makes people dependent on alternative and informal banking systems, such as borrowing money and landlords. This usually involves exploitation. 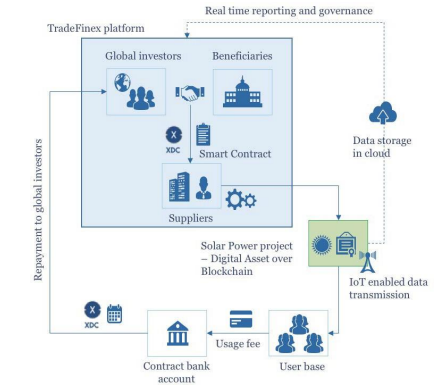 In the image above you can see how a financing via TradeFinex works.

Thanks to the blockchain technology, you can already eliminate the intermediaries and with a mobile phone you can always reach your platform online. TradeFinex is built on the XDC platform and solves the mentioned problems.

Turantpay and the Alphaex exchange are other examples of how this can be applied.

The DCB bank is a commercial private bank that has chosen XinFin to streamline their insurance system through the blockchain technology.

Land Registry uses the blockchain for their land registry management and management. There is now access to real-time cadastral changes, which can also verify this. This is many times more efficient than the current manual process.

Several other dApps have been built on the XDC blockchain. Currently, all 108 masternodes are occupied by institutions and individuals. Because XinFin is EVM compatible, developers can use their Ethereum smart contracts on the XDC blockchain with no or minimal customization. In addition, XinFin uses the ISO20022 financial messaging standard. This ensures that there is agreement between the hybrid blockchain on the one hand and the current financial systems on the other. This allows, for example, governments or financial institutions to easily convert their centralized systems into a decentralized blockchain system.

What is also important, especially in the banking world, is stability. That’s why XinFin also has stablecoins , which are less dependent on the volatility of other cryptocurrencies. For example, there are SGDg and EURg.

The ICO (Initial Coin Offering) in March 2018 raised no less than 15 million US dollars. The XDC token is the native token of the XDC blockchain and this is where the blockchain runs. 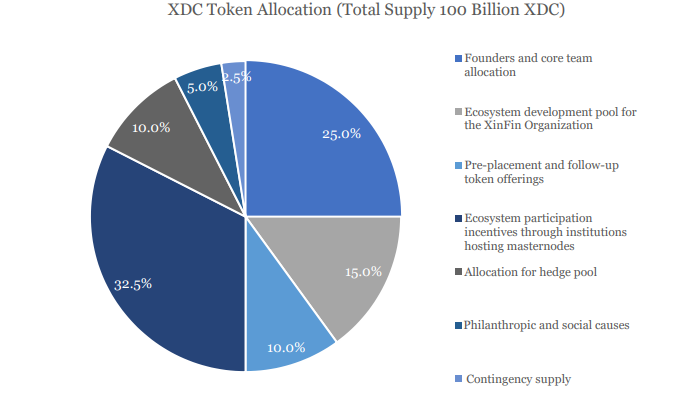 The image clearly shows how the allocation of the 100 trillion (!) XDC tokens takes place.

25% goes to the founders and the team. However, this amount is fixed and a maximum of 1% per year can be withdrawn. This is a good sign as it shows that the team is in it for the long haul and not running out of their share any time soon.

15% to the ecosystem. This keeps the organization running. This is also fixed and a maximum of 2.5% per year can be extracted.

32.5% for ecosystem participation incentives. Among other things, the masternodes are paid for this.

10% for a hedge pool. Trade between financiers, buyers and suppliers is thus hedged against price fluctuations of the XDC token.

2.5% in a reserve fund for unexpected expenses.

Where can you buy XDC?

You can buy the XDC token on various exchanges. KuCoin and Bitfinex are the best known. You can also visit Liquid, Indodax, Bitrue, HotBit, Changelly Pro and several others. Binance and Bitvavo do not currently have the XDC token in their offer.

How can you store the XDC token?

First, XinFin has its own XDC web wallet  and mobile wallet on the Google Playstore . With this wallet you can make real-time worldwide payments.

Because the coin is not yet traded on much larger exchanges, there are also less well-known online wallets where you can store XDC. There are the Guarda Wallet, Biometric Hardware Wallet (D’CENT), Freewallet and XcelPay.

The 2021 roadmap also shows that work is being done on integration with Ledger and Trezor wallets.

You can of course leave your XDC on the exchange where you bought the token. However, now you do not have access to your private keys. There is always a danger that a stock exchange will be hacked and then you will lose your coins.

So it is better to have an online or hardware wallet for your XDC coins. However, make sure that you always keep the private keys, a series of random words, well. Make a copy of them and keep them in three or four different places. If for whatever reason you lose your wallet (computer crashes), you still have access to your digital coins. Also, never give your private keys to anyone else. If someone asks about this, something isn’t right, just assume it.

Who are the team behind XinFin?

The co-founders and current team behind XinFin are experienced people with blockchain and computer program backgrounds. The team is based in Singapore.

Ritesh Kakkad is one of the co-founders. He has extensive experience in Cloud Hosting, Cloud Setup and Internet Infrastructure.

Sameer Dharap was vice president. He has extensive experience in consultant management. He has now gone his own way and has already started new companies.

Ankit Patel is director. He does research and development. He is also a Java developer.

They also have an extensive team that looks after the different facets of a blockchain business. They also have several good advisors, including Simon Bowles and Roger Ver, the CEO of Bitcoin.com.

We have given an extensive explanation about the XinFin project. They set the stage for a bankless world through their TradeFinex project. They also offer fast and cheap transactions, which is nice when you consider Ethereum’s gas costs.

Being a hybrid blockchain, they can also offer a public blockchain and a private blockchain. This is again interesting to get established financial institutions and governments on board. There are more applications for this and we have also discussed a few.

It’s a very interesting project and the team is constantly updating their roadmap, which is a good thing.