Each blockchain is unique and works as a fundamental building block for a project. We see several projects built on the Ethereum blockchain, the ERC20 tokens, but with the advent of the Binance Smart Chain (BSC), we see a formidable adversary. However, we see that communication between different blockchains remains a difficult and cumbersome process. Wanchain (WAN) is therefore creating a new financial market by implementing digital assets that enable cross-chain transfers across different blockchains.

Wanchain was founded in 2017 by Jack Lu of Wanglu Tech, a Chinese company valued at more than $500 million. The project is headquartered in Beijing, China and Austin, Texas. Wanchain launched their project through an Initial Coin Offering. This is similar to a crowdfunding where they reach potential investors who want to invest in their project. They have the option to purchase tokens before it reaches the big market. They only raised nearly $36 million  through this ICO . Wanchain is a fork of Ethereum , not the blockchain , but the code.

The blockchain technology and the decentralized character have many advantages that an investor likes to make use of. This comes with great responsibility, the responsibility that we do everything ourselves in the correct way. Unfortunately, it happens more often that tokens are sent to a faulty blockchain via a faulty network and that you have lost these tokens for good. With an explosive market, with more trades taking place every day, there is a need for a decentralized platform that can connect different blockchains.

Wanchain is creating a new financial market for digital assets by implementing cross-chain transfers across different blockchains. Currently, there are so many different tokens and blockchains active in the crypto ecosystem that there is no efficient nor decentralized way to transact between them. As an independent blockchain, Wanchain connects the accounts of independent chains to provide a framework to enable easy transactions between these digital assets.

Wanchain’s protocol is a fork of Ethereum, not the blockchain, but the code and uses smart contracts . In addition, they also want to offer a platform where anyone can build a large number of decentralized applications (dApps). In this way, they are working hard on decentralized financial interoperability. See a video about Wanchain below.

When you discover a new project and want to learn more about it, you should always ask yourself: what problem are they solving? If they don’t try to solve a concrete problem, it could just be a rogue project. In the case of Wanchain, they have a very clear objective.

The number of projects and blockchains has grown exponentially in recent years, but there is currently no efficient and above all decentralized way to trade digital assets between in the network, cross-blockchain. Today, the investor has to download multiple portfolios and rely on the often central nature for their financial transactions. Unfortunately, we have seen in the past that the central exchange is not watertight and the founders can run off with your currency. In addition to the miserable identification procedures you have to do, this also comes with a lot of risks. This is also one of the reasons why we hear more and more about DEX, or decentralized exchanges. These are not new, but there is still a lot of room for improvement.

They want to realize this by linking blockchains where they want to keep transaction costs low. Recently, Ethereum has been criticized for its high transaction costs. This makes investments, certainly for smaller amounts, less attractive. Wanchain wants to keep these costs as low as possible so that everyone has access to this new financial market.

In addition to the purely financial character, Wanchain wants to further profile itself in the world of decentralized finance. They also use a platform where you can build decentralized applications, these are an important part in the world and further developments of DeFi .

How does Wanchain work? 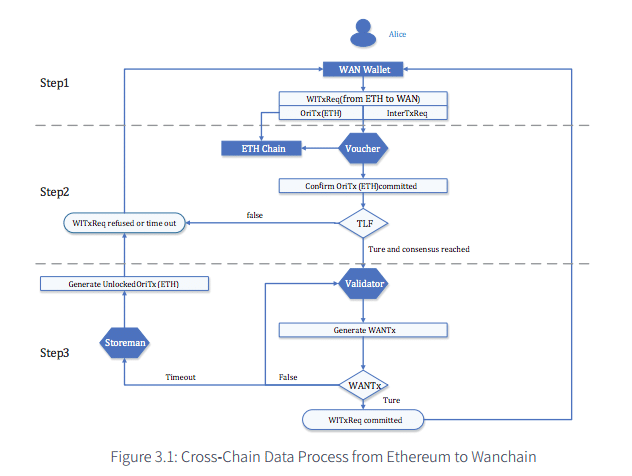 Wanchain (WAN) is a fork of the Ethereum blockchain and uses Proof-of-Stake ( POS ). A fork is a blockchain that splits off. This happens because they no longer agree with the current protocols and would like to see it differently. Because of the blockchain technology, they cannot change these protocols. This creates forks of current blockchains. Forks are not new to the world of crypto, we already have several forks of Bitcoin . For example, in addition to Bitcoin (BTC), you also have Bitcoin Cash and Bitcoin SV .

In the current network, communication between different blockchains is difficult. It is possible to trade your current token with tokens from another blockchain, but with the necessary intermediate steps that often also cost you relatively expensive with all the transaction costs. This is of course the first step towards a network where you want interaction between different blockchains. It provides a way to exchange currency and data between Wanchain’s network and other chains in the ecosystem. The communication protocol has three different functional modules:

In a transaction between different networks, it is important to determine from which network this transaction comes as well as which digital asset is being transferred. This registration keeps track of which networks communicate with each other and which data they exchange. It collects all necessary information before executing this transaction.

This is the effective transfer that takes place in the network. After the registration is complete, the network can proceed to the transaction. This confirms whether the transaction can go ahead or is stopped. We speak here of a cross-chain transaction request.

After the transfer is approved or rejected, we enter the status module. This monitors the status of the transaction. Basically this is all done using smart contracts to execute these transactions in a fast and efficient way.

Wanchain (WAN) operates on a Proof-of-Stake (POS) algorithm. This means that by staking your own crypto coins you will receive rewards for this. The Proof-of-Stake model provides several authentication nodes that control the network and break down the transaction costs:

Vouchers verify the cross-chain transactions. They receive a deposit of the costs for that particular transaction. In return, they provide proof that the transaction took place between the original blockchain and Wanchain’s blockchain. If this proof is not valid, the deposit will be debited and the Voucher can no longer authorize transactions.

Wanchain’s protocol uses the Locked Account Generation Scheme to secure funds and keys for transactions from all parties. They do it this way because it has a lot of advantages, such as more stability and decentralization.

We see that Wanchain (WAN) is one of the first projects in the ecosystem to incorporate privacy into the use of their smart contracts. Of course you want to keep your anonymity in a decentralized network and not flaunt your personal data. Wanchain solves this by using so-called ring signatures and a one-time numerical address. With every new transaction, a new address is created. In many blockchain transaction models we see that we have a numerical code that is equivalent to a personification of a user. Although this numerical code does not directly say anything about the user, it would be possible to discover who is the person behind this unique code through several intermediate steps. By providing you with a new code with every new transaction,

A ring signature is a way to guarantee your privacy. It kind of mixes your own signature with a whole bunch of other, non-existent signatures. This gives you a pool of all kinds of accounts, including signatures, where you cannot check which signature is real or not, and which account it belongs to at all. This makes it difficult to approach or discover the actual sender.

The year 2020 was an important year for Wanchain in which they made great strides. The vision she described in the white paper took shape in 2020. They successfully launched a centralized cross-chain with Wanchain 5.0. Why 5.0? Wanchain continues to iterate and optimize their cross-chain technology. This one is an essential technical achievement that they have succeeded in. In the current year 2021, they want to shift the focus from low-level infrastructure to expanding on a larger scale, namely the entire ecosystem. For example, they want to expand chains that are connected to their decentralized technology and further innovate in the platform for their dApps. With several blockchain chains already operational, they are also constantly integrating new public chains and new assets.XRP ) on the schedule, as well as Polkadot (DOT) and remaining ERC20 tokens.

Providing liquidity is an important part of a DeFi infrastructure. It relies on users adding their LP tokens to the liquidity pool. To reward them for this, you get rewards. Wanchain enters into a partnership with wanFarm. This is a liquidity farming tool that allows users to lock their tokens in this pool and get rewarded for doing so. Well-known examples are Uniswap ‘s UNI-V2 and PancakeSwap† WanFarm will be strategically positioned to direct liquidity to the parts of Wanchain’s DeFi ecosystem where it is most needed. A major disadvantage of this liquidity pool is that they depend on the supply in the current pool. This can result in strong volatility and can change very quickly. Therefore, in this way, they hope to create a more stable pool that is attractive to many investors.

This strategic position will also lead to more users seeing their opportunities in this liquidity pool in the future, resulting in higher rewards. It is a positive cycle that arises where liquidity is provided. This is essential in the world of DeFi to ensure price stability and make investments as attractive as possible for users.

There are several projects in the crypto world that want to change the financial landscape. With the ideology of crypto opposing the current money system, everyone wants to conquer the new financial world with their project. Like many, Wanchain targets the entire financial market. They themselves stand for a centralized financial interoperability where they want to bridge all projects in the crypto ecosystem. With this they want to fight the complexity that the world of decentralized finance (DeFi) can entail.

Just remember that you first need a certain token in order to be able to invest in another token. We soon see that unfortunately you can only buy tokens via a major detour, including the often high transaction costs, to make an investment. If this process goes wrong, you may just lose your tokens.

In addition to Wanchain, there are other projects that focus on the financial market in the ecosystem. Ripple (XRP) and Stellar (XLM) are the most comparable in this regard. With its focus on interoperability, ICON can also be seen as a competitor. With Wanchain you can also build decentralized applications (dApps), some claim to say that in this way Ethereum can also be considered as a direct competitor.

We are increasingly aware of the importance of decentralization in these new financial developments. However, it can be a complex process to trade in this because you are working with different blockchains that cannot communicate with each other. Wanchain is unique because it combines the functionality to create a whole financial and decentralized ecosystem. It is also one of the few projects that uses this ring signature and one-time unique addresses to offer anonymous smart contracts. They make the world of decentralized finance more accessible through their decentralized financial interoperability.