What is Venus (XVS)?

Venus is an algorithmic money market and stablecoin protocol launched exclusively on the Binance Smart Chain (BSC). The protocol introduces an easy-to-use solution for borrowing and lending crypto assets for the DeFi ecosystem. This allows users to take out loans at a high speed through collatoral. All this while losing just less transaction costs, which currently continue to spike in the world of decentralized finance.

Users can also participate to store VAI, the centralized stablecoin, by offering at least 200% collateral to the smart contract of the Venus protocol. These VAI tokens are synthetic BEP20 tokens that are pegged to the value of one US dollar. XVS tokens are also BEP20 tokens, provided both are part of the Binance Smart Chain, but they are used to manage the Venus protocol as a governance token. Users of the protocol therefore also have decision-making rights. Thus, the protocol is a peer-to-peer network that is fully controlled by the users of the XVS protocol.

The evolution of DeFi has created a vast and diverse financial ecosystem built directly on various blockchains, running on smart contracts. Platforms in the world of DeFi are redefining the structure of current money markets.

When you want to take out a loan in the traditional world, you will have to demonstrate other factors in addition to credit so that a lender can make a decision, even when the user has collateral such as houses or cars. Traditional lenders do not yet allow it to use cryptocurrencies as collateral to receive loans or earn interest.

Venus thus wants to bridge the gap between traditional financial loans and loans via a decentralized protocol. It is not the first protocol, but those are built on the Ethereum blockchain which are currently known for their high gas fees and slow transactions.

Users of the protocol have the choice between various supporting crypto assets on the platform, which are then used as collateral. Through this collateral, they can take out loans, provide liquidity, earn interest and mint synthetic stablecoins .

Interest is earned in a variable manner, depending on the market fluctuation. All assets are merged into smart contracts , allowing users to query their inventory at any time. It is therefore not a fixed way, which makes the threshold less high.

If you have made digital assets available to the protocol, you will receive a vToken. This is the only token that can be used to exchange the underlying collateral back. This coin is like a wrapped token, it is a representation of another value that you do not currently own. So you can always swap this vToken for the effective value of your investment.

Users who want to borrow digital assets from the protocol must provide collateral that is locked by Venus. Up to 75% of the value of the collateral can be borrowed. This ratio can be determined by governance function that users have in the protocol. Due to the voting rights, users with sufficient XVS tokens will also be able to determine the percentage of collateral that must be provided with each loan.

The distribution of XVS tokens is done in a fair way, with no allocation of tokens to the team or developer. XVS can only be earned through the Binance Launchpool or by extending credit to the liquidity pool.

Venus was one of the first protocols on the Binance Launchpool. Here, users can offer a number of crypto coins in the pool, for which they receive a share in new tokens, in this case XVS tokens. For example, it was possible to offer Binance Coin ( BNB ), as well as Binance USD (BUSD) and Swipe ( SXP ) tokens. 6 million XVS token, a total of 20% of the total supply of XVS tokens was made available to the Binance Launchpool. Afterwards, XVS entered the trading platform of platform.

The Venus Protocol (XVS) native token is a governance token that allows users to vote on the platform:

The protocol is managed by XVS token holders with the help of three different components: the XVS token, the governance module (Governor Alpha) and the Timelock.

This is the governance model of the protocol. It allows users to propose changes to the protocol. This is exclusively for XVS holders with more than 300,000 tokens. They can cast their vote during a voting period of 3 days. If there is a majority in the vote of at least 600,000 votes, the change can be implemented after 2 days. 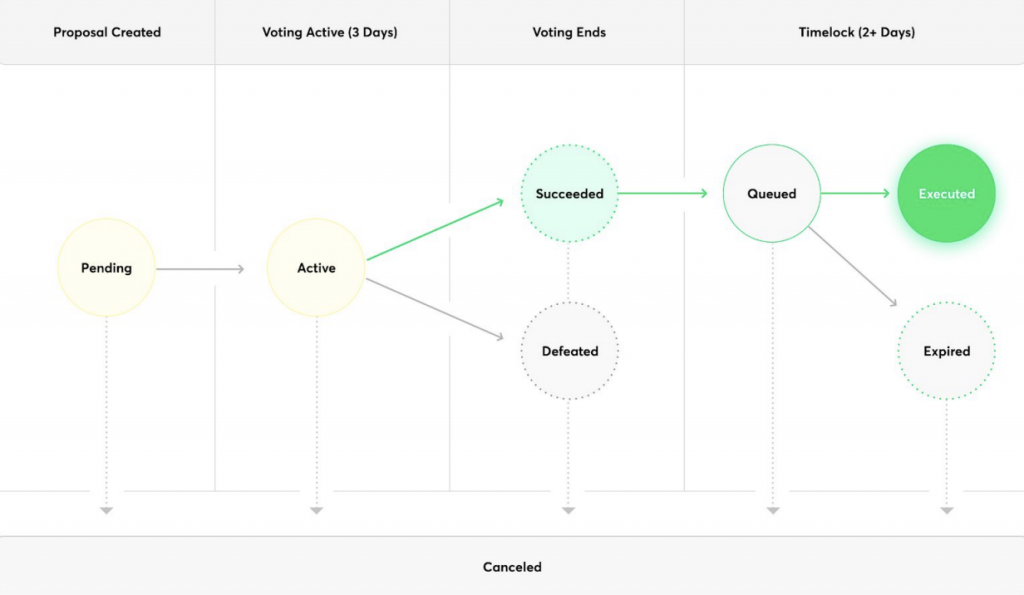 At some point that are created to determine the maximum supply of synthetic stablecoins. 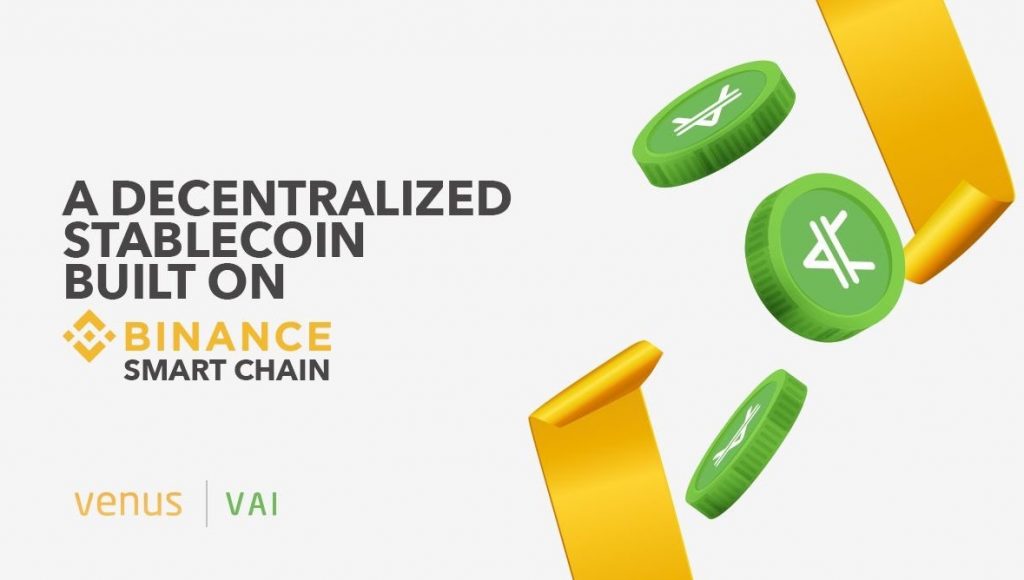 The Venus decentralized platform is accessible via web browser via your personal wallet . When connecting, it immediately asks for interaction with, for example, your MetaMask wallet. Make sure you have a correct network on your MetaMask, as this wallet is an Ethereum wallet by nature. If you are on the wrong network, your wallet will not connect to the protocol. The protocol operates from this platform and everything regarding the protocol happens here. This method is typical for a DEX or a decentralized exchange.

In the dashboard you immediately get an overview of your current XVS tokens that you are holding in the protocol, as well as the total VAI (stablecoin) that you have minted in the protocol. Based on your current investments and the market fluctuations, you will get a staking APY in the dashboard and also an overview of the amount of XVS tokens you have received as a reward by making your tokens available in the VAI Reward Pool.

The protocol supports their plans through a use case they have included in their white paper:

Alice wants to buy her new dream house, but the bankers have rejected her application. Alice has been a supporter of cryptocurrency for years and has a good portfolio, but she does not want to pay capital in capital gains tax when actively selling her cryptos. In addition to this extra tax, she will also no longer have crypto coins and therefore no longer be able to enjoy the growing market.

But again, Alice believes very strongly in blockchain technology and wants to keep her cryptocurrency to grow her portfolio. However, she also needs cash to buy her dream home. So what does Alice do?

It cannot rely on traditional banks to lend credit. Alice uses the Venus protocol by moving the tokens from her wallet to the Binance Smart Chain in the protocol. She herself uses her internet browser to access the dashboard and delivers her coins to the protocol. She is now taking advantage of the hoped potential rise in her crypto, while also earning a modest APY on her current digital currency.

She borrows USDC and uses her crypto account to convert it into fiat money. Now Alice has enough money to buy her dream house while waiting for the markets. She is not required to make monthly repayments and can make payments at any time without paying additional interest. Its current crypto portfolio is being used as collateral to provide the loans.

Finally, Alice paid attention to DeFi and all the new revenues she earns from farming and the attractive APY rates. Alice wants a one-stop-shop solution so that she can participate in yield farming and make use of all the other benefits. In the dashboard, Alice can store stablecoins herself without any central authority and use them again in the protocol.

Venus has over 20,000 users with a total value of nearly $2 billion in protocol. Experts by experience say that Venus is perhaps the most decentralized financial product in the entire blockchain. However, there are still important things on the agenda for the further development of Venus XVS:

These small fees will add a small fee to creating a loan and paying off a loan. This fee carries one basis point, which is equal to 0.01%. At the current rate, it will bring about $100,000 in daily fees to the protocol as reserves. These can be used for further developments and governance matters.

The Venus Reward Token (VRT) will be introduced as a liquidity token for the Venus protocol. This can make the XVS token more scarce and valuable, and give the governance function even more power. Currently, there are more than 20 million XVS tokens to be mined and distributed, tripling the current supply. This creates a higher inflation resistance. This mechanism will create a reward token while also creating longer inflation programs for XVS.

The DeFi ecosystem is often characterized by very attractive interest rates. While this is one of the reasons for many investors to delve into the world of DeFi, these variable interest rates are not without danger, especially as your lender. After all, you do not want to be faced with unpleasant surprises when repaying your loan.

The fixed interest rates can be experienced by some investors as too inconvenient or too disturbing, so that the potential cannot be reached to the maximum. Venus therefore wants to introduce a market with a fixed interest rate, where both the lender and the lender know in advance how much interest they will earn or pay. This ensures a guarantee from both sides. This will become part of the liquidity mining program.

With the Venus protocol, we see that the world of decentralized finance is developing more and more. Originally, the DeFi ecosystem was a response to the current central exchanges, but now it is possible to extend credit and take out loans in a DeFi environment. Due to further developments, use cases are becoming more tangible and the world of DeFi is also trying to attract the general public.

The protocol is designed to provide platform users with a secure and centralized marketplace to take out loans, earn interest and store stablecoins. It is built on the Binance Smart Chain, bypassing the high transaction fees and slow transaction speeds on the Ethereum network. This makes the protocol scalable and aims to provide future perspectives in the financial world of DeFi.