When designing an ecosystem, developers are more often limited by the choices we make. But thanks to UBIX.Network, they no longer have to make choices, but the possibilities are endless thanks to the hybrid blockchain structure. Developers can custom design blockchains and have them communicate flawlessly with other blockchains in the network. Decentralized applications (dApps) are seamlessly integrated, opening the way to a digital universe that is attractive to both users and developers. In addition, they have their own integrations such as an exchange , a supper application called Ubikiri and their own crypto bridge.

UBIX.Network calls itself a ‘digital universe with endless possibilities’. This is a big statement that they immediately make, and this is what they want to achieve. UBIX is a hybrid DAG/ blockchain that integrates different types of blockchains and consensus algorithms into one peer-to-peer network. So users can design their own blockchain in the network.

Due to its flexibility, UBIX Network is seen as suitable for individuals, small companies and even multinationals and governments. All blockchains designed on the network are in the same ecosystem, in the same network. This means that they each integrate without the use of a gateway, ensuring complete decentralization.

Users of the network can therefore realize different processes by means of their own blockchains, but they can also use this for private matters.

What is a DAY?

DAG stands for Directed Acyclic Graph and points to an alternative way of recording data on the blockchain. In a blockchain, information is recorded on the basis of blocks, which are built up linearly in the network. Each transaction must be validated, after which it is included in a block. This series of different blocks, made up of numerous data, make up the linear blockchain as we know it.

During a DAG, several structures can arise, each of which has a different task in the ecosystem. Another advantage of a DAG structure is that it can handle a high volume of transactions, which directly ensures scalability of a protocol. With a blockchain structure, miners can only validate one block at a time. New transactions can therefore only be validated when the previous one has been completed.

Example: You have a database of sales from any company that trades worldwide. You want an overview of all sales per country, expressed in euros. With a DAG structure you could import all data, and then separate or filter it based on various criteria such as currency, country and even per product.

In blockchain technology, a distinction is made between public and public blockchains. In public blockchains, anyone can consult, read and even co-write the source code in order to optimize it. In a private blockchain, only one party has access to read and even write it. The nodes, or validators in the network are limited so that validation can be done faster. Public blockchains are more likely to suffer from scalability because of this problem. This difference is taken over in the current structure of a DAG. Thus, networks can be private or public, each with the choice of whether they want a Proof of Stake (PoS) consensus or a Proof-of-Work ( PoW ).

Ubikiri takes its name from the Japanese word yubikiri, which means ‘pinky swear’. This super application is the beating heart of the ecosystem. Ubikiri consists of an online wallet , a social network, an exchange, a bridge and much more. The goal of Ubikiri is to be a universal and global platform for all legal agreements. They do this through their Distributed Ledger Technology (DLT). Think of contracts, transfers of licenses, general payments and also transfer of information. Thanks to the integration of SilentNotary , a certain transaction or action immediately becomes legal proof. This also immediately excludes forgery. 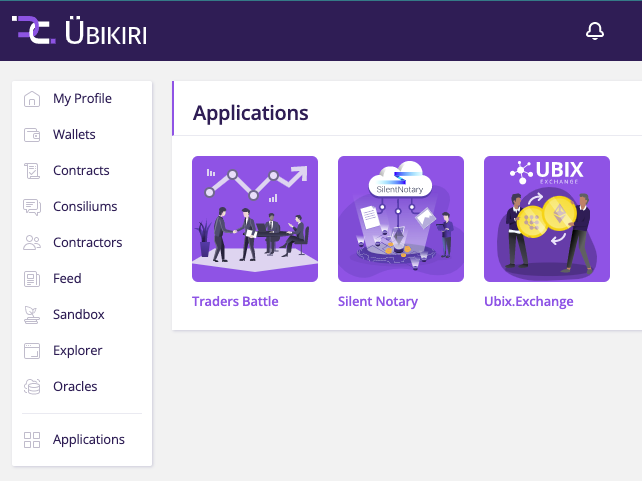 The platform was developed to provide users with all these options in one easy-to-use interface of Ubikiri. CFO and co-founder Aleksey Petrov himself makes the comparison with Facebook , the largest social media platform in the world. Facebook is nevertheless unable to enter into legal commitments. Ubikiri says that neither Facebook nor LinkedIn are suitable for building business relationships and enabling business communication. Ubikiri is the solution according to the team.

They use the blockchain and DAG structure to record this communication on the blockchain. It is decentralized and every transaction is associated with a timestamp which is immutable. In this way they want to create an online platform that realizes legal interactions between individuals, companies and even governments. Through the application you can consult more information about a specific person in a few seconds, before doing business with them.

SilentNotary is a decentralized notarial platform with numerous functionalities. The ultimate user interface, according to the team itself. The company validates the veracity of existing services and then converts them into legal evidence, where there is no possibility of forgery.

An example that they themselves indicate is the copyright of a website. Everyone has access to the internet and web texts are very often copied. When a dispute arises over who is the rightful owner of the piece of content he or she has written, it is often difficult to trace because this information is not stored anywhere. This also applies to photos and videos that are downloaded, sent and reused through other channels without permission.

Thanks to blockchain technology, this information is processed and stored on the blockchain. SilentNotary wants to make all this possible and register it on their central platform. In addition, new business contacts can research someone’s background, based on past performance. So you can never lie about your experiences or property deeds. 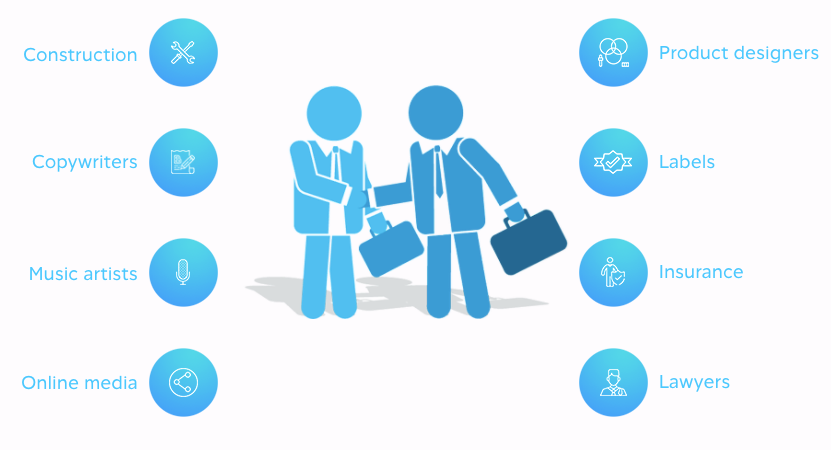 DLT, better known as Distributed Ledger Technology is a technology that uses different systems and ledgers. Transactions are made and then stored on a ledger. These systems are then all connected to each other and therefore also work together to analyze and store more data. If you own crypto yourself, you are in fact also part of a network that is part of this larger whole. Several projects are already using the DLT technology, but according to Ubikiri they often do not get any further than a simple interface where they have access to a native wallet.

UBIX Network is much more than a hybrid ecosystem where anyone can design a blockchain. They have even decided to launch their own exchange. UBIX Exchange is live where you can start trading actively. To date, this exchange is still very small and it is only possible to trade in the following trading pairs:

It is still a very young development of the team and there is not much liquidity on the platform at the time of writing. The latter is always an important factor before you decide to trade on a particular exchange. With the development of UBIX.Exchange, the team aims to create an ecosystem where users can enjoy all the functionalities that crypto has to offer. The future will show whether this exchange will be successful.

UBIX wants to encourage users to use the network. They do this by rewarding UBX holders with airdrops. Users who stake more than one million tokens on the platform will receive 0.10% worth of UBX tokens every day through airdrops. This percentage has already fallen, but is still a very nice return on investment. This airdrop will continue until all coins are in circulation. After no less than 20 years, the liquidity fund would be reduced to 30%. At the time of writing, you must therefore stake at least $430 worth of UBX tokens via the platform, in order to have a chance to win these free airdrops.

The UBIX ecosystem has also launched its own bridge. This allows users to bridge their tokens between the Ethereum network and the Binance Smart Chain network. Free movement is thus possible between ERC20 tokens and BEP20 tokens. Despite the fact that this bridge is already live on their website, they still run into many teething problems. The question is therefore whether they will expand their functionality to other networks or focus on the Binance Smart Chain. There are also more and more bridges available that integrate multiple networks.

UBIX.Network has a maximum supply of 1 trillion UBX tokens. At the time of writing, roughly 38.5 billion of these are in circulation. Think of the minimum requirement of 1 million UBX tokens to be able to strike in exchange for the free airdrops. But you can of course also trade UBX tokens, for example on KuCoin and UniSwap . Note that on UniSwap is only possible with traindingpair WETH/UBX.

The network uses Proof-of-Stake (POS) and mining is therefore not possible. All masternodes are rewarded based on the transaction costs. These are paid in the native token of the network. 10% of all these proceeds go directly to the team for the further development of the ecosystem.

At the top of their roadmap was the branding of their website. They are already done with that. I believe they are still finalizing the latest links and redirects internally. But another key point on their roadmap is the Binance Smartchain Integration. Thanks to the bridge from ERC20 tokens to BEP20 tokens and vice versa, tokens can be used and swapped on both blockchains.

The 17-person team spent no less than 4 years launching UBIX.Network. Different expertises have worked on this every day, up to the ecosystem that we currently know. It is still a very young project, but the biggest growth can be found in CEO Max Breus and CFO Aleksey Petrov.

Max Breus has been co-founder and CEO of UBIX.Network since its inception almost 4 years ago. It is remarkable that, according to his LinkedIn, he had also been co-founder of SilentNotary since January 2017, about 1.5 years before the launch of UBX. Max obtained his bachelor’s degree in applied physics &amp; † math at the Moscow Institute of Physics and Technology. This shows that he has sufficient knowledge in-house. Years later, he decided to do an additional study, namely Law. He graduated from the Moscow State Academy.

Aleksey, co-founder and CFO, and Max met during their studies. Aleksey also graduated from the Moscow Institute of Physics and Technology in 2003. Both men immersed themselves in the world of technology and blockchain and then used all their knowledge and experience to launch UBIX.Network. It will come as no surprise that Aleksey is also co-founder of SilentNotary.

UBIX.Network enables developers to create their own hybrid blockchain, which is fully integrated into a peer-to-peer network. This means without gateways. An advantage of this is that all decentralized applications (dApps) built on these blockchains must be able to integrate seamlessly with each other. Users and developers need only one central environment. These individual applications are then integrated into Ubikiri, the super application, allowing end users to use all possible available services.

Despite ambitious plans, UBIX still has a long way to go. At the time of writing, the network has a market cap of 16 million and has the potential to grow. This growth can only happen if they continue to improve themselves and, for example, bind partners. A low market capitalization is not an indication of a growth margin. Therefore, always do your own research before investing.