Do you often use the Ethereum blockchain? You have probably already noticed that you have to pay very high transaction costs. As a result, there are more users and developers who prefer to switch to another blockchain. Preferably a blockchain that essentially works the same as Ethereum, but without all the drawbacks. Low transaction costs, fast processing time and no scalability issues. TomoChain is a blockchain that solves these problems. In this article we explain what TomoChain is, how it works and where you can buy it.

TomoChain is a blockchain that aims to solve the scalability problems that other blockchains (such as Ethereum ) face. At the time of writing this article (April 2021), Ethereum’s network is having a hard time scaling. This results in users having to determine sky-high transaction costs in order to take advantage of the crypto projects that run on Ethereum. The number of transactions that can be processed per second is also ridiculously low.

The developers of the project have great ambitions for the project and if these come to fruition, TomoChain could well become one of the most interesting blockchains on the market.

TomoChain’s development team is quite impressive and has no reason to be ashamed of the competition. Let’s take a look at the core members and their backgrounds: 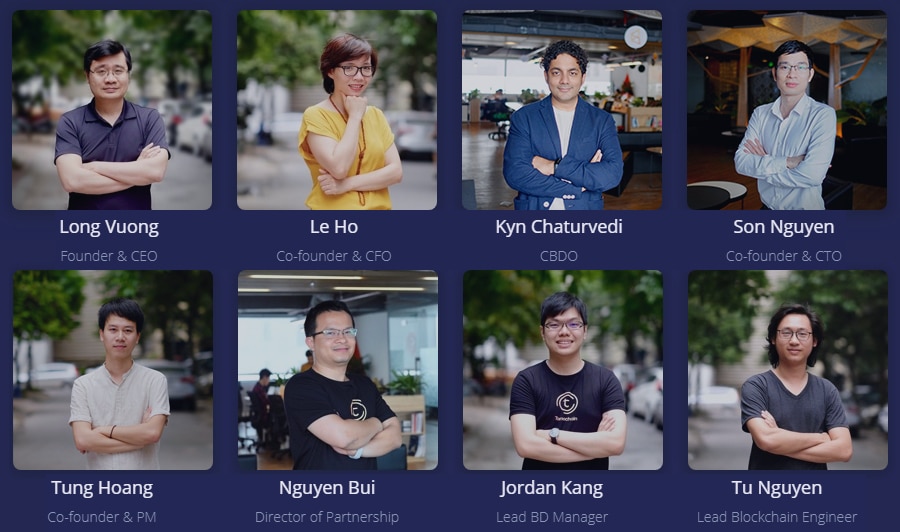 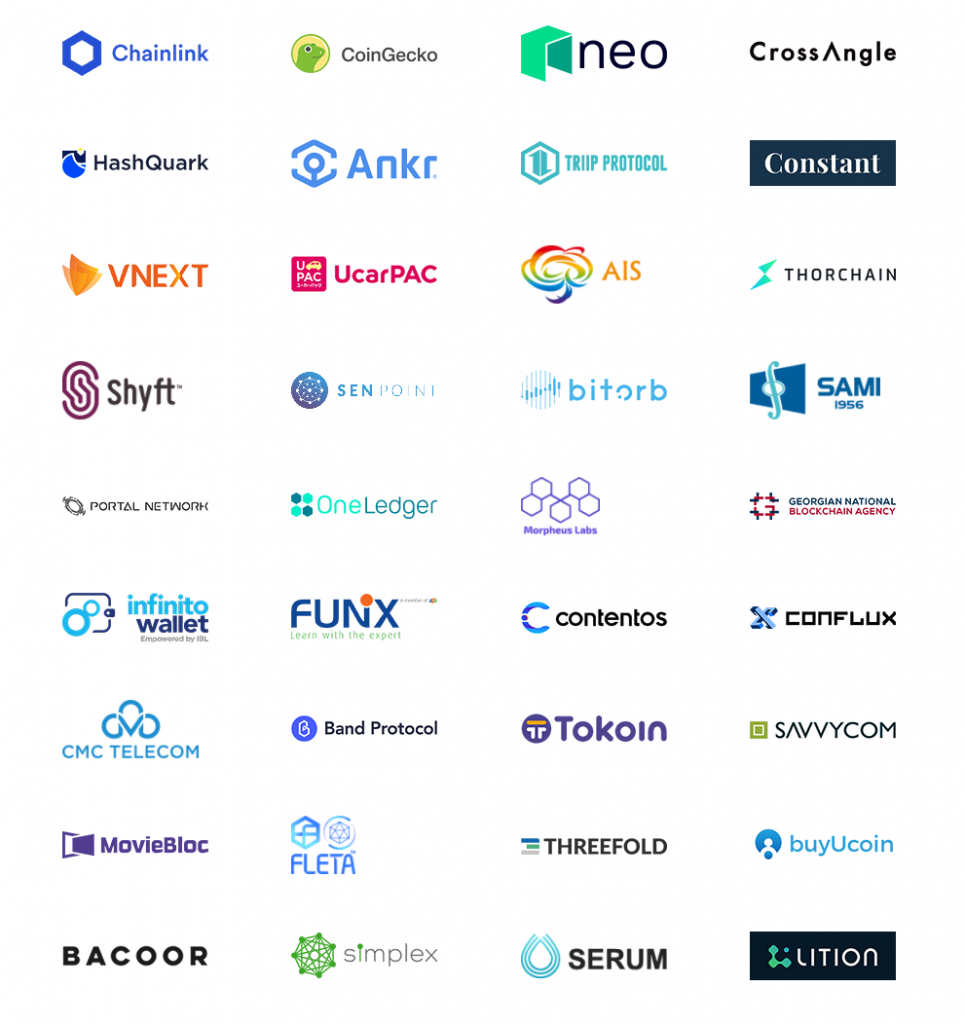 In addition to a strong team, partners often already say a lot about the project. But the partnerships are also impressive for this project:

How does TomoChain work?

As explained above, TomoChain aims to revolutionize the world of blockchain by providing a solution that would solve all current problems. To this end, the project is based on several objectives that we will explain point by point. 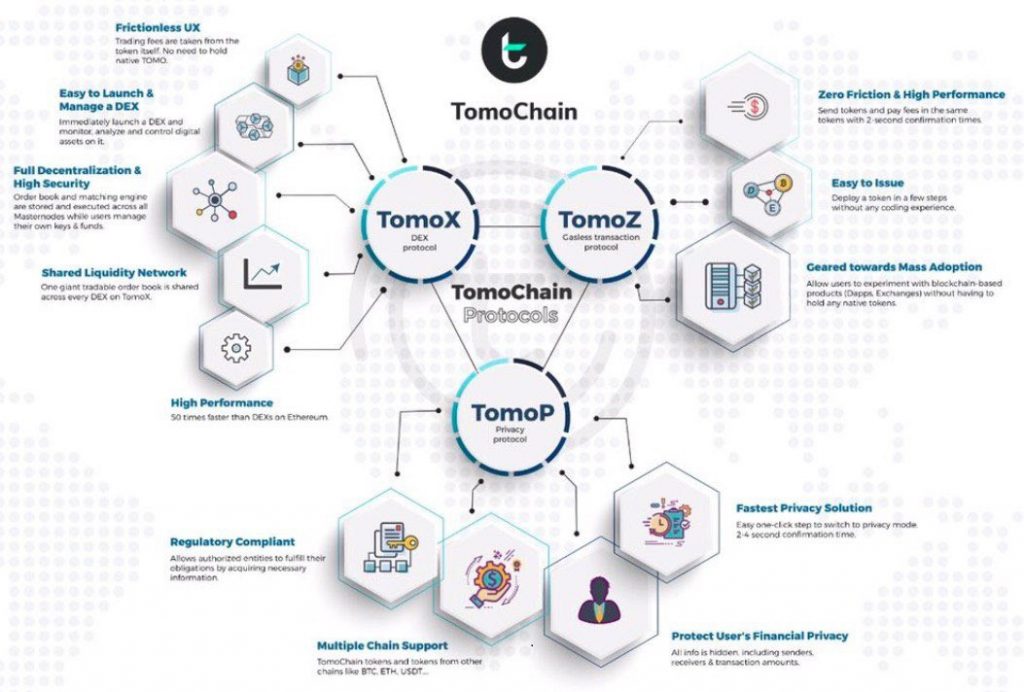 The two most commonly used consensuses today are PoW (Poof of Work) and PoS (Proof of Stake). PoW is secure, but uses a lot of energy to ensure the security of transactions and is slow. PoS does not offer the same security, but comparable guarantees with low transaction costs. TomoChain has decided to use a hybrid system called PoSV (Proof of Stake Voting).

There are many similarities between PoSV and other consensus systems such as EOS ‘ DPoS ( Delegated Proof of Stake ). In the hybrid system chosen by TOMO, double validation will be used to create, verify and vote blocks. This double validation in combination with a random selection mechanism reduces the chance of invalid blocks on the blockchain.

To avoid any risk of a fork, when several blocks compete with each other, the one with the longest chain will be chosen, as happens in PoW systems.

Masternodes create blocks and are rewarded with TOMO coins. To create a masternode, you must meet the following requirements:

When a person decides to vote for a masternode, he/she does so by sending TOMOs through a smart contract . The more TOMOs this person sends, the more rewards they will receive when a block is validated.

To verify that the masternodes are working properly, 3 criteria are taken into account:

If TOMO token holders are not satisfied with the work of a masternode, they can withdraw their vote and vote for another masternode. That way they ensure that only the best masternodes remain active.

Distribution of the reward

Every 900 blocks (also called epoch), a block “checkpoint” is created to distribute the rewards. Transaction validation signatures are counted from the previous epoch and rewards are distributed as follows:

Due to the transaction volume per second, which is much higher than that of the competition, the TomoChain network is ideal for using decentralized applications.

The big problem with dApps today is that they mainly use the Ethereum blockchain to function. Since this blockchain currently charges extremely high transaction costs, it is no longer an attractive blockchain for developers and users.

TOMO aims to eventually enable more transactions per second than VISA. If these goals are indeed achieved, TOMO could well become the number one blockchain for using dApps. The transaction costs are therefore much lower than with Ethereum.

TomoChain has decided that the programming language will be Solidity. This is exactly the same language that Ethereum uses. As a result, ETH smart contracts and ETH Dapps will be compatible with TOMO. Atomic swaps are also planned between these two cryptos.

But TomoChain doesn’t want to stop there. The project aims to allow the various existing blockchains to communicate with each other. This is called interoperability. However, it will take some work to make projects that use a different programming language compatible. But this is expected in the near future.

How do I buy TomoChain (TOMO)?

TOMO is available for purchase and exchange on a wide variety of cryptocurrency exchanges, including platforms such as Coinbase , Binance , Huobi Global, and Bitvavo , as well as the popular decentralized exchange Uniswap .

Despite the fact that it is for sale on many exchanges, it is not always wise to buy this on any arbitrary exchange. We recommend using Binance or Bitvavo. Why? Because these two crypto exchanges have high liquidity, which allows you to buy and sell TOMO for the best price. In addition, these two exchanges have already proven themselves in terms of security.

How can I store TOMO?

The safest way to store TOMO tokens is to use a hardware wallet . This is a USB stick on which you can store your cryptocurrencies outside the internet. The two most popular wallets are the Ledger Nano S and the TREZOR.

Since the TomoChain is an ERC-20 token, it is also possible to store TOMOs on wallets such as MyEtherWallet (MEW) or MetaMask Wallet.

You can also use the TomoWallet. This is a wallet which is specially made to store TOMO.

Is it smart to invest in TOMO?

Of course you would like to know whether it is wise to invest in TOMO. Unfortunately we cannot answer that. And we are not alone in that. It is important that you base your choice mainly on your own research, and not on what others say. But how do you do that research?

You can use a fundamental analysis . With such an analysis you look for all kinds of information about the blockchain and crypto currency. For example, you look at who is on the team of the project, how the project works and who the competitors are. Based on this research, you can then determine whether it is wise to buy TOMO at the moment. Of course you want to buy TOMO when the token is undervalued (meaning it is too cheap for what it could/should be worth).

It is also possible to carry out a technical analysis , in which you go deeper into the figures of the project. For example, consider the price. By recognizing certain patterns from the past in the present, you can make an expectation on what the price is likely to do. You also know whether it is smart to invest in TOMO at that moment.

We have already seen in this article the potential that this fairly new blockchain project called TomoChain has. The transactions can be processed quickly, the partnerships are strong and the founder of Ethereum can be seen regularly with the team. Everything points to the bright future of TomoChain.

The project has experienced some delays in the past, but they have always bounced back strongly. It therefore also looks promising. So if you are looking for a crypto project to invest in, TOMO could be a great option. Many analysts expect that this project could become the next Ethereum. However, it is important to keep in mind that there are also many other competitors on the market.