The rise of live video streaming platforms almost went hand in hand with the development of blockchain technology. The Samsung and Sony-backed Theta Network wants to make it cheaper for companies to share video content. In a digital age, the share of video content is increasing significantly, which is accompanied by the necessary operating costs for streaming this content.

What is Theta Network?

Theta Network aims to reduce operating costs for video streaming services such as YouTube . It works by reducing the load on the content distribution network by putting some of it on Theta’s peer-to-peer network. It’s a bit like BitTorrent, where people share video content with each other, but it’s the user who actually pays for sharing this content.

Theta Network aims to provide a decentralized video streaming infrastructure that is cheaper than the centralized alternatives.

Theta network participants are paid in native tokens for sharing video content with other users.

Hosting and sharing video content is a tricky business. The problem is that if the content is all stored in one digital place, it is a time consuming process for people worldwide to access this platform. Thus, video sharing websites will have to use multiple servers around the world so that they can serve the content much faster. This is also known as a Content Delivery Network (CDN).

But it is expensive to pay for a CDN. These services typically charge for the amount of data used, which means that when a video streaming site becomes popular, the costs will increase. This is where Theta Network aims to make a difference.

Theta Network is not trying to replace YouTube or the live streaming platform Twitch. Instead, it tries to provide a new infrastructure that is not only decentralized, but also much cheaper.

If you try to watch a video on a video streaming site that uses the Theta network, you will receive the data in a combination of two ways. Some of the video will be streamed directly from the site’s hosting platform, but you’ll also receive some from local colleagues who use the Theta network.

While Theta Network claims to be cheaper than centralized alternatives, there are still some costs involved – which is why the Theta tokens are needed.

Those who participate in the Theta network are paid for sharing video content with other users. The video sites pay for this service themselves, not the end user.

To pay for the data being streamed, the network uses a token called TFUEL. When someone shares the video content with someone else who tries to watch the video, the streaming site pays it in TFUEL tokens. It’s worth noting that these users don’t stream entire clips, just small amounts of data for each video, so the end user receives snippets of video data from multiple users and compiles them themselves.

Theta Network also has a second token called THETA. This is a governance token designed to help the community manage the Theta blockchain and determine its direction in the future. Currently, the governance element is still in its infancy, but the project plans to transfer more control to THETA holders in the future.

What is the Theta blockchain?

The Theta blockchain is fast and designed for smaller payments. This enables it to make payments in real time to reward content distributors for their efforts.

It achieves this through a proof-of-stake consensus mechanism, which is based on the Tendermint blockchain code. This mechanism involves users locking down large amounts of THETA in a process known as staking. Then they process blocks; if they process malicious blocks, they may lose some of their staked tokens.

But the blockchain has two levels. First, it has validator nodes. These are powerful computers that quickly process a large number of transactions. There are fewer of them and they are mostly run by companies that support the network, such as Samsung and Sony. They are the first line of defense to secure the network. Those spinning validator nodes need to stake 1 million THETA tokens.

Second, there are community nodes. These are managed by thousands of community members and they check and validate that the validator nodes are performing correctly. If a malicious block was somehow accepted by all validator nodes, these community nodes would stop it in its way. These nodes only need to stake 1,000 THETA tokens. 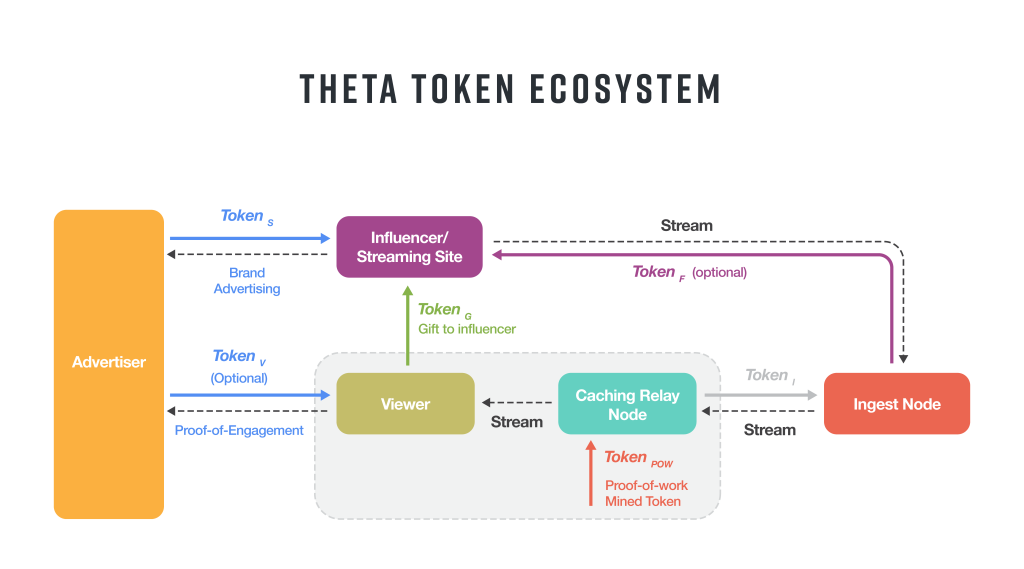 The company behind Theta Network is called Theta Labs. Run by CEO Mitch Liu, it has its own streaming site, Theta.tv, which pays viewers in TFUEL to watch video content (since they then share that content with other peers). The company has about 25 employees, based primarily in the San Francisco Bay Area, although it is looking to expand and recently opened an office in Seoul.

According to Wes Levitt, chief strategist at Theta Labs, the company currently has a nominal amount of revenue. While the Theta TV platform brings some revenue, it has nothing to do with the size of the Theta blockchain, he explained. Rather, the company relies on funds raised from its investors.

These investors include Samsung and the Sony Innovation Fund, along with a range of venture capital firms. As noted, many of these investors use validator nodes on the Theta blockchain. Four of these VC firms announced in March that they will deploy $100 million of their Theta tokens — largely acquired in previous investments when the token was cheaper — in a collaborative validator node. The company also has advisors from a range of mainstream media companies, including Steve Chen, co-founder of YouTube, Justin Kan, co-founder of Twitch, and Jonathan Wong, director of product at video streaming website Rakuten Viki.

Theta Labs has so far been awarded three patents from the United States Patent and Trademark Office related to its video streaming service, Levitt told Decrypt. The patents cover how the data is streamed over a decentralized network.

How does Theta prevent people from cheating the system?

One potential problem with Theta Network is the idea that someone can just use two computers and share video with themselves over the network and get paid for it. However, there are some safeguards that aim to prevent this.

For starters, the network doesn’t allow anyone to stream content to the same IP address. This avoids the basic example above. The network also has a few other similar restrictions, which can be fine-tuned by the video streaming platform depending on how strict they want to be.

Another important element is that those who share the video content cannot choose who they share it with. So if they tried to fiddle with the system and try to share the content with themselves, of course they would be sharing content with potentially thousands of other users. As a result, according to Levitt, they would actually do more good to the network than harm.

What does the future hold?

In the short term, Theta Network will upgrade to its Mainnet 2.0. This will upgrade the network and bring a number of benefits. The upgrade provides more support for edge nodes. These are nodes that download and share video content without the user having to watch the video. This is for people who want to support the network and earn TFUEL. Levitt estimated that a user could earn about $10-15 per month running a node full time.

Theta Labs also plans to introduce an NFT marketplace. NFTs are unique, digital tokens that represent a piece of digital content, such as art or music. The marketplace allows Theta TV content creators to publish their own NFTs and use them to interact with their viewing audience. Levitt noted that most of Theta’s partners in the entertainment world are trying to find ways to enter the emerging NFT market. That is, as long as the rising NFT market doesn’t pop.

The year 2020 was a challenging year in many ways, but like many, they were lucky enough to have their team working safely remotely. In this way they have kept the productivity of Theta high and the developments are better positioned, which translates into a favorable market!

With this solid foundation, they expect 2021 to be a period of hypergrowth for the Theta Network. All while continuing to move towards centralizing video and data delivery. Their roadmap for 2021 consists of:

As always, this roadmap may change over time and be re-prioritised with further developments, but it is a good representation of how the network will develop in the coming period. We look forward to seeing how the Theta Network develops in the future!

Who is the CEO of Theta?

After graduating from business school at Stanford, Mitch Liu founded 4 mobile advertising and mobile gaming companies. He co-founded Tapjoy, Inc. in 2007 and was the vice president from 2007 to 2010 and Gameview Studios, a pioneer of mobile resource management games in 2010, which was sold to gaming company DeNA of Japan. 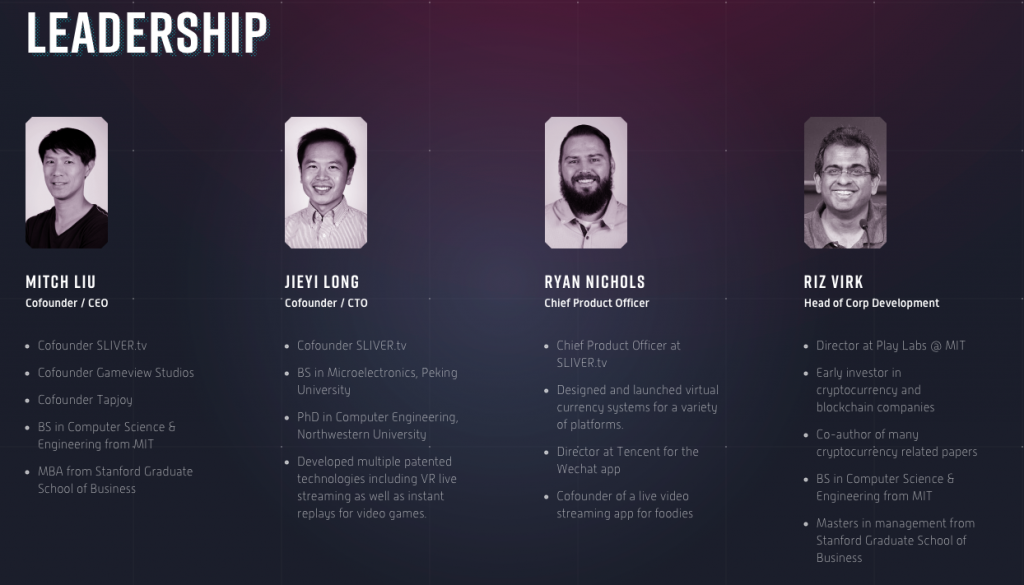 He founded Theta Labs in 2016 with the CTO Jieyi Long, the project focused on video streaming technology, mainly in VR and ESports. Theta Network was also created as a way to solve their problems in efficiently delivering 4k, 8k and VR video around the world.

He has supported the success of multiple consumer and online advertising startups through technology and marketing. He was Senior Director of Adteractive, a leader in the pay-for-performance CPA lead generation market, where he led the platform product management team responsible for four major vertical companies and more than $150 million in online ad revenue

Where can I buy THETA?

With a capitalization of more than 10 billion dollars, the THETA token is available on a large number of platforms, including: Binance , Coinmerce . We recommend that you use a major  crypto exchange , because the liquidity is a lot higher. You can therefore buy and sell the tokens for the best price on these platforms. It is also a lot safer to use, for example, Binance.

Theta Network is a fast growing cryptocurrency. The Theta Network has a growing community, more developers working on the project and is working on more partnerships. All of which means that more people and companies will use Theta Network. Which is ultimately very positive for the price in the long run. Forecasting the price forecast of Theta Network is very difficult, just like in the stock market. Because it is largely influenced by the market.

But by looking at the realized developments, new plans, new partnerships and other important matters that have an effect on the price, you can see where it can go. An exact Theta Network prediction price cannot be given, but it is certain that the project will have a nice return in the coming years!

Real investors are also quicker to look at a time frame of approximately 5 years, when investing is always the safest for the long term. Therefore, it is better to look at the Theta Network price forecast of 2025. Because in the short term there can always be obstacles, such as not meeting a deadline, but in the long term the project is always evolving. Many also believe that this project could easily go upside down 10 times, meaning that every $100 investment could eventually become worth $1,000 in a few years. In a digital age, we are curious what the share of Theta Network will be in the near future!