The internet brought us all together in one large international and digital network where the possibilities are endless. In the past, creating a virtual world was already a great success, let’s think of games like The Sims or RollerCoaster Tycoon. With the development of blockchain technology and the popularity of non-fungible tokens, this virtual and decentralized game world saw the light of day.

Blockchain technology continues to expand to other facets of society. The last trend we see in 2020 and 2021 is the arrival of non-fungible tokens and the further development of the game industry. If we consult platforms like CoinGecko, we can see all tokens based on a certain market segment. If we consult the gaming category, we see that the growth of all game-related coins has increased exponentially over the past period. With 25 coins currently in the list, we suspect that this list will get even bigger in the future.

What is The Sandbox?

The Sandbox is a centralized virtual world, created for and by the users themselves. This virtual world is built on Ethereum blockchain ( ERC20 ) where players can build, own land and monetize the SAND token, the main token in the decentralized platform. This is a utility token, these have a function within the platform. For example, players use them to make purchases in the virtual world. 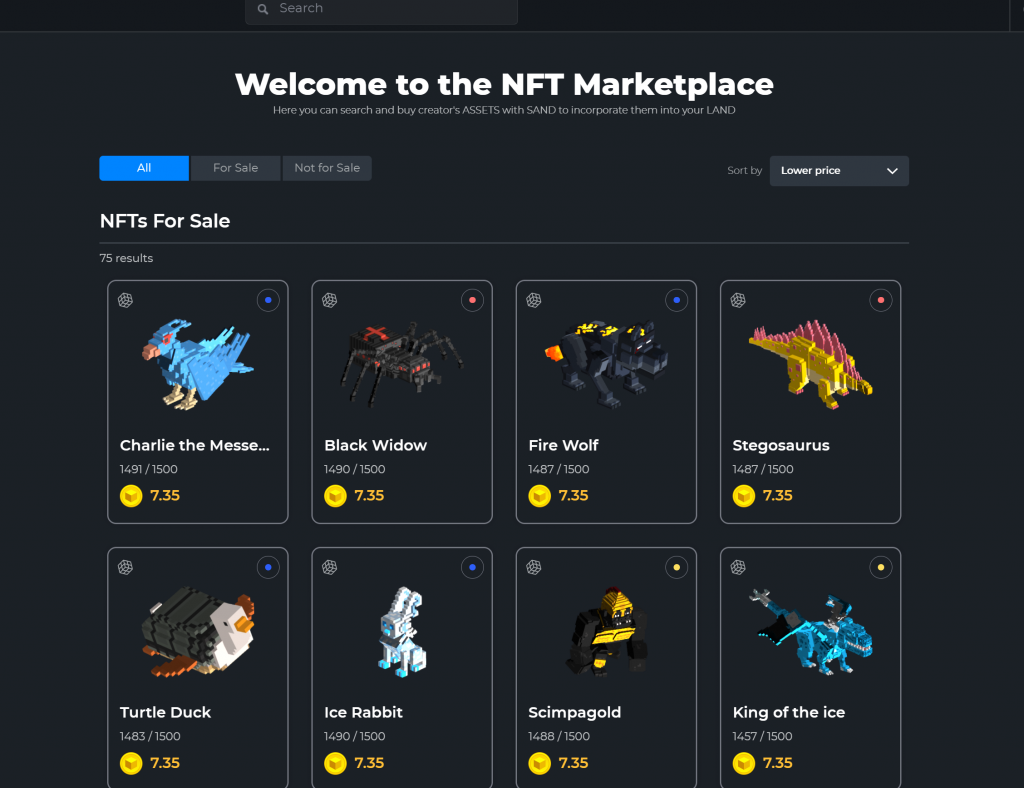 Players can create their own digital assets, better known as non-fungible tokens. These are unique creations within the platform that they upload to the marketplace to realize in-game applications in and for the platform. Currently, The Sandbox has over 50 partners including CryptoKitties. These crypto kitties were all the rage in 2017 when it reached an all-time high in the number of transactions. Cryptokitties works on the Ethereum blockchain where each CryptoKitty is a unique digital asset and owned by the user.

The Sandbox wants to focus on the further developments of gaming, this on blockchain technology. Through a decentralized nature, they aim to create a parallel digital world where players can buy, sell and even monetize land through these NFTs.

An additional application on the platform is the Game Makers, users can use it to develop and launch 3D games for free. This gives every user the opportunity to make their own creations possible in this virtual and decentralized world. Other players can purchase these games to use themselves. Users of the platform can thus also monetize their position. In the past, tracts of land have been sold for as much as 45 Ethereum, a current value of about 90,000 US dollars.

The Sandbox was already launched in 2011, very early when we look at the world of blockchain and technology. This launch happened via Pixowl, a mobile game studio. They have worked hard in recent years to continuously innovate the platform.

There is a limited supply of SAND tokens which is 3,000,000,000 tokens. In March 2021 we see that about 23% of the total supply is available. Of this total stock, approximately 25% was held in a corporate reserve and 31% was split between the founders and team members. 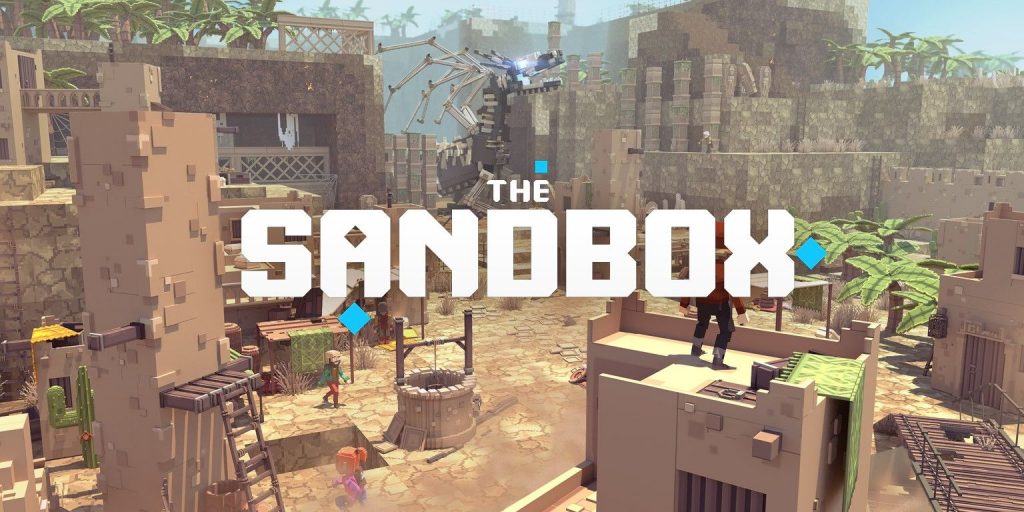 Games like MineCraft are extremely popular and The Sandbox capitalizes on this popularity by taking the gaming experience to the next level. These games are still centrally controlled. This means that a user can only realize what is made possible by the creators of these games. This makes you just a user and not part of an in-game platform. The Sandbox wants to give everyone user rights in a decentralized way. For example, they can help determine the landscape of The Sandbox by means of non-fungible tokens (NFTs) and also earn tokens with this.

Above all, The Sandbox wants to overcome all the limitations to date and demonstrate the possibilities of the gaming industry on the blockchain technology.

Sand token is the platform’s native utility token. This ERC20 token is essential to participate in this real-life gaming experience. It is built on the Ethereum blockchain and is used for all transactions ranging from land purchases to non-fungible token sales. In a decentralized network, the platform is regulated by the players themselves, so they can choose to develop games where you are rewarded with SAND tokens if you have completed certain levels. But the SAND token is also used to purchase additional gadgets that allow you to personalize your avatar.

Initially, the SAND token is the means of payment to buy your virtual piece of land. When you enter the platform, you are presented with a virtual map with lots of different plots. These parcels can then be traded in the network.

For an investor, staking is interesting because it is a way of passive income. You get more SAND tokens by making them available in a liquidity pool. 5% of all transaction volume executed in SAND tokens will be allocated with 50% to these staking pools as a reward for the investors who stake their SAND tokens. The other 50% goes to the ‘foundation’ of the platform.

The foundation aims to support the current ecosystem of The Sandbox. They also want to offer The Sandbox at trade shows to encourage high-quality content and game production on the platform. According to their official whitepaper, they have already funded more than 15 major game projects and awarded more than 100 artists to produce NFT on the platform.

In addition to the native token, there are other tokens included in The Sandbox. LAND token symbolizes the plot you own, which you have invested in. A game of VoxEdit can be built and developed on this LAND.

The platform rewards players who have a larger share, do you have more real estate and more SAND tokens? Then you have more options. This way you can influence the game yourself. It acts as a governance token where you can vote on the most important elements and developments that take place at The Sandbox. This is done by means of a DAO. Now you are no longer a user, but you are, as it were, part of the platform and you can contribute to the future of The Sandbox.

DAO stands for Decentralized Autonomous Organization. This is an open-source blockchain protocol governed by a set of established rules. These are created by a select few members and all run automatically without the involvement of an intermediary or central organization. The rules are laid out in open source computer code and are implemented automatically.

These program rules and the subsequent actions are recorded on the basis of a blockchain giant. This is done in a secure and transparent manner, where no fraud can occur thanks to the timestamp and distribution of the information to the network.

The biggest advantage of a decentralized network is that no central organization determines rules on the platform. This gives users the freedom to create what they want. With the help of a number of products on the platform, users of the platform can work with their creations in a simple and effective way.

The Game Maker is a free 3D software tool where players can unleash their creativity and build 3D games. User-friendliness has been deliberately taken into account, so no programming knowledge or experience is required and the system works with a simple drag-and-drop system. With this tool they can create a virtual world on their own piece of land that matches their wishes.

The Sandbox is interesting for users because it also has a revenue model. Not only can you develop your own non fungible token (NFT), but you can also offer it for sale via the in-game platform Marktplaats. It may just be that a player designs an NFT that other players are interested in, then these can often be sold for very interesting amounts.

Where the Game Makers focuses on a whole game development, VoxEdit offers you a software program where you can create and animate 3D objects. For example, think of tools and buildings or even animated animals, the possibilities are endless.

Of course you have several software tools with which you can model your own art. But what makes VoxEdit unique is that it is aimed at artists. This is made possible by the user-friendly interface and the powerful and simple tools that allow creators to create whatever they want. In addition to the creation process, they are also always in contact with the platform, where they can receive feedback. This stimulates them to create other things that could make life in this game platform easier for other users.

For the animation, VoxEdit’s system uses a certain hierarchy system. So the artist can manipulate everything on different levels. According to The Sandbox, it is the only Voxel software model where you can model and animate the digital assets. Once the entire construction has been created by the user, he can look for suitable animation by dividing his creation into a timeline. It works like a video editing software where you split the whole into different parts, so that you can adjust and edit each layer individually.

An important part of The Sandbox protocol is creating a circular economy for all participants. This concerns players, makers, curators but also LAND owners. By allowing everyone to interact with each other at different levels and also to conduct trade between everyone, the Sandbox maintains the circular economy. All tokens in the platform are all based on the ERC20 protocol, the Ethereum blockchain.

Decentraland (MANA) was the first virtual world based on the Ethereum blockchain where users could control the content and create applications, experiment with NFTs and also effectively monetize them. As with The Sandbox, Decentraland is, as the name suggests, decentralized. Via a marketplace, you can also create and trade your own non fungible tokens at Decentraland. The creation here is also done through an easy design tool to encourage as many users as possible to make use of the platform.

Unlike other platforms, Decentraland is not designed to run on multiple platforms.

We also have Enjin , another platform that focuses on blockchain games. Enjin’s ecosystem makes it possible to easily develop various games on blockchain platforms. Enjin mainly focuses on the development, management and integration of blockchain technology in games.

The Enjin team itself is fully decentralized. The contributors come from different countries and have designed more than 52 million blockchain assets to date.

Do you want to buy the crypto coin of Sandbox, SAND? You can do that on various exchanges. We recommend that you do this on a major  crypto exchange  such as  Binance  or Bitvavo . These exchanges have a high liquidity, so you can always buy SAND there.

It is also possible to buy SAND from decentralized exchanges (DEXs), although it is a lot more difficult to make a purchase here. Ultimately, we recommend that you choose Bitvavo.

Like the entire technological landscape, the gaming industry is developing rapidly. From popular games like FIFA to Minecraft, gamers are all looking for a unique experience. By allowing The Sandbox to operate in a decentralized ecosystem, users have the opportunity to help build the future of the platform themselves. Instead of an existing platform and an existing game, they can help design and develop at The Sandbox themselves.

The Sandbox has its competition, but the current ecosystem focuses on numerous possibilities. Think of the high level of creativity that each user has to design what he wants within the platform, but also the interaction. Gamers can play with friends on different platforms. The unique digital assets can also be sold via the Marketplace, whereby the user can earn a nice penny.