Rally is a decentralized network where content creators provide better engagement with their fans as well as more opportunities to manage their own revenue. All this without relying on individual social media channels. Creators can build their own community without the intervention of external platforms. This can range from digital entrepreneurs to brands and even celebrities. Anyone who wants a better affinity with his or her audience can use the Rally Network to make this possible on a decentralized and decentralized basis where the creator has full control over his or her community and his income!

What is Rally Network?

The advent of the internet has resulted in various new revenue models. Young people grow up with the opportunity to build a community on social media such as Youtube, Facebook and TikTok. Creators work hard on their content to grow their community to generate revenue this way.

Several content creators now have a generous income thanks to these popular channels, but it is more difficult for young content creators. Despite this, their revenue remains dependent on a third party, namely the social media platform. They determine the income stream and how much they earn per view, stream or like. This limits the creator’s ability to monetize their work. Using these platforms, with which they maintain and expand their community, is also an expensive investment. On average, they pay for this access between 10-20% of their income.

In addition, they are also bound by a policy that the platform determines for them. They have the power and control to take your channel offline, so that you lose your community and therefore also your income in one go. It restricts content creators in their independence, which affects engagement with their community.

Social tokens are gaining popularity thanks to the decentralized nature of blockchain technology. More and more creators want direct engagement with their audience without interference from third parties or external platforms.

A social token is a cryptocurrency that an organization, person or sports club uses to better engage with their fan base. What these individual tokens have in common is the governance functions. They give the community extra say and decision-making power over certain matters, making them even more part of the community. For example, you can reward fans in your native token when they share certain content or when you sign up for a newsletter. These social tokens are a win-win situation where both creators and fans can benefit.

The creative professions are often at the bottom when we look at the salaries. Musicians earn thanks to Spotify, because this is a good stepping stone for them to reach a worldwide audience. However, they also return a significant portion of the profits to Spotify. The same applies to Youtube and TikTok.

Content creators want decentralization and complete independence over the nature of their content, as well as the ability to better monetize their work. Only because of this are they able to build a better community, but they can also turn their passion into a good source of income. 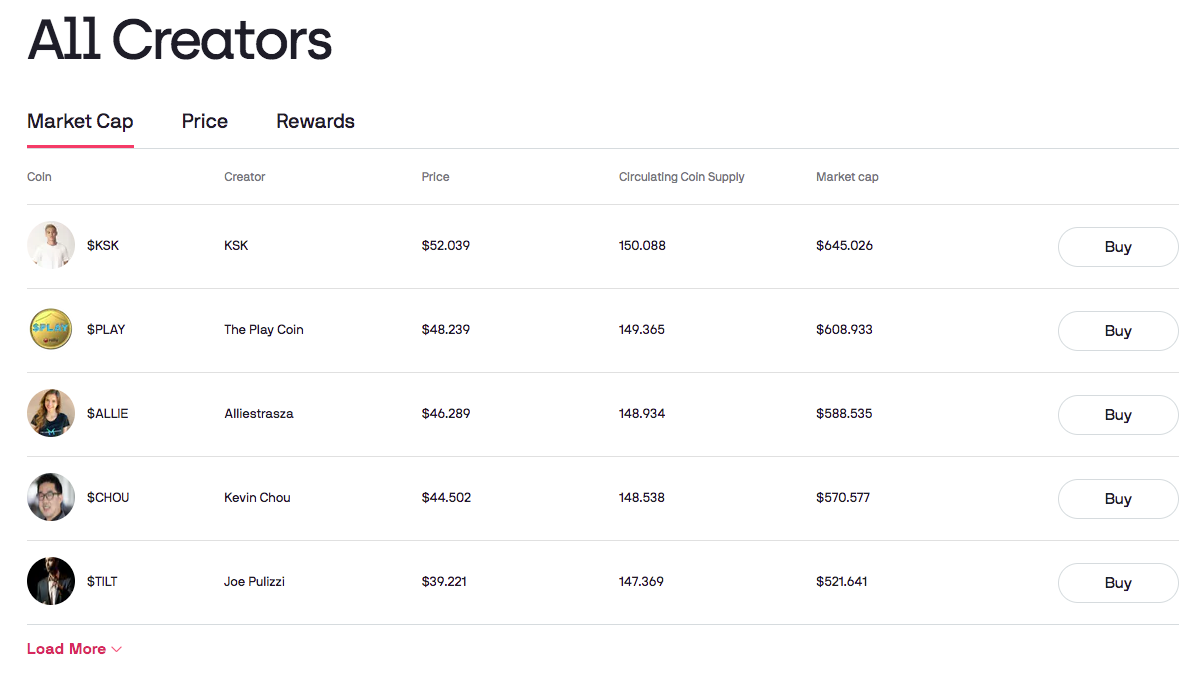 How does Rally Network work?

Rally Network is a network where every content creator can create his own token. This can range from artists, brands and even athletes who want to invest in their community. Currently, creators are having difficulties engaging with their fans and generating a source of income while doing so. For example, a musician may have 100,000 followers via Instagram, but these followers alone are not a source of income for him.

In order to give each creator a chance at their own monetary structure, they can launch their own currency in the network. How they do this is entirely according to their own vision. They choose what advantages fans have from owning a certain number of coins. Fans invest in this coin and as more and more people buy it, its value will increase. This is a significant win-win situation for the creator and fans alike.

A content creator can therefore also use this to distinguish in the community. This way you can reward super fans who have invested more than average. Let’s look at this with an example:

Bas is a promising guitarist eager to launch his own $BAS token in Rally Network. The team approves it and the coin is released. Bas is currently getting a certain amount of tokens. He can keep it as an investment or divide it as he pleases. Bas wants to make a great success of his own currency and tells his current community about the possibilities.

More and more fans are investing in his token and the price of $BAS is rising. But Bas wants to reward his top fans even more. With 10 $BAS tokens, fans get access to Discord, but with 100$ you can even chat privately with Bas. He goes even further and decides that for 1,000 $BAS tokens you can even get weekly guitar lessons from him.

In this way his community is even more involved in what Bas does and the whole community, as well as Bas, benefits from making this coin a success. Besides the popularity of the creator, the financial aspect is also a driver for the entire community. The more people who are part of the community, the more favorable this is for the price. Members of this community will also actively promote this Creator Coin, because a positive price development is also very beneficial for the entire network.

$RLY is an ERC20 token that enables community and token holders to participate in decision-making about the future of Rally thanks to its governance feature. This allows you, for example, to vote on the approval of new content creators on the network, new updates , etc. Creators Coins thus fall under the network of Rally and are thus dependent on the decisions of $RLY holders.

There is a maximum supply of 15 billion $RLY tokens. These were all minted in October 2020 during the Genesis block. These are released and distributed over a period of 8 years. Of this number, less than 30% is reserved for the team and investors. Only in this way can they realize a decentralized platform. 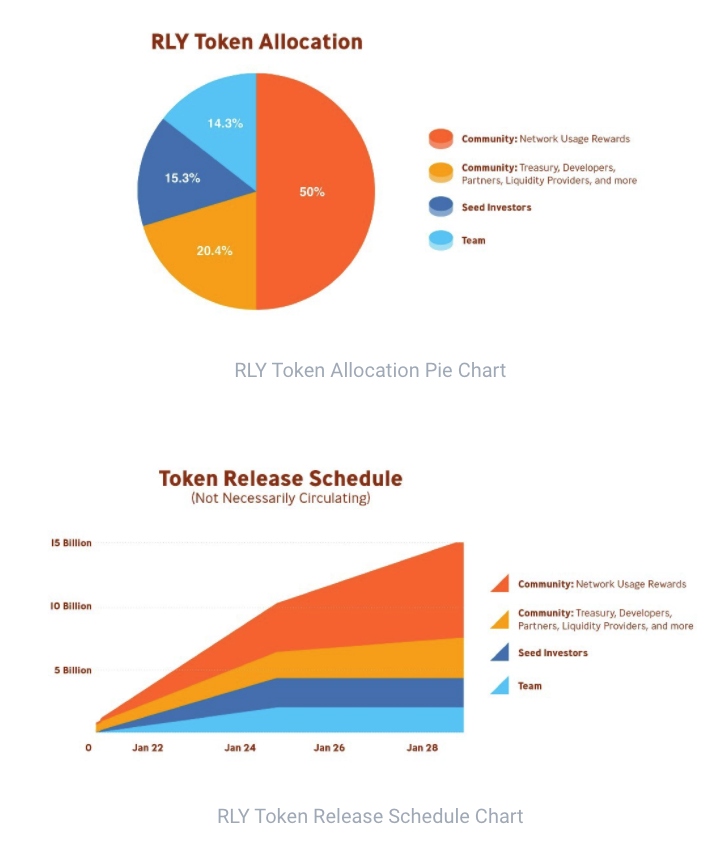 The Creator Coin is inextricably linked to $RLY. Trading of this Creator Coin is powered by Rally’s platform and hence the $RLY token. You can think of this as a base pair for all Creator Coins. For example, the demand for $RLY can positively affect the value of Creator Coin and vice versa. 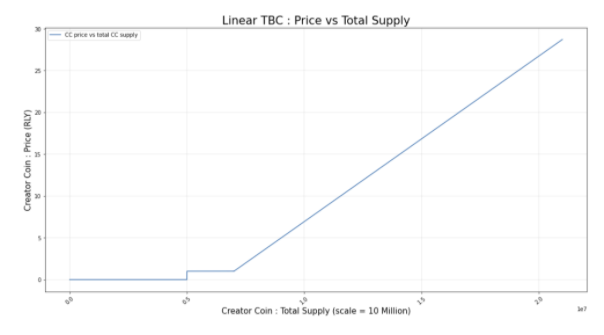 You can add liquidity with your $RLY tokens to receive additional rewards. 350 million of the total supply is earmarked for rewards for participating in liquidity pools. You can do this on Uniswap , among others . At the time of writing, it is only possible to provide liquidity with the Ethereum trading pair. As popularity grows and the protocol evolves, there is a chance that these capabilities will expand.

The power of non-fungible tokens is once again proven when you have built a good community. It is therefore possible that Content Creators can create their own NFTs and make them available to their own audience. This is all happening on the Rally Network platform:

To maximize revenue, they use a new buying technique. Sometimes it happens that an investor buys an NFT and takes it out of the community to trade elsewhere or just keep it for the long term. In The Rally Network you can use the ‘ always for sale ‘ option. This implies that an NFT is in principle always for sale, and can therefore be sold to the person who is most interested in this NFT.

Suppose you own an NFT with a current value of $100, which gives you access to a weekly call with the creator. But Mieke does not have 100, but 200$ for this call. In turn, it can purchase this NFT. This maximizes the content creator’s revenue stream and keeps the healthy competition going with the community.

It is therefore the creator’s final decision whether or not to use this always for sale feature. To ensure that the NFTs are sold at unrealistic prices, it also uses the Token Bonding Curve algorithm. This allows fair, yet competitive trade.

The team behind The Rally Network is very impressive. The co-founders have already proven in previous work how to start successful ventures to turn them into multimillion-dollar businesses.

CEO and co-founder of Rally is Kevin Chou. Kevin is also chairman of Forte, a blockchain that strives for a brighter future in gaming by investing in the economic relationship between the players and the developers of the game. Previously, Chou was also CEO and co-founder of Kabam, a mobile games platform.

Under his expertise, Kabam has grown into a company with over $400 million in revenue thanks to its more than 500 million players. Thanks in part to partnerships with, among others, Fast & † Furious and Hunger Games.

Li is co-founder of Rally and bears the title ‘head of product’. He directs the development of the product and ensures the proper implementation of applications in the network. Besides Chou, Li is also no stranger to the world of esports. As the co-founder of Gen.G, a global esports company that owns professional teams, Li has also proven his expertise.

Since September 2021 you can now also buy RLY on Bitvavo . Enter below how much RLY you want to buy on Bitvavo.

The development of blockchain is also often compared to the advent of the internet. In a relatively short period of time, the internet has developed at an unprecedented pace. For the younger generation, this revolution represents a new potential source of income. By using various social media platforms, they can monetize their content and monetize their own content.

Content creators are paid for using the platform to build their community. They get paid per like, view or per subscriber. But what many do not know is that these makers also pay a pretty high fee to the network. For example, they pay no less than 10 to 20% of their income to the platform, for example Youtube.

However, this platform also has another drawback. Despite being able to generate a source of income thanks to this platform, they are subject to a series of restrictions. For example, the platform has ultimate responsibility for the content of the content. They cannot express themselves freely and are thus inhibited.

The Rally Network originated from the ideology that every content creator should be given the freedom to express themselves in order to create content, without restrictions. All this in which he determines his own economy and can monetize his content. This makes the Rally Network possible through the Creator Coin as well as the ability to mint NFTs. The synergy between the Creator Coin and $RLY makes the Rally Network a platform that is very interesting for creators to use. They are back in full control!