If you’ve been following the crypto markets, you may have noticed a strange new cryptocurrency that just appeared in CoinMarketcap’s list. The strangely named Internet Computer (ICP) is a new crypto that has suddenly gone public. In addition, it is already the eighth largest cryptocurrency in the world with a market cap of more than $16 billion. This puts it in the top 10 of cryptocurrencies with the largest market cap in one fell swoop.

In this article we would like to explain to you what is going on with this strange crypto coin. We do this by telling you what it is, how it works and why it has suddenly become so popular. Of course we will also tell you whether it is smart to invest in Internet Computer and where you can eventually buy the ICP coins yourself.

Internet Computer, also known as Dfinity, went on to become the 4th largest crypto by market cap right after it came to the exchange before returning some of its profits. This is part of a larger blockchain project that has been running for five years and was developed by a Swiss nonprofit called Dfinity to extend blockchain to the entire internet.

According to the website Internet Computer, ICP touts itself as the third major blockchain innovation in the world, with Bitcoin and Ethereum as the first two. The idea is that Internet Computer would extend the functionality of the public Internet to include software hosting. While this may sound complicated, it’s easier to think of as a cloud network. Internet Computer is like a huge cloud network powered by a blockchain where programmers can create and host their own software, as well as smart contracts , right on the internet.

Instead of running software on your own computer, you can literally use this new “world computer” which is the Internet computer. While this may seem like a truly revolutionary idea, or even overly ambitious, many of the people behind ICP and Dfinity are experts in their fields. The scientists and experts in the organization collectively hold more than 200 patents and more than 100,000 academic citations.

The Development of Internet Computer

The project has received financial support from renowned venture capital structures such as Andreessen Horowitz and Polychain Capital. This with a total contribution that allowed it to be valued at more than 2 billion dollars at the end of 2018. All in a version that was quickly presented as part of the revolution now underway to improve and replace Ethereum. Accusations the founder has defended for years, explaining that “it’s not necessarily about being better than the Ethereum network, but about doing things differently. †

It is a development that will therefore ultimately have taken several years. It is a network that will certainly continue to develop, but currently relies on 48 independent data centers located around the world. Each of them manages a set of 1300 nodes. And with direct competition from the decentralized data storage market that is the Cloud. An industry in full evolution that is currently worth more than 370 billion dollars.

This Internet Computer Protocol is also based on a new programming language for smart contracts called Motoko. This has been called the “most powerful programming language ever created” for the area where it operates. So the team and creators of Internet Computer clearly have a lot of confidence in the project they have set up. This is also reflected in what George McDonaugh said:

“Since we invested in Dfinity back then (in 2018), its mission has been clear: to become the global decentralized supercomputer hosting the next generation of autonomous software.”

In addition to all this, an Internet identity will be introduced to serve the users. This will replace passwords and cryptographic keys that are considered impractical. All this will be achieved by assigning each user a unique number, which can be made public. This is achieved through the use of an electronic TPM chip which is considered tamper-proof. And where only one device needs to be authenticated to be authenticated on the entire network.

The founder of this project, Dominic Williams, also spoke out about the future of Internet Computer and what it can mean for the blockchain community:

“We see blockchain as a replacement for everything, and we want to create a unique public blockchain. A gigabyte of storage space on the Ethereum blockchain will cost you about $5 million, while on the Internet computer it will cost less than $5. So this is huge progress.”

The fact remains that Internet Computer has yet to realize this. They are very confident and think they are already there. However, you do not win from Ethereum by having a high market cap. You will also need to ensure that end users ultimately choose your product. That’s also what many people who criticize Internet Computer have to say.

Is it smart to invest in Internet Computer (ICP)?

Internet Computer is a perfect example of a crypto project that aims to become a serious long-term project rather than just a speculative coin. For this reason, in addition to the impressive team of experts at Dfinity, I think Internet Computer has a lot of potential as a long-term blockchain project.

As for the price itself, it’s hard to say. The fact that ICP managed to become the 4th largest cryptocurrency in just a few days after the IPO is incredibly impressive. For now, the sky is the limit, but I wouldn’t be surprised if Internet Computer manages to eclipse other cryptos like Tether, Cardano , and Dogecoin in terms of size in the long run.

Currently (May 2021) ICP tokens are trading at $134 per coin. It is not surprising to think that the price will continue to rise in the future, as it has also reached a value of $350 in the past.

However, it is wise to do your own research for these kinds of questions. You can do this with a technical analysis or a fundamental analysis. In this way you determine when the right moment has come to get in, and when it is best to sell the tokens again.

What is the cloud and how does it work?

The cloud uses the computing and storage capacity of several remote computers connected via the same network. Your data and also applications are then hosted in a “cloud” of computers and no longer on one or more local computers or, for example, on your own laptop. The internet is a good example of Cloud Computing, because the pages you visit are not stored on your own PC but on a remote server in a network with thousands of other servers.

Today, the cloud offers us advanced services (online software, data backup, etc. ) that can be used from anywhere in the world, as long as you have an internet connection. The Cloud represents a trend shift, rather than getting functionality and computing power through the purchase of hardware and software, we prefer to leverage computing power and storage provided by a provider through its web browser. 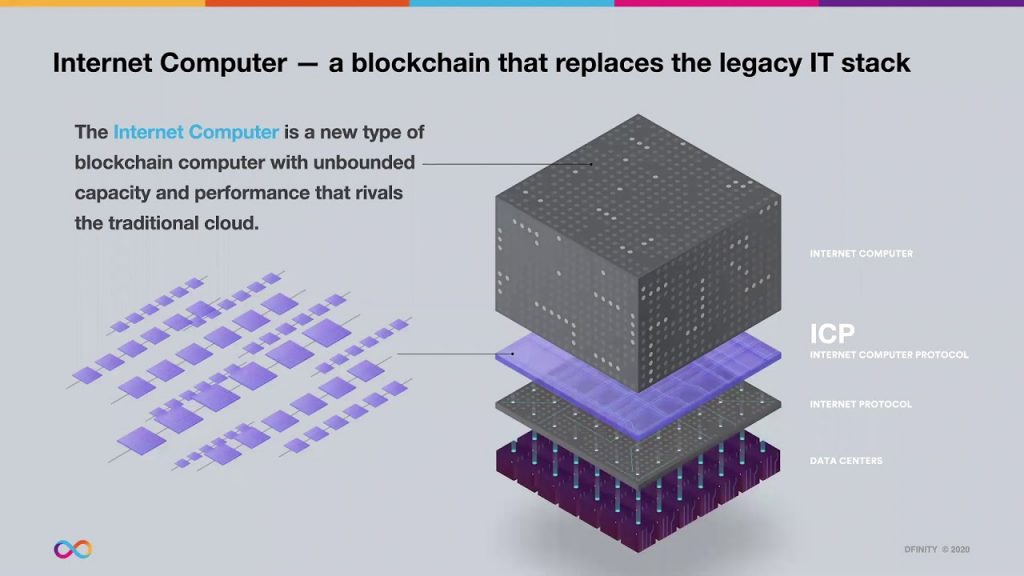 The launch of its Internet Computer Protocol was also an opportunity for Dfinity to create its ICP cryptocurrency. This has recently been due to a decline in value. An ATH (All Time High) of $700 was quickly registered in the beginning, after which it quickly went downhill with the value of this cryptocurrency.

At the time of writing, May 2021, the ICP coin is worth about $134, and currently the coin continues to decline in value.

All this with a total supply of just under 470 million coins. Making this PKI the proprietary cryptocurrency of this ecosystem, which will pay for the transaction fees users will incur. But also to participate in a governance system, the indispensable option of any effective decentralized network. This comes in the form of “voice neurons” that will eventually hand over complete control to the community. 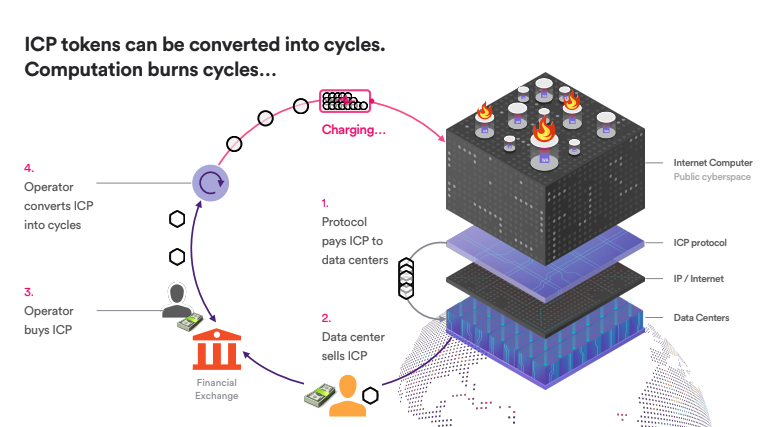 The price of ICP

Where can I buy ICP?

Do you want to buy Internet Computer’s cryptocurrency, ICP? You can do that on various exchanges. We recommend that you do this on a major crypto exchange such as Binance or Gate.io . These exchanges have a high liquidity, so you can always buy ICP there. In addition, these are also very safe crypto exchanges. The chance of things going wrong on these platforms is very small. Please note that the crypto exchange offers ICP. Because it is still a fairly new currency, it may not be available on every exchange yet.

It is also possible to buy ICP from decentralized exchanges (DEXs), although it is a lot more difficult to make a purchase here. For example, if something goes wrong on Uniswap or Sushiswap , you cannot go to a help desk or service desk. And the chance of things going wrong is considerable, because you have to go through many more steps. That is why we recommend that you choose Binance or Bitvavo.

How do you store ICP coins?

ICP is not yet a known currency, so it is sometimes difficult to find a wallet that supports these coins. Fortunately, almost all software wallets now support the coin. Think of the wallet of the crypto exchange you use. In most cases it is also possible to store ICT on a hardware wallet , although this will differ per brand and type of wallet. Therefore, take a good look at the supported coins of the hardware wallet that you use (or want to buy), so that you are sure that you can store ICT on the cold wallet.

If you want to go for secure storage, it is smart to choose a hardware wallet. This separates the crypto coins from the internet, so that the chance of a hack is many times smaller than with an online wallet that is linked to, for example, a crypto exchange. You then have to have faith in the security of the provider of the wallet.

We would like to briefly tell you what Internet Computer is and what the purpose of this project is. In summary, it can be said that the launch of the Internet Computer Protocol (ICP) of the Dfinity project aims to develop “another internet”. A solution as opaque as it is complex, based on mechanisms presented as innovative. This has been going on since 2018 and the start of its actual implementation. All by proposing a network of secure blockchain computers at the same level as today’s smart contracts, but based on computing power from the Cloud. This is to decouple the Internet from its current centralized form. And that’s quite a lot to do.

It is clear that the team is continuously owning with optimizing and improving the project. That is of course good for the project, and its users. Because when a project continuously improves, it can also adapt itself much better to the changes in the market.

We will discover in the coming months and years how Internet Computer will develop itself. However, the future looks rosy. Nevertheless, we recommend that you do good research into Internet Computer yourself, for example by using technical analysis or fundamental analysis. Based on your own research, you can then decide whether it seems wise to invest in ICP. Therefore, do not take any action based on the statements of others.