More people are using blockchain and crypto nowadays. And that’s not just end users, but developers as well. You see more and more developers developing and launching new dApps on the Ethereum blockchain. However, that is not always easy. The Graph is a blockchain project that developers would like to help developers with. They do this with the protocol they have developed, which we would like to tell you more about in this article.

What is The Graph?

The Graph (GRT) is a decentralized and open source indexing protocol for blockchain data. Developers can build and publish several APIs, called subgraphs, that run queries over the GraphQL protocol. We’ll explain later what a GraphQL is good for.

The platform can be used to easily search for Ethereum data through simple searches. So this addresses exactly the common problem that many other blockchain indexing platforms have.

Blockchain applications struggle to meet such attributes as finality, blockchain reorganization, and security in query fulfillment. The chart is intended to remedy this and other problems.

Through ‘subgraphs’, The Graph indexes blockchain data that users can access through the GraphQL API. According to the team, they will completely decentralize it in the future. At the moment they are not yet. More nodes will be involved and made responsible for maintaining the index.

Interest in the platform continues to grow. In June 2020, they reached more than a billion searches. That was around the time when decentralized finance ( DeFi ) was also getting a lot more attention in the media and at large companies. For example, around the same time, PayPal also indicated to add Bitcoin to their system.

The team at The Graph

Yaniv Tal , co-founder and CEO of The Graph, worked with his team to develop an indexing protocol to facilitate access to blockchain data. Tal and his co-founders had experienced first-hand how difficult it was to create new applications (dApps) on the Ethereum blockchain.

Thanks to their experience with applications, they learned that there was actually no decentralized indexing and querying software for blockchain. The problem then was that developers had to find their own way to collect data from various sources and transform it into actionable data. So that was actually not useful at all and easier for blockchain developers.

The mission of the platform that Tal and his team have developed is to create applications that do not require servers and to make Web3 accessible to everyone. This makes it much easier for developers and users to create dApps.

How does The Graph work?

To index Ethereum-based data, The Graph uses the “Subgraph Manifesto.” This refers to the description of a subgraph that contains data about smart contracts , blockchain events, and the process of mapping event data before it is all stored in the platform’s database.

The data flow of transactions, subgraphic manifests and the database follows a certain structure. It all starts with decentralized applications that add data to the Ethereum blockchain using smart contracts.

All this data contains a record of all events and transactions up to the point of finality. Then comes The Graph Node, which scans the entire blockchain database, collects new data, then filters out data relevant to users’ searches. To make indexing easier, it identifies every bit of information that answers subgraph searches.

GraphQL is the link between the blockchain data and the application that a user wants to deliver it to. After the whole process, users can finally view the results of their search from their applications. 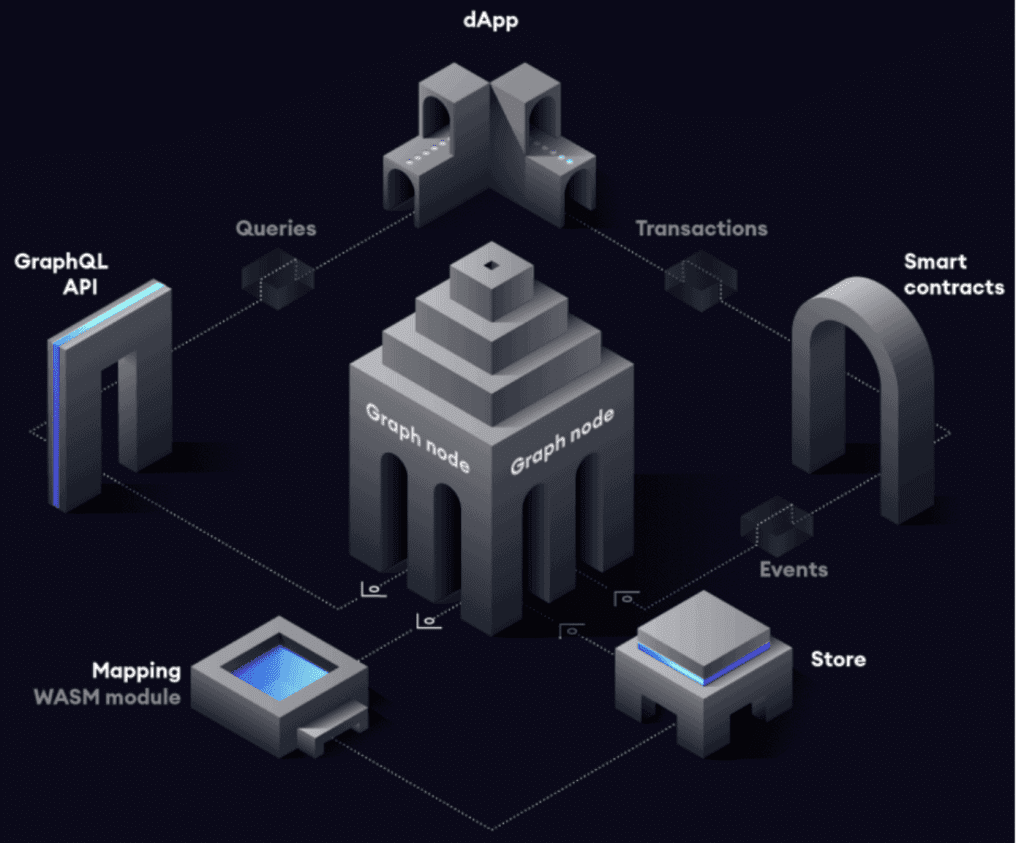 More than 2,500 subgraphs support the network

Recently, The Graph supports indexing data from Ethereum, IPFS, and PoA networks. There are more networks that the platform will support in the future. There are currently more than 2,500 subgraphs in use. Some of these applications include AAVE , Aragon , Balancer , DAOstack, Uniswap , Synthetix , and many others.

There is a lot of institutional support for The Graph’s network. Michael Anderson of Framework Ventures, said in a press release they “couldn’t be happier to support Yaniv and the team.” According to his statement, they are looking forward to helping the decentralized network and its growth.

Hayden Adams of Uniswap also shared how helpful the platform has been for their analytics needs and highlighted the need for The Graph’s use case:

‘As a company we do not manage or run our own databases. … At the moment it is quite difficult to get historical data from the Ethereum blockchain in an efficient way.”

The Graph’s long-term plan, in addition to expanding to other blockchains soon, is to transfer ownership and control of the platform to the community. This is also a response to the shift of many blockchain applications to a decentralized governance model.

Key features of the platform

The entire ecosystem of the platform consists of the following people: 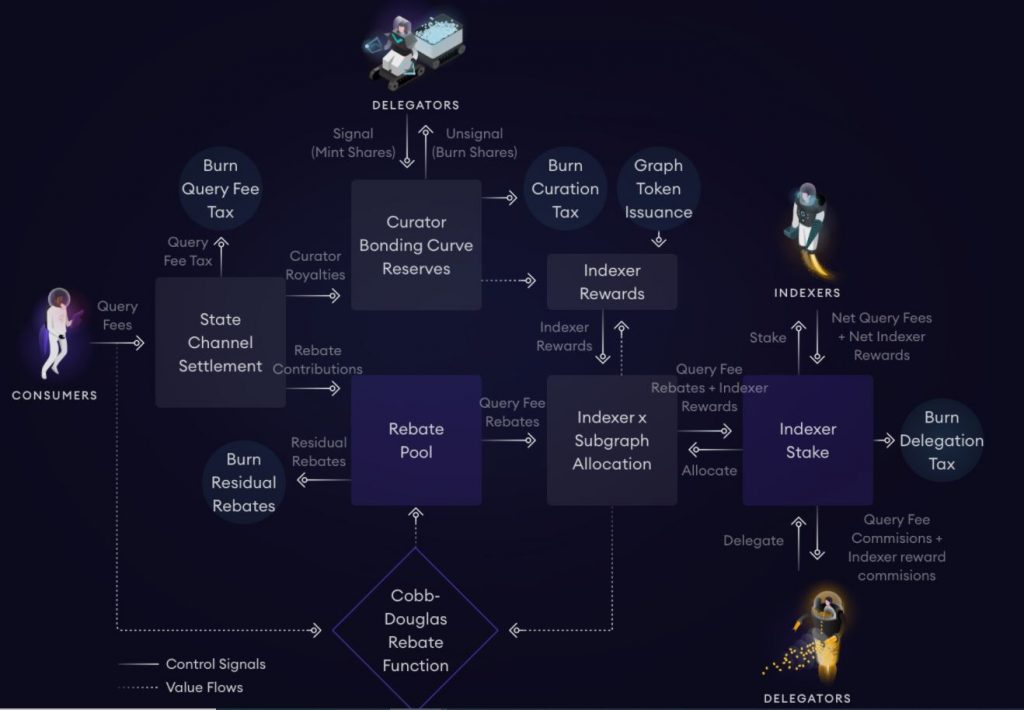 The Board of The Graph

The Graph plans to decentralize its management in the future. This will likely be similar to MakerDAO and Compound . Once the protocol is ready, the team plans to establish a Decentralized Autonomous Organization (DAO), which will empower key stakeholders to participate in key protocol decisions.

As with other DAOs, The Graph Council, which will be the governing body for the protocol’s technical parameters, will also be responsible for how The Graph Foundation allocates its native utility tokens GRT.

Its basic functions include decisions on granting and financing ecosystems, protocol upgrades, protocol parameters and other urgent decisions.

The Graph token (GRT) is a proprietary ERC-20- based token that can serve as a medium of exchange and as a reward for community participants who act as indexer, curator and delegator.

The Graph launched its mainnet on December 17, 2020 at 6:00 PM Dutch time. At launch, GRT tokens were distributed to all participants in the public sale. Members of The Graph’s curatorial program also received awards worth an initial $1,000, with the remainder distributed to them each quarter based on their contributions to the program.

The Graph Foundation also received approximately 20% of the supply of all GRT tokens for the future development of the project. In particular, contributors who want to help further develop The Graph can sign up for their rewards program. About 1% of the total GRT stock will be set aside to support these contributors in 2021.

Indexers who participated in the testnet phase also received a reward of GRT worth $10,000 to a whopping $100,000.

In order for users to buy shares in the nodes that run the entire platform and sell their services on the ‘query market’, they must deploy their GRT. In return, they receive financial rewards. If the indexers are malicious and, for example, intentionally modify data, there will be an expensive penalty in the form of taking their staked GRT tokens.

How can I buy GRT tokens?

It is possible to buy GRT tokens from the major and traditional crypto exchanges. However, we advise you not to do this at any exchange. We recommend that you choose Bitvavo or Binance , because these exchanges are much safer than other crypto exchanges. In addition, they always offer high liquidity, allowing you to buy and sell GRT tokens at the best price.

Of course it is also possible to opt for a decentralized crypto exchange , such as Uniswap or Sushiswap . However, there is always a big disadvantage to a DEX. And that is that you have to go through many steps before you actually own your tokens. As a result, the chance that things will go wrong is much greater than with a central crypto exchange.

How can I store my GRT tokens?

The Graph runs on the Ethereum blockchain, which means that the GRT tokens are ERC-20 tokens. You can store these tokens in almost any wallet, because most tokens use the ERC-20 protocol. You can easily and quickly store your tokens in the hot wallet of your crypto exchange. However, this is not always the best and safest choice. It is much more sensible to store your GRT tokens in a cold wallet, also called a hardware wallet .

The Chart Roadmap: What’s Next?

Now that the mainnet is launched, The Graph continues to build. The team has stated that the Graph Foundation will work to build a production-ready Graph Explorer dApp and Gateway, which should give all network supporters the right help at their fingertips.

The Graph is also open to individuals or third parties who want to help build the network. As mentioned before, anyone can apply for the scholarship program or collaborate with other members of the community. In this way, The Graph wants to ensure that as many people as possible benefit from the product they have developed.

Looking at the current trend in the world of DeFi, we can see how important it is for developers to have free access to blockchain data. Making the process faster and less difficult for everyone could impact the growth of the entire scene and its reliability, security and capacity. Unfortunately, we see that this is not going so easily and well. Many developers experience problems with this.

Everyone therefore saw the need to create an information bridge between applications and blockchain data. The graph offers a possible answer to this. Using smart contracts that rely on user data, The Graph has proven to be easy to use, cost effective and fast. The platform is seen as a promising instrument. Especially for those who want to develop more use cases for the blockchain.