As cryptocurrencies become more and more widely accepted, their interaction with e-commerce platforms should also become increasingly important. There are rumors that major online stores such as Amazon and eBay are investigating the possibility of allowing Bitcoin payments on their websites. However, Syscoin wants to completely bypass third parties and create a decentralized marketplace, in order to enjoy the benefits that blockchain offers.

What is Syscoin (SYS)?

Syscoin establishes itself as a global network, a distributed ledger, a decentralized database, and a blockchain . In addition, it is also a cryptocurrency, which is called the SYS coin. We will explain further in this article what you can do with this coin.

Syscoin offers a decentralized marketplace. In fact, it works the same as Marktplaats.nl, Amazon and eBay, for example. However, the big difference is that the data from this marketplace is not stored on a central system. It is in fact stored on the blockchain; a decentralized network consisting of several nodes. This brings several advantages. For example, there is not 1 company that owns all data. The users are able to have their own data.

One of the main goals of the team behind the project is to bypass middlemen and put control back in the hands of retailers. As cryptocurrencies become more widely accepted, their interaction with e-commerce platforms should also become increasingly important. It is rumored that major online stores and consumers, while eliminating the significant fees currently charged by leading e-commerce platforms.

The Syscoin team and partners

The project is led by Sebastian Schepis , who is both the founder and lead developer. The project is supported by the Blockchain Foundry. This is a technology development company and develops commercial blockchain. Within this project, this acts as a blockchain which is purely aimed at offering solutions for both individuals and companies.

Although Blockchain Foundry’s management team was not established until 2016, in 2014 it played an important role in the development of the Syscoin protocol.

How does Syscoin work?

Syscoin is built around a blockchain running on the SHA-256 Proof of Work model ( Bitcoin ‘s algorithm ) that allows tokens to be mined using the energy already spent mining Bitcoin .

Added to this is the compatibility with the Lightning Network for even faster transactions. The same goes for SegWit . This combination gives you a cocktail of speed and fluidity. In addition, the Syscoin platform uses a network of Masternodes as a scalable service layer and offers several advantages to the owners of these Masternodes.

However, Syscoin is a fairly old project. We already told you that Syscoin was created in 2014. It is not the case that everything that is old is immediately valuable. Especially when we talk about technology. That is why there are also people who are critical of the project. It would have the same disadvantages as Bitcoin.

Bitcoin, for example, suffers a lot from scalability. Because of its technology, the platform cannot scale up further. That is why the question is whether Syscoin can scale itself in the future. If it cannot do that, the users will also stay away.

Masternodes on the Syscoin network

When we look at the masternodes, we get a better idea about the fundamentals of this project. It makes us believe more in the network because it gives a lot of guarantees to the users. Syscoin provides the decentralization through a Masternode architecture. It is something that we encounter with several blockchains.

This is also a good opportunity to note that a third of SYS tokens are locked in nearly 2000 Masternodes. This is an important ratio that shows how much confidence the Syscoin community and participants have in the power and potential of the project (there is nothing worse than a Masternode-based initiative that does not generate support, bearing in mind that the robustness and resilience of this type of network largely depends on the amount of available, operational and active nodes).

Syscoin was launched in 2014 as a hard fork of Bitcoin. Because it has in fact adopted the protocol and algorithm of Bitcoin, it is also possible to mine in the same way, as it also happens with Bitcoin. This allows miners to simultaneously mine cryptocurrencies based on the same algorithm, and Syscoin is able to harness the power of pooled coins. At the moment, Syscoin already has a secure and stable network that serves as a solid foundation for the entire platform. That is also the reason that many users and traders choose Syscoin; they trust in this project.

The Syscoin platform not only provides a fully decentralized marketplace, but also includes a number of key features designed to enhance the overall ecommerce experience. For example, users have access to unlimited inventory, while retailers can resell other users’ goods and also allow their products to be resold for a commission.

The prices in the marketplace can be linked to fiat currencies such as USD, EUR and GBP, or to the price of BTC. The marketplace also includes an escrow feature that keeps tokens in escrow until the conditions of the sale are met. 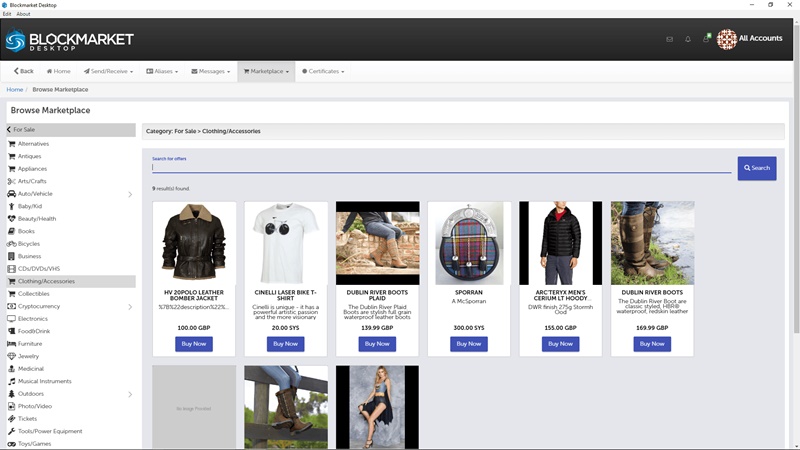 What is an Escrow?

An escrow is a financial arrangement in which a third party holds and controls the payment of the necessary funds of a particular transaction. It helps make transactions more secure by holding the payment in a secure escrow account that isn’t released until all the terms of an agreement are met.

Escrow software allows payments to be made when purchasing products on certain marketplaces with an escrow account in between. This guarantees that the item or service is delivered correctly and that it will be invoiced when the buyer agrees

Moreover, Syscoin offers almost free financial transactions. To take advantage of this low cost, users must make payments with SYS tokens. The platform also allows payments in Bitcoin and Zcash . However, in that case you cannot use the low transaction costs. You are then dependent on the transaction costs that you pay for the relevant crypto currency. The cost of Bitcoin has been quite high lately, so it can be very disadvantageous if you choose to pay with other currencies.

What are the expectations for this project?

Syscoin is an established project that has been around since 2014 and still has plenty of room to grow its user base. The project is diametrically opposed to centralized markets and allows users to sell anything directly on the Syscoin blockchain.

The team has developed a fully functional product and worked to integrate a number of features that make the platform a real alternative to sites like Amazon and Ebay.

Syscoin’s blockchain can guarantee 750 transactions per second (TPS) and is expected to go up to 300,000 TPS with a planned masternode release. The SYS token is one of the most affordable cryptocurrencies on the market right now.

These certificates can be authenticated using a cryptographic Proof of Work (PoW) consensus algorithm on the platform, opening the door to the widespread creation and exchange of digital assets such as certificates, ownership documents, receipts, event tickets, software licenses and warranties. .

Despite all these features, the project still needs to overcome a number of hurdles in order to be adopted on a larger scale. Currently, the leading mainstream marketplaces are very well known and it will take an extensive and lengthy period of advertising and marketing to attract users to the site.

Syscoin also competes with platforms like Shopify and WordPress (Woocommerce), which make it relatively easy for retailers to set up ecommerce sites. Syscoin not only has to fight for attention, but also has to deal with “internal” competition from other blockchain operations. For example, BitBay also works as a decentralized marketplace that allows trading goods and services without intermediaries. Newcomer Origin Protocol is also establishing itself in the world of decentralized marketplaces.

How can you buy Syscoin (SYS)?

Due to its great popularity, it is possible to buy SYS coins on many different crypto exchanges. Think of exchanges such as Binance , ByBit, Bittrex and Bitvavo . Make sure you buy SYS on a reliable platform. If you don’t, there is a chance that you will lose your money, or pay too high a price for the SYS coins.

It is also possible to buy SYS on a decentralized exchange (DEX), although this is a lot more difficult than on a normal crypto exchange . Because you have to go through many more steps, there is a greater chance that you will make a mistake. Because there is no party behind a DEX, it is therefore not possible to contact a helpdesk. That’s why we recommend that you do it on Bitvavo. You can do that within a few clicks.

How do you store CHZ tokens?

Since Syscoin is a hard fork of Bitcoin, the safest way to store your Sys tokens is a hardware wallet (also known as a cold wallet). These are electronic wallets in the form of a USB stick. The best-known and most popular cold wallets are those from Ledger. We definitely recommend that you store your tokens in a hardware wallet, because this is a lot safer than in a hot wallet.

However, it is possible to store your tokens in a hot wallet . Almost every online wallet supports Syscoins. For example, you can choose to store the coins in the wallet of your crypto exchange, but also on a software wallet such as MetaMask or TrustWallet. It is also possible to store SYS in a desktop wallet. However, this is not necessarily the safest choice, which is why we do not recommend it.

Is it smart to invest in Syscoin?

The price of Syscoin has risen considerably in recent years, but has also fallen. The price fluctuates enormously. This allows Syscoin to be a profitable investment. However, you will have to be sure that you buy Syscoin at the right price. If you don’t, there’s a chance you won’t recoup your investment.

Therefore, always do good research into a crypto currency before you decide to invest in it. You can do this through a fundamental or technical analysis . These are commonly used methods to determine the best purchase price of a cryptocurrency. In the same way, you also determine when it is wise to sell Syscoin again. After all, you also want to do this for the best price.

In the future, the team behind Syscoin plans to add more decentralized databases for data and file storage. The transaction speed must also be increased and new sidechains, application layers and identity layers must be added. All this should ensure that Syscoin can serve the wishes of the users even better. After all, that’s what it’s all about for the team behind Syscoin. These aren’t the only plans Syscoin’s team has. You can find more information about the Syscoin roadmap on the Syscoin website.

Syscoin is backed by a strong team that generally keeps its promises. The platform includes a number of features that will be valuable for the trade of goods and services. And that is necessary, because there is a lot of competition.

However, as Amazon, Ebay and PayPal continue to raise their rates and impose stricter regulations, soon online merchants will have no choice but to look for cheaper alternatives. So there is also a lot to gain for Syscoin. However, they must be careful not to make the same mistakes their competitors have made. This will only hinder growth.

Syscoin is a blockchain protocol that allows both individuals and businesses to trade goods and services, data and digital certificates securely and cheaply. We are very curious how this project will develop in the future.