We are all familiar with the internet. Otherwise you wouldn’t be reading this right now! We are also happy with the internet, because it gives us unprecedented opportunities to connect with all corners and parts of the world. You can do this through direct contact or with one of the search engines such as Google or Bling. But not if your partner already knows everything and you don’t even need Google, which is handy too. However, the internet as we know it was not set up with a strict plan in mind, but more or less happened. As a result, there are various problems with, for example, speed and privacy. That is exactly what Syntropy wants to do something about.

In this blog we will look at how Syntropy wants to tackle and solve these problems. A very interesting project . In a user-friendly way too! Let’s get started, take your time.

Please note: keep in mind that the text below about Syntropy (NOIA) as well as the explanation thereof should in no way be construed as advice. The choice for whether and in what way you want to trade (crypto) and which choices you make in terms of investment is up to you and you alone. We are not financial advisors.

This video explains how to build your own Syntropy stack.

Syntropy wants to convert the public internet into a secure and user-oriented internet layer. Think of a kind of second layer as you can also find on blockchains. Now, however, that layer has been added to the Internet. They want to achieve this by building and providing a connecting layer that already has all the coding and optimization built in. This is of course for everything and everyone who is connected to this connecting layer.

Their technology is fully compatible with the current internet infrastructure and all protocols. However, they add an important programming layer that allows all resources to be fully utilized. All current bottlenecks and limitations of the current internet are removed in this way. This gives you security and optimization right from the start and you have greater scalability potential. You can therefore more easily fit in future changes, technology and apps.

It should come as no surprise that Syntropy is an open source project. This ensures, among other things, that there is a varied ecosystem of applications. These applications can then be easily integrated into all other important systems that have a key role.

Of course, Syntropy is not the first to want to improve the internet. Also check out our blog about RSK Infrastructure Framework , about how they want to achieve this.

Why is Syntropy unique?

What makes Syntropy unique is that everything that is built on the current internet can also be built on Syntropy. The native NOIA token (more about the token later), allows this ecosystem to create its own decentralized economy. This is supported by the community that runs the nodes. This in turn encourages developers to build dApps and software on top of Syntropy.

How does Syntropy work?

Syntropy works through that their native NOIA token creates its own decentralized economy. In doing so, they receive support from tens of thousands of community members who run the nodes infrastructure. Developers now have the option to run their own dApps and software on the Syntropy layer. Bottlenecks of the current infrastructure are removed as a result. The internet speed can be up to ten times faster after that.

This is made possible by a smart router technology. It is also known as Decentralized Autonomous Routing Protocol (DARP).

https://www.linkedin.com/pulse/distributed-autonomous-routing-protocol-darp-william-b-norton/The image above shows how a DARP works. The schematic was created by William B. Norton.

This DARP ensures that the speed of the internet remains high continuously and that it is and remains safe. This is done by finding a smart route for the data packets via the blockchain . You have privacy via the blockchain and with an AI (artificial intelligence) algorithm that looks for the fastest way for the data. The Internet itself uses the Border Gateway Protocol, which simply finds the shortest route. Congestion or not, it doesn’t matter here. DARP, on the other hand, thinks for a while and then looks for the fastest way and then uses it. If you immediately feel the need to set up a DARP node yourself, you can find that information here , how to do it.

If you want to see what that looks like live, such a DARP, that is also possible. Look below for a screenshot of it.

How does DARP work?

A DARP actually works in a fairly simple way. Take another look at the image of William B. Norton and then we will explain step by step how this works. Don’t worry, we’re going to make this as easy as possible. 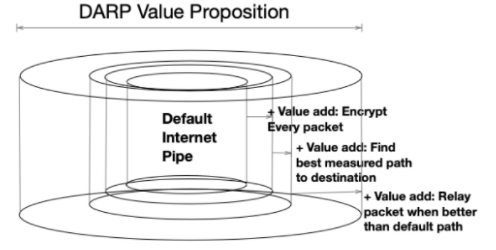 When a data packet is received by a node on the Syntropy network, it first sends a pulse packet or ping to other nodes on the possible route. If our node gets these pings back, it can calculate the fastest path through one-way latency. The latter is the relative delay of the data transfer or movement. Now that this data is known, the original node can easily choose the fastest route.

In the image below you can see how the new internet compares to the old, and how everything is integrated, thanks to Syntropy. 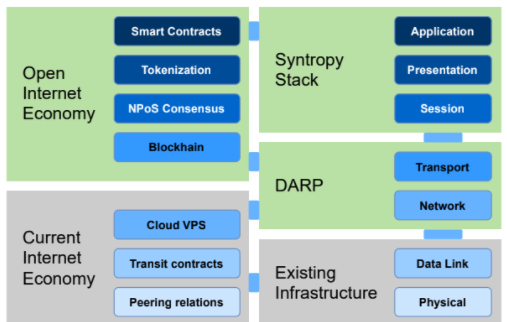 What does the Software Defined Network (NSD) do on Syntropy?

There is also cooperation with Syntropy’s Segment Routing, but even more important is the Software Defined Network (SDN) technology. This Software Defined Network technology controls the network and provides better performance and monitoring. It is now more of a kind of cloud computing than traditional network management. You add agility and flexibility to a network. Through a central control console, a network engineer can manage Internet traffic without having to use individual switches in the network. This way you can ignore routes that are clogged or have a low capacity or speed. Instead, you can take advantage of underused routes to get a faster internet connection.

The current Border Gateway Protocol used on the internet is, so to speak, ‘hardcoded’. That’s how it is and nothing else! However, with DARP’s technology, you get a programmable internet. With DARP you get a much more efficient internet while moving data and the most important phases of the data transfer are automated. Besides the fact that the route of the data is getting faster and better, the internet is also a lot safer with DARP.

Below, in this video, you can get a fairly extensive explanation from Jonas Simanavicius, founder of Syntropy, about how the network works exactly. Slightly longer, but very interesting.

The already mentioned security of DARP arises in the following way. During the ping, to check the delay in the network, each node also automatically creates a public and private key. This allows later contact with other DARP nodes in a secure mesh network. These keys are then distributed across the secure mesh network and instantly create VPNs. In this way you have encrypted internet traffic that also chooses the fastest route.

So you see that DARP not only makes the internet faster, which is great, but also a lot safer. The DARPs were still fully tested in March 2021, and the Syntropy Stack self-service went live in April. See the video at the beginning of this article for an explanation of the stack.

One of the first users of this stack was the Elrond network , but many are now using this stack. For example, a collaboration with Ethereum , Chainlink  and Polkadot is also integrated. 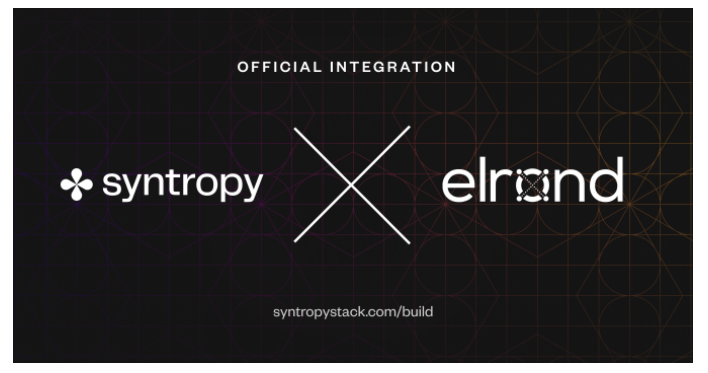 The NOIA token is Syntropy’s native token and is an ERC223 token, but it is also ERC20 compliant. This token runs the Syntropy project, because services and dApps that use Syntropy pay with NOIA for the services provided. These services can be paid for through subscriptions or for the amount of bandwidth used. The DARP nodes are paid in NOIA for their services, in order to find the fastest route. 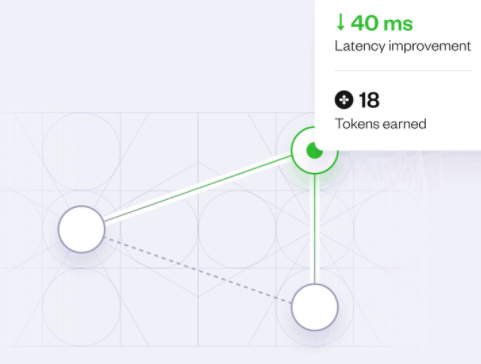 The image above shows schematically how a node finds a faster route and is paid for it in NOIA.

The team raised $6.6 million in the IDC (Initial Coin Offering). There will be a total of 1 billion NOIA tokens on the market. At the moment there is 39% in the market, according to CoinMarketCap there will be exactly 391,469,588.52 NOIA in circulation in June 2021.

It is possible to discontinue NOIA and then you will get yield (a kind of interest) back.

Where can you buy the NOIA token?

The NOIA token is offered on various major and minor exchanges. KuCoin and Gate.io are the most well-known central exchanges and Uniswap V2 and 1inch are well-known DEXs that offer the NOIA token.

What is the price of the NOIA token?

Where can you keep NOIA?

You can store your NOIA tokens online at the exchange where you bought them. Unless you are a day trader, however, this is not recommended, because an exchange can always be hacked, and then you lose your coins. You also do not have access to the private keys on a central or decentralized exchange.
A better option is to store the coins in an online wallet. There is MetaMask, Trust Wallet, Atomic Wallet or MyEtherWallet. On these wallets you do get a set of private keys, a row of random words, usually 12 pieces. 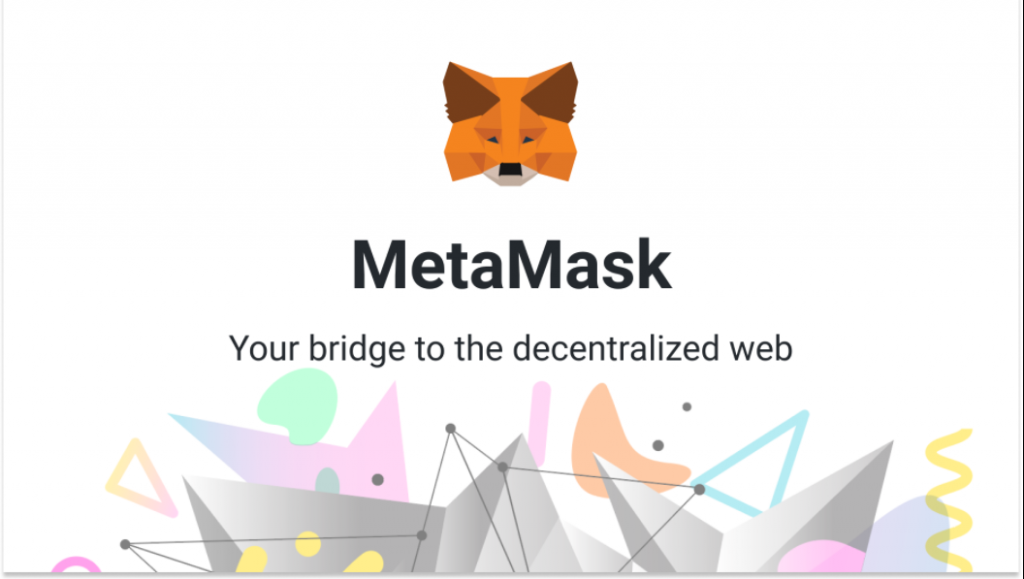 However, the best option is to store your coins in a hardware wallet such as a Ledger Nano X or S, or on a Trezor hardware wallet. Here you also get private keys, now a series of 24 words.
Be careful not to lose these private keys, as they give you access to your wallet should you lose it for any reason.
Make a few copies of your private keys and keep them in a few different but safe places.

Who is on the team behind Syntropy?

Syntropy was founded by a club of men consisting of William B. Norton, Jonas Simanavicius, Domas Povilauskas, Domantas Jaskunas and Justinas Valutavicius.

Jonas Simanavicius is co-founder and CTO. He has an extensive background in technical engineering.

Domas Povilauskas is also co-founder and CEO. His background is as a financial advisor.

Domantas Jaskunas is also co-founder and he is CEO. His background is also in finance.

Justinas Valutavicius  is also co-founder and has a background in programming.

We have seen how Syntropy can make today’s internet as we know it faster and more secure, through their DARPs. The advantage of their network is that everything that is built on the internet, you can also build on Syntropy without any problems. This gives you a decentralized, blockchain-powered second layer on the internet. It is precisely this second layer that makes it possible to find a faster route for the data packets. The internet could just be ten times faster. I have to say I like it!

Through their NOIA token, they have created their own economy on which their network runs. This in turn has advantages for everyone who works with Syntropy. The nodes are paid in NOIA and the developers pay in NOIA for the services provided.

Seems like a good idea having only started running live since early 2021 so definitely something to keep an eye on.