SKALE Network is a decentralized ‘elastic’ blockchain that aims to scale the development of dApps on the Ethereum blockchain. Because the blockchain is elastic, configuration is very easy and fast. A new variant of an existing blockchain can be developed in a simple way. In doing so, it retains the benefits of decentralization and eliminates development limitations that we see on other traditional blockchains.

What is SKALE Network?

SKALE Network is a decentralized and ‘elastic’ blockchain designed to scale Web3 applications. Web3 here refers to the development of dApps on the Ethereum blockchain where everyone can participate in their creation or use in a decentralized way. The goal of Web3 is to become the new internet.

The different chains on SKALE are configurable blockchains that exist one layer above the Ethereum blockchain. That is why SKALE is also an execution layer for the Ethereum network. These are specifically aimed at scaling, especially applications.

Developers can rent a SKALE chain each of which works as a private, Ethereum-compatible, smart contract platform. For example, by using sidechains they can process more transactions per second and it is a scalable model.

This configuration allows SKALE chains to execute smart contracts at all times , provide storage support, and execute rollup contracts. It does not implement an overarching Rollup approach on the Ethereum blockchain to accelerate transaction, but instead uses a network of mini-chains to execute these smart contracts. This method is also often referred to as dynamic sharding. Sharding is the principle where all information is not recorded on the linear blockchain, but via different sidechains. The advantage of this is that data transfer is faster and that more capacity is possible on the blockchain. They work independently of each other, with no dApp being delayed.

Thanks to the Ethereum Virtual Machine (EVM), which is located under the top layer of SKALE network, the protocol is able to apply machine learning algorithms. SKALE’s compatibility with EVM allows developers to use the same tools as when working on the Ethereum mainnet. They have access to the same applications of Ethereum, where they mainly want to achieve scalability and minimize transaction costs. By configuring an existing blockchain, the creation of a new blockchain becomes child’s play. Together with Ethereum, thanks to these new Web3 apps, SKALE Network aims to compete with traditional dApps in terms of performance, cost and capabilities.

Users pay SKALE tokens through a subscription model to access all the resources of the Ethereum mainnet. This includes storage, calculations , etc. They obtain this access in the form of an elastic side chain for a certain time. The protocol uses different subscription models, each with their own capacity and duration. Regardless of which subscription model a developer has chosen, everything works decentrally in one large network.

Connectivity to the Ethereum mainnet allows developers to access all the necessary software and tools to build their own dApp through these elastic sidechains. By using sharding, data transfer is done in a fast and efficient way. The different sidechains are secured by randomly chosen nodes that together form one strong network. 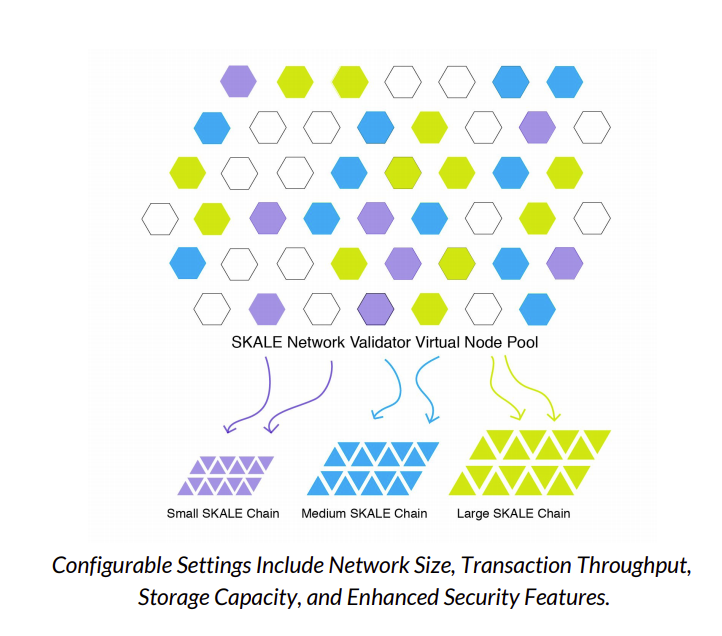 What problem does it solve?

Ethereum is one of the largest blockchains and many protocols are also built on this blockchain. A problem that Ethereum currently has is the problem of scaling decisively. SKALE emphasizes that this is not only about transactions, but that user experience must also be considered. Think, for example, of realizing API connections with different wallets and solving cost efficiency.

SKALE Network is an integral solution for this scaling. They focus on speed, security, interoperability with different ecosystems and of course the transactions per second. Due to its elastic nature, the blockchain is configurable and can approve transactions through these elastic side chains at high speed without the high transaction costs that we currently know. The main advantages here are the extremely low gas fees and increased transaction throughput. This allows both users and developers to find their way to SKALE faster and enables mass adoption.

SKALE Network is therefore a decentralized cloud for delivering and deploying low-latency elastic sidechains. Latency occurs when there is a delay in data transfer in the network. If we look at a traditional blockchain built linearly, the entire blockchain has to carry and process all the information that is added to the network. This is time consuming and makes the network slower.

All of these SKALE Network elastic side chains are compatible with Ethereum Virtual Machine (EVM) and are configurable in the source code. This allows existing chains to be copied endlessly with minimal adjustments. This includes network size, storage capacity, security and transaction throughput. This makes the development of dApps much easier, faster and above all, more scalable.

These elastic sidechains can also provide a large amount of additional on-chain storage capacity for these applications. Normally, storing information is expensive and takes up a lot of capacity. This data storage at SKALE is more economical and comprehensive, which means that developers have fewer barriers. This increases the possibilities for decentralized application. Think of use cases such as games, media and even applications in the world of (decentralized) finance. 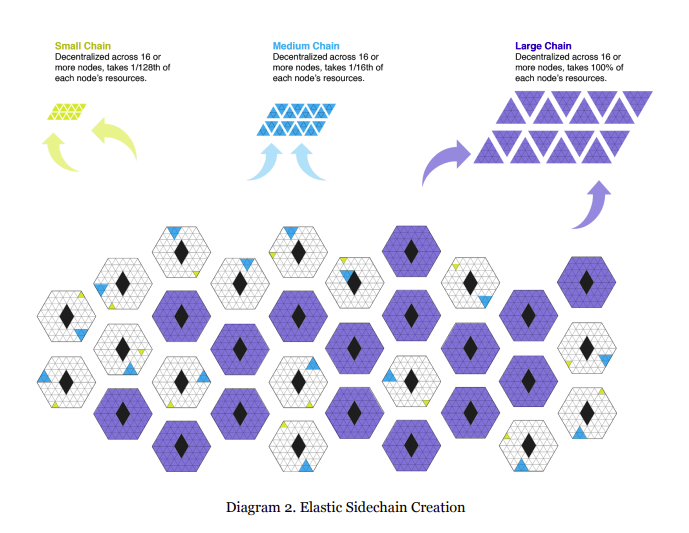 The main advantages of SKALE Network and the elastic side chains are the increased transaction throughput, fast completion of this transaction, but also the extremely low transaction costs. All of this directly affects the development of the user experience. In this way they want to create a sustainable model that enables adoption on a large scale. Because SKALE Network is located on top of Ethereum’s network, the Execution Layer, it is very effective to scale Ethereum-based applications.

Each individual chain uses the Byzantine Fault Tolerant (BFT) consensus mechanism and can communicate with other chains using a secure interchain protocol.

The BFT consensus tolerates that less than 1/3 of the nodes act insufficiently, maliciously or even go offline. In the event that this number is greater, the elastic sidechain will pause temporarily. It will only be resumed when there is a minimum share of 1/3 the active and well-functioning nodes.

The safety is realized by SKALE Manager contract. These are contracts that a pool of randomly appoints validators to validate transactions. This pool changes on a regular basis so that all nodes contribute to the entire network. When insufficient nodes are available or able to deliver quality, the Byzantine Fault Tolerant (BFT) protocol kicks in.

The image below shows the entire SKALE ecosystem in action. In the source we see that SKALE is an executive layer on the Ethereum blockchain, where all other components can be seamlessly integrated thanks to the elastic blockchain. Thanks to the integration of wallets such as MetaMask, but also the use of oracles and advanced developer tools. By adjusting this new elastic blockchain to your own wishes, you get a variant of the Ethereum blockchain that is unprecedentedly scalable. Unseen many dApps can be developed on this. The SKALE Network native token ($SKL) is a utility token that is used to enable the realization and implementation of dApps where security is central to the network. This is done on the basis of a Proof-of-Stake mechanism.

$SKL is an ERC777 token, which is an Ethereum-based token that is compatible with the popular ERC20 tokens. This means that all Ethereum applications with ERC20 support can also support ERC777 tokens.

The engine of the network is the native token $SKL which has several user functionalities:

SKALE Network has a total supply of 7 billion tokens, of which 4.14 billion was available at the network’s launch. The remaining tokens will be released over the next 12 years according to a fixed distribution: 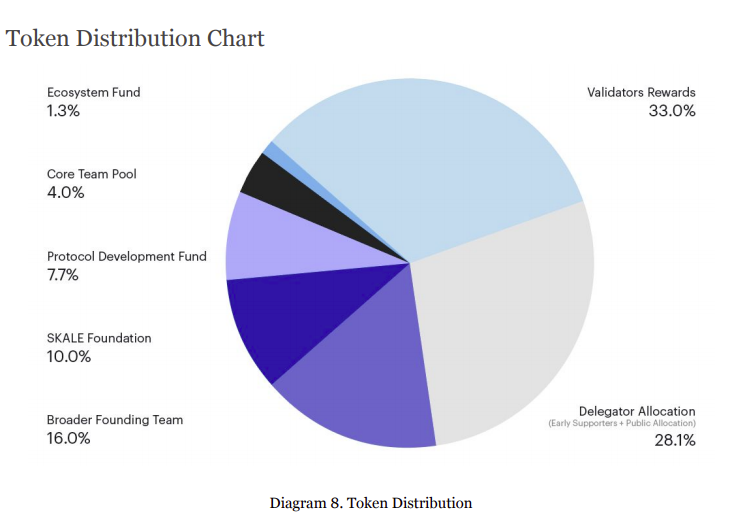 The year 2020 was marked by the launch of their mainnet. They did this through 3 different phases, with phase 1 being all about network launch and the others being about software releases.

April 2021 was an important moment for SKALE Network because of their Denali update. It expands multichain capabilities allowing developers to build independent chains that communicate with several other existing blockchains. These can be native chains or external chain services. An important advantage of this update is that the speed at which innovation is carried out in decentralized applications is increased.

Chains can now be independent, share the same set of validators and provide the same security, but can now do so with specific chains that use independently assigned resources and services. This makes even more possible than in its previous architecture.

Through mutual friends, Jack (CEO) and Stan (CTO) got in touch in 2017 when they were both looking for opportunities to start their own venture in the world of crypto. Both knew immediately that they wanted to take on the further development and scalability of decentralized applications. Pretty soon they came across the same problems that would hinder this growth.

SKALE was launched in January 2018, where Stan came up with the current architecture to realize scalability of these dApps. They soon received support from several major investors including Multicoin Capital.

In June 2020, SKALE launched the first version of its mainnet. It didn’t support staking capabilities or token transfer yet. Phase 2 of this mainnet was launched shortly afterwards, in October 2020, enabling, among other things, strike action. It was at this point that $SKL tokens became available on exchanges such as Uniswap and Binance .

SKALE Network operates out of San Francisco, California and now has more than 35 employees. 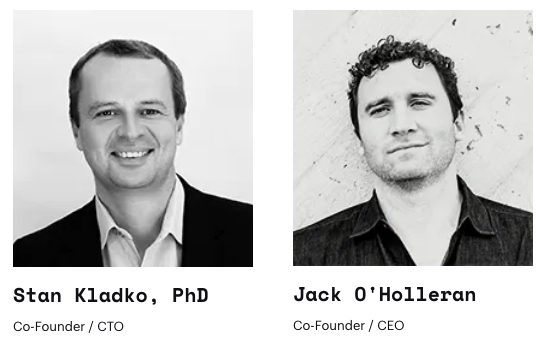 Scalability and the unprecedented high transaction costs are recurring problems when we talk about the Ethereum blockchain. SKALE Network has a very clear vision to tackle this problem in an efficient way, in order to enable unprecedented growth. As one of the largest blockchains, there are many other protocols that experience the problems of Ethereum. That is why there are already several projects that each want to contribute in their own way to tackle this lack of scalability. Think of Poolring, Loom Network and Polkadot . They each have their own approach and vision.

The goal of SKALE Network is now to ensure a high level of network adoption so that developers can develop their Ethereum applications with high performance and low cost at SKALE. As soon as this is possible, developers will create dApps on Ethereum faster, but users will also find their way to these decentralized applications faster. Currently, the costs are still too high, which means that many dApps are not successful due to insufficient users. It is the combination of this unprecedented scalability, cost efficiency and user experience that makes SKALE Network a protocol to watch closely!