Global sales in digital and creative offerings exceed $11 trillion. That’s more than all the agricultural products, money transfers worldwide and crypto markets are worth combined. Blockchain technology makes it possible to send digital currencies around the world without borders. Yet the digital world is still isolated, separated from each other by different protocols and platforms, each of which has its own standard. As a result, all money and liquidity remains with the intermediaries, such as Facebook, Instagram, Amazon, YouTube or Twitter. It is a complex and extensive supply chain. In addition, the creators, who ultimately maintain this chain, receive less and less. Less control over their digital assets, copyright or revenue models.

Please note: please note that the text below about ‘the Six Network (SIX)’ as well as the explanation thereof should in no way be taken as advice. The choice for whether and in what way you want to trade (crypto) and which choices you make in terms of investment is up to you and you alone. We are not financial advisors.

Here you can first watch a video showing how the Six Network works.

Six Network is a partnership between three digital media start-ups in South Korea and Thailand. In South Korea, it is the OOKBEE U Company Limited and Yello Digital Marketing Global PTE LTD and Computerlogy co.,ltd. have their origin in Thailand. Like Alpha Finance and Band Protocol  , the founders of Six Network come from Thailand.

With the Six Network, they want to create a new digital economy with blockchain technology and smart contracts , including DeFi. This means they want to create a fairer, safer, more transparent and efficient ecosystem for all those involved in the digital and creative economies. The project saw the light of day in March 2018.

Their mission and vision is to become the internet of digital services. They offer decentralized solutions for different types of transactions in the digital and creative economy. The vision is to return better liquidity, property rights control and wealth distribution to digital creators.

The Six Network is big in Southeast Asia, but it’s not that well known outside of that. It deserves this though, because it’s a project with good ideas.

In addition to the three parent companies, there are about forty other firms associated with these three firms, which are also part of the Six Network. These firms all contribute to the creation of the envisaged decentralized platform that aims to invent and set up a new digital economy. The advantage of this is that there are hundreds of top developers and technicians from various fields who can participate in the development of these plans. 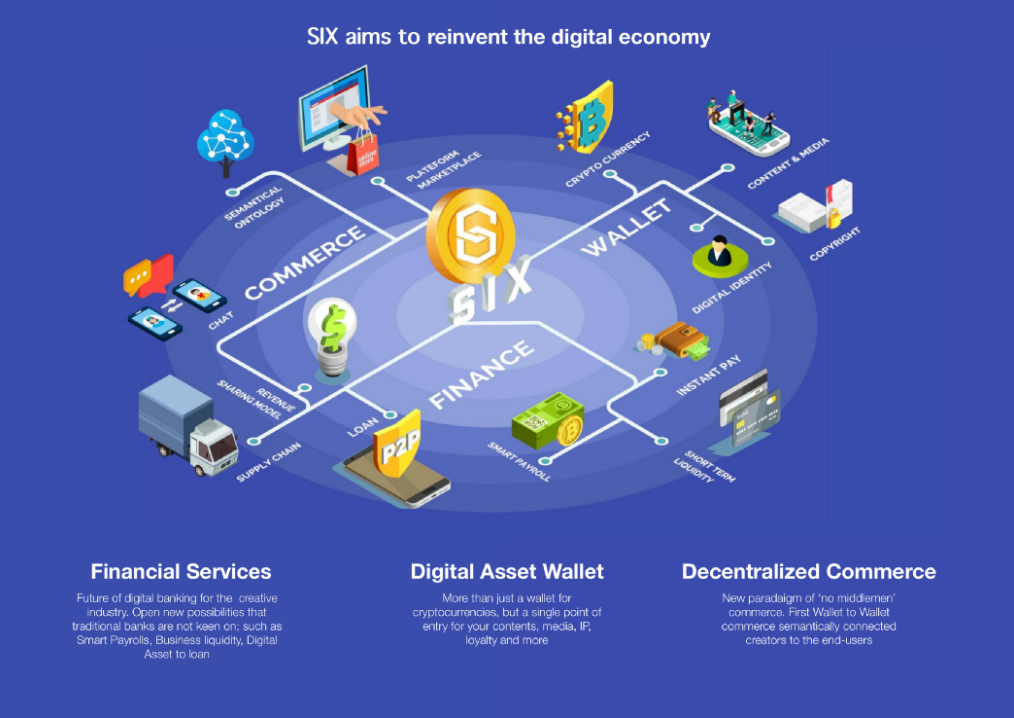 How does Six Network work?

This new digital economy that the Six Network wants to set up now has five projects that are already working.

What is the Definix platform?

The Definix platform is a crypto investment platform and runs on the Klaytn blockchain , a South Korean project. This is what you can find on it.

Definix also has its own stake-only token, the FINIX token. The token has three uses.

The following image provides a good schematic representation of Definix. 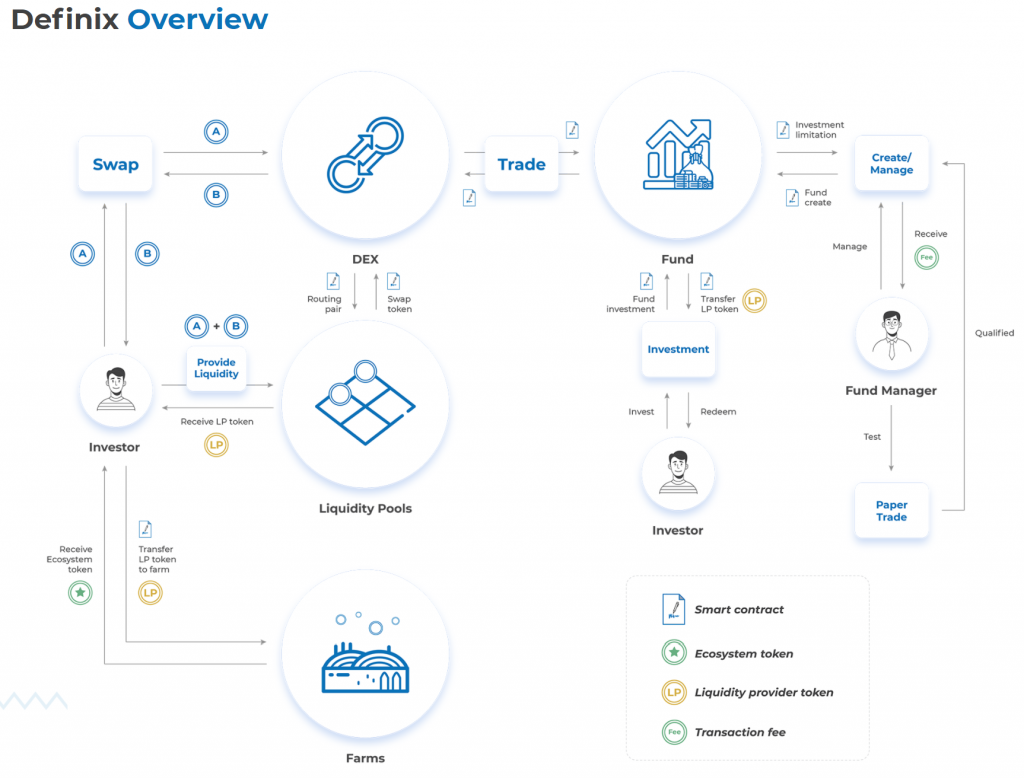 The following video explains what Definix is.

What is the SIX Bridge?

The SIX Bridge connects all applications of the SIX token . It allows you to move the SIX or FINIX tokens from the BSC to the Klaytn blockchain or the  Stellar Lumen Network . This is done with a ratio of 1:1.

What is Snap on the Six Network?

Snap is an app that verifies photos. It is checked whether the metadata of the photo has not been manipulated. It is an online virtual inspection platform. It works with the ‘capture-lock’ technology. This is a unique technology that uses AI (artificial intelligence). The composition of a photo is completely dissected. Date and time, location, the sun azimuth, the weather and the incidence of light are all taken into account.

This video explains what Snap is and how it works.

Echo checks the copyright on music or photos, for example, with blockchain technology, but ticket fraud can also be combated with it. This pays creators and artists their copyright. Once data is stored in the blockchain, this information cannot be changed and it is easier to verify copyright.

What is SIX Digital Asset Wallet?

The Six Digital Asset Wallet has several crypto currencies on offer. Each transaction on this wallet requires two codes, one from the app and one from the server. In this way it is almost impossible to hack this wallet, because no less than two codes would have to be bypassed. SIXR is a digital wallet with financial and lifestyle options that can be used on various partner platforms. You can also participate in games and earn SIXR, which can be exchanged for the SIX token.

This is also a decentralized wallet-to-wallet trading, where creators can interact directly with their audience and receive payments.

Who is on the team behind the Six Network?

The Six Network team is Thai and has a diverse background. I will briefly discuss the four founders and a few advisors here.

There are a few big names among the advisors. There is Bhurit Bhirombhakdi, CEO of BoonRawd Trading and director of Singha Corporation, the largest distributor of spirits in Thailand and Singha is also a beer brand.
Korn Chatikavanij is a former Thai finance minister. Akira Morikawa is the former CEO of Line in Japan. Phawit Chitrakorn is CEO of GMM Grammy Music, the largest music label in Thailand.

It is a strong team with experienced advisors.

What is the SIX token?

The distribution of the token is looking good, with an ICO that took place as early as 2018 and sold 47.45%. But 13% is for the team, which is also a good sign. Firstly, after three years you don’t expect a back pull, but it also shows that the team is committed and not just in it for the money. 10% goes to the three parent companies and 25% is designated as premium and reserve.

This distribution can be clearly seen in the following image. 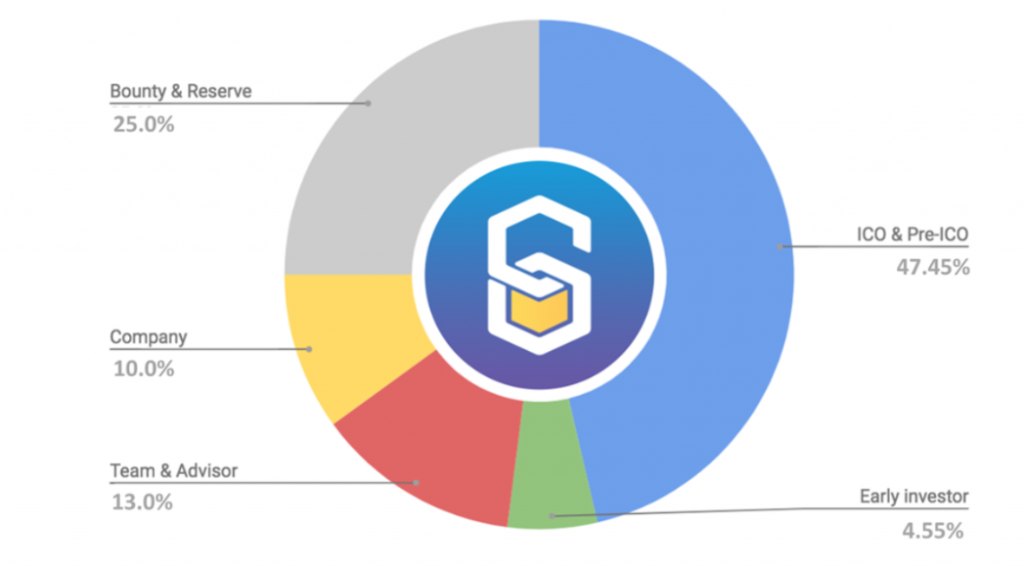 What is the price of the SIX token?

If you want to invest in the SIX token, a good start is to know its price. If you are already going to trade, you also want to make a profit. For example, you first need to know how a project works, what the goal is and who is on the team. By examining this, you are doing a fundamental analysis. However, you can also choose to make a  technical analysis  . In a technical analysis you look at the price figures of a crypto coin, to find out whether it is a good time to buy or sell SIX. This way you ensure that you minimize the chance of a loss.

At  CoinMarketCap  , it’s just outside the top 600 at 605. This coin has a good prospect I think, as it is booming in Southeast Asia and the project seems to be finally getting the appreciation it deserves. I think he could have a good price development. If you want to invest in this coin, it is important to do your own research because I am not a financial advisor.

Where can you buy the SIX token?

The SIX token is not yet for sale on Bitvavo  and  Binance . It is of course for sale at various Thai fairs, but we don’t get much out of that in the Netherlands. The CEXs that do have this coin on offer are Bittrex and Liquid.

What is the best way to store the SIX token?

You have several options to save this token. If you want to go for the safest storage option, it is best to choose a hardware wallet . As the name suggests, this is a wallet in the form of a USB stick. You can therefore completely disconnect this wallet from the internet. The moment you have not linked the wallet to a computer, it is impossible for hackers to get into the wallet. Of course you still have to store the wallet in a safe way. The most popular hardware wallets are from Ledger, the X or S version or from Trezor.

You can of course leave your SIX token on the exchange where you bought the token. However, now you do not have access to your private keys. The private keys of an exchange remain in the hands of the exchange itself. The danger of a hacked exchange is always there and then you have a chance that you will lose your coins. These wallets on an exchange are also called hot wallets .

The third option is an online wallet such as MetaMask or a similar wallet. Now you are in possession of the private keys and it is already a lot more difficult for a hacker to get to your coins. However, if you manage to lose your private keys, you will no longer have access to your own coins. You can no longer access your wallet. For example, if your computer crashes. These private keys are therefore important and you should keep them well, preferably in different, safe places.

Six Network is a good project that deserves to be better known than especially in Southeast Asia. The project has several good ideas and they give creators a warm heart, so that they have a better chance of a fairer and better financial future. There is a strong team behind this project which in turn has a few impressive and experienced advisors.

The price of the SIX token took a bird’s-eye view in November 2021, but collapsed again in December. It is quite possible that this token will attract again. Since I do not give financially, it is important to do your own research if you want to invest in the SIX token.