Technology is becoming increasingly important for the world we live in today. You see more and more that traditional resources are being replaced by technological masterpieces. Artificial intelligence, also known as AI, is one of these modern gadgets. And that is exactly what the crypto project SingularityNET is doing.

In this article, I will explain to you what SingularityNET is, how it works and what the AGIX token is. I do this by telling you at which exchanges you can buy the token and how you can store it. Enjoy reading! But first watch this video below.

What is SingularityNET (AGIX)?

SingularityNET is a full-fledged decentralized artificial intelligence (AI) network with an AI-as-a-Service (AaaS) marketplace. The Netherlands-based project aims to further develop and deploy AI, and has partnered with companies such as Domino’s Pizza. AGI is the cryptocurrency token used by SingularityNET.

AI is an umbrella term used to describe a multitude of technological developments, from chatbots to home automation, deep learning, machine learning, etc. The AI ​​market is expected to be worth $191 billion by 2024, according to analysts from Market Research Engine .

Despite our general lack of nuanced understanding, the legitimate uses for technologies like AI are growing exponentially. Chatbots, for example, are expected to handle 85% of customer support interactions, and Juniper Research estimated that 2.5 billion voice assistants (Alexa, Siri, etc.) were in use by the end of 2018. (Yes, billions.)

Of course, AI also has its dark side: Deepfakes are gaining ground after the media. Jordan Peele and Joe Rogan Deepfakes have stunned the internet. Deepfake.org is closed, but revolutionary software like Deepfake is online forever.

SingularityNET still wants to strengthen this market, same partnership with Deep BrainChain (DBC) , a similar AI project on the NEO blockchain . In 2019, it expanded its partnerships with Chinese insurance giant and asset manager Ping An and fast food giant Domino’s Pizza, Inc. help streamline operations in Malaysia and Singapore.

These high-profile partnerships have helped to place the project in the top 100 cryptocurrency projects. And that’s not all; This startup also launched an accelerator called X-Lab Blockchain AI in mid-2019.

This blockchain-based computing company is optimistic, but it is not without competition, such as Deep BrainChain and the EOS -based Effect_AI (EFX). Therefore, we will take a deeper look at the project by examining the AGI token, SingularityNET’s proprietary ERC-20 token, as well as its performance in the crypto currency market.

The purpose of the platform

SingularityNET aims to decentralize this corporate-dominated area and make it accessible to a wider range of people. The platform will allow developers to offer and market their AI tools and benefit every member of the community.

How does SingularityNET work?

Taking Deepfake as an example, the program just needs as many photos as possible taken from the widest possible angle to turn the face in a video into another person’s face. In this case, the images would be loaded into a smart contract by a seller and the developers of Deepfake would be buyers seeking image data to fine-tune their process. On the other hand, Deepfake could then become a seller of its AI-powered service.

This open, two-way market relies on smart contracts to facilitate interactions, and agent nodes on the network create a trust network to verify and process transactions.

Agents trust each other on a simple scale of 1 to 0, and the sum of these scores is averaged using AGI token staking and other factors to determine trustworthiness at scale, even with automation.

As the platform evolves, the team hopes to create a large-scale, AI-powered network that can easily handle the most complex engineering processes. And the more than 50-year-old team is highly ranked in what it takes to do so, with nearly a dozen doctorates.

Sophia may look impressive, but engineers from tech giants like Facebook dismiss her as a high-tech puppet with no real artificial intelligence. Whether SingularityNET is the next step in the evolution of artificial intelligence or just another public relations stunt that leads nowhere remains to be seen. As it stands, the company is forging key partnerships to monetize the project.

Big brands like Coca-Cola are already spending a lot of money on AI because they see its potential benefits. If the partnerships with Domino’s and Ping An prove profitable, SingularityNET has a bright future. 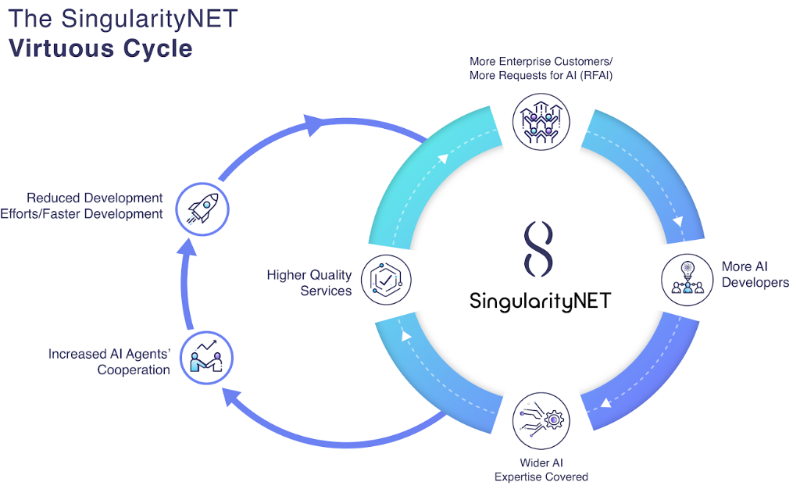 Here the users also check the privacy of the data. It uses smart contracts so as to access validation by also providing great security to it.

They perform or request certain AI tasks. They then make this possible by interacting with various other nodes. These smart contracts have an API that performs an information exchange between the agents. This is also done for agreements, advertising, agreements that are the result of negotiations.

What is the AGI token?

SingularityNET has a total token supply of 1,000,000,000 AGI tokens. The highest price to date was USD 1.61 on June 30, 2021. The SingularityNET ICO token sale took place on December 22, 2017 and raised approximately USD 33 million in ETH . The token inventory was distributed in the genesis block as follows:

AGI is used to transact on the SingularityNET marketplace, paying for goods and services as with digital currencies. Hodlers can vote on network decisions, making it a board commitment. The reward pool is maintained by the network to encourage users to participate in the network, although the exact reward methods are yet to be determined. The distribution of the reward pot is fixed over a period of ten years, and when it is exhausted, the community decides to form a new pot or adapt to new methods.

Staking AGI is required to become an AI agent, which are the entities responsible for the execution of SingularityNET smart contracts. The tokens are used in place of the tokens used by off-chain protocols to allow for cross-chain compatibility without the need for additional native tokens.

Singularity’s project managed to raise $36 million in just one minute during its ICO (Initial Coin Offering). The SingularityNET system uses its own virtual currency, AGIs (Artificial General Intelligence). These tokens will be used to conduct free and secure transactions over the Singularity network.

How can I buy AGIX tokens?

It is possible to buy AGIX tokens from the major and traditional crypto exchanges. However, we advise you not to do this at any exchange. We recommend that you choose Bitvavo or Binance , because these exchanges are much safer than other crypto exchanges. In addition, they always offer high liquidity, allowing you to buy and sell AGIX tokens at the best price.

Of course it is also possible to opt for a decentralized crypto exchange , such as Uniswap , Sushiswap or Pancakeswap . However, there is always a big disadvantage to a DEX. And that is that you have to go through many steps before you actually own your tokens. As a result, the chance that things will go wrong is much greater than with a central crypto exchange. That is why we also recommend that you choose Binance or Bitvavo.

How can I store my AGIX tokens?

Since SingularityNET is a pretty well-known project by now, you can keep the coins pretty much anywhere. You can easily and quickly store your coins in the hot wallet of your crypto exchange. However, this is not always the best and safest choice. It is much more sensible to store your AGIX tokens in a cold wallet, also called a hardware wallet .

The direction and expectations of SingularityNET (AGIX)

For the trader or investor, the SingularityNET seems to be driven by a very ambitious project. A project that could eventually take a real place under the sun in the ultra-competitive world of cryptos.

In terms of price, the AGIX token has been on a steady rise for almost a year now. Although it was much more measured in the first months. In early 2021, the price of AGIX rose to reach the USD 0.52 mark. After this peak in April, the token fell again.

So the token took advantage of the bull run in 2021. At the moment it is worth much less than the value it had when the token came out in 2018. At that time, it was worth more than 1 dollar. The question is whether AGIX will increase to this value in the future.

Today (June 2021) an AGIX token is trading for about $0.1645 on the various crypto exchanges. Do you want to follow the price of AGIX live? Then it is best to use CoinMarketcap:

What is Artificial Intelligence?

Artificial intelligence is also known as machine learning. It means that a machine gets some kind of intelligence because it can learn. Because the software contains special algorithms, it can learn from the mistakes it has made in the past. The software does this by saving its actions and their errors so that it does not perform the same action again.

AI is being used more and more. For example, today there are robots that are getting smarter because they are programmed with artificial intelligence. The advantage of this is that it requires little maintenance to update such machines. They already do this themselves.

Yet there is also a lot of criticism against AI. For example, there are people who are afraid that things may go too far and that machines will eventually become more intelligent than humans. According to them, things could go wrong in that case, whereby machines could take over humanity. For example, Elon Musk is someone who believes in this.

SingularityNET is an ambitious blockchain-focused AI marketplace created by the team at Hanson Robotics, responsible for the humanoid robot Sophia. The project is currently in beta and is already forging partnerships with major companies. The project currently runs on the Ethereum blockchain, but the interoperability can be adapted to other platforms, even its own platform.

AGI is the cryptocurrency token used by the SingularityNET platform. Tokens can be linked for voting rights and become an agent or spent on goods and services on the platform. The SingularityNET Foundation is committed to partnering with businesses and advancing AI research.

If it can continue to tap into technology and marketing buzz, the company could be a success. Even the most promising projects can be missed, and we have a long road ahead of us. But SingularityNET has accomplished a lot in a short time so far.