Have you always wanted to drive a Formula 1 car? Want to be Max Verstappen, or follow in his footsteps? Also always wanted to drive on those historical famous tracks, like Spa or Monaco. All of this has now been made possible by REVV. With their REVV token, they are involved in various digital motorsport games and more or less manage this market. This gives you the opportunity to fully immerse yourself in the Formula 1, MotoGP Ignition, Formula E High Voltage, or REVV racing circuit. Animoca Brands is the developer of this token and they are the same people who are behind The Sandbox.

In this blog, I will give you a detailed explanation of REVV and the REVV token. We are going to take a closer look at Animoca Brands, explain where you can use the REVV token and what the price and the expectation are. If you want to know where to buy the REVV token, you’ve come to the right place.

Please note: keep in mind that the text below about ‘REVV (REVV)’ as well as the explanation to this may in no way be construed as advice. The choice for whether and in what way you want to trade (crypto) and which choices you make in terms of investment is up to you and you alone. We are not financial advisors.

You can first watch this short video explaining the REVV token.

REVV is a blockchain project, set up by Animoca Brands. REVV is actually the REVV token used in four different games from Animoca Brands, at the moment. All four of these games have a connecting factor, and that is motorsport. You can assume that this range of motorsport games will be expanded in the future. The four games currently using the REVV token are F1 DeltaTime, MotoGP Ignition, Formula E High Voltage and REVV Racing. At the time of writing, Formula E is still under development.

The REVV token is the backbone of the Play-to-Earn (P2E) design of the Animoca games. With this token, you can buy and trade in-game products and you can participate in the games with it.

It is also quite a unique and efficient token, as it also allows you to pay the gas fees on the Ethereum network for crypto transactions without using ETH.

Who are Animoca Brands?

Animoca Brands is establishing itself as a leader in the digital entertainment and gaming world. They do this, among other things, by specializing in blockchain, developing AI (artificial intelligence) and gamification. The latter means that you are trying to build game elements into other online activities, such as systems, services or organizations. You can see it as a marketing technique that tries to engage potential customers with products or service.

Their portfolio includes The Sandbox and the SAND token, F1 DeltaTime and Gamee and the GMEE token. They also release collectible NFTs, such as in the F1 DeltaTime game, from FC Bayern Munich, Manchester City (the men’s and women’s team!) and Melbourne FC. But also NinjaStickers, Beast Quest and Crazy Defense Heroes.

They collaborate with, among others, Dapper Labs (known for the CryptoKitties and NBA Top Shots), OpenSea, Harmony and Decentraland.

In which games can you use the REVV token?

You can use the REVV token in four different blockchain games within the motorsport ecosystem of Animoca Brands. I will also give you a short explanation about each game.

F1 DeltaTime is Animoca Brands’ showpiece at the moment. This game is based on Formula 1 and is a real license of the real Formula 1. It is a P2E game and all NFTs that you buy, you actually own, are guaranteed by blockchain technology. You can buy F1 cars, or drivers like Jos Verstappen, teams, but also parts of an F1 circuit. The first Formula 1 car purchased in 2019 sold for ETH 415.9, which was $110,600 at the time. That’s about $1.33 million at the time of writing. In 2019 that was still a sensational amount, today it is a fairly ‘normal’ NFT sale. This also shows how quickly the gaming world can change!

To go into business with Formula 1 turns out to be a smart move. This motorsport reaches millions of people every year and is quite popular. The F1 DeltaTime game cleverly responds to this and makes good use of it.

This video gives a short explanation about F1 DeltaTime.

At MotoGP Ignition, you save cards in the form of NFTs and it is a multiplayer game. You can play this game in three different ways.

This game runs on the Flow blockchain. You can own, buy and sell NFTs and it is also P2E.

The Formula E High Voltage game has not yet been launched, but from August 26 to September 2, 2021, you can bid on 24 different Formula E race car NFTs. You can do this on the new Binance ‘Featured’ NFT marketplace. These 24 cars are classified in the ‘Legendary’ section, the highest section. There will also be Epic, Rare and Common. If you manage to get your hands on one of these Legendary NFTs, you really are an early starter!

The game is released under license from Formula E Operations Limited or Formula E. The real Formula E world is interspersed with gaming experiences. I’m curious about the setup, and how this will work exactly. In any case, collectible NFT cards are being used again, according to Animoca Brands.

This video of the Formula E competition explains exactly what Formula E is and what the attack mode is that will also be part of the game.

The REVV Racing game is an arcade racing game. It was launched on August 20, 2021, but immediately counted on 5554 players who played a total of 53,379 races in a week. This game runs on the Polygon (MATIC) blockchain and you participate in ‘sprint sessions’, consisting of 3 laps that you have to drive. Each entry will cost you 5 REVV, but the first 100 players on the leaderboard can win prizes. This is still an Alpha version of the game and there is still a lot of development and testing going on before the final version is released.

The following image shows the prices, which are converted into REVV, with the current exchange rate of REVV. 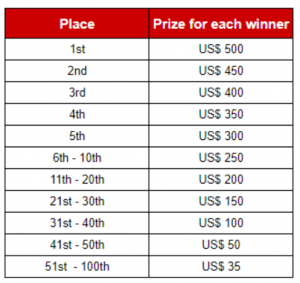 To participate you will need an NFT race car which you can find on the website and purchase on OpenSea. At the moment, the prices for the race cars are still reasonable, starting from ETH 0.01. I wouldn’t be surprised if in a few months, once the game has settled in a bit, these prices start to rise.

Who is on the team behind REVV?

The team behind REVV is varied and also has some impressive advisors within its ranks.

As advisors they have, among other things:

All in all, there are many talented people in the team and experienced consultants involved. An impressive list of names.

What is the REVV Token?

The REVV token is an ERC20 token that is the utility token and also the in-game currency for all motorsport games developed by Animoca Brands. You can also stake this token, as in F1 DeltaTime. This means you can retire your NFT race cars from the game. You cannot enter competitions or sell cars during the strike. However, you will get REVV in exchange for the strike, depending on the rarity, the value of your car and how long you want to go on strike. It is also possible to discontinue the REVV token, in which case you will also receive REVV.

There is also liquidity mining for the REVV token. In January 2021 there was a REVV-SAND pair on Uniswap and you could get NFTs from the Sandbox, specially minted for F1 DeltaTime, if you participated in this liquidity pool.

The image below shows a few such NFTs. 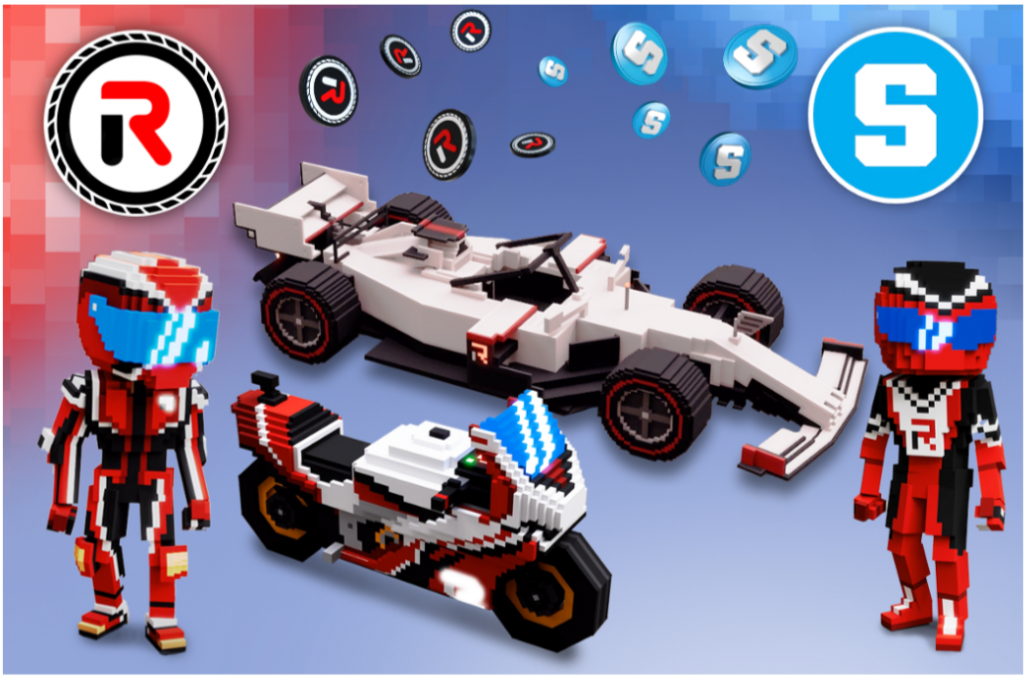 In the following image, you can see the distribution of the REVV token. The REVV for future games is stored in the reserves. You can also see that the team and advisors get 10% of the total. This seems like a good distribution key, which limits the risk that the team will run off with the cash register and still remain involved. 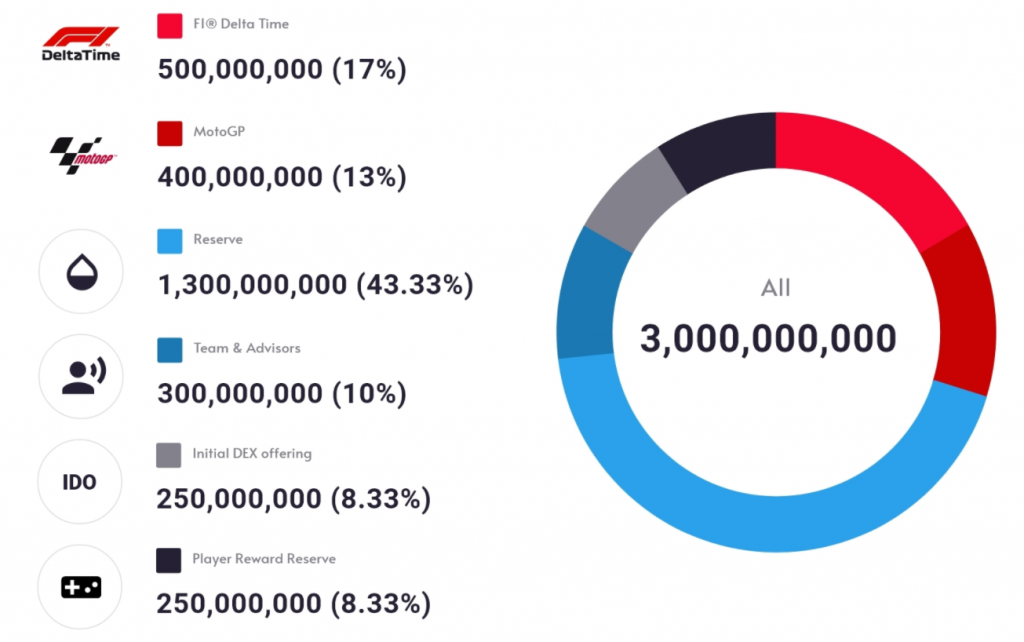 The REVV token is issued over a period of a few years. The last tokens will be issued at the end of 2023. This can be clearly seen in the following image. The REVV tokens in the reserve are not shown in the picture. 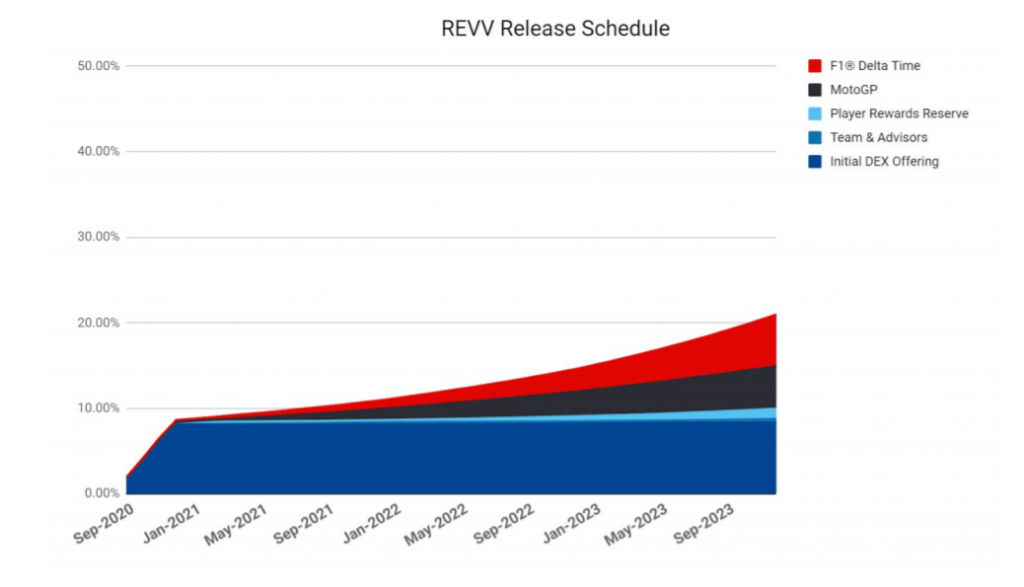 What is the price of the REVV token?

If you want to invest in the REVV token, a good start is to know what the price is. If you are already going to trade, you also want to make a profit. You can make a technical analysis to see what the best buy or sell moment is.

At  CoinMarketCap  , this token is at number 480 at the time of writing. It is a coin that has potential and I would not be surprised if it starts to develop well. Especially if you take the current blockchain game development into consideration. If you want to invest in this coin, it is important to do your own research.

Where can you buy the REVV token?

Unfortunately, the REVV token is not yet for sale on Bitvavo or Binance. In the meantime, however, you can buy this token on CEXs such as Gate.io, Bittrex, LAToken and KuCoin.  There are also many liquidity pools on DEXs where you can find a REVV pair. UniSwap V2 and V3, PancakeSwap and Sushiswap are examples of this.

It is recommended to buy these tokens on a CEX like Gate.io or KuCoin, rather than a DEX like Uniswap. Especially if you are just starting to trade. On a DEX you have to go through several steps to be able to buy a coin. This increases the risk that something will go wrong and you will lose your money.

How can you store the REVV token?

You can also leave the tokens on a CEX like Gate.io. However, this does not protect you against a hack of the stock market. These wallets are also called hot wallets. 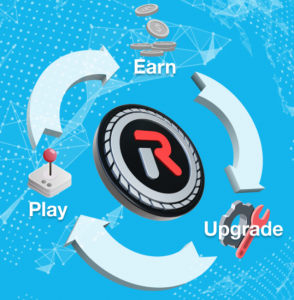 We have already established several times that blockchain is turning the gaming industry upside down. The REVV token contributes to this. The games are still in a start-up phase, but are very promising. Especially with the current state of affairs, how the blockchain-based games are developing, with the P2E concept, one of these games can suddenly get a popularity boost. What I certainly expect is that they will steadily gain in popularity.

The parent company, Animoca Brands, is working on various well-running projects. The REVV token has a strong team behind it with a roster of impressive advisors. It all looks well cared for and hopeful.

Based on the information I have provided about the REVV token, I definitely see a positive development of this token as a possibility. However, do not take this as advice, but do good research on this token yourself if you want to invest in it.

Do you already play one of these games where the REVV token is used, or do you have any questions about REVV? Let us know, we’ll answer your questions in our Cryptokopen Facebook group. See you there!