Ren is one of the many blockchains in the world. Blockchains are no longer separate these days, because new blockchains are added every day. That is also one of the reasons that decentralized finance (DeFi) is becoming increasingly popular. Due to the growing number of blockchains, it is becoming easier to transfer processes to the blockchain. Ren is also a blockchain important to DeFi. We explain what Ren (REN) is and how it works!

Ren (REN) is an open-source blockchain protocol designed to ensure interoperability and liquidity between different blockchain platforms. It was also known as the Republic Protocol in the past. Following this, in May 2020, Ren launched RenVM, which is the core network for its virtual machines. This happened after completing an Initial Coins Offering ( ICO ) of $34 million in 2018.

Ren’s platform is designed to overcome barriers to participation and investment in DeFi projects. According to the founders of Ren, this is a big problem in the world of blockchain and cryptocurrency. So, to achieve their goal, they want to ensure interoperability and liquidity between blockchains.

The protocol’s own token, called REN, is what nodes need to power RenVM. We also call this Darknodes, which we would like to tell you more about later. See a short video about Ren below

The founders of Ren

Taiyang Zhang is the founder and CEO of Ren. It all started way back when a friend asked Zhang to program a trading algorithm for his crypto hedge fund. This hedge fund would later be known as Virgil Capital, co-founded by Zhang.

While working at Virgil Capital, Zhang noticed that there was a lack of support for Over The Counter (OTC) trading of cryptocurrencies. In fact, there was absolutely no way for investors to buy a large amount of crypto without disrupting the markets. Especially cryptocurrencies with a low number of coins in circulation run into this problem. And Zhang wanted to do something about that.

After all, all transactions, including OTC purchases, were publicly available on the exchanges. Automated applications such as Whale Alert draw attention to these large trades, leading to price rises and falls. And that can cause problems in the crypto market.

OTC transactions are almost exclusively for high-money investors who want to buy certain cryptocurrencies without making a fuss. Because blockchains are completely transparent, and so everyone can see what is happening within the blockchain, it is impossible to do this. A large transaction will always be noticed by the network, whether or not by applications such as Whale Alert.

What is a dark pool?

Before we dive into how Ren works, let’s briefly explain what a dark pool is. A dark pool is basically a trading platform where orders are placed and executed in a hidden area. The transactions are thus done over-the-counter (OTC), which means that the general public does not see that a particular transaction has taken place. People can have different reasons for doing this.

Unlike traditional exchanges (such as the stock market), transaction prices are not shown before the final transaction. This allows the anonymity of the users (buyers or sellers). This system is also important to avoid undue impact on the market in large-scale exchanges.

This system has been permitted in Europe since 2007 under the European Directive on Markets in Financial Instruments. In the traditional market, for example, JPMorgan, Goldman Sachs and Deutsche Bank are some brokers who own dark pools.

Using this type of pool is interesting for REN because it allows its users to trade crypto assets at better execution prices than on a public exchange. It also allows to have minimal impact on the market compared to public crypto exchanges. There it could cause a large increase or decrease in the price. And that can have several negative consequences.

How does Ren work?

Now that you know what a dark pool is, you will have a much better understanding of what Ren is and how it works. Dark pools are very important for Ren’s platform.

Ren enables the decentralized and untrusted exchange of cryptocurrency over blockchains using its central platform, the Ren Virtual Machine (RenVM) . The RenVM uses a network of dark nodes that provide the computing power to validate and process the transactions that take place within the network. That goes just like any other blockhain.

This is done using a complex algorithm called the ‘hamir Secret Sharing Scheme’. This will fragment the orders in such a way that the darknodes cannot know or trace the amount or destination of the transfer during the transaction.

The name darknodes also comes from a combination of dark pools and nodes. They are nodes that make it possible to carry out transactions without anyone noticing that these transactions are being carried out. However, these nodes still do the same job as any other node in a blockchain. And that is validating transactions. 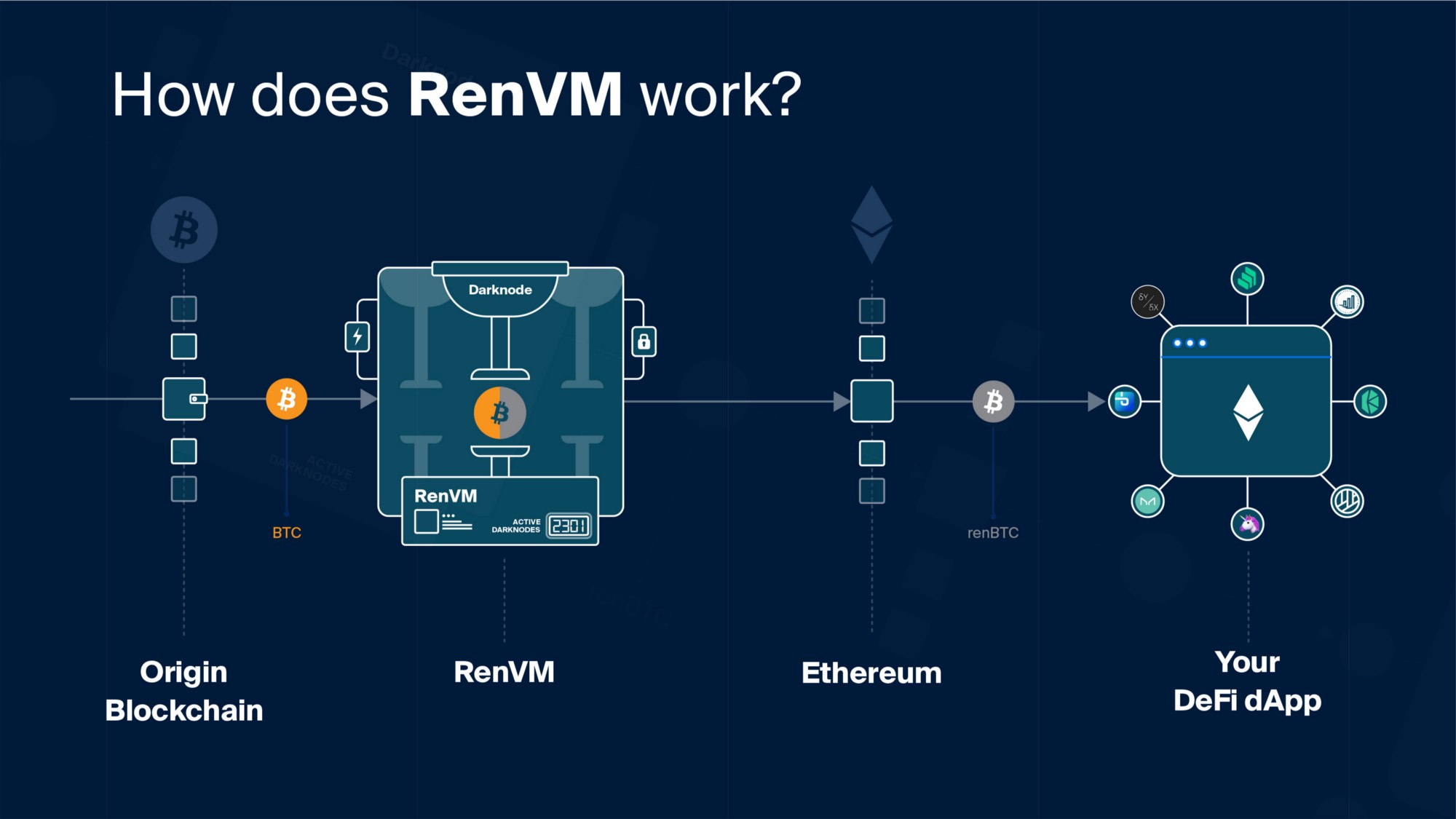 How safe is Ren?

Safety is very important to Ren. After all, it offers users the opportunity to conduct transactions anonymously. Then of course it must also be able to ensure that the transaction remains anonymous, and that it is not picked up by a security breach.

Since October 2020, the main concern (in terms of security) is the control of the Ren team over the user funds. Ren wants to gradually expand the degree of decentralization. According to Ren’s team, the network will initially be even less decentralized, especially in terms of fund storage. This is necessary to guarantee safety.

In August 2020, security analysts expressed concern that all of Ren’s user funds were held in one wallet worth $100 million. Ren’s CTO responded by saying that ‘the nodes are served by the team during those first few days. In theory, we could be doing something malicious. But if we grow and start replacing those nodes with real dark nodes, that will no longer be possible.’ It’s not clear if Ren has acted on the wallet comment since then.

Ren is a complex platform with multiple use cases, but is ultimately designed to overcome the entry and investment barriers for DeFi projects. It is a fairly unique platform, because you do not see the main user scenario with other blockchains.

As a plugin, hetFi allows projects to integrate foreign crypto assets such as Bitcoin (BTC) and Zcash (ZEC) into their offerings. More generally, users can essentially exchange any token between two blockchains without any intermediate steps, such as using “wrapped” versions of tokens, e.g. Wrapped Bitcoin (WBTC) and Wrapped Ethereum (WETH).

RenVM is a network of virtual computers that form a virtual machine. The machines that power the network that makes up RenVM are called Darknodes.

Ren collects various fees for its internal operations, but most of them are not intended for direct profit, but are paid to the miners. As an ERC-20 token, Ren also collects variable fees for gas supply transactions.

In 2018, the Republican Protocol launched two sets of Initial Coin Offers (ICOs) for the Republic Token (REN). The first was a private ICO that took place in late January 2018/early February 2018 and raised a handsome $28 million. The second ICO, this time public, was held a few days later, in early February, and raised a modest $4.8 million.

Investors participating in these ICOs were able to purchase RENs at a price of just over 5 cents dollars per token. Just over 56% of the total supply of 1 billion REN sold. We mentioned it before, but the REN is built on the Ethereum blockchain and is an ERC-20 token.

How many REN tokens are in circulation in total?

Ren has a reserve fund that initially made up 19.9% ​​of the total bid, with a further 9.9% allocated internally to the advisors, team and founders. The team tokens were subject to a two-year lock-up, with a six-month lock-up for advisor allocations.

An additional 10% of REN’s offerings are dedicated to activities such as partnerships and development.

In which wallet should the RENs be kept?

Since the REN is an ERC-20 token, it can be stored on almost any wallet that supports Ethereum. There is no shortage of both hot and cold wallets to store your REN coins. When you have a lot of REN in your possession, it is usually recommended to store it in a cold wallet . This is a hardware wallet , such as a USB, where you can store crypto coins. A hot wallet is a wallet that is online and is, for example, linked to an exchange. In general, a cold wallet is a lot safer, because crypto coins cannot be stolen when there is no internet connection. By storing large amounts of cryptocurrencies on a cold wallet, you ensure that your cryptocurrencies are not stolen.

What is DeFi, and why is Ren involved in it?

The abbreviation DeFi comes from the English word Decentralized Finance. The aim is to re-develop a financial ecosystem, freeing itself from banks and intermediaries such as civil-law notaries and insurers. Decentralized Finance runs on the blockchain and over-the-counter. Services are offered directly, without anyone sitting in between. There are often also dApps linked to DeFi, which make it easier for the user to use the many functions that DeFi and blockchain offer. See below short video what Defi means.

For example, an individual lends money in the form of cryptocurrency directly to another individual. The intervention of a bank, a lawyer or another intermediary then becomes superfluous. The system works via the blockchain and often uses smart contracts .

The use of the blockchain guarantees the security and authenticity of the transactions. The blockchain is a decentralized network. This means that all users have some kind of copy of the history and transactions of the blockchain. It is therefore in principle impossible to change it without the other members of the network noticing.

Ren plays a major role within DeFi, as it contributes to the further decentralization of financial services. Ren’s features make it easier to move large amounts of cryptocurrency across the blockchain. This is a function that was previously not possible in this way on the blockchain. Ren therefore has a unique and specific role within DeFi, and that is why there are plenty of experts who think that Ren can become very big within the world of blockchain and crypto. The only question is how Ren will work when it is widely used. It is still a fairly new protocol, so the future will show how Ren can fulfill his role within the DeFi world.

Where can I buy RENs?

REN has limited support for foreign currencies. Yet it can be found on many well-known crypto exchanges, such as Binance, ByBit, Gate.io and Bittrex.