Have you ever experienced that you were unable to pay a bill, and so you requested a postponement? In that case you will always have to make a higher amount. That can be a problem for companies. That is why Populous offers a platform where people can advance bills to earn money. In this article we explain what Populous is and how it works.

What is Populous (PPT)?

Populous is an exchange project that uses the blockchain to provide small and medium-sized enterprises (SMEs) with an efficient way to pay their bills.

For many SMEs, having enough cash flow to pay all bills is a recurring problem. Companies of this size usually have limited working capital, and therefore sometimes need to request additional time to pay their suppliers’ bills. In most cases, it is more expensive to pay a deferred invoice than to pay it immediately.

The Populous project wants to offer external parties to an SME the possibility to take care of certain invoices in exchange for a more favorable compensation for the SME. When an invoice is sent, these external parties pay the invoice directly to the suppliers and the SME will then have to pay these parties instead of the suppliers.

To understand this, let’s take a look at how Populous enables these parties to get in touch with SMEs and how the system they have set up works.

The partners of Populous

How does Populous work?

On Populous, there is a kind of exchange platform that allows SMEs to sell their invoices to third parties. They can buy the latter through an auction system.

To be able to sell an invoice, the SME must register on the platform. Once this is done, the SME will have to wait for an administrator of the Populous network to approve this request.

Once approved on the network, the company will be able to list its invoices for sale by setting the minimum amount it hopes to earn. This step also needs to be approved by an administrator. See below how it works. 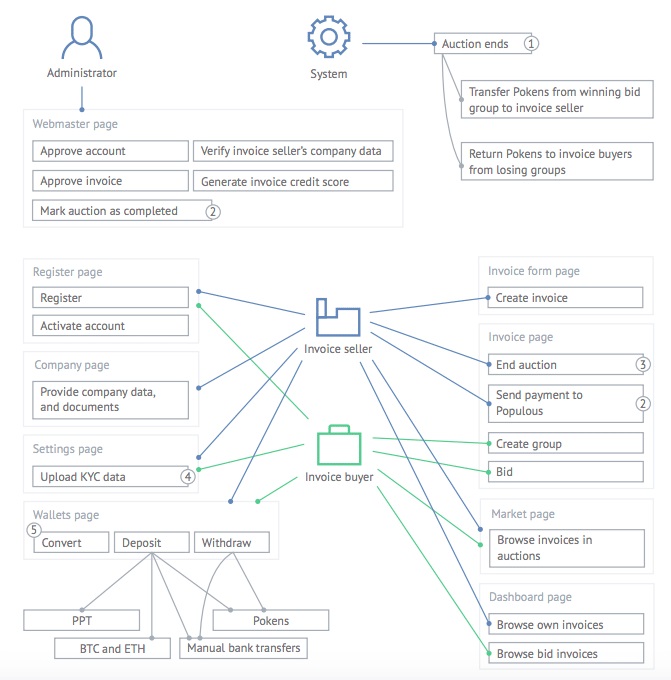 Populous analyzes the risk of borrowing money for an invoice using the Altman Z-score (more on this later), which is based on real-time XBRL data. XBRL stands for eXtensible Business Reporting Language.

This data is public and provides information about the company, such as the estimated value of the SME, the amount of cash available and the amounts owed to creditors within one year.

Once the data from the XBRL has been calculated and subjected to Altman’s Z-score formula, the team managing Populous enters the result into its own scoring system. In this way, Populous does not have to engage an external rating agency and it saves a lot of time and money.

The Altman Z-score formula is a financial model that determines the level of risk in relation to 3 factors:

Populous uses this data to target companies in need of cash flow and filters out candidates who don’t meet the criteria. When an SME adds an invoice to Populous, its approval or rejection will be determined after applying this formula.

Once an invoice has been accepted on the platform, the auction can begin. From the moment the invoice is available on Populous, the auction will last 24 hours.

There are 3 different ways to end an auction:

Once the auction ends, the company that sold its invoices will receive the buyer’s money in the form of Pokens; one of the 3 cryptocurrencies linked to the Populous platform. Sellers can then exchange them for fiat money if they wish.

All buyers who lost the auction will receive a refund of the funds used to attempt to purchase an invoice. Canceled auctions will also result in money being returned to the buyers.

If you’re considering buying invoices, you’ll also need to get approval from a Populous administrator before you get started. You absolutely must go through a KYC (identity check) procedure before you can start placing bids.

Sometimes the invoices presented have a significant value and this is not accessible to all pockets. But Populous has provided a solution to enable as many people as possible to participate in this sale.

As a buyer, you can place bids yourself or join an auction group. Auction groups consist of individual bidders who participate in an auction as a whole to make their bids. The profit will then be distributed in proportion to the amount invested by each investor.

How do I buy Populous (PPT)?

If you want to buy the token of Populous (PPT), you will have to use a crypto exchange like Binance , Bitvavo or Coinmerce . However, preference is of course for Binance or Bitvavo, because these exchanges are safe and have a high liquidity. This allows you to buy and sell PPT for the best price.

You can also buy PPT tokens on many other exchanges, but for security reasons, we recommend that you buy them on Binance or Bitvavo. Do you want to use a decentralized exchange (DEX)? That is possible, but be aware: the chance that a transaction goes wrong is many times greater than on a central exchange. That is why we do not recommend using a DEX.

How do you store your PPT tokens?

Populous’s tokens are ERC-2 tokens, making them incredibly easy to store. If you want to store PPT, PXT and Poken token, you can use a hot wallet that is, for example, linked to the crypto exchange you use. Of course it is also possible to use a MetaMask wallet. However, this is not the safest choice, because in that case your tokens are exposed to hackers.

The safest way to store your tokens is to use a hardware wallet . These are electronic wallets in the form of USB sticks. The 2 best known are the Ledger Nano S and the TREZOR.

There’s no getting around it: the fact that SMEs can sell their invoices to others in order to make purchases easier is a huge advantage for these companies. Although the SME will eventually have to repay its creditors, the fees charged by the creditors will be lower than those charged by the suppliers. This makes Populous an interesting project that has only one competitor among other blockchain startups.

The future of the project will mainly depend on Populous’s ability to enable SMEs to self-finance themselves at a lower cost than other companies offering invoice resale service. Populous’ ability to attract people who are willing to buy back invoices will also determine its success.

In addition, by leveraging the blockchain, Populous is expected to be able to significantly lower the fees charged by intermediaries, allowing them to be more competitive. According to Altman, the formula based on the Z-score will also make it possible to forego the usual rating agencies and bring the notes to market more quickly. However, Populous is a newcomer to the industry and will need to demonstrate its seriousness and ability to complete transactions.