Formerly known as the Matic Network, Polygon is a scalability framework for creating blockchains with Ethereum support. It is still centered around the MATIC token, which is used for governance, staking and gas fees. In this article we explain more about what the Polygon is, how it works and where you can buy the MATIC token yourself.

What is Polygon (MATIC)?

Previously, Polygon was known as the Matic Network. It is a framework for creating interconnections between blockchain networks. It attempts to address some of Ethereum ‘s major limitations – including processing power, poor user experience (delayed transactions), and lack of community governance. Polygon does this by using a new sidechain solution.

Rather than a simple scaling solution like its predecessor Matic Network (which uses a technology known as Plasma to process off-chain transactions before finalizing on the Ethereum main chain), Polygon is designed to be a complete platform. It is also designed to launch blockchains without restrictions.

Polygon allows developers to launch predefined blockchain networks with attributes tailored to their needs. These can be further customized with a growing number of modules, allowing developers to create sovereign blockchains with more specific functionality. See a short video below that quickly explains what Polygon is.

How does Polygon work?

Polygon’s architecture is best defined as a system consisting of four different layers:

The Ethereum tier is essentially a set of smart contracts implemented on Ethereum. These smart contracts manage things like transaction finality, staking, and communication between Ethereum and the various Polygon blockchains. The security layer works side-by-side with Ethereum and offers a “validators as a service” role that gives blockchains an extra layer of security. The Ethereum and Security layers are optional, so they don’t always need to be used. To make the most of all the benefits, it is of course recommended to use all layers. This also ensures the best operation and security.

Beyond that, there are two mandatory layers. The first is the Polygon network layer , which is the ecosystem of blockchain networks built on top of Polygon. Each has its own community and is responsible for managing the local consensus and block production. The second is the execution layer, which is Polygon’s implementation of the Ethereum Virtual Machine (EVM) used to execute smart contracts.

Blockchains launched on Polygon can communicate with each other and with the main chain of Ethereum through Polygon’s messaging capabilities. This will enable a variety of new use cases, such as making decentralized applications (dApps) work better and easy value exchange between different platforms. See below what the Architecture looks like from Polygon. 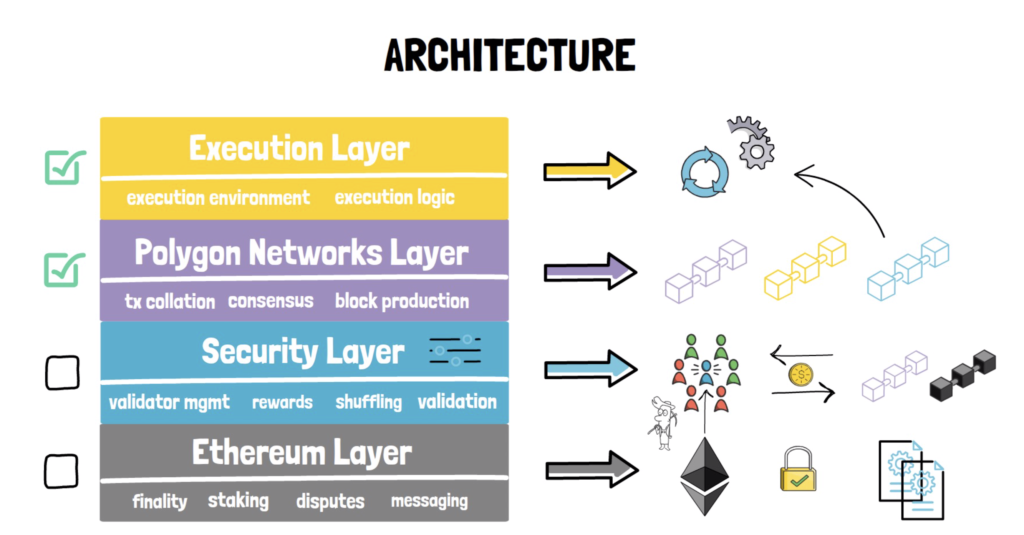 What is a side chain?

We have already discussed a sidechain a few times. But what exactly is a sidechain? A sidechain is a semi-independent blockchain that interacts with an associated ‘main chain’, usually to improve its speed or capabilities.

The goal of Polygon

The long-term goal is to enable an open, borderless world in which users can seamlessly use various decentralized products and services without having to navigate through middlemen first. The aim is to create a hub to which various blockchains can easily connect, while overcoming some of their individual limitations, such as high cost, low scalability and limited security.

Polygon uses a variety of technologies to realize this broader vision, including:

As you may have noticed, Polygon plans to integrate more than one scaling solution, consistent with its goal of minimizing barriers to entry by seeking to keep transaction costs to the bare minimum. By opting for a multiple approach to the scaling problem, Polygon covers itself in case another scaling solution does not achieve its goal. 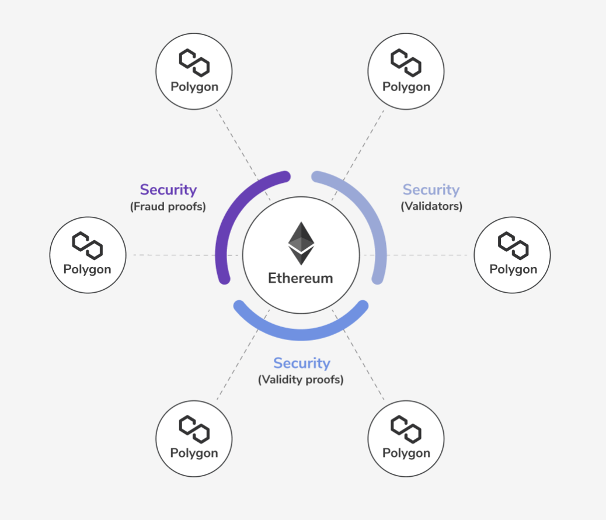 What’s so special about Polygon?

The Polygon project is one of the most recent efforts to bring blockchain interoperability and scale-up, and is designed to address some of the common limitations of interoperability projects such as Polkadot and Cosmos .

On the one hand, it is compatible with the Ethereum virtual machine, making it accessible to people who are used to building applications on Ethereum and programming in Solidity; its competitor Cosmos uses a WASM-based virtual machine. This makes Cosmos a lot less accessible to developers, which increases the chance of success for Polygon.

On the other hand, Polygon’s shared security model is completely optional; sovereign platforms don’t have to sacrifice their independence or flexibility for extra security when they don’t need it. It also claims to be flexible enough to integrate any scalability solution, meaning it addresses even more issues that many blockchains currently suffer from.

There are already several projects using Polygon’s technology. These include EasyFi and Aavegotchi below . The former ( EasyFi ) is a decentralized lending and lending platform that also provides support for sub-guaranteed loans. Aavegotchi is a DeFi trading game based on non-fungible tokens (NFTs).

The Ethereum network has clearly managed to escape the catapult of its miners. In the past, this one wanted to perform a showdown, but where nothing happened. Negotiations then turned to an EIP-3368 that would gradually reduce their income over a three-year period. But this is in addition to the implementation of its version EIP-1559, which remains in effect anyway.

A kind of status quo that is not an obvious solution. And that still prompts some projects that still rely on his network to seriously consider a move, or even partially. And it seems that in this area the Polygon project is considered an option of choice. This is at least apparent from the recent announcements by the founder of the Aave protocol on this subject. This is to enable a reduction of costs in the context of the use of its lending services.

However, it was a difficult statement that sums up the current situation very well. Because it is not only the Ethereum network that is not fulfilling its function. It is precisely the model of the decentralization principle that is being severely undermined by Ethereum, and the team at Aave is in fact not happy about that at all. That’s also the reason they turned themselves to Polygon.

The virtual world project Decentraland (MANA) has also announced that it will start using Polygon. All of this is based on a simple but unequivocal statement that the Ethereum option is “not viable for a decentralized application (dApp) using thousands of microtransactions.” This announcement came just a day after that of the Aave protocol. It’s something that may well go into a domineering effect, with more and more projects turning to Polygon.

Because as much as one cares about Ethereum network, the current situation is nothing less than a real impediment to the development of the crypto world. It is an obstacle that the blockchain world can no longer ignore.

Although Polygon has greatly expanded the vision outlined by Matic Network, it still uses the same token, which is known as MATIC. The MATIC token is used for a variety of purposes in the Polygon ecosystem, including participating in network governance by voting on Polygon Improvement Proposals (PIPs), contributing to security through staking, and paying gas fees. You therefore benefit a lot from owning these tokens. That is a big advantage over many other tokens and crypto coins that have no function, such as Dogecoin for example .

Where and how do I buy MATIC?

The MATIC token is currently in the top 100 cryptocurrencies by market capitalization and has excellent liquidity. It is available for purchase and exchange on a wide variety of cryptocurrency exchanges, including platforms such as Coinbase Pro, Binance , Huobi Global, and Bitvavo , as well as the popular decentralized exchange Uniswap .

Despite the fact that it is for sale on many exchanges, it is not always wise to buy this on any arbitrary exchange. We recommend using Binance or Bitvavo. Why? Because these two crypto exchanges have high liquidity, which allows you to buy and sell MATIC for the best price. In addition, these two exchanges have already proven themselves in terms of security.

Of course it is also possible to buy MATIC on a decentralized crypto exchange , such as Uniswap or Sushiswap . However, this is not always wise. You have to go through many more steps when you use a DEX. This means that the chance of things going wrong is many times greater. So it is safer to opt for a centralized crypto exchange. Since February 2021 you can now also buy MATIC on Bitvavo. Enter below how much MATIC you want to buy on Bitvavo.

Is it smart to invest in MATIC?

Of course you would like to know whether it is wise to invest in MATIC. Unfortunately we cannot answer that. And we are not alone in that. It is important that you base your choice mainly on your own research, and not on what others say. But how do you do that research?

You can use a fundamental analysis . With such an analysis you look for all kinds of information about the blockchain and crypto currency. For example, you look at who is on the team of the project, how the project works and who the competitors are. Based on this research, you can then determine whether it is wise to buy MATIC at the moment. You obviously want to buy MATIC when the token is undervalued (meaning it’s too cheap for what it could/should be worth).

It is also possible to carry out a technical analysis , in which you go deeper into the figures of the project. For example, consider the price. By recognizing certain patterns from the past in the present, you can make an expectation on what the price is likely to do. You also know whether it is smart to invest in MATIC at that moment.

Polygon has started the race to become the first interoperability solution that is fully operational. Polygon’s Proof of Stake blockchain and Plasma scaling solution are up and running, but developers will not be able to launch their own standalone or shared security chains on Polygon until these features are released. Likewise, neither ZK nor optimistic rollups have been launched on the network, as Plasma is currently the only scaling solution available on Polygon. We will therefore have to wait for what the future will bring us.

Polygon’s competitors are also rushing to bring their offerings online. As of March 2021, Polkadot had not yet launched any public parachains; and while Cosmos’ Stargate upgrade has seen the launch of its Inter-Blockchain Communications (IBC) protocol, it won’t become fully operational until IBC transactions are enabled on the network.

So it is clear that Polygon has a beautiful vision in mind. Blockchain is a solution for the current, central systems, but still contains errors. And Polygon wants to end that by providing a solution to Ethereum users and developers. Several projects have already switched to Polygon.

However, we will have to wait before we know for sure whether the solution that Polygon offers actually works. So do good research before you decide to invest in Polygon, so that the chance of profit is many times greater.