The originally Japanese Pokemon had unprecedented popularity in the early years of the 21st century. The unique cards that have been used and traded worldwide are now offered for sale at unseen prices. Given this continued popularity, it seems logical to move from physical collectibles to interactive so-called NFT collections. Unlike regular crypto, NFTs cannot be exchanged directly with each other as they are all unique. So you can say with certainty that you own your interactive anime art, your very own Polkamon.

A Polkamon is an animated digital collectible created on blockchain technology . Each Polkamon is backed by a unique non fungible token (NFT) that can be extracted with PMON tokens, an ERC20 token on the Polkamon platform. Characteristic of Polkamon is that they are part of the NFT hype and are therefore an authentic digital asset. Each digital monster contains metadata that gives each Polkamon unique properties. Like many NFTs, Polkamon can be easily integrated into modern games, art and other blockchain related applications. Below is a quick video review of Polkamon.

Polkamon works on the basis of Booster Packs. This contains 3 different Polkamons and is sold for the price of one PMON token. A Booster Pack can be compared to purchasing a stack of Pokemon cards. You don’t know in advance which unique creatures will be part of your purchase.

Each Polkamon is unique and therefore also has a different rarity, just like the Pokemon cards, which it is very similar to. Currently they have several varieties with Unidonkeys being the most common with a 19% chance. Unidragons are the rarest at less than 1%. By making this subdivision, they want all tokens to remain as scarce as possible and for the Polkamons to become a real collector’s item. 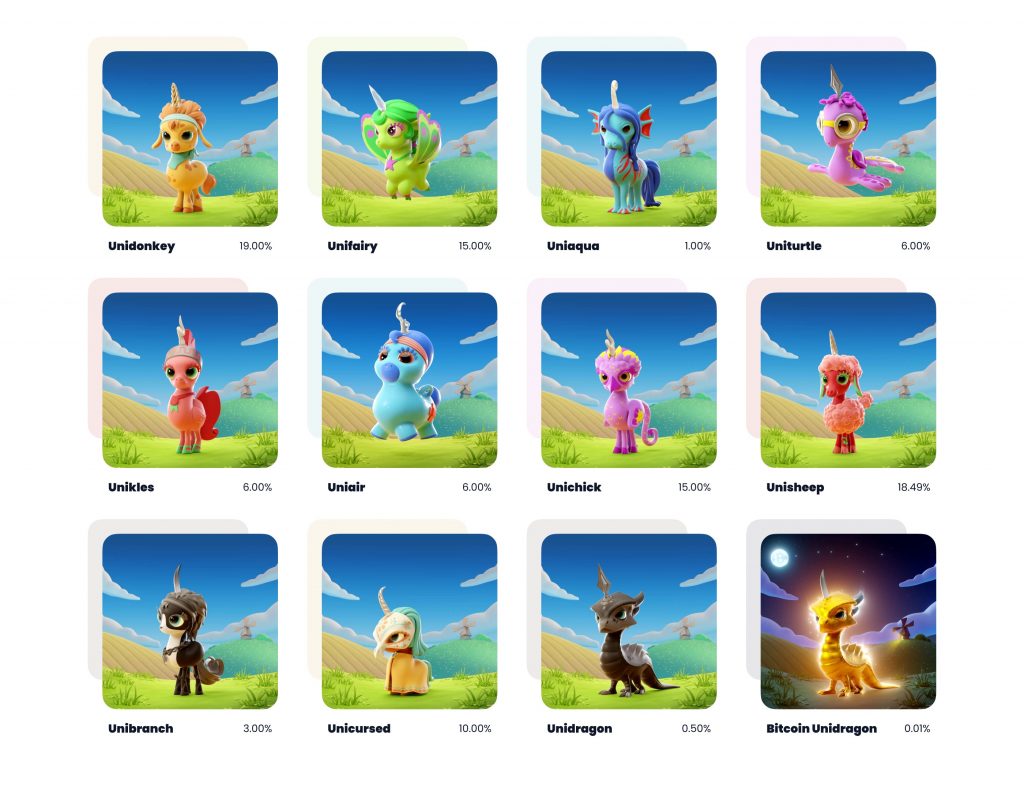 In addition to this family, there are also ultra-rare Polkamons, the special editions. The Bitcoin Unidragon is the absolute winner and you really want it. These are offered on sales platforms for more than $140,000. Not bad, considering that the cost of a booster is currently $20.

To guard against the scarcity of the project, the team has decided not to offer this rare Bitcoin Unidragon in the Booster Pack anymore. They created this Polkamon with the intention of being just extremely rare, but with the demand for booster packs increasing, the scarcity of this unique dragon is in jeopardy.

Buying a Polkamon is done using PMON tokens. You can buy this native token through UniSwap , and then use the native PMON tokens to invest in this Booster Pack. If you’ve unpacked the Polkamon and you don’t like it or you already own it, you can resell it for PMON tokens. Because of this they say that they are a high-liquidity token because you can swap between PMON tokens and the NFT. This is of course accompanied by gas fees, which are used in the protocol to allow staking and rewards.

The Polkamon ecosystem is divided into three distinct layers. The foundation is the NFT-based decentralized ownership system. Your NFT is therefore unique and you have ownership rights over it. This tier is backed by an ERC20 token which improves liquidity and also makes trading this native token accessible and easier.

The second layer builds on the principles of the foundation and enriches these unique tokens through visuals, music, and other detailed metadata. The last step is the application and combination of the base. The proven ownership with associated metadata on this layer confirms the ownership of the tokens, of your Polkamon.

To keep costs low on the Ethereum network when opening a booster package, they have implemented soft minting. Initially, your Polkamons are not struck as ERC721 NFTs. An ERC721 token is a standard for NFTs in the Ethereum ecosystem. This type of token is unique and can have a different value than another token from the same smart contract, due to, among other things, a rarity.

Instead, the information about the ownership of your unpacked Polkamon is recorded on the blockchain in a much simpler and above all cheaper way. Then you can decide for yourself which unwrapped Polkamon is worth hitting as ERC721 NFT.

We see more often that tokens are intentionally burned and thus remove a number of available tokens from circulation. There can be several reasons for doing this, but in general this is to regulate the price and keep the value of the coin stable. Each unveiling and unpacking of a Polkamon also involves the burning of a number of tokens. This is important for the scarcity of the Polkamons which should encourage a constant increase in value. 0.75 PMON per Booster Pack was burned and the remaining 0.25 PMON was allocated to cover soft mining fees. This distribution has recently been adjusted to allow for the strike process.

Interoperability is increasingly becoming the norm in new projects. Communicating between different blockchains is seen as an important evolution. It makes the world of DeFi less complex and complicated, with people having faster access to purchase certain tokens. Currently, complexity is often an obstacle for many. By implementing cross-chain, many projects hope to gain influx from much of the crypto ecosystem.

After the release of the first version, from now on users will also have the option to store special Polkamons on chains other than the Ethereum mainnet. The NFTs are hit immediately when the gas fee of the associated network is low enough. To emphasize their exclusivity, there are a number of Polkamon that will remain available only on the Ethereum network.

Polkamon is currently available on multiple blockchains such as Polkadot and Ethereum. One of the team’s goals is to make Polkamon available for all blockchains in the future.

Polkamon introduced at the end of April that staking would be possible, they do this on the basis of new token metrics. Where previously 25% was used in a token burn to cover the costs of soft minting, this share is now shifted to only 5%. The remaining 20% ​​is now used to provide liquidity to the staking pool.

To promote staking, they have decided to make as many as 200 tokens per day from the Fee Wallet available as rewards in the staking pool for the first 90 days. The APY in the world of DeFi can fluctuate very quickly and therefore it is not entirely without risks. Currently, due to the young project, Polkamon does not yet have an APY calculator. These are often used to get an indication of your returns. They will therefore add an APY indication to their website in the near future. In addition, it also depends on the amount of Boosters you have already opened.

Still, the team wants to encourage everyone to start staking their tokens, and therefore provides a Share Boost:

Any user who leaves a minimum of 100 PMON tokens available to the project by staking it will be able to participate in weekly and monthly special-edition Polkamon NFT airdrops. The first airdrop is scheduled for April 28, 2021. Exactly 24 hours later, the lucky participant will receive his or her Polkamon. 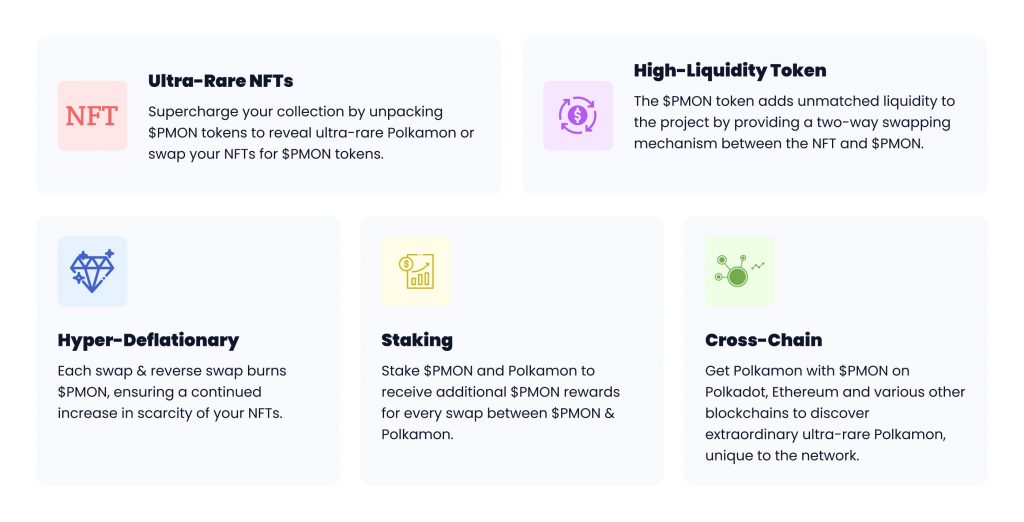 In order to get as much attention and interest as possible, Polkamon decided to organize a promotion in which the so-called early adapters could claim an egg. For a limited time, up to one day before the Initial Dex Offering (IDO) that took place on March 31, 2021, you could register for free and claim a mysterious Polkamon egg. For this you only had to pay a small gas fee. To keep these costs as low as possible, the egg was virtually linked to your Ethereum address and not stored as a real NFT. They do this to make it as cheap and accessible as possible for everyone.

What many did not know, and what was not clear in the communication of the team, is that there was no Polkamon in some of these eggs. It was an empty egg, without value. This was criticized because you had to pay gas fees to claim your egg. By now we all know that gas fees on the Ethereum network can add up. Reportedly, the gas fees when claiming your egg averaged between 10 and 20 dollars. Of course it remains a shame about the costs if you did not receive Polkamon for this.

Where other DeFi projects work with LP tokens, Polkamon uses the Colchian Unidragon. LP tokens stand for Liquidity Pool token. When you make the native token available to provide liquidity, you receive LP tokens that represent the value of your own input. The interactive and animated Colchian Unidragon thus stands as a symbol for your LP tokens.

To trade your NFT, you must of course have it in your wallet. But it is also possible to trade and sell your ‘strike NFT’, the Colchian Unidragon. This means that your current value is still in the staking pool, so the new owner continues to earn extra returns while you transfer the NFT to someone else.

The Colchian Unidragon also changes in appearance and features according to the number of tokens wagered and the length of time they are available to the staking pool. This way your Polkamon strike changes every time and it remains a surprising spectacle.

A token allocation can give you more insight into the future of a project. Depending on how the assignment comes in, you can see what future they want to give the project:

Polkamon is still a very young project and has only been live since April 1, 2021. The goal of Polkamon is to design a unique collectible that can be implemented in various in-game applications and other dApps. The project has not been live very long, and yet they have already achieved a series of objectives, such as:

The team wants to ensure that Polkamon is not seen as useless, but will provide effective value. As an NFT, it’s a real collector’s item, but the team is looking to provide more value for spawning the Polkamon NFTs in the future.

When we discover the market for non-fungible tokens (NFTs), we can’t help but believe that Polkamon is a project that stimulates all the senses. They take the hype of NFTs to a new level through their colorful animated Polkamon figures. To date, we have known NFTs purely as a collector’s item, often sold for exorbitant sums. In addition to being a collector’s item, Polkamon also wants to bet on other possibilities that the world of DeFi has to offer.

It is still a young project and has received a lot of attention last month. Critics note that the project is very similar to traditional Pokemon and wonder if this isn’t a digital copy of the hype we’ve seen from Pokemon cards. That being said, having a Polkamon is a very different experience than having any other digital asset and this sets itself apart in the world of NFTs.