New crypto projects are increasingly coming into the market. It is not a surprise that you don’t know most crypto projects yet. The Phala Network could be one of these projects as it is not very well known yet. However, after reading this article, that should change as we are going to explain everything about this crypto project to you.

We tell you exactly what Phala Network is, how it works and where you could buy PHA tokens. Of course we also tell you how to store these tokens, and what the current price of this cryptocurrency is.

What is Phala Network (PHA)

Phala has strengths in computing power, privacy, and programs controlled by untrusted security principles through the blockchain.

Phala Network aims to revolutionize the way the internet and the cloud work by combining the power of Web 2.0 and the security/privacy of Web 3.0 with the benefits of the Polkadot blockchain. The mainnet will be launched after getting their parachain on Polkadot.

It is thus a smart contracts platform, anonymous and cross-chain in nature, and aims to restore trust in the cloud computing domain with high computing power. The aim is to provide the users with a large amount of computing power while respecting the confidentiality of the data. Below is a video of 8 minutes in which a developer from Phala network explains what Phala Network actually means.

The team behind Phala Network

The team has a good mix of skills between traditional companies and experiences in blockchain. She seems very capable of bringing the project to a successful conclusion. It is a Chinese team, which can be seen as an advantage rather than a disadvantage. The Chinese are very active and well informed about blockchain. 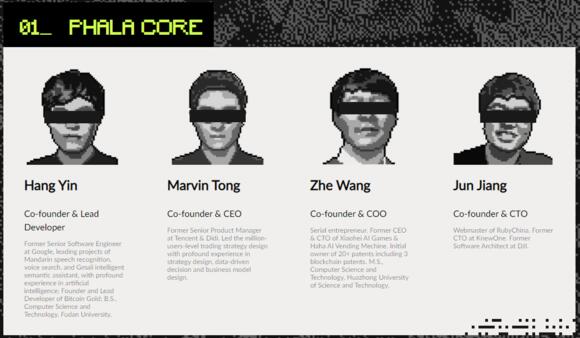 The most important (and best known) is Monero, a cryptocurrency based on the concept of anonymity whose consensus algorithm is Proof of Work . Monero’s technology had to be improved according to the Phala network team.

Another major competitor of Phala Network is Oasis Network . Its effect is very similar to that of Phala. For the rest, IOTA and Dfinity are also major competitors for this project, as they also offer services related to the decentralization and anonymity of smart contracts.

These are other partners close to Pahal Network:

How does Phala Network work?

After you know what Phala Network is and what it does, you naturally also want to understand how this project works. It’s actually much easier to understand than you might initially think.

TEE nodes that process network transactions. This is the equivalent of a Bitcoin miner, and anyone can get started and the necessary hardware is more accessible to amateurs. Do you have a PC with a sufficiently powerful processor? Then you can join the Phala Network network.

They also manage the connection between the users and the TEE nodes, checking and validating the software and hardware used by the employees.

The calculation is performed by the TEE network, which means that the computing power is provided by many computers around the world. However, none of the computers has access to the data, only authorized persons have access to it. 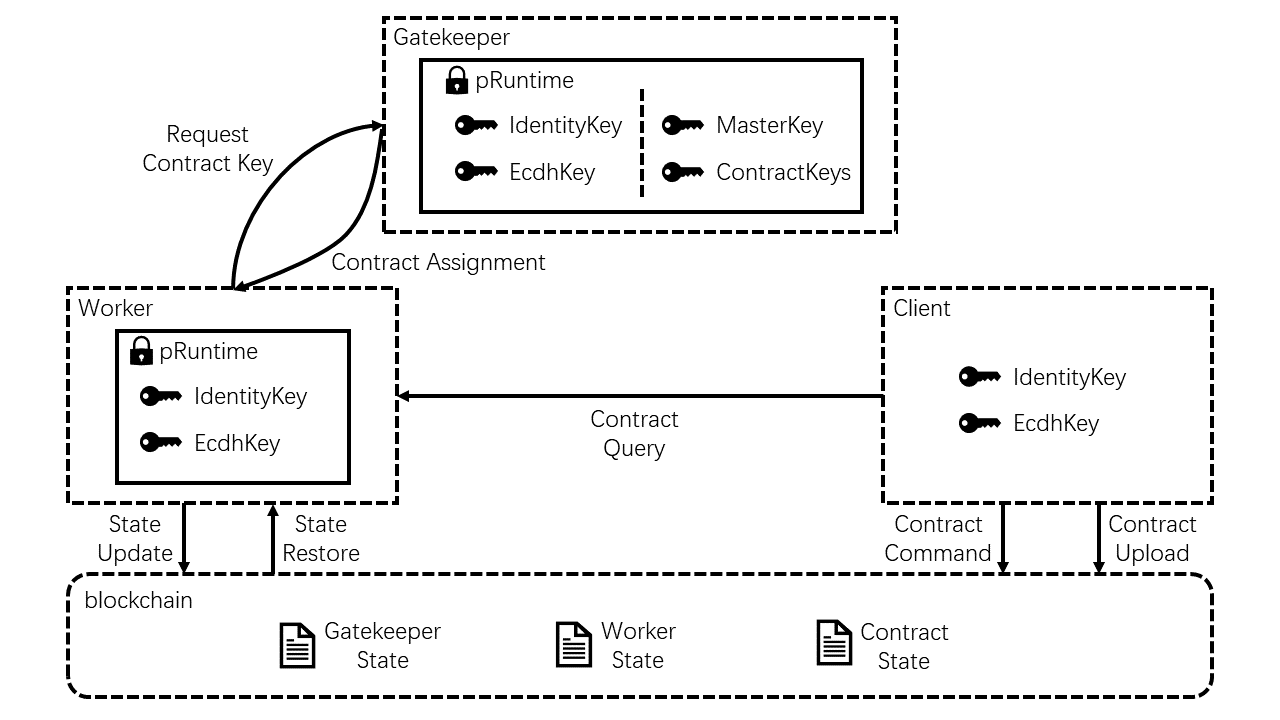 This project can be used by password managers, confidential medical or professional documents, but also private photos and videos. You can trust that your data is safe with Phala Network, and that they do everything to protect your privacy.

This also makes it attractive for companies to use this project. For example, his business strategies, trade secrets, confidential documents, detectives or other sensitive matters can be stored on the blockchain.

Then there could be other uses, for example: GPS data, decentralized exchanges (Dexs) like Acala or Polkaswap, but with orders inaccessible to other traders, confidential notepads, or any kind of confidential calculations for that matter.

The core of the project is massive computing power with the benefits of the blockchain, transparency and decentralization, but with the added bonus of privacy and confidentiality.

This is in contrast to Google Cloud or Amazon, where everything is stored in one place and therefore accessible if it is hacked. It has happened often enough in the past that e-mail has been leaked, or that data that is stored on a cloud is published to the outside world, who should not have access to it.

Phala Network will be able to bring trust to users who need it, attracting a very special audience that can bring a lot of money. And that also benefits the value of the token.

The Phala Network team is currently developing four different projects, two of which are already open source on Phala:

Today, most blockchains are public (Bitcoin, Ethereum and Polkadot for example). Transactions are transparent and set in stone in the blockchain registry and are accessible to everyone.

This can pose confidentiality and security issues for certain actors, companies, institutions or traders when transferring sensitive information that can end up in all hands, sometimes with malicious intent.

Public blockchains inherently limit the use of blockchain and cryptocurrencies to an audience of investors, individuals, and companies who need to use confidential power exchanges.

Let’s give an example. For example, buy and sell orders can be found publicly on the blockchain, even if they have not yet been executed. This leads to price manipulation to chase stop-losses. With Phala Network there will be decentralized and anonymous smart contracts.

This suddenly makes the contracts that external companies make on the blockchain a lot safer. With more privacy, it will also be easier for companies to make the switch to the blockchain, which will ensure wider adoption. There are therefore many people who are very happy with this project. According to it, this could cause blockchain and crypto to become more and more popular.

The latter also benefits the prices of crypto coins. Because the more companies and individuals use crypto, the higher the demand. Higher demand in turn leads to higher prices. Investments thus become more valuable when more people use blockchain and crypto.

The token is an ERC20 on Ethereum until Phala becomes a parachain on Kusama and on Polkadot.

It is a token that works like all tokens on Polkadot in nPoS, ie it is inflationary, about 5% per year to actively reward the network validators.

How can you buy Phala Network (PHA)?

You should always be told to only invest money you don’t need. Of course, this also applies to Phala Network (PHA). When you decide to buy PHA tokens, you can do so through various crypto exchanges. We recommend that you do it through a major exchange like Binance, ByBit or Bitvavo. These exchanges can be trusted, so it will not go wrong.

In addition, you also pay the best price for PHA tokens here, because these exchanges offer high liquidity. That means there is a lot of supply and demand for these tokens on these platforms, allowing for the best price possible.

Of course, you can also use a decentralized exchange (DEX) such as Uniswap or Sushsiswap. However, it is a lot more difficult to buy crypto coins on a DEX. That is why we also recommend using a centralized crypto exchange. Since August 2021 you can now also buy your PHA on Bitvavo. Click below to do that.

Where can I store PHA tokens?

We are lucky that PHA is an ERC-20 token. This allows you to store PHA in almost any wallet; both software and hardware wallets. The ERC-20 token is the token that runs on the Ethereum blockchain, and also the most used token in the world of cryptocurrencies.

If you have a lot of PHA, it is recommended to store it in a hardware wallet. This way you ensure that hackers cannot access this if the wallet is not linked to a device with the internet. You can also store the PHA in a software wallet, as long as you keep it secure.

The course of Phala Network

The value of Phala Network at the time of writing (June 2021) is at a value of $0.9625. However, the price fluctuates continuously, so it is smart to keep a close eye on the price. The best way to do that is on CoinMarketcap’s website.

Are PHA tokens a wise investment?

The value of PHA tokens grows as the number of people using the platform also grows. The more people use Phala Network, the more often these tokens are used. This can be an interesting insight for investors looking to take advantage of a price increase. But is it smart to invest in PHA tokens?

Before investing in cryptocurrencies, it is wise to keep a few things in mind. For example, you first need to know how a project works, what the goal is and who is on the team. By examining this, you are doing a fundamental analysis. However, you can also choose to make a technical analysis. In a technical analysis you look at the price figures of a crypto coin, to find out whether it is a good time to buy or sell PHA. This way you ensure that you minimize the chance of a loss.