What is the Origin Protocol (OGN)? And what is the purpose of this project? You are increasingly reading more about OGN, while many people don’t know much about it. We explain everything about Origin Protocol in this article. You can then decide for yourself whether you want to invest in OGN sees opportunities!

What is the Origin Protocol (OGN)?

The best-known platform in the World for buying and selling goods is Amazon.com or Ebay.com . However, this is a centralized platform. This means that Amazon/Ebay acts as an intermediary. So if you want to sell something, Amazon/Ebay is the one that takes care of this. Your advertisements are also stored on the Amazon/Ebay server, and if you want to advertise within certain categories, you will have to pay money to Amazon/Ebay.

This is the problem Origin Protocol wants to solve

Origin Protocol aims to enable the market to engage in true peer-to-peer trading. This means that you are trading directly with the seller, and there is no platform as an intermediary.

For example, when you book a hotel through Booking.com, you will have to pay an extra 15-30% fee to Booking.com. They act as intermediaries, and they want to earn money from that. That in itself is not a bad thing, but booking a hotel room will become much more expensive as a result, and the hotel will have less money left over.

Everything will become easier and cheaper if you can negotiate directly with the hotel without going through a third party. Authorizing transactions and buying/selling goods and services is easier and faster when done on a decentralized platform.

In addition, the project aims to help the community take ownership of the network data rather than having it owned by third parties. This will put an end to non-transparent third-party behavior, such as preventing negative news from service providers.

The Marketplace platform now has more than: 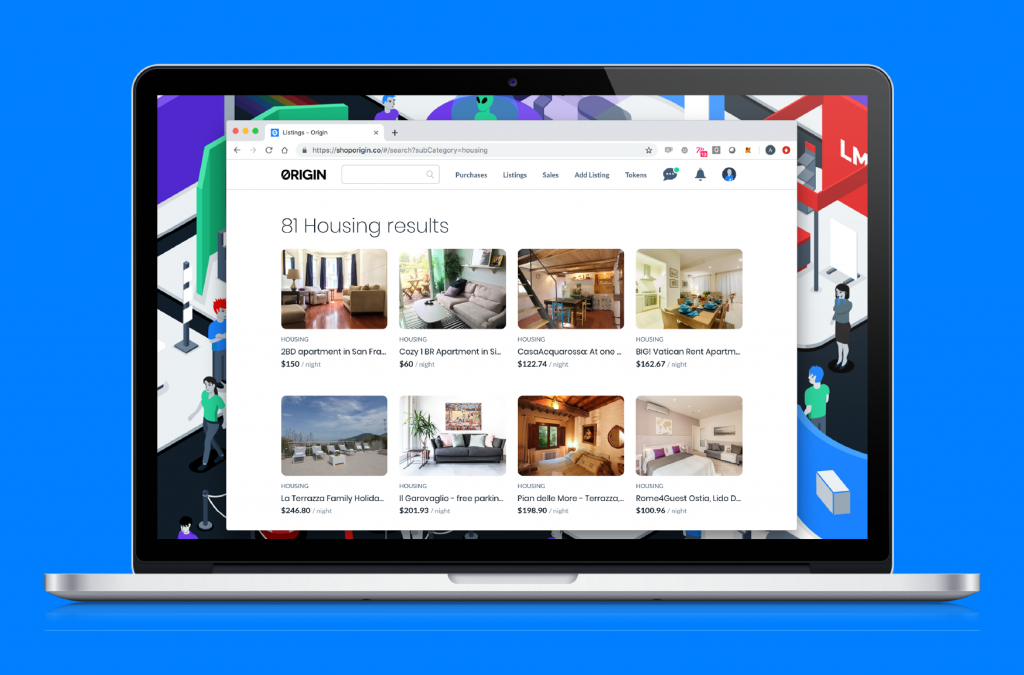 The project is led by experienced people from PayPal, YouTube and Google, among others. In addition, the project is also backed by leading investors such as Pantera Capital, Foundation Capital and Steve Chen, which we will tell you more about later. 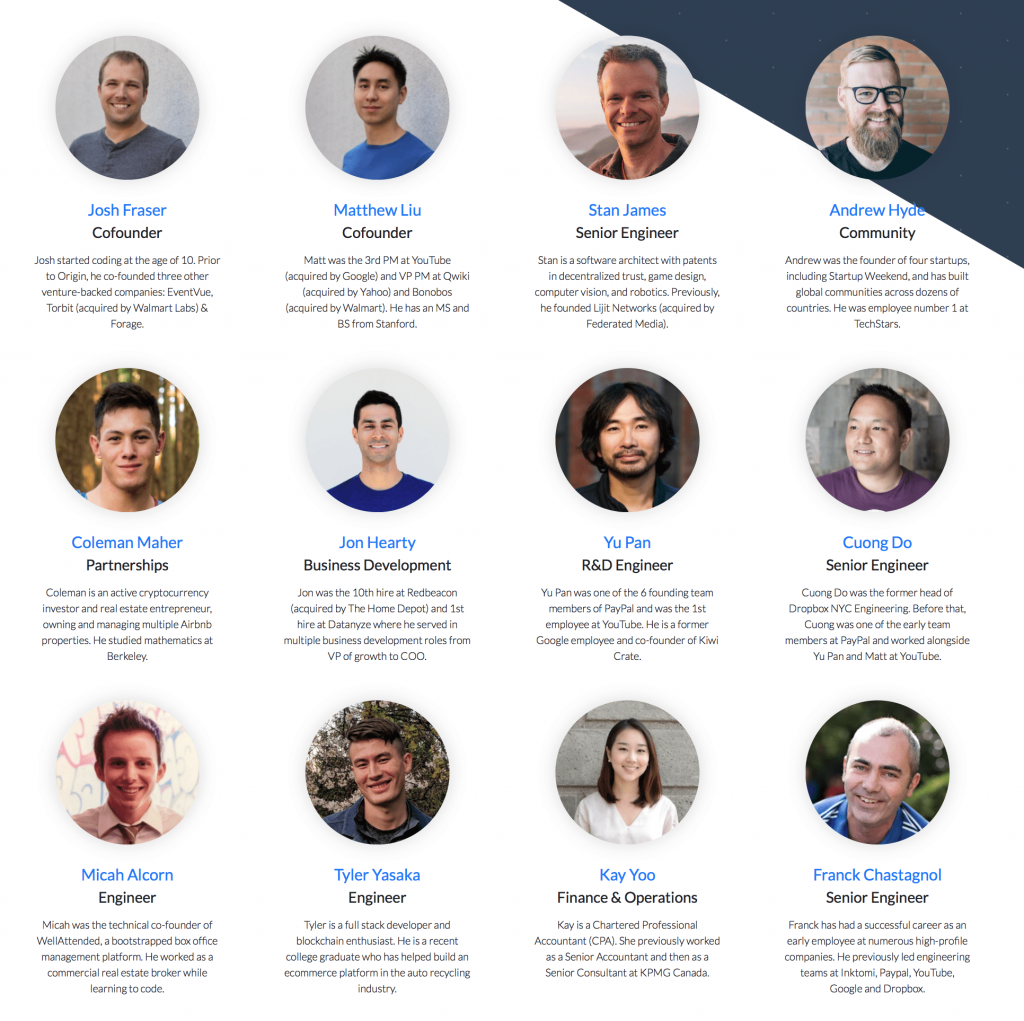 The Origin Protocol team consists of the following people:

You’ve probably noticed how diverse the Origin Protocol team is. The team all have strong backgrounds, having held senior positions at prominent companies. And that is a very important fact for when you want to invest in a crypto currency. The team of a crypto and blockchain project is very decisive for the chance of success.

In addition to the partners you see above, Origin Protocol has even more partners such as:

Origin Protocol therefore has many, many partners. And those partners only make Origin’s platform stronger. It says something about how many other companies need the Origin Protocol. Many investors also base the value of OGN on this.

When Origin Protocol can no longer offer its services, these companies would all be in trouble. So OGN currently has a very strong position in the market, and the chances of losing this position are very slim.

What is the OGN token?

OGN is the proprietary token of the Origin Protocol. The OGN token will be issued as an ERC-20 token. That is the most commonly used token, which is required to function on the Ethereum blockchain . You can see that most of the tokens are based on the ERC-20 token. And that is positive, because that means that you can store the token in almost all wallets.

Origin Protocol users are rewarded with OGN when they make purchases, verify their identity, promote Origin on social networks, and refer new users. In this way, Origin Protocol tries to get their users to promote the platform. This saves a lot of costs that would otherwise have to be spent on a marketing team (which, by the way, still happens). 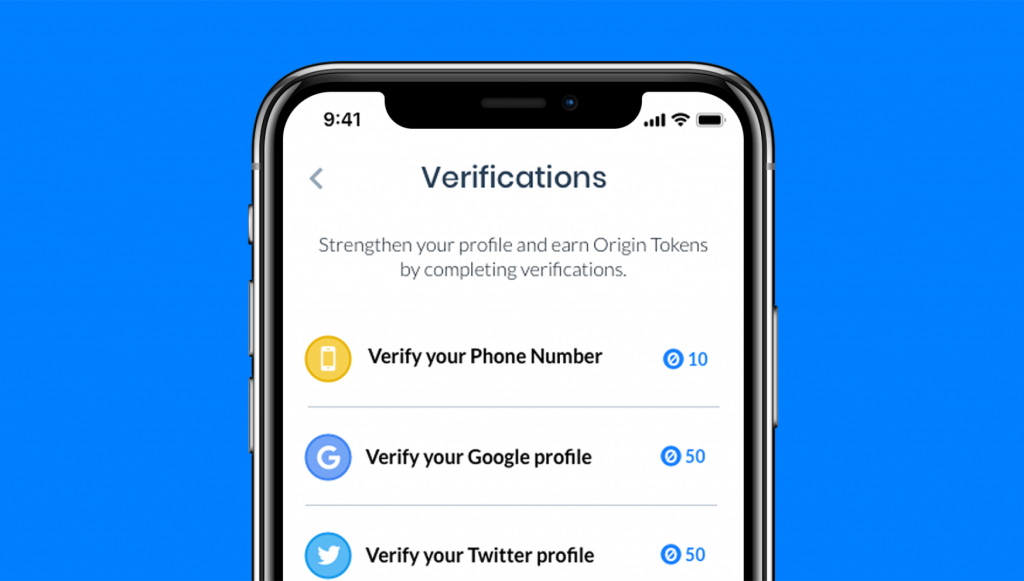 Merchants pay commissions with OGN tokens to app developers to promote their products. The developers can make it more visible on Origin Protocol e-commerce and marketplace applications. 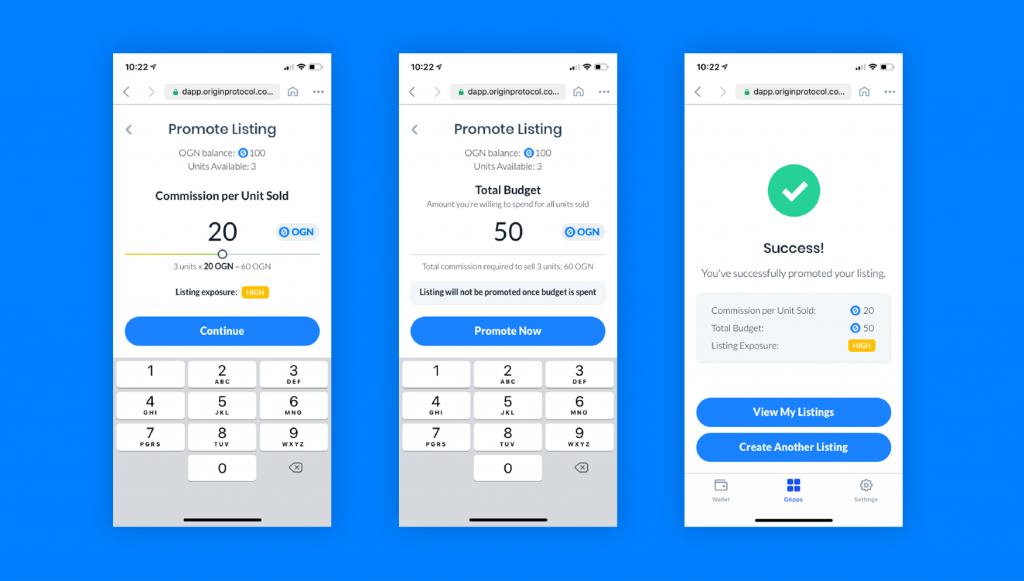 Buyers can use OGN to pay sellers when they buy goods or use services. OGN is therefore also the payment method used on the platform. It allows OGN to increase in value as it has a user function. This ensures that the token has more value than if it has no practical function. 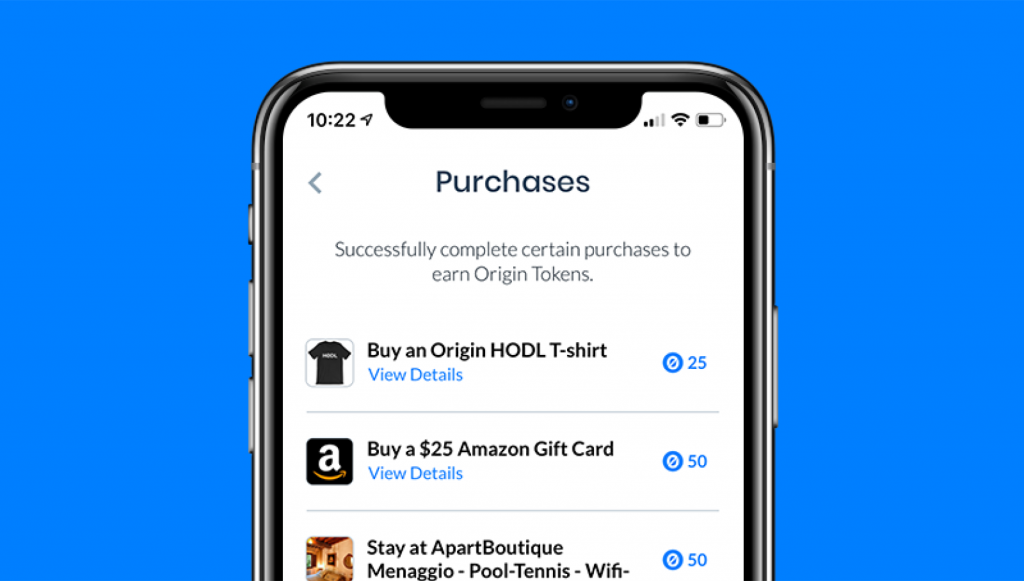 The Origin Protocol team is currently busy investigating whether new models could be developed. And of course they don’t do that without reason. The aim is to create additional benefits for OGN token holders providing energy and support to different parts of the network.

OGN tokens will also have administrative functions in the future. Unfortunately, not much is clear about this at the moment. So we will have to wait and see before we know what other functions the OGN tokens have. However, we don’t expect that to take very long, as the Origin Protocol team is busy realizing plans for the future.

How to use the fund

Currently, the project has used approximately 21.70% of the fund. Expenditures have been made according to the following classification:

The project uses a Gnosis multi-signature wallet to store the fund’s money in the form of cryptocurrencies. The Fiat reserves are held in bank accounts in USD.

How can you earn OGN for free?

Since the project is still in the early stages of its development roadmap, there isn’t much choice for the token holder to find ways to profit from the OGN besides becoming a merchant or OGN token holder.

However, with a clear development script, the project is getting the attention of the world’s largest exchange – Binance . We therefore believe that it will not be long before the project and revolutionary development will continue.

The platform allows buyers and sellers to connect with each other through various apps and trade directly without intermediaries. Sellers post offers and pay commissions with OGN for the original dApp or any dApp from other parties.

All data is stored and shared on the Ethereum blockchain with the IPFS network. This allows many different dApps to display the list of merchants and ads.

Apps and affiliates (e.g. influencers, bloggers, future publishers) can earn OGN by collecting commissions from sellers. The platform also uses a variety of middleware and infrastructure services, including Origin Node, the metatransaction converter, and the arbitration service.

End users will receive OGNs when promoting and advancing transactions on the Origin network.

The Origin platform isn’t the only product from Origin Protocol. They have various products available that consumers and companies can use. Here are some of the key products delivered by the project:

How do I buy OGN?

The fastest way to buy OGN is to buy it directly through a crypto exchange like Binance. In addition, you can be part of the Origin Protocol ecosystem (product developers, buyers, operators, introduce new users) and then be rewarded with OGN. That way you earn OGN without having to pay for it.

In addition, you can participate in Airdrops, AMA and staking events for the chance to receive rewards and get paid with OGN tokens.