We see more often that an exchange uses its own native token. OKB, the Centralized Exchange Token, is the native token of the exchange OKEx. This is one of the largest crypto exchange platforms in the world in terms of volume. The utility token OKB, was initially an ERC20 token built on the Ethereum blockchain. With the go-live of the mainnet, it now operates on their own blockchain, offering numerous benefits on the OKEx exchange.

OK Group is an investment company that reserves more than $100 million to invest in new projects in the form of start-ups. They focus on top digital assets and in particular in the development of blockchain projects with great potential. In addition to OKExchange, they also have OKCoin, a similar global trading platform with offices from San Francisco to Malta to Korea.

Since the start of OKExchange in 2014, OKEx has quickly become one of the largest exchanges outside America with millions of traders on a daily basis. The exchange was made possible by the OK Block Foundation. This is an organization that strives for extraordinary blockchain projects to achieve mass adoption. The team behind the foundation claims to be experts in technology, investment and marketing. With this knowledge and expertise, they want to change the future using blockchain technology.

They see themselves as a leading exchange for both spot trading and variants. Think of margin trading, future trading and perpetual. In doing so, they emphasize the fact that investors can easily maximize their profits while mitigating risks. However, the risks are the same at every exchange and it is important to only trade with sufficient knowledge and good risk management.

In addition to OKExchange, OK Group also has OKCoin, a second trading platform. The question can be asked why: why use two different exchanges?

Researching OKExchange is quite difficult at first sight. Why? You end up at two different exchanges, without knowing what the difference is between OKEx and OKCoin.

Since 2017, OKExchange has been operating as a separate entity from OkCoin with its headquarters in Malta. Initially, both exchanges were part of the OKGroup, but now they both operate separately and OKExchange is therefore also led by individual stakeholders.

OKCoin is a fiat crypto exchange that is seen as the bridge to crypto. By this we mean that it is an easy way to exchange your fiat money for a certain crypto. Before you can start trading on OKEx you will need to own crypto, you cannot trade directly with your fiat money there. This is also known as a fiat-on ramp platform. When we compare both exchanges, we also see that the options are much more limited at OKCoin. It only offers about 20 cryptocurrencies here.

OKB is the native token of the OKExchange and is therefore a utility token . It was created by the OK Blockchain Foundation and was adopted by OKEx as their global utility token to get numerous benefits. This includes cheaper transaction costs, governance functions and price promotions such as giveaways.

You can make a comparison with the Binance exchange and the associated BNB coin, which also gives you many advantages. We’ll come back to a series of similar projects later.

Since the mainnet went live in January 2021, OKB has been adopting the Ethereum blockchain to its own blockchain. This means that it is no longer an ERC20 token, but runs on its own blockchain. The OKB tokens are already tradable on other exchanges, but the plan is to also trade these tokens globally on all exchanges in the near future. You can currently trade OKB at, among others:

In addition, there are numerous benefits for OKB holders when they trade on the platform. They refer to the trading costs themselves, but also to the Jumpstart, C2C loan, voting rights and much more.

As a trader you are always looking for the cheapest fees. This is obviously a good way to maximize your winnings and get as many tokens as possible for the best amount. We often see that by using a native token, you get discounts on the exchange. This is done to ensure that traders start trading on this exchange. The more native tokens you own, the cheaper you can trade.

Trading costs depend on several factors. Think about

OKExchange makes a distinction between a ‘normal’ user and a VIP user. Both have their own level with certain advantages. As you can see in the image below, there are many differences. However, these do not relate to the trading volume or withdrawal volume, but in particular the maker fee and taker fee.

Maker fee : these are the costs that an exchange charges you when you add an order to the order book. So these can be limit orders, but also stop-loss orders

Taker fee : These are the costs that an exchange charges you when you remove an order from the order book. These can be, for example, market orders.

The distinction at OKExchange is therefore mainly made on the basis of the amount of OKB tokens you have in your possession. If you have less than 500 tokens, you pay a maker fee of 0.08 and a taker fee of 0.1%. These are competitive rates, but the more OKB tokens you own, the cheaper it becomes.

At the time of writing, August 2021, this OKB token is worth just under $22. Before you are entitled to level 2 benefits, you as an investor should already have $11,000 worth of OKB tokens. 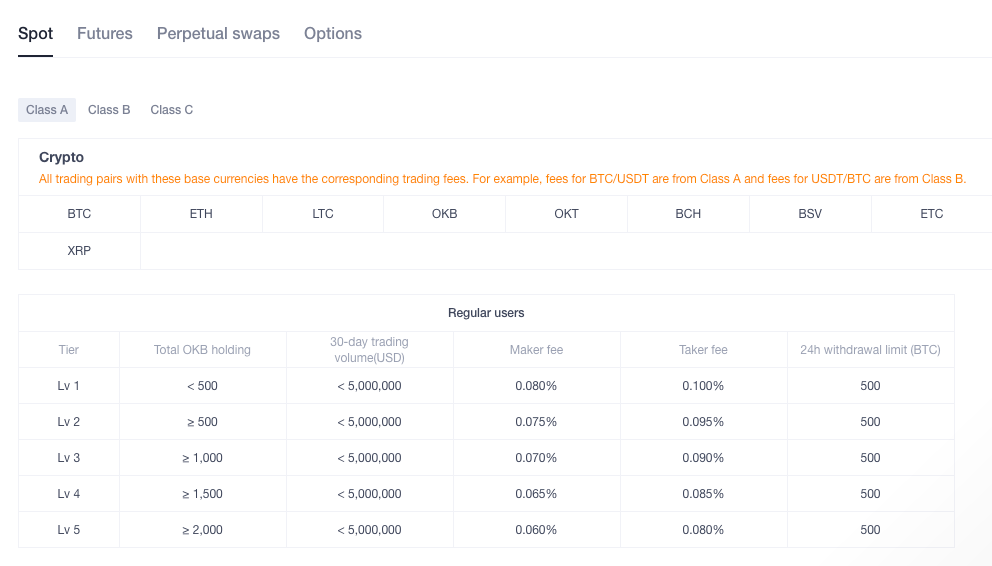 At the top of the menu you can consult the different options. These all differ per market, per class and per digital asset. It can therefore be quite confusing to keep track of which costs you now incur as an investor and where you benefit.

OKEx also has its own program called OKEx Earn, which focuses on generating passive income through the OKB token. This is done on the basis of different strike pools. You can flexibly stake your OKB tokens here at an interest rate of 0.44%, but all the more interesting are the other staking pools with attractive APYs.

Each token has different options where you can immediately start staking your tokens. In addition to flexible and fixed stakes, with some tokens you can also choose to compound or just stake your savings. Of course, this all depends on the digital assets you own. In the example below we see the different possibilities for Kusama .

OKExchange has its own token sale platform that they use as a jumpstart. With this they launch new projects where you can use your OKB tokens to invest as an early investor. By adding your tokens to a pool, you will receive rewards in the form of tokens of the new protocol. At Binance we know the same principle as the Binance Launchpool, where you then have the option to add liquidity through different pools. This jumpstart only works with OKB tokens. Without these tokens, you cannot participate in a jumpstart.

Buy Back and Burn

The OKB Buy-Back &amp; † Burn program was originally launched on May 4, 2019. It uses 30% of the trading costs of the sports market to buy back the circulating OKB tokens. They are then sent to a ‘burning address’. This destroys them and limits the circulating stock. So far, there have been 7 Buy-Back & Burns and a total of 20.671 million OKB tokens have been burned.

The team considers the OKB token to be a deflationary currency. The aim is not merely to influence the price through the token burn, but to improve the development of the OKB blockchain.

Any currency that continuously depreciates its supply is called a deflationary currency which can support a number of goals such as avoiding the circulation of unsold coins in the market, maximizing profits or increasing the currency’s appreciation. At the time of launch, there was a total supply of 1 billion coins. After 300 million were put into circulation, the remaining 700 million OKB tokens were burned.

About $100 million worth of OKB is traded daily. Major trading pairs are USDT, BTC , and ETH . While the vast majority of OKB is traded on OKEx, it is also available on over 40 other major peer-to-peer, spot and decentralized exchanges, including BitMax.

The ecosystem has developed more than 80 different applications worldwide with a wide range of services. These range from payments, loans, entertainment, social networking and even tourism. It shows the power of their knowledge and expertise. In addition, it is now possible to trade with no fewer than 9 different fiat variants such as the Euro, the South Korean Won and the Indonesian Rupee.

The biggest shift in the world of crypto in 2021 will be the advent of Decentralized Finance ( DeFi ) and the development of NFTs. As an exchange, you cannot stay behind and OKEx invests in a DeFi Hub. They see this as a portal to the world of DeFi where you can invest in NFTs, swap and participate in DeFi yield farming and more. Here we can make the comparison where the central trading on Uniswap takes place via the native token of UNI. At PancakeSwap this is via CAKE.

In the past, there have been plans to launch its own decentralized exchange (DEX) on the mainnet. However, it is not clear whether this planning will become reality in the near future. 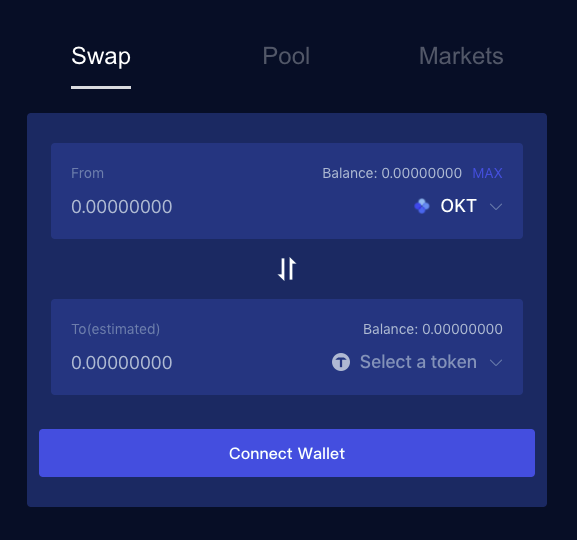 In the past, OKEx has come under fire for allegedly lying about trading volume. In the battle to become the largest exchange worldwide, they are said to have manipulated numbers to show that the largest trading volume would take place on OKEx. In March 2019, OKEx acknowledged that they were guilty of wash trading, but pointed out that this behavior was driven by the market.

Wash trading is a way of making fake trades to increase liquidity. This increased liquidity convinces investors that the exchange is very active and exploiting a high trading volume. This instills confidence in order to attract investors.

OKEx was founded in 2017 by Jay Hao as part of the OK Group. As a self-proclaimed ‘blockchain evangelist’, he believes blindly in blockchain technology and sees a future in which this technology removes all transaction barriers with unprecedented efficiency at the center. As CEO, he wants to be the bridge between OKEx and the users from all over the world to shape a new future together with them. That is why he thinks the use of a utility token is important to realize this revolution together. The co-founder who helped realize OKEx is Star Xu, CEO of OK Group.

OKEx is currently the 12th largest trading platform according to CoinGecko. As a major trading platform, they are constantly innovating and moving. In addition to all the trading options out there, they also invest in a decentralized exchange where NFT projects will be launched in order to anticipate the latest market trends. The platform has large volumes which is positive for investors. It is similar to other exchanges that want to become an all-in-one exchange where all facets of the crypto ecosystem are discussed.

Currently, several protocols already support OKEx, including UniSwap, Aave , and SushiSwap . In the expansion of this, the OKB token will also become increasingly important and will be used more and more prominently to reward OKB holders. The developments of OKEx will therefore be important for the price of the OKB token.