On Polkadot you have to look hard for a project that will democratize crosschain smart contracts. There are only 5 projects in total that deal with this. And they are not that easy to understand at all. So it’s not surprising that you don’t hear much about these kinds of projects.

That will change today. We are going to explain what Moonbeam is, how it works and what you can use the tokens for. We will also give you a short explanation about Moonriver. This project is also managed by the Moonbeam team, and they go hand in hand.

What is Moonbeam (GLMR)?

Moonbeam is a parachain on the Polkadot network and most notably has its own economy with its own token, the Glimmer (GLMR). This implementation allows for Moonbeam’s integration and connectivity with other para-chains connected with the Polkadot protocol, and even with other blockchains such as Ethereum and Bitcoin , via bridges.

Applications on Ethereum often face problems related to transaction costs and the use of smart contracts. Moonbeam allows administrators of these applications to move part of their structure from Ethereum’s layer 1 with minimal changes needed.

This also allows for a hybrid strategy, where applications run on Ethereum and Moonbeam simultaneously. The importance for developers is quite high, since such an implementation allows them to extend their reach to the Polkadot network and other chains connected to the protocol.

So far, several protocols and applications have been integrated into or built around Moonbeam. These include The Graph , Covalent, Balancer , SushiSwap , MetaMask, Chainlink , Band Protocol , and Polkastarter .

The team behind Moonbeam

Derek Yoo is an entrepreneur in the field of service technology and software design. He has 20 years of experience in this field and has grown his previous company Fuze, where he held the position of CTO and co-founder, until it had 700 employees. He left Fuze in 2019 to found Purestake.

Moonbeam and Purestake are located in Boston, north of New York and close to Canada. They are American companies.

The Moonbeam project started on April 27, 2020, meaning Moonbeam was already in operation before the official launch of the Polkadot network.

Moonbeam’s biggest competitors are Edgeware, Plasm Network, Clover and Trustbase. They are names that probably don’t sound very familiar to you, as these are fairly new projects. In addition, these are not exciting projects, so you hear less about them.

It is important to know that there are several competitors that will make Moonbeam difficult. Still, at the same time, there are plenty of indications that Moonbeam could really make it, and thus they are too far ahead of the competition.

This is mainly due to the structure of the project, the well-thought-out operation of the tokens and the connections with the Polkadot team. Moonbeam has already been featured 3 times on the official Polkadot YouTube channel. Just for comparison: its biggest competitor Edgeware has been on this channel 0 times. Plasm has been on the channel 1 time.

So it’s clear that Moonbeam has good ties to the Polkadot team, and that can only help this project in its favor.

How does Moonbeam work?

The Moonbeam project will enable developers of projects on Ethereum to hook into Polkadot and allow smart contracts to communicate between 2 different blockchains.

This is something new in the crypto world: Ethereum projects will be able to take advantage of the flexibility and benefits of the Polkadot network. It has never before been made possible to make smart contracts between different blockchains work with each other. Many therefore speak of a revolution within the crypto world. Below is what the Polkadot ecosystem looks like. 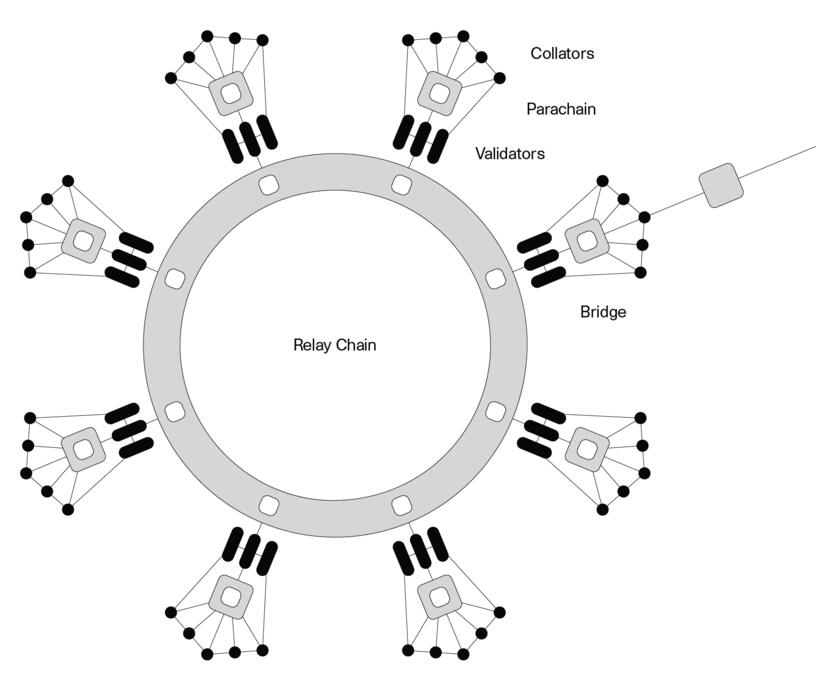 The use of smart contracts today is mostly done on the Ethereum blockchain, with the user executing the contract also paying various transaction fees.

The fees are then paid in GWEI on Ethereum. When using Moonbeam, this will be done the same way. This means that the transaction costs will be paid in Glimmer.

What is Moon River?

Moonriver is designed as an additional network to Moonbeam and will be deployed on Kusama . Kusama is the testing ground for updates to Polkadot’s parachannels. Thus, before new features are introduced on the main Moonbeam network, they will first be integrated into Moonriver.

The new code will be sent to Moonriver, where it can be tested and verified under real economic conditions. Once the update has proven its worth, the same code will be implemented in Moonbeam on Polkadot.

This parallel chain will have its own token, the RIVER. The delivery and other economic behaviors of the tokens on Moonriver will therefore be the same as on Moonbeam, although the distribution of the tokens will be different to support unique features of this test network.

What are the GLMR and RIVER tokens used for?

We will therefore focus on the many features of the GLMR, as it is the main asset of the Moonbeam ecosystem, knowing that the RIVER shares the same characteristics.

The first use case for the GLMR token is the payment of transaction fees to access and support Moonbeam network operations. A portion of the GLMR will also be paid to the operators of the entire node responsible for the maintenance of the parachains at Polkadot and Kusama.

One of the other commands of the Glimmer token has to do with the governance of Moonbeam. In order to facilitate the governance mechanism on the channel, GLMR token holders will be able to propose to hold referendums, elect board members, vote for proposals to change the protocol parameters, etc.

A fairly healthy feature for the long-term evolution of the price of the GLMR token is that 80% of the fees related to the transactions and execution of smart contracts will be automatically burned. This mechanism acts as a deflationary force depending on the use of the network. The remaining 20% ​​will go to blockchain cash, which can be allocated through blockchain governance to projects and initiatives that drive adoption and engagement with Moonbeam.

How can I buy GLMR tokens?

At the moment, Moonbeam is still an ICO . This means that they sell their tokens to raise money to get the project off the ground. It is currently possible to purchase these tokens through Moonbeam’s website:

Until the ICO is over, it is not yet possible to buy GLMR tokens in traditional ways. This can make it difficult for beginners to buy Moonbeam tokens as the way this should be done is quite complex. In addition, there are often warnings about ICOs, because there are many scams within this form of raising money.

It will also be possible in the future to buy GLMR tokens from the major and traditional crypto exchanges. However, we advise you not to do this at any exchange. We recommend that you choose Bitvavo or Binance , because these exchanges are much safer than other crypto exchanges. In addition, they always offer high liquidity, which will allow you to buy and sell GLMR tokens at the best price.

Of course, it will also be possible to opt for a decentralized crypto exchange , such as Uniswap , Sushiswap or Pancakeswap . However, there is always a big disadvantage to a DEX. And that is that you have to go through many steps before you actually own your tokens. As a result, the chance that things will go wrong is much greater than with a central crypto exchange. That is why we also recommend that you choose Binance or Bitvavo.

How can I store my GLMR tokens?

When you buy GLMR tokens, you will need to keep them in a wallet that supports GLMR tokens. This is in many cases a hot wallet. However, this is not always the best and safest choice. It is much more sensible to store your GLMR tokens in a cold wallet, also known as a hardware wallet .

Is it smart to invest in GLMR?

Once Moonbeam has been launched, you can determine the best price to buy Moonbeam by means of a technical analysis . You then calculate by means of the price whether it is smart to buy GLMR. It is also possible to perform a fundamental analysis, where you will look at everything related to GLMR. Think of the functions of the project, the team and the market in which the coin is located.

It is not yet possible to view the actual price of Moonbeam. This is because the project has not actually launched yet, and is still in its ICO phase. In the future, Moonbeam’s course can be followed through various channels. Think, for example, of CoinMarketCap. You can preview the information about this project on CoinMarketCap here:

Moonbeam has the ambition to bring together the best of both worlds, a blockchain that is fully compatible with Ethereum and uses the many features of the Polkadot protocol.

Individuals and teams looking to build applications with Moonbeam can take advantage of the specifics of Polkadot’s parachains while reaching users and resources on other chains.

Like Kusama is with Polkadot, Moonriver plays a leading role in the successful development of the parachain, namely Moonbeam. This sister blockchain provides the perfect testing environment for Moonbream to evolve in a healthy and thoughtful way.

In addition, Moonbeam gives governance rights to GLMR token holders, in addition to a staking function to passively generate income. The gradual destruction of GLMR tokens over the long term is a valuable attribute that will help make the token rarer over time.