About 90% of the current internet is used by users for social networking. The infrastructure of these social networks is something that we can no longer ignore. Web2 (today’s internet) is nothing but one big tech after another big tech. You have to give up control over your own autonomy in this way. Competing with these tech giants seems unfeasible and various problems have also surfaced in the social networks. Payments abroad are almost impossible, there is no permanent storage of files and a secure encryption is also missing in most cases. The big boys make money from our data and our work. We have little power to stop and change this. Let that be exactly what Mask Network is going to do something about.

Please note: keep in mind that the text below about ‘Mask Network (MASK)’ as well as the explanation thereof should in no way be construed as advice. The choice for whether and in what way you want to trade (crypto) and which choices you make in terms of investment is up to you and you alone. We are not financial advisors.

Here you can first watch a video showing how Mask Network works.

Mask Network came out in 2019. The protocol allows you to send encrypted messages, dApps (DeFi, DAO and NFTs) and cryptocurrencies via social networks. They want to do this directly over the top of social networks without migrating. They want to create a decentralized Applet (DApplet) ecosystem . According to their own media, they simply want one thing! They want to build a bridge between the new, open internet (Web3) directly on top of the current (Web2).

The great thing is that they don’t want to set up a new platform for that. Mask Network wants to bridge the gap between Web2 and Web3. They thus enable the general public to use the better web within today’s common platforms. This without using an API or centralized server.

Their focal points will include E-commerce and personal finance.

This means bringing together decentralized payment and storage. Along with more privacy control and without censorship. These could then be factors that will change once and for all the current structure of how multimedia content is distributed and how E-commerce takes place on the Internet.

They want to help you turn your financial online trading and walking to your advantage . There is already a widget that allows you to trade via CoinMarketCap and UniSwap . You can send payments, trade with tokens, borrow, place bets on live events, spend your personal tokens or have your portfolio analyzed on a professional basis. All this without having to leave your social media.

Mask Network therefore does not set up a new platform, but makes something that can run directly on top of it. With the help of cryptography and the Web3 technology (including blockchain , decentralized storage and peer-to-peer networking, etc.), they can get this job done. This also means that they do not intend to replace the Facebooks, Twitters and Instagrams of this world. It is far too difficult to convince users of these platforms to switch platforms. Instead, it is better to build a bridge. They will do this with a decentralized Applet (dApplet) ecosystem.

We are working hard on the high gas costs of the Ethereum network. They also want to introduce a smart wallet so that private keys are no longer needed. Furthermore, they are also working on setting up a fiat onramp so that users can pay for crypto services or financial apps without any problems.

Below you can see schematically the bridge between Web2 and Web3. 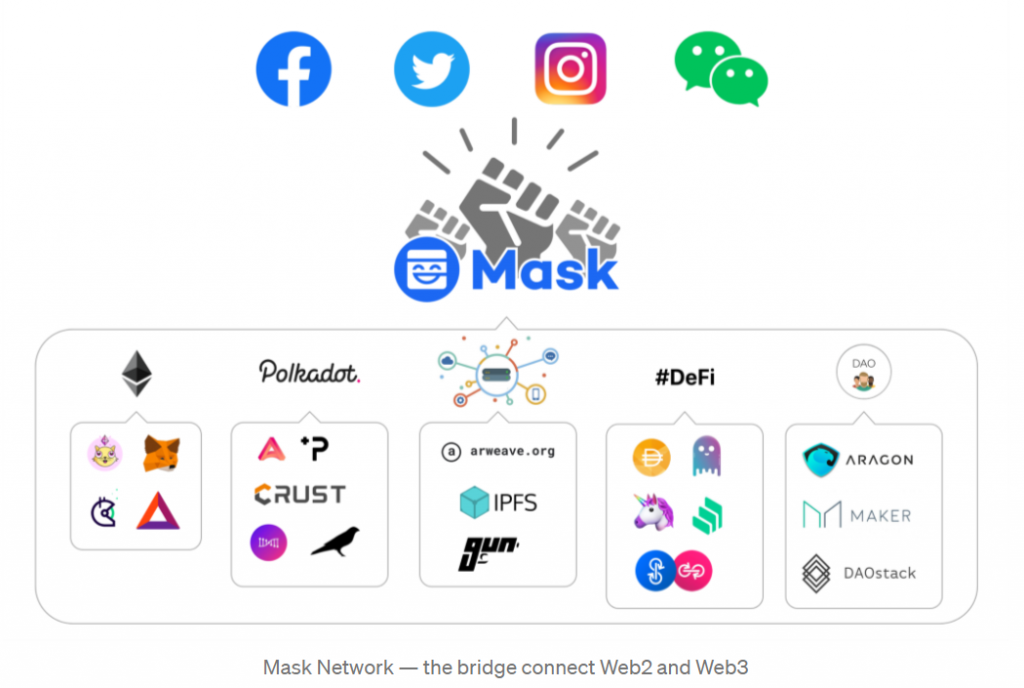 How does Mask Network work?

What makes Mask Network unique is that you can add an extra layer of privacy to your online social media life. Currently only on Facebook and Twitter, but more platforms will follow. For this, an end-to-end encryption is used for transferring information and also ensures that all information is interpreted correctly. This encryption is ‘asymmetric’. To keep things simple, this means that with the public keys you can do the encryption and with your private keys you can do the decryption.When you send a message via Mask Network, your message is encrypted with the public keys of the recipient. As soon as the encrypted message arrives, the app uses the extension to decrypt it with the recipient’s private keys.

Below you can see the encryption and decryption clearly, although it is explained a bit technically. 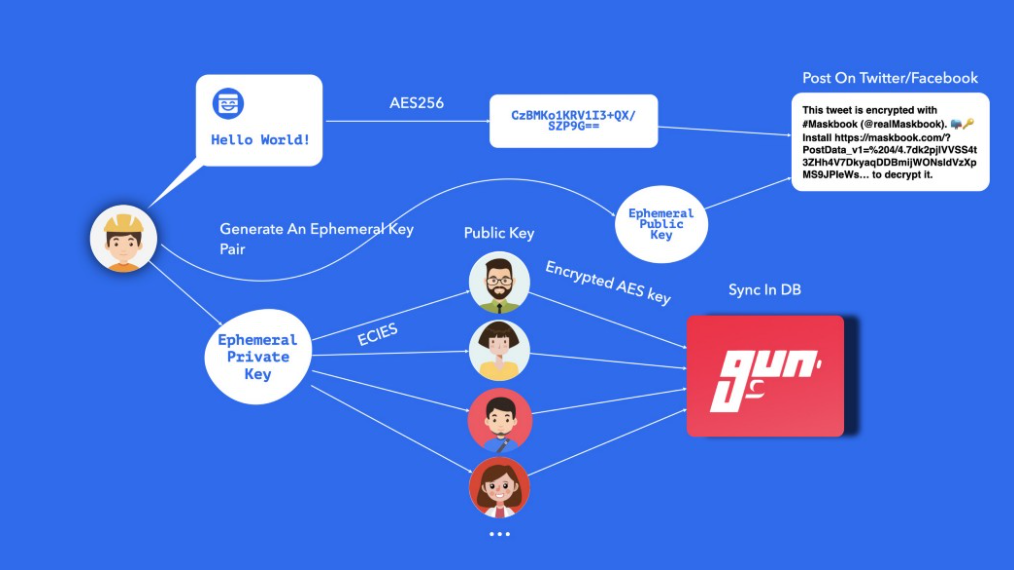 Besides this encryption method, you can do even more with Mask Network.

Applets already in use

It is still a fairly young project, so there is still plenty to build and carve. There is a Holoflows kit, which makes all this possible. It allows you to communicate directly with the web in an easy way with fewer restrictions. For example, a blockchain wallet has been built in for all blockchain-related functions. Several applets are already in use.

For example, you can use an Ethereum ‘red packet’, with which you can wrap any crypto currency in an Ethereum smart contract. Then you can send this red packet as a Tweet, so that the Mask Network participants with the correct permissions can receive and extract this packet.

Another applet is the Gitcoin exchange. The Mask Network will recognize all Tweets with a Gitcoin URL, and can immediately set up a UI in the Tweet. Now you can fund money in the Tweet mentioned scholarship.

There is also an applet that recognizes if a token hashtag starts with the dollar sign ($). If you hover your mouse over the hashtag, you can see all kinds of information about that token. You can see the market trend, which exchange the token is listed on and there is the option to trade directly with the token via a UniSwap interface, as long as it runs on Ethereum.

All of these options are immediately available to you when you’re on the Mask Network, without having to install anything extra.

What is an ITO?

An ITO is an Initial Twitter Offering. So it’s almost like an ICO , IDO or an IEO. You can participate in the issue of a coin directly via Twitter, without having to leave Twitter. This is made possible by the decentralized applet infrastructure. It allows you to display any dApp on top of an already existing web-based social network. The fiat onramp aggregator is called ‘Transak’, and people around the world can now participate in an initial offering. This can be done directly via Twitter, and without them ever having crypto in their possession beforehand.

This is much easier than the sometimes complicated ways to participate in an IPO/IEO. First of all, a KYC is required here.

The ITOs can then be for different types of financial resources. An already existing token can create a second offering of tokens, for loyal followers. A new token can choose to run the first offer exclusively via Mask and Twitter. You can also spend your own token, or drop an NFT.

Who is on the team behind Mask Network?

The company’s LinkedIn page also lists 16 people who come from all over the world. On their own website 3 people are mentioned, under a pseudonym it seems, but there is not much information to be found.

What is the MASK token?

The MASK token is an ERC20 token. It is the native token of the Mask DAO . If you own MASK token you are also a member of the DAO and you are part of the administration of the MASK Network . Each MASK token is one vote. In order to vote, you must stake your tokens for seven days before a voting proposal goes into effect and you can cast a vote during the voting period.

Below you can see the token distribution. This was for the ITO (Initial Twitter Offering). What is striking again is the relatively small percentage that the team gets. This shows that the team is not only interested in money, but also really wants to get the project off the ground. 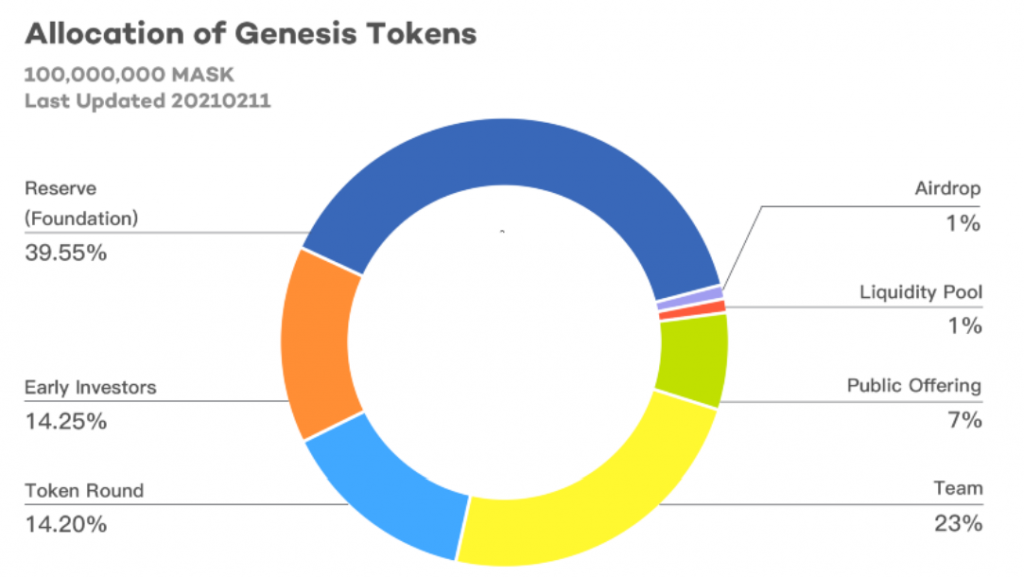 The release of the MASK token is also over a longer period of time. The token will be unlocked until 2023. 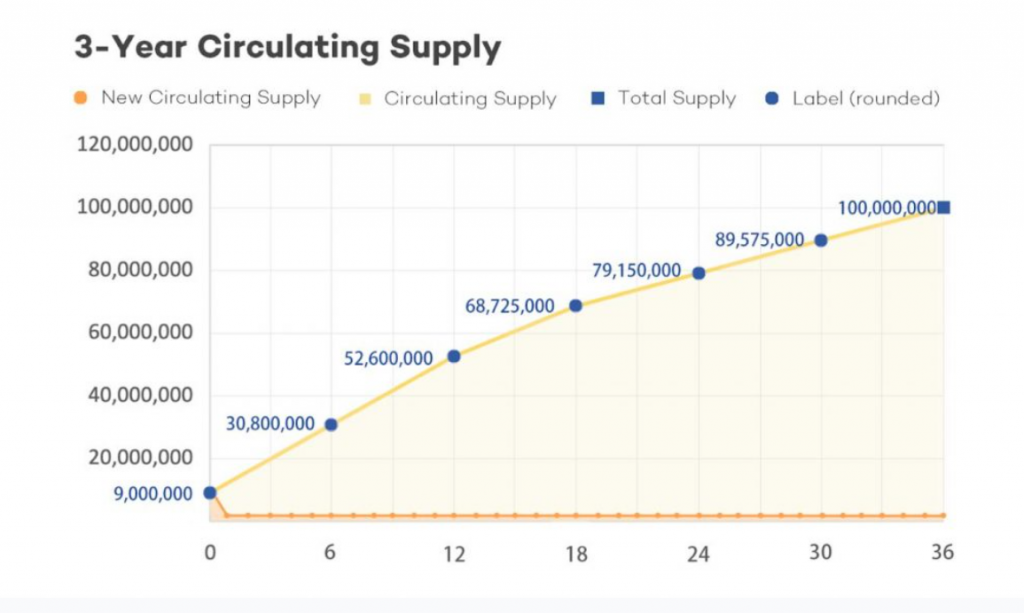 What is the price of the MASK token?

If you want to invest in the MASK token, a good start is to know what the price is. If you are already going to trade, you also want to make a profit. You can make a technical analysis to see what the best buy or sell moment is.

The MASK token entered CMC on February 24, 2021 and immediately reached its ATH a day later on February 25 at $31.06. After that, the price slumped a bit, before peaking again to $25 in April. The price then gradually went down again and between May and August the price was red. At the end of August there was another short peak. At the time of writing, September 2021, the price is $8.32.

At  CoinMarketCap  it is neatly between place 200 and 300 in place 252. This coin does not seem to have a good prospect at the moment, it is in the red again. However, I do think that he can still experience a good price development. That will depend on how the roadmap develops. If you want to invest in this coin, it is important to do your own research.

Where can you buy the MASK token?

The MASK token is for sale on Bitvavo  . Bitvavo has included this coin in its offer at the end of August 2021. Most leading CEXs also offer this coin, such as Binance , Gate.io and KuCoin . There are also many liquidity pools on DEXs like Uniswap where you can find a MASK pair.

What is the best way to store the MASK token?

If you want to go for the most secure storage option, it is best to choose a hardware wallet . As the name suggests, this is a wallet in the form of a USB stick. You can therefore completely disconnect this wallet from the internet. The moment you have not linked the wallet to a computer, it is impossible for hackers to get into the wallet. Of course you still have to store the wallet in a safe way. The most popular hardware wallets are from Ledger, the X or S version or from Trezor.

You can of course leave your MASK token on the exchange where you bought the token. However, now you do not have access to your private keys. The private keys of an exchange remain in the hands of the exchange itself. The danger of a hacked exchange is always there and then you have a chance that you will lose your coins. These wallets on an exchange are also called hot wallets .

Mask Network is an interesting project offering a peer-to-peer encrypted messaging service . They continue to build cash dApplets, so that blockchain-related functions can be offered. At the moment it is only available for Facebook and Twitter, but it is very easy to use. You can install an extension on your web browser without any problems. This is how you bring decentralization to a centralized network such as Facebook or Twitter.

The possibilities of this project can still be expanded considerably , so NFTs are also in the planning. It is still a young project, and widespread adoption of the project seems a long way off at the moment. However, as soon as Mask Network accelerates and becomes more widely known, as more dApplets are built and in use, the MASK token may also see a significant positive price change. So keep an eye on this project, and if you want to invest in the MASK token, do your own research first.