Eco is a term we should all take to heart. The global environment has been in bad shape for some time now, and it seems that one doomsday scenario is worse than the next. In any case, I am convinced that the greenhouse effect and global warming are serious problems in our society. In order to be able to implement policy, legislation, investments and tax in the social domains, information is needed. With this information you can find connections, identify trends and show patterns. Let’s just have a Dutch project working on that, and be good at it too. LTO Network is located in Amsterdam, is Dutch and provides solutions in the form of blockchain technology.

I am pleased to announce that in this blog I will be talking about the LTO Network and the LTO Token. I am going to explain to you what the LTO Network is exactly and how it works. We will also take a look behind the scenes at the predominantly Dutch team on this project and take a closer look at the LTO rate. I will also tell you where to buy the LTO token.

Please note: keep in mind that the text below about ‘the LTO Network (LTO)’, as well as the explanation thereof, may in no way be construed as advice. The choice for whether and in what way you want to trade (crypto) and which choices you make in terms of investment is up to you and you alone. We are not financial advisors.

Here you can first watch a video showing how the LTO Network works.

What is LTO Network?

The LTO Network is a hybrid blockchain designed for reliable B2B (business-to-business) collaboration . They have a public section that serves as an immutable digital notary. However, there is also a private section that deals with process automation and data sharing . In the private part, you can then find each process on a thumbnail and ad hoc, permissionless private blockchain. Due to this hybrid approach, the LTO Network simply complies with the GDPR (General Data Protection Regulation) and data security laws. The GDPR is an EU law on data security and privacy. What is also not unimportant is the fact that the LTO Network is therefore also scalable and ready for use.

The project has been up and running since 2014, then under the name LegalThings. A turning point was participating in and winning a hackathon organized by the Ministry of Justice in the Netherlands. During this hackathon, they showed that a complete legal process can be digitized as an FSM (Finite State Machine) and stored on the blockchain. They were able to do this because they shared their data and business logic with competitors and governments. For example, 14 euros are saved per process. This is mainly due to waste transport between the Netherlands and Belgium. Below is an interesting video about it.This led to the assignment to design the first digitized legal methods for the Dutch legal system on the blockchain. They did, and today the Ministry of Infrastructure saves 7 million euros a year.

How does LTO Network work?

The main users for the LTO Network are business customers. It is then important for these customers to discontinue LTO tokens. This ensures better stability and functionality of the network. This improved stability in turn brings more customers for LTO. Furthermore, it is of course also true that the more tokens one stakes, the more difficult it becomes to carry out an attack on the network, and the security of the network increases.

LTO has also built this into the network design. They have a so-called ‘troll bridge’, or troll bridge, which imposes a kind of tax when you convert tokens from the mainnet (that you stake) into ERC20 liquidity tokens, which are used for trading. In the meantime, the network has become so large that this troll bridge has actually become redundant. This cost or ‘tax’ was completely incinerated. As many as 50 million tokens were burned in June 2020, and 81 million tokens were locked for mergers and acquisitions in 2021 or later. As LTO itself says

“ We do not rely on sales proceeds to continue the operations and network growth ,  so we have committed to a long-term lockup, to strengthen the community trust in the project. †

To pay on the network you need the LTO token. There is one LTO token for mainnet use, but there are also three other tokens. These are exchangeable token types that can be redeemed 1:1 with the LTO token: BEP2, ERC20 and BEP20. The mainnet tokens are not tradable, but the other tokens are.

There are three products that the LTO Network offers to users.

Below you can see the three products.

So we actually see fairly ordinary tasks that can be performed, but on a blockchain. Two different hybrids stand out. Earlier I talked about the two different parts of the blockchain that the LTO Network uses, a private part and a public part.

What makes it special and unique, however, is the hybrid between terms of ordinary business opportunities supported by cryptocurrency transactions. Two things stand out here.

Who is on the team at LTO Network?

The LTO Network team has many Dutch people in its ranks . There is a lot of knowledge in the team, in all kinds of areas, which is of course useful.

Their website lists 11 other people on their team, with varying roles. Marketing, blockchain developers and back- and front-end developers. An experienced team that has been keeping the project running for a few years now.

What is the LTO Token?

The LTO token is an ERC20 token, but can also be a BEP20 or even a BEP2 token . These three tokens can be traded. There is also another LTO mainnet token that cannot be traded . I’ve explained before how this stem sits in the fork.

The total and maximum stock is 403,247,855 LTO and there are already 293,170,118.62 LTO in circulation, this is 73%. The amount of tokens in circulation hasn’t caused the devaluation that was partially anticipated, so that’s a good sign.

The image below shows the distribution of the token. What’s good to see is that the team gets less than 20%, which reduces the risk of them running off with the money raised. 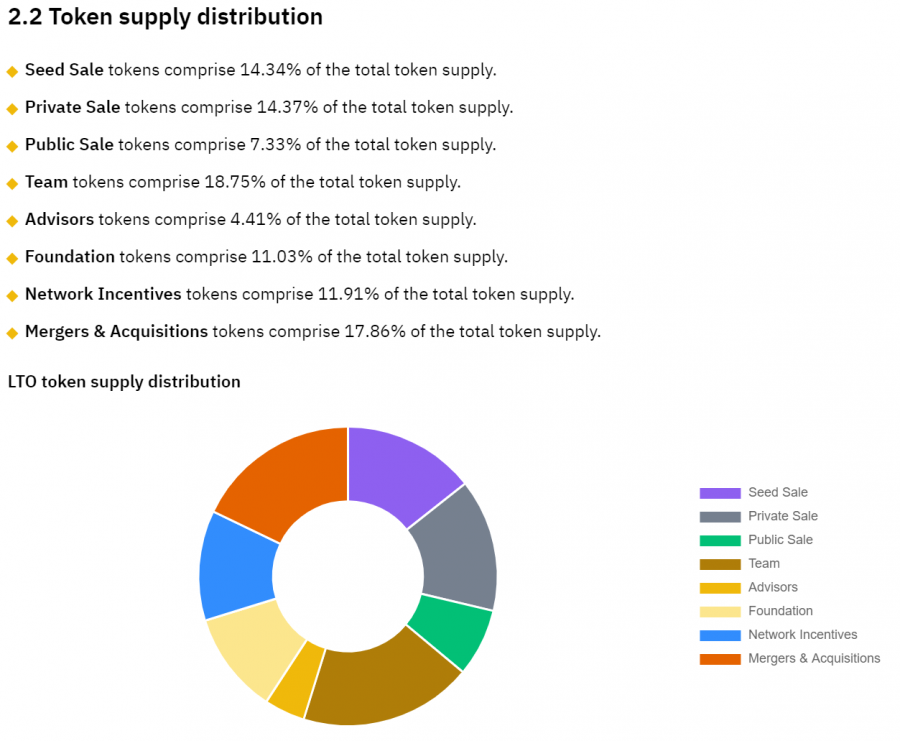 The token’s release schedule, pictured below, also keeps the team from getting their hands on all the money at once. These are important details and inspire confidence in a team and the project.

However, there is one potential drawback associated with the token. In the US crypto market, the SEC (Securities and Exchange Commission) could have a problem with the token being a ‘security’. This is because they have a token that can be traded, and a separate token that you can stake. This could potentially have a negative effect on trading on American crypto exchanges.

What is the price of the LTO token?

If you want to invest in the LTO token, a good start is to know what the price is. If you are already going to trade, you also want to make a profit. You can make a technical analysis to see what the best buy or sell moment is.

At  CoinMarketCap  , it is just outside the top 400 in place 425. I think this coin has a good prospect, especially if Bitcoin continues to rise in 2021. In 2021 this token has developed well and is climbing out of a trough. I think there is a good chance that this token will continue this positive trend. However, if you want to invest in this coin, it is important to do your own research.

Where can you buy the LTO token?

The LTO token is for sale on Bitvavo  . Bitvavo has included this coin in its offer at the end of August 2021. Most leading CEXs also offer this coin, such as Binance and  Gate.io. There are also many liquidity pools on DEXs such as Uniswap , PancakeSwap and Binance DEX where you can find an LTO pair. In the Netherlands and Belgium it is easiest to buy the LTO token on Bitvavo, so click on the widget below.

What is the best way to store the LTO token?

You have several options to store this token. The safest way is to store them on a hard wallet , also known as a cold wallet . With a hard wallet, such as the Ledger X or S and the Trezor, you are protected against internet hacks.

You can of course leave your LTO token on the exchange where you bought the token. However, now you do not have access to your private keys. The private keys of an exchange remain in the hands of the exchange itself. The danger of a hacked exchange is always there and then you have a chance that you will lose your coins. These wallets on an exchange are also called hot wallets .

What is the roadmap of the LTO Network?

The LTO Network has been making progress since 2014 (then under the name LegalThings). So a lot of work has already been done. What is good to see is that the roadmap will continue until 2022. The team is not resting on their laurels, but is working hard. I also think that more applications can be found for this project. 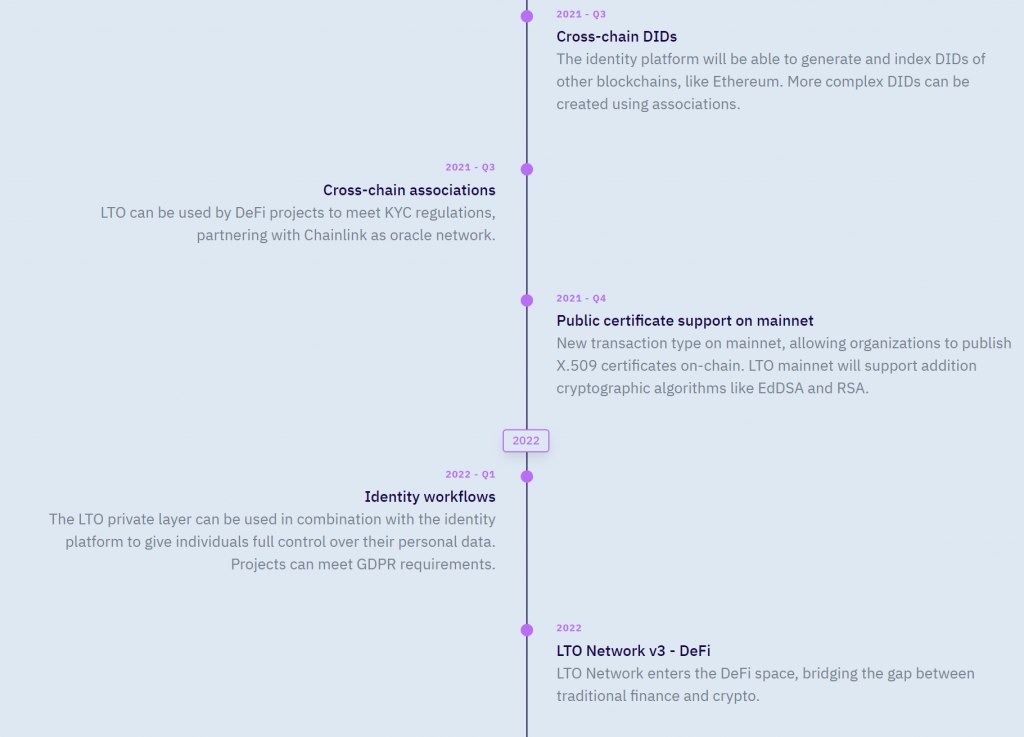 Firstly, it is of course nice to see a Dutch project that is also doing well. The team has found a good solution to set up a simplified workflow for B2B. This has already resulted in annual savings of 7 million euros for the Dutch Ministry of Infrastructure . You would almost think that such a success should be imitated.

The only downside is the build of their token, with three different tradable tokens and a mainnet token. Still, I think the future looks bright for this project. They have easy to understand products that have good applications. The project is also very transparent, which is sometimes lacking when you look at other projects. The team is innovative and works hard to bring an even better product to the market. Chapeau to the boys in Amsterdam. Keep working hard to get more customers and who knows what this project will eventually lead to!

If the project does indeed gain popularity, it will also have a positive impact on the LTO token. That’s no guarantee though, the best projects on paper sometimes don’t work in practice for some reason. However, everything seems to be going well with the LTO Network. If you want to invest in the LTO token, do your own research first.