The fact that DeFi is extremely popular in 2021 does not need to be explained anymore. The trend that started in 2020 has been followed by the superlative in 2021. It is also possible that DeFi will continue to grow and gain even more popularity. There are many benefits that DeFi users can take advantage of. However, that doesn’t mean it’s all roses and roses in the DeFi world. One of the drawbacks of DeFi is the lack of identity checks on unique wallet addresses. Nobody is thinking about that and it is an important aspect to allow DeFi to continue to grow. None, except a small village in Gaul, present-day Brittany, oh no, wait a minute. So I mean, nobody except the Litentry network.

Please note: Please note that the text below about ‘Litentry (LIT)’ as well as the explanation to it should in no way be construed as advice. The choice for whether and in what way you want to trade (crypto) and which choices you make in terms of investment is up to you and you alone. We are not financial advisors

Here you can first watch a video showing how Litentry works, in a short and clear video of about five minutes.

Litentry is a cross-chain identity aggregator. That is quite a mouthful, but that means that you can collect and manage decentralized IDs or DIDs (Decentralized identifiers) on all kinds of different blockchains. On blockchains, we are mainly talking about wallet addresses. Rest assured, Litentry will not be able to expose your real identity, because that is something that is not possible with blockchain technology. But what identity are we talking about?

In this example we can say that an identity nowadays is no more than a collection of digital data of a real person. If you always pay your bills neatly at Bol.com, you might get a better credit. With Alipay you can get a microcredit in this way or qualify for free loan services. Another example is that you can log in to various websites with your Facebook account. This is a cross-platform identity, and is often used and implemented in web 2.0 apps, probably without you even realizing it.

This data is not only collected by information that you enter into the system as a user. There are also scripts that monitor user behavior and passively collect this information. This information is often used without your knowledge, for example by selling your e-mail address. That is one of the reasons why you sometimes receive spam emails.

The next web generation, web 3.0 , will be influenced by blockchain technology. Blockchains are pseudo-anonymous, which means that you cannot monitor an identity profile like on web 2.0. The cross-platform identity is therefore also put to an end on the blockchain. The disadvantage of this is that you as a user are offered less convenience.

More importantly, it is now harder to verify and accredit an identity. Let’s take a look at a few examples of how that works out on a blockchain.

How does Litentry solve this identity problem?

Litentry can solve the identity problem by combining different accounts on different blockchains . In this way more information about the accounts can be derived and the problems are solved. This is made possible by the fact that the characteristics of an on-chain identity today are more than just a token transaction. You can also use it to crystallize characteristics of the identity. Let’s make this clear with an example.

To see if someone is an LP (liquidity provider) on Uniswap in the long term, you can check the liquidity deposits and withdrawals. You can also find out whether someone with a certain wallet address is also active with on-chain management on, for example,  Polkadot . You can view the date the wallet address owner was nominated and see if he or she votes.

The following image shows the cross-chain identity with Litentry.

Another important thing to mention is that Litentry runs on the Substrate . This is the most advanced platform to build blockchains on. The plan is to eventually launch Litentry on a Polkadot parachain. The advantages of this are that Polkadot has great scalability and DApps built on Polkadot are interoperable. This is of course of great advantage and also necessary to perform the cross-chain identity. In addition to DApps on Polkadot, DApps built on Ethereum , Filecoin or Cosmos can also use the DID system developed by Litentry. See also the image above.

How does Litentry work?

Litentry will start working with the mobile app at the center. This is then linked to the Litentry network so that you can not only participate in the management process, but also have access to Identity-Based Services. You will then be given a unique ID, and this is the only information that will be shared, not information about yourself. The app is then linked to other networks, but also, for example, to more traditional verification systems, such as Twitter or LinkedIn. It can also be used as your wallet to manage all your identities and you will find the Litentry authenticator there† This is your mobile ID and the data hub for your Web3 ecosystem. For example, you have a hub of decentralized web apps where you can also find 2FA (two-factor authentication). It even works without a password or registration.

The Litentry runtime protocol is now able to connect your account across various blockchains with your unique ID. This unique ID allows you to approve transactions associated with your account using your private keys. So you share your data, but in a private way. If you want to apply for a credit, you can also use the ID.

For the developers there will be an SDK software development kit . This enables them to build client-side apps on top of the Litentry network, in Javascript.

The Light Client Services makes the mobile app independent of third-party servers. This means that these apps can connect directly to the Litentry network, without being dependent on nodes. This is important for trust and the decentralized character. Malicious nodes cannot now pass false information to you. 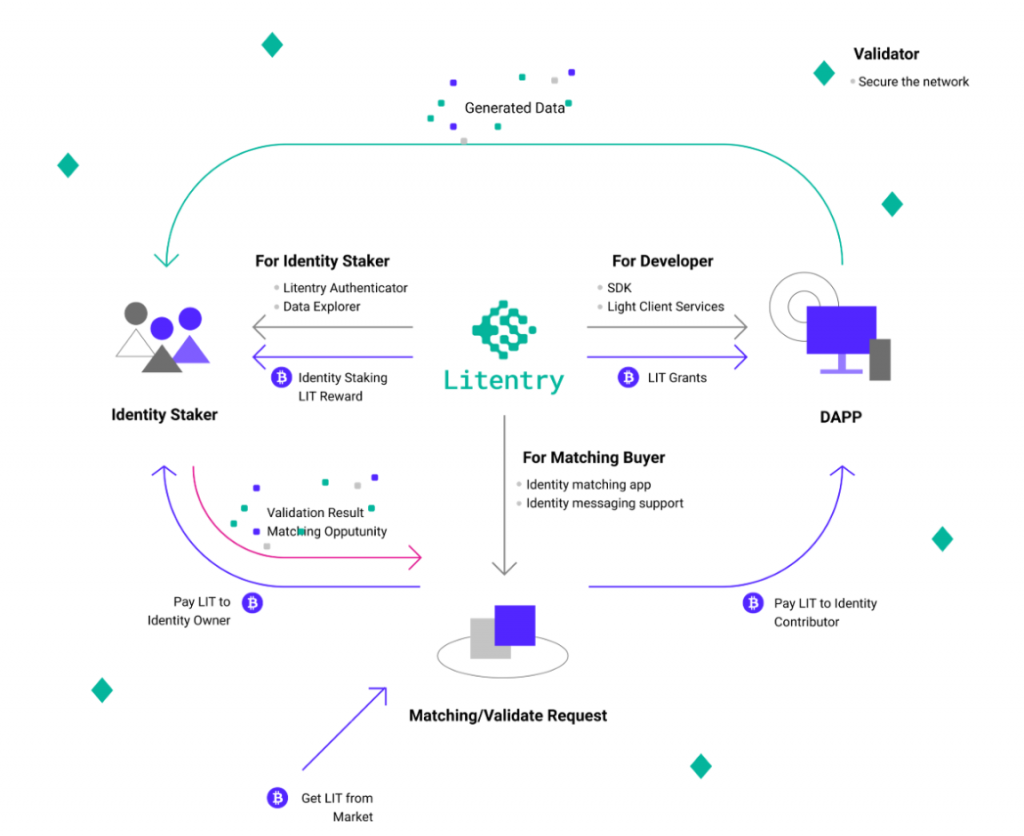 Who is on the Litentry team?

The 11-member team of Litentry is based in Berlin, but has a Chinese background.

Other than that, not much is known about details of the team.

What is the LIT token?

The LIT token is the native utility token for the Litentry network and has several uses . It can be used to pay costs, to strike, or to use as collateral. It’s a DeFi protocol, so it shouldn’t come as much of a surprise that it’s also used for network management. You can also use the LIT token to pay out grants to developers on the network.

The tokenomics can be found in the image below, from the lightpaper. 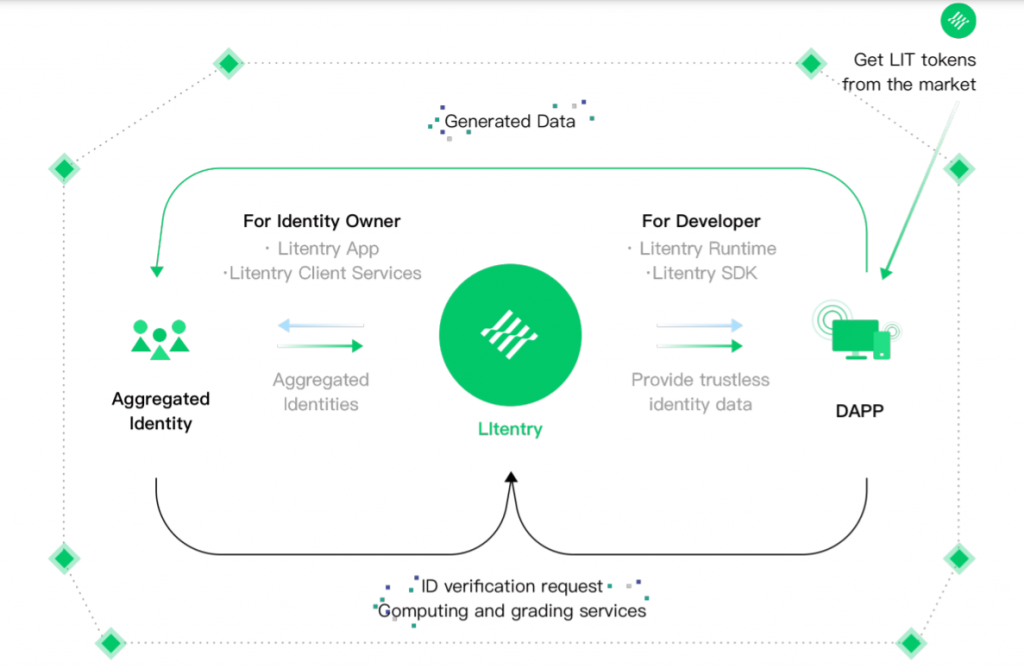 Below you can see the distribution of the tokens. It clearly shows that the team is getting a fair share, so there’s no immediate danger of them getting a large share of the tokens. 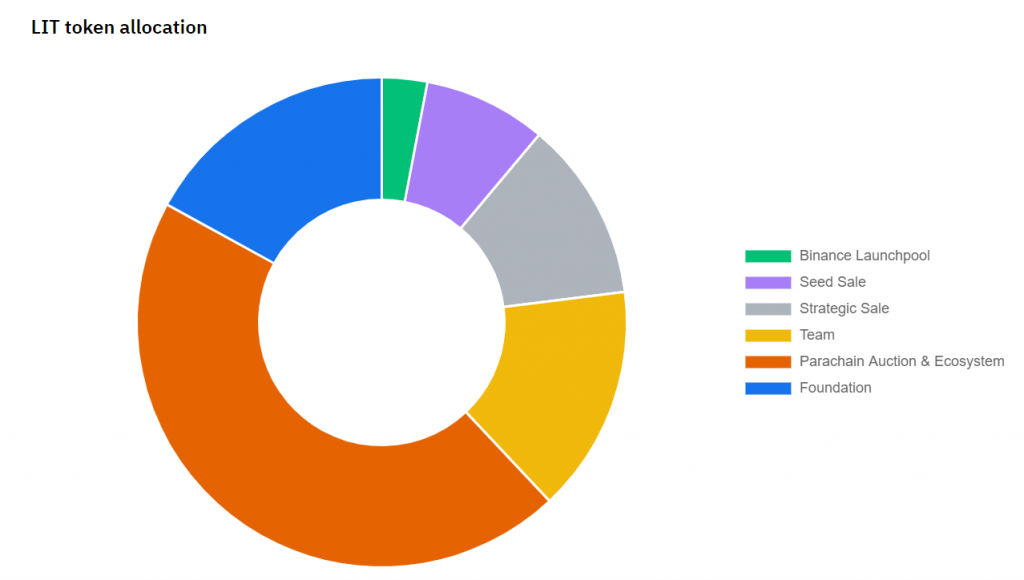 What also helps is the release schedule of the LIT token, which is spread over several years.

What is the price of the LIT token?

If you want to invest in the LIT token, a good start is to know its price. If you are already going to trade, you also want to make a profit. You can make a technical analysis to see what the best buy or sell moment is.

Almost immediately after the ICO in January and February 2017, the LIT token already reached its preliminary ATH on February 16, 2021 with a price of $14.66. The opening price was $4.33 on February 4. After that, the price also fell again and between mid-March and mid-April 2021, the price peaked between $12 and $13 a few times. In mid-May, however, it declined well, reaching $2.06 as a preliminary low. After that, the price steadily rose again, until BTC fell 19% in value within a few hours on September 7th. At the time of writing, September 2021, the price is $3.80.

At  CoinMarketCap  , it is just inside the top 400 at 377th place. This coin has a good long-term outlook in my opinion. Aside from Bitcoin ‘s possible fall or rise , the fact that they want to build on Polkadot is very positive. Polkadot is the rising star in August-September 2021. But what may be even more important is the fact that no one is tackling this problem. The more DeFi grows, the more demand there will be for this project, and that will only positively influence its effect on the price. That seems a fairly logical consequence. If you want to invest in this coin, it is important to do your own research.

Where can you buy the LIT token?

The LIT token has been on sale on Bitvavo since September 8, 2021  . Most leading CEXs also offer this coin, such as  Binance , and Gate.io. There are also several liquidity pools on DEXs such as Uniswap where you can find a LIT pair. Click below to buy on Bitvavo.

What is the best way to store the LIT token?

You have several options to store this token. The safest way is to store them on a hard wallet , also known as a cold wallet. With a hard wallet, such as the Ledger X or S and the Trezor, you are protected against internet hacks.

You can of course leave your DENT token on the exchange where you bought the token. However, now you do not have access to your private keys. The private keys of an exchange remain in the hands of the exchange itself. The danger of a hacked exchange is always there and then you have a chance that you will lose your coins. These wallets on an exchange are also called hot wallets .

Litentry is still a young project, so there is still a lot of work to be done. The team has two different roadmaps, one for the runtime upgrade and one for the mobile engineering. If you look at how serious the team has been doing so far, it looks like they’ll do their best to get this roadmap done right as well. There are no dates mentioned on the roadmap. You will have to keep an eye on their social media channels for updates. 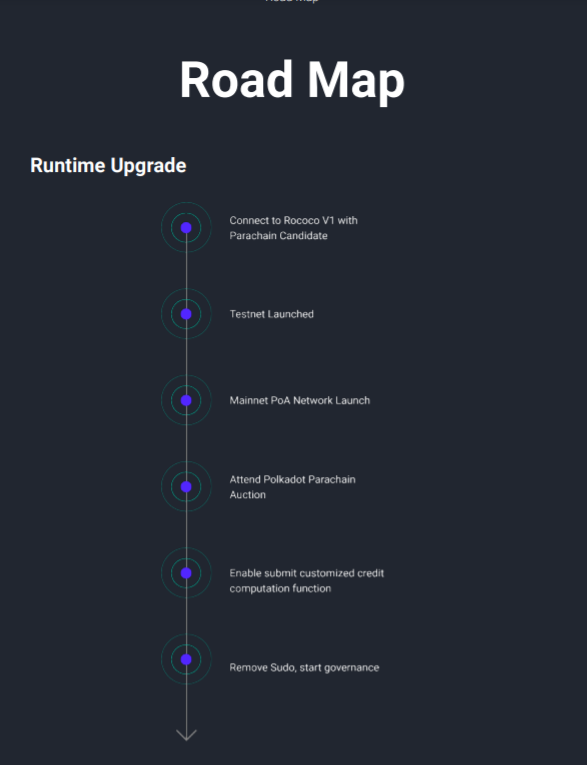 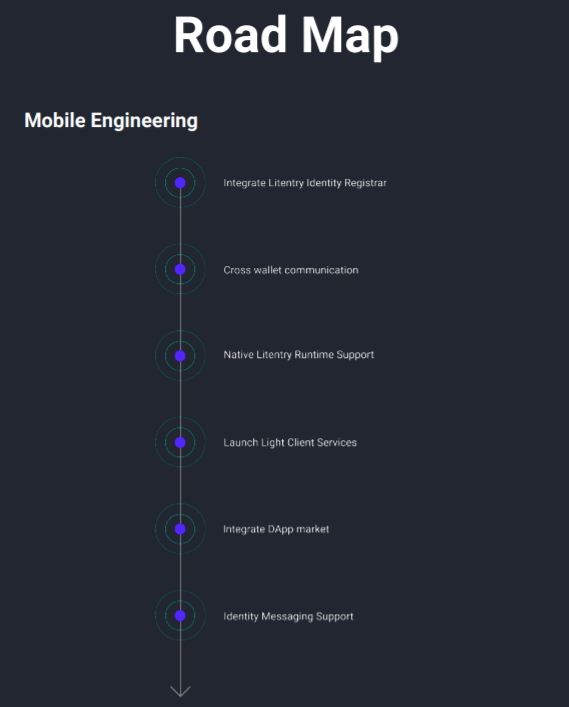 The first thing we can say about Litentry is that no one else is working on this issue, and that’s what makes them unique. It is also a problem that certainly needs to be solved in the future, so as not to hinder the further development of blockchain technology . I have presented several arguments why it is interesting for users and crypto projects to have cross-chain ID solutions. Think, for example, of DeFi credits that you can get with Litentry without or with little collateral.

Litentry is a promising project, with a problem they want to solve that is a bit overlooked. The fact that they ‘re going to build on Polkadot makes it even more appealing because that’s a project that’s also in the spotlight. The interaction between the two projects can benefit both.

The team has already put a lot of good work into this project, with a token that also has many uses . Unfortunately I can’t guarantee whether this project will succeed or not, but all signs are best guess. If the project does indeed become as popular as I expect, then the LIT token will also make a nice price development. If you are interested in investing in the LIT token, do your own research first.