KuCoin is one of the world’s leading crypto exchanges based on number of users and average trading volume. The exchange opened in September 2017 and accepts users from over 100 countries. KuCoin has an easy-to-use interface that makes this exchange gaining popularity every day. Through their native KuCoin Token $KCS, users get numerous benefits on the exchange. Discover in this blog why trading on KuCoin is definitely worth it!

KuCoin is an international exchange based in Seychelles, with offices in Southeast Asia and China . Since the exchange’s launch in 2017, KuCoin has grown into a very popular exchange platform with a large number of cryptocurrencies.

KuCoin is known as the number one competitor to Binance because they offer similar services. What sets KuCoin apart is that they give back no less than 90% of all trading costs to the community. This is all done by their native token KuCoin Shares (KCS).

Through CoinGecko, KuCoin ranks 14th among the largest exchanges worldwide with a trust score of 9 and a 24-hour trading volume of $1.8 billion. Trade as many as 418 different coins based on 814 trading pairs.

Although KuCoin launched in 2017, the team had been working on blockchain technology much earlier. The platform was supposed to have been created in 2013, but it took the team years to fine-tune and optimize the exchange before it could go live in 2017.

An ICO was held for the development of KuCoin in 2017. During that time, KuCoin has developed and released its own KuCoin Shares ($KCS). KuCoin thus raised no less than 20 million dollars in funds. Despite being headquartered in the Seychelles, KuCoin is said to employ more than 350 employees, each with their own specialization.

The year 2019 was very important for KuCoin as they applied some upgrades that made it possible for its further development. They have launched the Platform 2.0 with a new user-friendly interface. In addition to the interface, more and more forms of trading became possible including futures and leverage up to 10x.

The ecosystem was given a boost in 2020 with the announcement of the Pool-X functionality that would allow staking on the exchange. A hallmark of KuCoin today is the wide range of fiat currencies you can trade with. Since 2020 you can even buy and sell crypto via your own PayPal account.

Sign up for free here and discover how you can enjoy trade discounts and earn passive income through KuCoin Share tokens ($KSC)! Does the link not work? Then use the following unique code: rJQSCNZ

By using the native coin of an exchange, you always get benefits. These are typically discounts on trading fees. KuCoin users also earn a share of the exchange’s global trading fees by staking their KCS tokens. This share represents 10% of the daily trading volume. The more trades are made, the greater the share of these profits. The amount paid out is proportional to the number of KCS tokens you have staked.

Example: You have 10,000 KCS tokens in your possession and KuCoin’s platform has a trading fee worth 20 Bitcoins, which is 10% of the daily trading volume. Here you will receive 0.001 Bitcoin, which is converted to KCS tokens per day. The rewards are paid out on a daily basis, so you will receive extra KCS tokens every day.

Not all KuCoin users get this bonus automatically. The requirements for this are:

An easy way to get a free KCS token is through the affiliate program. By recommending the exchange to friends and family, you will receive a share of the trading costs they incur on KuCoin, up to 20%!

The affiliate program has 3 different levels: 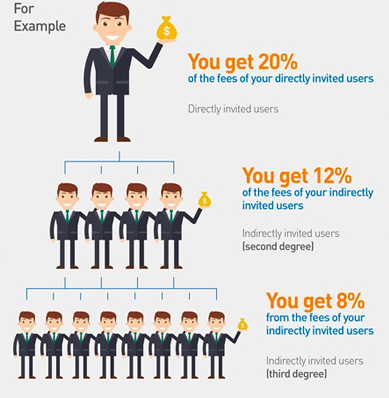 In concrete terms, this means that with the affiliate program you receive up to 40% of the trading costs from your affiliates. These are paid out in KCS tokens every two hours. In this way you receive free tokens and you also get all the extra benefits.

Pool X is a Proof-of-Stake ( PoS ) mining pool designed to provide liquidity for the crypto projects involved. With this you can earn extra interest on your crypto that use PoS and make yourself available in this Pool-X. Think of Zilliqa , TRX and many others.

Liquidity pools are a popular way to generate additional interest on your current assets. That is why various exchanges compete with an interest rate that is as attractive as possible to get the general public to their exchange.

By trading on KuCoin with your native tokens $KCS, you also get a discount on the trading fees. You must have at least 1000 KCS in your wallet to be entitled to a 1% discount. With a current price of $14, this means that as a user you need to have $ 14,000 KCS tokens in your wallet for this 1% discount. The maximum discount is 30% based on 30,000 tokens.

With the launch of the exchange, 200 million KCS were issued through a crowdsale. Each quarter, KuCoin uses 10% of its profits to buy back and burn these KCS tokens on a buyback and burn principle. Until there are only 100 million left.

This distribution of KCS tokens will cause token inflation. Each quarter, a minimum of 10% of the exchange’s net profit is used to buy back KCS tokens. These tokens are immediately sent to a burn address and thus immediately destroyed. The buyback and burning of KCS tokens will continue until there are only 100 million native tokens left. Below you will find an overview of the first five combustion rounds:

Despite these large amounts, only 10% of the trading fees go back to the exchange. The remaining 90% goes straight back to the community. This is done via the native token KCS which accounts for 50%. The remaining 40% goes through the affiliate program.

KuCoin is an exchange that owes its popularity to its low trading costs. The platform uses different tiers that each give an additional discount on trading. We only discuss the spot trading costs here, with both the maker’s fee and taker’s fee set at a maximum of 0.1%.

The more KCS you own, the less trading fees you pay:

As an investor, you naturally do not want to use many different exchanges unnecessarily. Ideally you want to trade your favorite crypto on one exchange. Still, every now and then it can be wise to sign up with an additional exchange.

Often we have to wait for a new crypto to be listed on an exchange. However, the slogan of KuCoin is “Find the next crypto gem in KuCoin”. We see more often that new, promising protocols are listed relatively quickly on KuCoin. You also want to invest early to maximize your profit. In practice, these are only later listed on other exchanges.

KuCoin has exactly the same problems that Binance has had in recent years, namely the issue of decentralization. KuCoin, like many others, is an exchange that is centrally controlled by one team. As the crypto ecosystem continues to evolve, there is an increasing demand for a decentralized variant of the exchange.

KCC is a decentralized public chain that mirrors the current KuCoin exchange. It aims to enable trading in a decentralized environment where users still have the benefits of using the KCS token. The token is the fuel and native token for KCC and can be used to pay for gas fees, among other things.

KCC has its own bridge that allows connection to the main network. With this, just like Binance, it wants to make a decentralized variant to make trading possible. To make this process easier, they developed this KCC bridge. It has only recently been in operation, since July 2021.

These are very nice developments that KuCoin successfully implements in a very short time. KuCoin is therefore seen as one of the best exchanges that you can currently use. The only thing holding back experienced trades at the moment is the lower volume on this exchange. Despite this, the volume is increasing and the popularity of KuCoin is rising.

KuCoin has a launch platform where they propose new promising protocols to the general public. In this way they hope to live up to their slogan so that you as an early investor maximize your profits through these ‘hidden gems’. Please note: To participate in this Spotlight, you must have completed your verification process. This is not necessary to simply trade on the exchange.

KuCoin uses the native token $KCS as the default currency with which you can invest in this crowdsale. With this, KuCoin wants to emphasize the importance of the native token.

Currently, KuCoin has already launched 7 projects through their Spotlight platform, including:

The Future of KuCoin

Last year in 2020, KuCoin’s trading volume increased by a whopping 217% and has supported 33 tokens and an additional 54 trading pairs. In contrast, when trading Futures, KuCoin saw a 420% increase in trading volume and a 670% growth in user numbers. These are promising figures that prove that KuCoin has a bright future.

With additional functionalities such as the Pool-X strike, it has already managed to generate around $7 million in passive income for the users of KuCoin. It therefore continues to place the community at the center of the further development of the exchange.

Their future strategy is twofold. They want to focus even more on finding and facilitating the hidden gem by listing promising protocols early on the exchange. In addition, they want to make even more use of their native token $KCS to offer users as much discount as possible so that investing on KuCoin Exchange is the best option at all times.

We see that each exchange uses its own native token to provide users with as many benefits as possible. At Binance we know this as the BNB token, where at KuCoin this is the KuCoin Share ($KCS) token. We’ve seen KuCoin focus on hidden gems while putting even more effort into using their own native token.

KuCoin aims to encourage this by minimizing the use of other currencies. For example, at SpotLight you can only participate using KCS tokens. Due to this marketing strategy, the burn and token policy and the further developments of KCC, this native token will only become more important in the future. It is an important link that makes trading on KuCoin attractive.