What is Injective Protocol?

Injective Protocol is a fully decentralized exchange built on Cosmos . If you didn’t already know; then remember that Cosmos is nothing less than one of the reference protocols for interoperability between the different blockchains of the ecosystem. For example, Cosmos is compatible with the Ethereum Virtual Machine (EVM). This system ensures portability of the most popular smart contracts in the ecosystem.

But for what? Well, just to enable you to interact with the most famous projects built on Ethereum, without being subject to the risks of network congestion and then insane costs!

Based on a “ Proof of Stake ” architecture, the Injective Protocol allows to combine both the non-custodial aspect dear to the greatest crypto experts with the security usually expected from the reference exchanges.

No compromise with the ideals of decentralization under the guise of better performance. With Injective Protocol you simply get the best of both worlds, without any problems.

Everyone will be able to participate. The goal is nothing less than to create a free and uncensored market where cryptocurrencies can be exchanged according to one’s wishes. But why not also other forms of value, such as futures contracts. For performance reasons, Injective Protocol will rely on classic blockchains, which provide stability and reliability. Also, there is the famous market making enable, synonymous with probable liquidity that is very significant!

Incubated by Binance Labs, Injective Protocol promises: Such proximity to such a historic well of liquidity is a dream come true! But that’s not all, as the other key partners within the ecosystem, as well as the prospects offered by fluid trading between interoperable blockchains, make the project a bet to follow.

As is now common practice, the protocol will rely on a utility token to offer decentralized governance, staking, and various rewards (such as affiliation or discounts on trading fees). It is therefore also possible to buy the token on the Binance exchange. Later in this article we will explain more about the places where you can buy these tokens.

It says a lot that such a project is supported by Binance, as it indicates that a large company with a high reputation within the crypto world has confidence in the operation of the project. Therefore, it can be interesting for investors to invest in this project, because there is a good chance that the project will be successful in the future. This is of course not entirely certain.

How does Injective Protocol work? 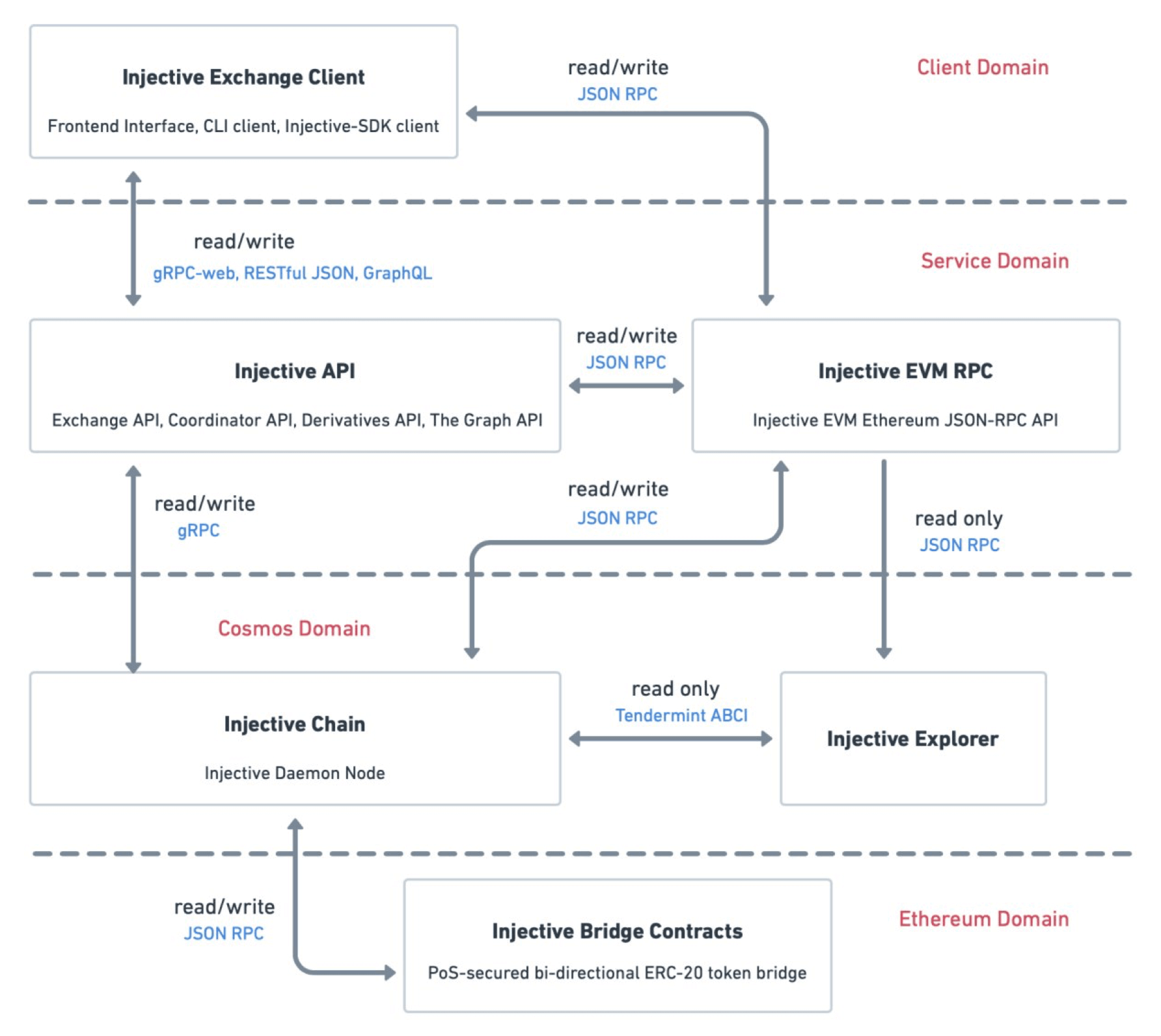 The Injective blockchain is the backbone of Injective’s layer 2 derivatives platform and houses a fully decentralized order book, a trade execution coordinator, an EVM execution environment, and a two-way token bridge to Ethereum.

The Injective blockchain supports smart contract execution through a modular implementation of the Ethereum Virtual Machine (EVM) on top of the Cosmos SDK (based on Ethermint). By deploying the EVM on Tendermint, users benefit from a scalable and interoperable Proof-of-Stake-based deployment of Ethereum.

Injective’s Trade Execution Coordinator is a decentralized coordinator implementation based on the 0x Coordinator specification. It protects front-running transactions and enables low-latency transactions through progressive rollbacks.

Injective provides an open-source front-end implementation that allows anyone to easily participate in the decentralized exchange protocol in a permission-less manner. The Injective Client is a graphical user interface aimed at the general public as well as more advanced users.

Injective API nodes serve two purposes: to provide transaction relay services and to serve as a data layer for the protocol.

While users can interact with the Injective chain directly, this is annoying for most users. To this end, API nodes provide users with a simple HTTP, gRPC, and Websocket API to interact with the protocol. The API nodes then formulate the appropriate transactions and pass them on to the injection chain.

The Injective Exchange API nodes also serve as a data layer for external customers. Injective provides a data and analytics API compatible with its interface.

The transition zone is based on Peggy (a Cosmos SDK application for arming and disarming assets in EVM-based POW chains) and is protected by Proof-of-Stake. ERC-20 tokens can be transferred to and from Ethereum to the Injective chain via the Injective Bridge.

INJ is the native token of the Injective Protocol and aims to fulfill a number of roles within the ecosystem. In total, there are 5 use cases for the token in the ecosystem:

Where can I buy INJ?

It is also possible to buy INJ on a decentralized exchange, such as Uniswap or Sushiswap . As we said before, the chances of a purchase going wrong are much higher on a DEX. You have to go through many more steps, which are difficult for some to perform. That is why it is best to choose Bitvavo .

How can I store my INJ tokens?

If you want to keep INJ in a wallet, you can do this in most cases by using the wallet of the crypto exchange you use for your purchase. Think, for example, of the wallet of Binance or Bitvavo. It is also possible to store INJ in a MetaMask wallet. Since the INJ tokens are ERC-20 tokens, you can store them in almost any wallet. This is because Ethereum projects are the most common projects. So you really never have to worry about this.

However, storing your tokens and coins in a software wallet (also called a hot wallet) is not the best and safest way. This is because these wallets are connected to the internet at all times. This means that there is always a possibility that hackers can get into the wallet. And that would mean that they also have the chance to steal your INJ tokens.

Would you like to keep your INJ safe? Then it is better to use a hardware wallet , which is also known as a cold wallet. These wallets are many times more secure than a hot wallet , because they can be disconnected from the internet. It is in fact a USB stick, which you can physically keep. By storing the hardware wallet in a safe, your INJ tokens are protected against hackers. In that case, you must of course ensure that you do not lose your hardware wallet. Ledger and Trezor are the best known and most used hardware wallets, which we can also recommend to you.

The course of Injective Protocol

The price of INJ tokens fluctuates a lot. As a result, it may be smart to buy INJ tokens at one time, and anything but wise to do so at another time.

That is why it is important to do good research on this project before you decide to invest in it. For example, you could carry out a fundamental analysis, in which you mainly look at the picture surrounding the project.

Another way is by analyzing the prices (rate) carefully. The best way to do this is to keep a close eye on the live price to spot certain patterns. You can do that via the link below, after which you will go to the price of Injective Protocol on CoinMarketcap:

It is obvious to ask how this new decentralized exchange differs from others. And most importantly, why is it a direct competitor to every other exchange, whether centralized or not?

This is because it is a project incubated by Binance Labs and thus with a major player in the DeFi world.

Injective Protocol is much faster and cheaper. After all, the protocol is part of layer 2 of Cosmos and thus does not have to support the congestion of other decentralized exchanges based on Ethereum. In addition, the protocol is intended to be free of gas charges, but only with service charges. The interoperability of Injective protocol allows trading on both Cosmos and Ethereum ecosystems.