Do you believe in the rise of the Internet of Things? There is a crypto project that focuses entirely on this, called Helium. In this article we explain what Helium is, how it works and where to buy the HNT coin!

What is Helium (HNT)?

Primarily focused on Internet of Things (IoT) connected devices, the Helium project is a decentralized network utilizing a blockchain . Through its mainnet, launched in July 2019, the Helium project provides an open source and IoT network that allows wireless and low-power devices to communicate with each other. They can also send data over the network of nodes.

This project is primarily aimed at companies specialized in collecting data from infrastructure sensors. It is also intended for companies that are active in the field of tracing goods and animals and affiliated houses. The introduction of the network has been facilitated by a strong commercialization of hotspots in many homes.

The nodes here represent the combination of a blockchain mining device and a wireless gateway. So these nodes exist as access points. To convince them to act as relays for the company, Helium will reward users who mine the nodes , with tokens of its own cryptocurrency HNT for Helium Network Token. See below a short video explaining Helium in 3 minutes.

Helium was founded in 2013 by Amir Haleem, Sean Carey and Shawn Fanning. Amir Haleem has worked extensively in video game development and in the export industry. Shawn Fanning became famous for developing the music sharing platform Napster. In the 1990s, this platform was considered one of the first peer-to-peer internet services.

Before using his talent only for Helium, Sean Carey was involved in several companies. For example, he worked for the ad optimization company Where, which was later acquired by PayPal. Thus, Helium’s team consists of professionals with experience in manufacturing, blockchain technology, radio and equipment, peer-to-peer, distributed systems, etc.

In July 2020, the company delivered its first hotspots in Europe with a dozen devices in Lyon, Paris or Chambéry. Since its inception in 2013, Helium has been working to identify the shortcomings of current infrastructures to prepare the Ido communications of tomorrow.

How Does Helium Work?

“Mine crypto with radio waves” is the phrase on the Helium project website, and is enough to make any cryptophile wary. Because what do they mean by that?

Mining is something that you continuously encounter in the crypto world. Particularly with regard to the ecological impact of protocols based on Proof of Work (PoW), of which Bitcoin is of course the most striking example.

While the terms Proof of Work and Proof of Stake are now well known in the cryptosphere, the Proof of Coverage protocol used by Helium is much less so. It’s really about adding a node to a network. Installing an additional node on a network allows two things: on the one hand, to extend this network and on the other hand, to contribute to its security. For each network one joins, the person is rewarded with a Helium token. A reward that the user can also receive every time another user uses their network coverage.

Getting a node on the network requires investing in a Helium-compatible machine. A list of these is available on the Helium website. In terms of price, you will have to invest between 300 and 500 euros. These boxes then make it possible to mine HNT, via an extremely low energy protocol. Good to know: The manufacturers of the boxes have regular stock shortages for almost all of them. 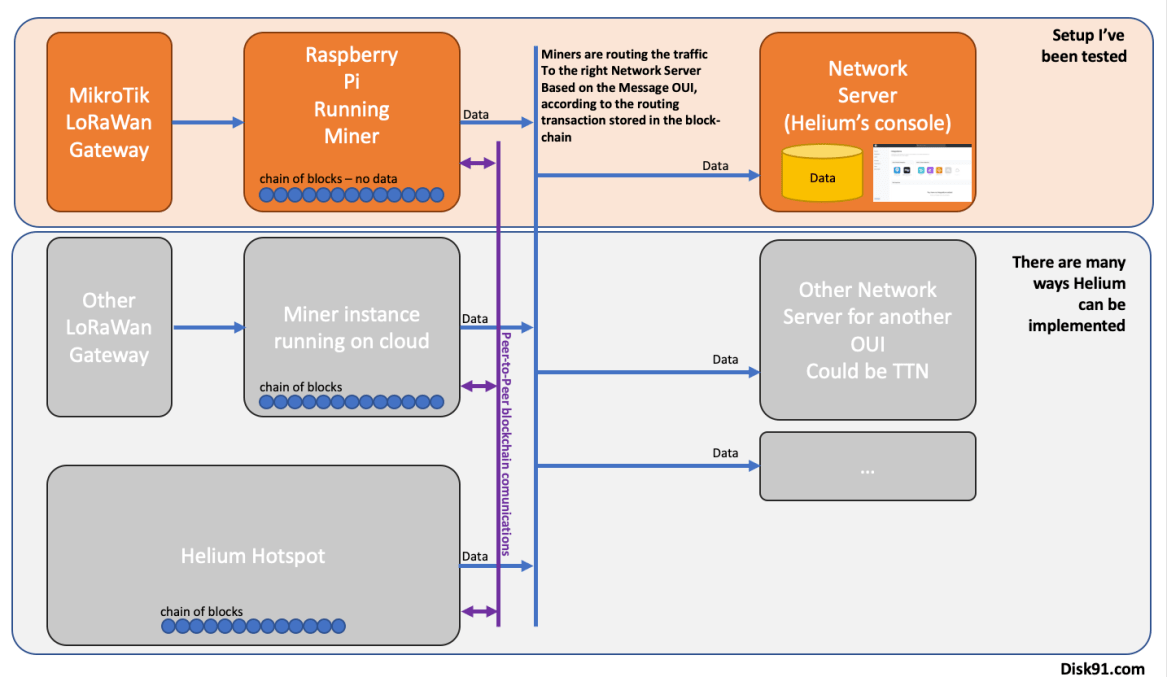 An achievement that depends on your location

This is one of the points to consider if you want to invest in the project and not just invest in the Helium project crypto. After all, whoever places network and nodes on a network necessarily says proximity to these networks. A project that could benefit more those who live in the heart of the cities.

The profitability of building new nodes therefore largely depends on location. Moreover, if the profitability is currently excellent for the miners already present, there is no doubt that it will be lowered in the coming months. The number of miners is indeed low at the moment. The shortage of machines largely explains the very slow evolution of the project.

Can I mine or stake HNT?

Before answering this question, it is worth remembering that cryptocurrencies are based on a decentralized system that is not controlled by banks. Mining is therefore confirming and recording the transactions on a blockchain. This activity requires the use of specific software.

How do you mine the crypto of Helium?

Crypto Helium is one of the cryptocurrencies that can be mined. Unlike other cryptocurrencies, any user can mine Helium. Using the Nebra HNT indoor mining gateway, users build a cover for the people’s network and participate in mining the currency. While HNT runs on the blockchain, each user can deliver hundreds of square kilometers of wireless network coverage. This is about the same process as with other mining gateways.

It is also possible to use the outdoor HNT Mining Gateway, which can be installed on a roof or on the side of buildings. This solution is suitable for long-range applications in settlements, cities and the village.

This makes the wireless network ideal for actions that do not require high power. For example, it can be used to transmit data from sensors using radio waves. The network can cover a city with only 200 gateways. All owners receive HNT in exchange for hosting and giving access to the LongFi network.

To earn tokens, the remote Nebra HNT mining access point must be connected and the wireless coverage of the various points must be validated. Miner hotspots use the system called Proof-of-Cover to earn more crypto helium when they are close to other miners. However, they must maintain a legal distance of 300 meters.

As for the hotspots, their merits are less important because they cannot participate in the Proof-of-Cover system. In addition, they can only transmit via the Internet. Due to the variation in configurations, there is no constant amount of HNT to be earned per day compared to other cryptocurrencies.

How do you stake the crypto of Helium?

Abandoning is a process that allows users to hold and block funds to earn a reward. It is a strategy used by many networks to validate new blocks without using mining software. Validators are primarily chosen based on the number of HNT coins they are willing to wager. The higher the amount of coins wagered, the greater the chance that the user will be chosen as a validator.

Staking requires a direct investment in the HNT cryptocurrency while mining requires an investment in hardware. Today it is possible to stage Helium thanks to the introduction of validators to improve the security of the network.

In order to be able to continue to support new applications, it was important that the network became more efficient.

How can you store HNT coins?

One of the most important things to do when you come into possession of a cryptocurrency is to keep it. Therefore, creating a wallet is necessary, especially to ensure the safety of your Helium coins.

To store your crypto Helium, Trezor is one of the most recommended wallets. It is especially famous for its reliability and quality. It is one of the best cryptocurrency wallets in the world.

Without context, a hardware wallet is one of the best solutions to store your cryptocurrencies. These USB devices provide durable storage space for your important wallet information. It has military grade firmware and security. Ledger Nano is one of the most well-known wallets in this category. It can be used to store Helium crypto.

The Ledger app, installed on a Nano S, allows the user to check their balance, see their Helium address and even submit their transactions. This Helium wallet is also very secure and reliable.

Where can I buy HNT?

At first it was very difficult to get hold of Helium (HNT). This is because in the past it was not for sale on traditional crypto exchanges, such as Binance or Gate.io for example . At the time, the project was still relatively unknown.

Fortunately, that is no longer the case at the moment. It is possible to buy HNT tokens on the crypto exchanges that you probably already use. However, this is not always the best choice to buy HNT for the following reasons.

Many crypto exchanges do not have enough liquidity or are not safe enough, making it risky to use these exchanges. For that reason, we recommend that you buy HNT on, for example, Binance or Gate.io . These are reliable crypto exchanges where you can buy HNT tokens without a doubt. You can do this by paying with iDeal, PayPal or, for example, credit card.

It is of course also possible to buy HNT coins from decentralized exchanges (DEX) such as Uniswap or Sushiswap . You will have to go through many steps for this, so it is actually not recommended for beginners.

The price of Helium (HNT)

To the trader or investor, the Helium Token appears to be driven by a very ambitious project. A project that could eventually take a real place under the sun in the ultra-competitive world of cryptos.

In terms of price, the HNT token has been on a steady rise for almost a year now. Although it was much more measured in the first months. In early August 2020, the price of HNT doubled to reach the $1.50 mark. After peaking in September, the token will go through a period of fluctuating between $1 and $2.

In early February 2021, the HNT token was trading for just over $2 on the exchanges. After an exponential rise, the token even crossed the $20 mark in early April. This increase is due in part to the growing adoption of the decentralized hotspot project, but also to the token’s listing on the Binance exchange platform.

Today (June 2021) an HNT token is trading for about $16.1 on the various crypto exchanges.

Let’s briefly summarize what Helium is and how it works. Helium has been around since 2019. This project is open source and has its own blockchain. The goal of this project is extremely ambitious: to provide general network coverage to all connected devices. In concrete terms, it is about being able to connect to a network, either with a smartphone, a computer or a connected watch. Hotspot networks already offer this alternative, but they are centralized networks. With the Helium device, any user can create a decentralized network and their own Helium hotspot, anywhere.

But not only that, because the Helium project focuses on what is often referred to as the Internet of Things (IoT). An industry and sector that aims to connect devices with each other. If solutions exist with Wi-Fi, 5G or Bluetooth, these technologies will continue to work perfectly. Particularly with regard to the quality of the connection or the energy requirement. It is to this major problem that the Helium solution provides an answer.