If you are a regular reader of our blogs at BitcoinUSD.com, you may have seen a blog about Ampleforth earlier this year. What makes Ampleforth unique is the supply and demand of the AMPL token. They are trying to reduce the volatility of the token. Moreover, they want to provide an independence for money from central banks. Now Ampleforth has gone a step further and has also added the FORTH Governance token to their protocol. A governance or management token has several advantages for the holder of such a token.

Please note: please note that the text below about ‘FORTH Governance token (FORTH)’ as well as the explanation thereof should in no way be construed as advice. The choice for whether and in what way you want to trade (crypto) and which choices you make in terms of investment is up to you and you alone. We are not financial advisors.

Here you can first watch a video showing how the Forth Governance token works.

What is the Forth Governance token?

The Forth Governance token is Ampleforth ‘s governance token . The FORTH token was launched on April 22, 2021. It is a standalone token that you should not confuse with AMPL. Both tokens have completely different uses. The Forth Governance token, as the English name implies, is mainly intended to manage the Ampleforth platform. It is the driving force behind the Ampleforth platform. Ampleforth automatically regulates the stock of the native AMPL token. This then happens depending on the supply and demand for AMPL. So there is clearly a big difference between these two tokens.

If you have the FORTH token, you can vote on proposals to change the Ampleforth protocol. You can also give others a proxy to vote for you. You can think of AMPL as an independent cryptocurrency that functions as a unit of account. FORTH, on the other hand, can be seen as the governance mechanism that oversees its evolution.

Anyone who owned or traded AMPL tokens before March 30, 2021 could claim a share of the FORTH tokens. During the AMPL token’s two-year existence, more than 75,000 people had traded in AMPL. According to their website, 75,734 people could claim FORTH until April 16, 2021.

What is the AMPL Token?

The AMPL token had already appeared on the market in 2018. Because we often talk about it in this blog, a short explanation about this token is in order.

The AMPL token is a stablecoin that is pegged to the US dollar rate. Unlike many other stablecoins , the value of AMPL is not guaranteed by countervalue (e.g. gold) or transactions, but by a unique feed adjustment that the platform uses.

Every day at 2:00 pm UTC (Coordinated Universal Time), the successor to GMT (Greenwich Mean Time), the protocol assesses the exchange rate change between AMPL and USD. If there has been no price fluctuation, nothing else will happen on that day. However, if the AMPL rate is higher than the USD, then new AMPL coins are minted. These are then distributed to all token holders in such a way that after minting you still have the same percentage of AMPL in your possession. The result, however, is that the price has been revised downwards. However, if the AMPL price goes down, an amount of AMPL is burned, so that the price becomes 1:1 again.

As a token holder, you do not lose or win AMPL tokens. You always keep the same percentage of AMPL in your possession.

How does the FORTH governance token work?

The FORTH Governance token works with a series of six sequential steps. With each new step you see an increasing degree of agreement represented by the community. Let’s take a look at these six steps. 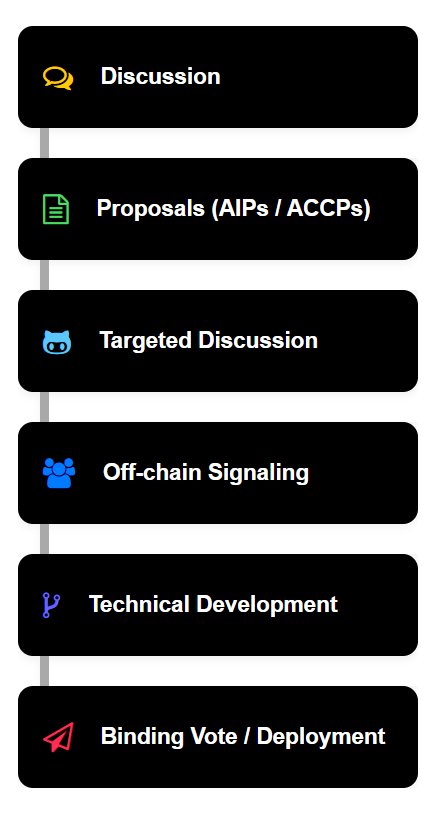 The six steps how the FORTH Governance token works

Who is on the team of FORTH token?

Not surprisingly, the team behind Ampleforth and the AMPL token is the same team behind the FORTH Governance token. The team has been educated at top universities in the United States of America. Including University of California at Berkeley, USC, Yale and UCLA.

The rest of the team consists of a group of people with different specializations. Various people from Pantera, from Facebook and various universities are involved with the advisors. Investments in this project were made by Pantera, Huobi Capital, True Ventures and the Founder Collective, among others.

What is the FORTH Governance token?

Of this, 67% went to the community and 33% to early donors such as the core team, advisors, supporters and the Ampleforth Foundation. After exactly 1 year, perpetual inflation of 2% per year starts. 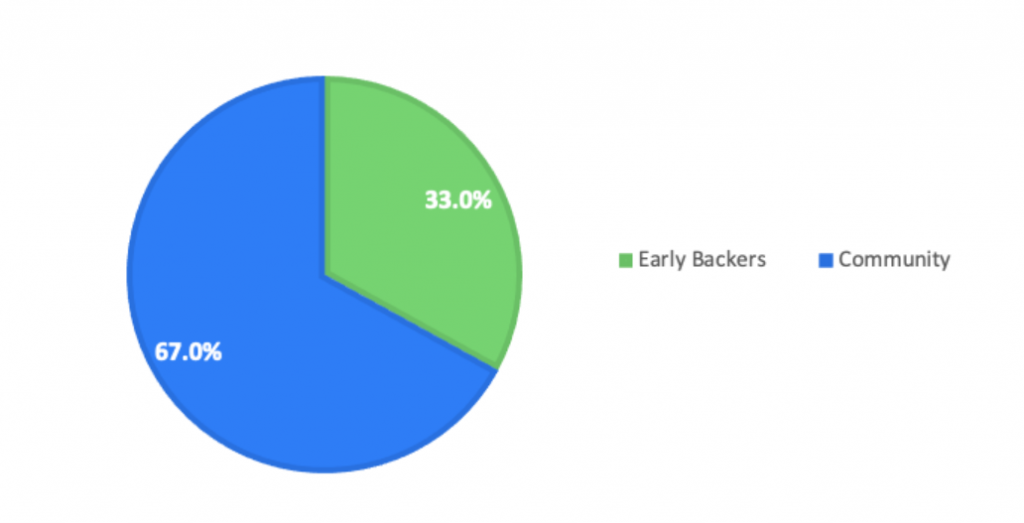 What is the price of the  FORTH token?

If you want to invest in the FORTH Governance token, a good start is to know what the price is. If you are already going to trade, you also want to make a profit. You can make a technical analysis to see what the best buy or sell moment is.

The FORTH Governance token has already reached its preliminary ATH with a price of $57.44 almost immediately, a few hours after its issuance on April 22, 2021. The day started with a price of $28.4. After that, the price fell again quickly and on May 19, 2021, the price went into the red. It is red even as of this writing, early October 2021. The price seems to be dropping further and further and at the time of writing, October 2021, the price is $13.46.

At  CoinMarketCap  , he is outside the top 300 in place 357. With the AMPL token, things don’t look too good at the time of writing. Even if Bitcoin is still going to rise in 2021, it does not look like both tokens seem to be getting a positive boost as a result. I therefore do not think that they will experience a good price development in the short term at the moment. However, that can also change quickly. It is certainly a good idea to keep an eye on these two tokens. If you are interested in one or both tokens. If you want to invest in this coin, it is important to do your own research first.

Where can you buy the FORTH token?

The FORTH Governance token is for sale on Bitvavo  . Bitvavo has included this coin in its offering at the beginning of September 2021. Most leading CEXs also offer this coin, such as  Binance , Gate.io and Huobi Global. There are also many liquidity pools on DEXs such as Uniswap where you can find a FORTH Governance token pair. However, it seems easiest to buy this token on Bitvavo, especially if you live in the Netherlands or Belgium. You just have to click on the widget below to be able to trade this token directly.

What is the best way to store the FORTH token?

You can of course leave your FORTH Governance token on the exchange where you bought the token. However, now you do not have access to your private keys. The private keys of an exchange remain in the hands of the exchange itself. The danger of a hacked exchange is always there and then you have a chance that you will lose your coins. These wallets on an exchange are also called hot wallets .

What is the FORTH token roadmap?

The Ampleforth roadmap started in 2018. Since then, they’ve accomplished a lot, but they’re not done yet! Ampleforth has already released ‘Elastic tokens’, among others. This means that they adjust to the exchange rate differences, as described earlier. The next step is to offer ‘elastic finance’. They are now working on that.

This multichain elastic finance means they want to build a cross-chain highway for values. The Ampleforth Foundation builds these vertically on the stack and horizontally on cross-chain. In the following image you can see better what it means.

The roadmap itself looks like this: The first goal is to release an ‘Elastic AMM’. That certainly sounds interesting! 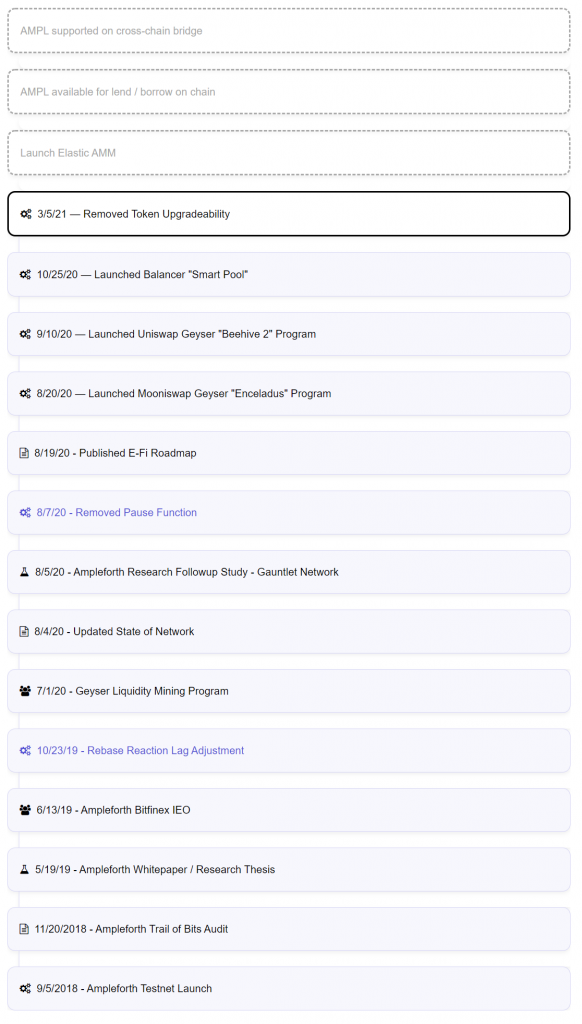 What Ampleforth has done with the introduction of the FORTH Governance token is a good thing for the holders of this token. Of course also for AMPL holders, who could claim the FORTH Governance token in April 2021. Since it is a management token, and not a transaction token, you can expect a quiet price. However, we have already established that unfortunately the price is not going so well at the moment. The outlook for FORTH and AMPL is not positive at the moment. Although this can also change quickly with crypto.

With the release of the Elastic AMM (automated market maker), there may be just the boost the tokens need. So be sure to keep an eye out for both the Forth Governance token and the AMPL token. If you want to invest in one of these tokens, do your own research first.