Gnosis is a prediction market platform built as a decentralized application (dApp) on the Ethereum blockchain. The platform contains both a multi-sig wallet and a Dutch platform. But there’s more to it than just creating a marketplace for market predictions. In this way, Gnosis creates a complete infrastructure layer that you can use to create your own market forecasting application.

Gnosis is a platform built on Ethereum to create prediction markets. In a prediction market, anyone can bet on an event (for example, the outcome of an election). These different bets are put together, creating a consensus on the probability of an event. The advantage of forecasting markets is that they provide a dynamic “collective opinion” that is less distorted than that of a poll, due to the economic stimulus.

In the case of the Gnosis betting markets, users take a position on a particular proposition and receive their reward if their prediction was correct via a smart contract . Gnosis allows not only the placement of binary options (yes/no), but also multiple choice questions or numerical input (‘what will be the result of the Ajax-PSV football match?’ for example). Watch the video below so you know what Gnosis is all about.

The Gnosis architecture (built on the Ethereum blockchain ) is divided into three levels: the core, services and applications.

The team behind Gnosis 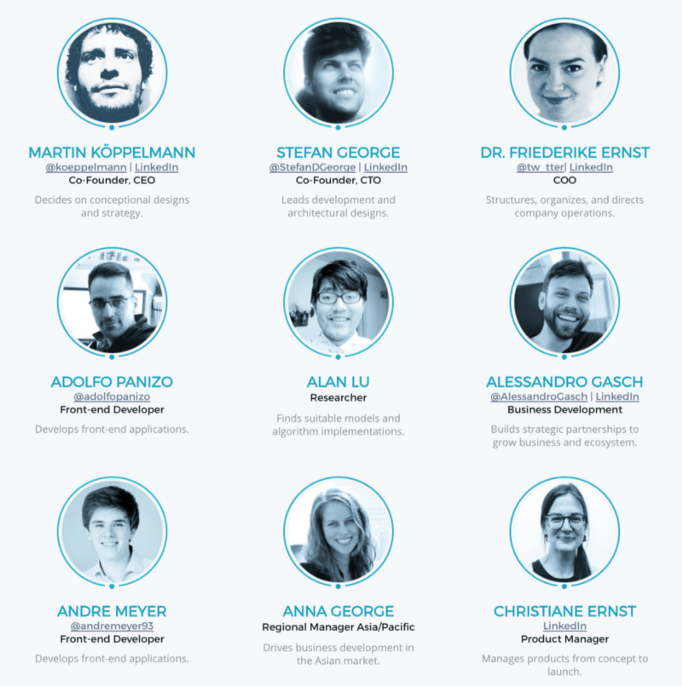 The Gnosis team consists of ten full-time employees, half of whom are developers. Prestigious advisors from the world of decentralized currencies and blockchains, such as Joe Lubin (founder of ConsenSys) or Vitalik Buterin, are also supporting the project.

Gnosis only had its release in 2017, and the developers managed to sell nearly USD 300 million worth of coins within 10 minutes. The tactic behind it was as simple as it was ingenious: a Dutch auction. You know this from Ebay: the seller sets a starting price, then the price drops until someone wants to buy at the given price. The condition is, of course, that the good offered is a “scarce resource”. In this case, Koeppelmann and George had limited the tokens to 9 million. This seemed so lucrative to many cryptocurrency buyers that all tokens were bought up in that short time.

How does Gnosis work?

To describe how Gnosis works, we must first describe what exactly a prediction market is and why it is valuable.

A prediction market uses users’ predictions to bring together information about future events. Users in the market exchange tokens that represent the outcome of a particular event. Since some outcomes are more likely than others, these tokens will ultimately have different values ​​in the open market.

The Gnosis platform is based on Ethereum blockchain. The mainnet comprises three main components:

Core – It performs the basic functions of regulating the issuance of tokens, provides decentralization of digital assets using a distributed computer network, and is also responsible for the convenience and functionality of the platform interface. The core technology allows users to perform fast transactions without charging fees.
Services – This layer is derived from the core and serves as a service with paid tools for setting up the platform and introducing third-party technologies, be it some kind of cryptocurrency or a payment system.
Applications– To make changes to the event interface, a user can use the special section library, where the main planes of the network of smart contracts are concentrated. 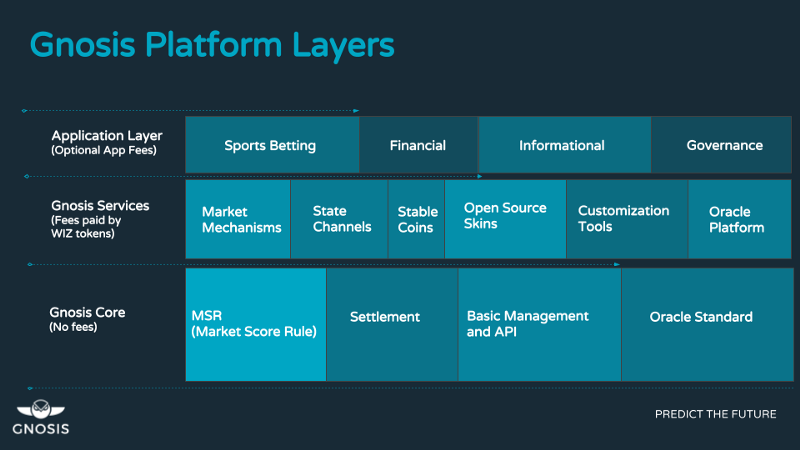 A user registers the following event-driven question on the prediction marketplace: “Where will Amazon locate its new headquarters?”. It contains the answer options, “Chicago, Atlanta, Austin, New York, and others.” It must contain “Other” to ensure that the probability of all answers combined is 100%. Without “Other” it would have been possible that none of the answers were correct.

When the market opens, the “other” tokens are likely to fetch the highest price, as it is more likely that one of the hundreds of other cities will get the contract for the four specific options. However, as the cities are abolished, expected market prices will begin to adjust accordingly.

Let’s say Amazon announces a final roster of four cities — Chicago, Atlanta, Los Angeles, and Boston. The prices of tokens in Austin and New York will drop to zero almost immediately as people want to quickly sell their worthless tokens. When the news finally gets out, most tokens won’t even be able to find a buyer.

Now prices are balanced to reflect the news of the announcement. The price of any “other” tokens should be about double that of the Chicago and Atlanta tokens. However, this may not be the case. The community can believe that, even after the announcement, Chicago has by far the best chance of being elected. Therefore, the Chicago token could have a higher price tag than the “other” tokens, even if it is one city against two.

Finally, Amazon announces that they will be settling in Chicago. The bet is closed and Chicago token holders can claim their reward.

There are two ways to make money in a prediction marketplace. The most obvious way is to correctly predict the outcome of events. Less obvious is that you can trade tokens for profit if market conditions change.

Gnosis Olympia and the admin interface

Olympia is the test version of the Gnosis prediction market application. They run free tournaments with this product so you have a chance to try it out without spending any money. Every few days, the team will give you a certain number of Olympia (OLY) tokens that you can bet on on different prediction markets.

Do you win a bet? Then you earn Gnosis Tokens (GNO). You can sell GNOs on the free market, giving them some value.

The next stage of Gnosis is the management interface. The team released a beta version in December 2017, but has yet to announce a release date for the official major version. The management interface is basically your dashboard for the Gnosis prediction markets. Here, for example, you check your balance, you can participate in various bets and make your own bet.

The Hunch Game is a platform that provides information with celebrity news. While not necessarily related to crypto betting and trading, the developers at Gnosis see this area as an important development for the future. Price Discovery relates to the pricing of a product. This should help auction houses determine a starting price for an auction and predict who will bid for what price.

Financial Markets is a survey platform for asking and answering questions about forecasting, such as the performance of a bond. Insurance deals with the conclusion of insurance policies. Gnosis has developed a program that provides direct access to flight insurance information without the intervention of other expensive services. Futarchy is another forecasting program that shows, for example, the price trend of other cryptocurrencies.

The Value of Forecast Markets

Forecast markets use the wisdom of the crowd. This is a phenomenon where the collective predictions of a group of people are generally more accurate than those of an individual, even if that individual is an expert.

There is no end to making up bets for these types of prediction markets. They are also very useful for collecting information on topics such as climate change, disease outbreaks and price predictions. You immediately see how a group of people thinks about certain things. You can also use them for different governance models to determine which policies will have the most positive effect on the population as a whole.

In addition, they are also very valuable for insurance companies to help cover risks. And that’s not the only financial industry to find that forecasting markets are useful to them. Similarly, there are investors who use forecasting markets to determine the value of assets. Think of stocks, bonds and cryptocurrencies. The value of a prediction market is thus very high, as they can be used for different purposes.

You use OWL tokens to pay the transaction fees on the platform, and 1 OWL always equals 1 USD. Gnosis does not collect fees from tokens, but destroys them and removes them from circulation. You can also pay your fees with another ERC20 token. If you choose this option, Gnosis buys GNO with your fee and destroys GNO.

Ideally, this destruction and deployment mechanism will limit the supply of GNO, increasing its value. On the other hand, Gnosis will tweak the OWL distribution to make sure it’s always at $1.

Gnosis has two types of tokens: Gnosis (GNO) and WIZ. GNOs are the ERC20 tokens that the team sold during their ICO . They created 10 million GNO tokens and are not producing any more. These are the tokens that you can see traded on the open market.

By staking GNO, you will receive WIZ Coins. To do this, you need to lock your GNOs into a smart contract that makes them non-transferable. The amount of WIZ you receive will depend on the length of the lock-in period you have set, and on the total supply of WIZ tokens on the market. The team aims to have a total of 20 times more WIZ than the average monthly WIZ usage over the past 3 months.

What to look for when buying GNO?

If you are considering buying GNO or any other coin, it is important that you do a thorough research and analysis of the coin first. Cryptocurrencies are complicated, volatile and speculative. That also applies to GNO. Therefore, pay attention to the following when you want to buy GNO.

Do you want to buy GNO? This is possible on multiple platforms. Think of Binance and Bittrex, but also DEXs such as Uniswap and Sushiswap . So you can easily access Gnosis’s tokens.

The rapid and, more importantly, massive success of Gnosis makes a few things clear. Not only that forecasting markets in general attract a lot of interest from many investors, but also that this can grow immeasurably in the future as the financial technology (DeFi) sector will show even more opportunities in the future. George and Koeppelmann are creating entirely new conditions for more efficient markets with their programs. As a result, they have acquired an extremely strong position in the market.