For a long time Fetch.AI was still under the radar, and nobody knew about the existence of this project and token. After the huge success on Binance Launchpad, the company has attracted attention in the world of cryptocurrency and blockchain. Many people are interested in the concept and technology behind the fledgling startup. In this article we explain exactly what Fetch.AI is and how it works, so that you ultimately know whether you should invest in it!

What is the Fetch.AI?

There is an increasing demand for technology and its use in our daily lives is also increasing. As well as the development of many aspects of it, such as artificial intelligence and blockchain . Numerous projects are trying to establish themselves in this world of technical innovation and fierce competition.

Among the projects that aim to integrate blockchain technology with artificial intelligence is the crypto project Fetch.AI. The Fetch.AI project was launched on Binance ‘s Launchpad in February 2019.

The project originated as a fusion of two technologies that are often mentioned together. This is namely artificial intelligence (which is abbreviated with the English letters AI) and blockchain.

The idea arose from the desire to decentralize systems based on artificial intelligence, which are increasingly adopted in the form of digital assistants. Think of Google’s smart assistant.

The Fetch.AI team believes in the vision to offer various support services, without the need to provide free user-centric data to more and more information-hungry companies looking to monopolize the process. A good example of this are Facebook and Google.

The story of the project and British startup Fetch begins in early 2017 after Itzme AI and uVue decided to join forces under one roof. The project was picked up by the Binance IPO, which helped stage the sale of the digital currency in its initial form, with the company raising $6 million in about 10 seconds.

The Fetch.AI . team and partners

Fetch.Ai was founded in early 2017 after the merger of two independent companies, Itzme AI and uVue. The team consists of an interesting selection of experienced business people, developers, scientists and crypto investors. Among them are graduates of the universities of Oxford, Amsterdam, Birmingham, Miami, UCL and King’s College London. They have gained experience with former employers such as the Swiss National Bank, the BBC, Sony, Citrix, Hitachi or Google. This says a lot about the team’s experience and qualifications.

Humayun Sheikh (CEO and one of the co-founders of the company) is an innovation entrepreneur and co-investor of DeepMind. That is a company that develops artificial intelligence and was later sold to Google for about 700 million dollars. The CTO and co-founder Toby Simpson previously worked as a developer at DeepMind and is a producer of a successful game series. This developer has 30 years of experience in the software sector, of which 10 years as CTO. The company’s third co-founder and CSO is Thomas Hain. He is a professor at Sheffield and a recognized scientist in advanced machine learning and artificial intelligence.

Fetch.Ai is currently a member of MOBI (Mobility Open Blockchain Initiative). This is a partnership working to develop blockchain-based vehicle data/mobility services. Major companies such as BMW, Ford, Bosch, General Motors, IBM, BigchainDB, Hyperledger and IOTA have joined the initiative.

As part of the collaboration at MOBI, Fetch.AI will be involved in the following projects:

How does Fetch.AI work?

The company aims to create a hybrid system of blockchain and AI technologies. It aims to be the world’s first self-adaptive and self-regulated decentralized blockchain that can manage transactions itself. Their solution consists structurally of the following three different elements.

The AEAs are the users of the network. They send, receive and use the digital data in the network. Basically they will act as fully empowered AI agents of individuals, companies, organizations and even devices. An AEA collects data and then sells it to those who need it. These interactions will be fully automated. As is common with AI, AEAs learn more and more over time and get better and more efficient. Fetch.Ai believes that their AEAs can work in all sectors and will significantly change these sectors.

The behavior of each AEA is governed by the Open Economic Framework (OEF). This is a combination of APIs, lists of services, past transactions, portfolio positions, and other relevant factors. It is designed to provide AEAs with a semantic, geographic and economic overview. The OEF stores relevant information and uses artificial intelligence to optimize the use of this information for the AEAs. The framework is self-adaptive and relies on specific trusted nodes being rewarded with tokens for providing their services.

Fetch.Ai’s technology is a combination of the traditional blockchain architecture and the Direct Acrylic Graph (DAG) technology introduced by the IOTA project. Many compare it to Zilliqa on the basis that it will also support sharding. But unlike traditional sharding, Fetch.Ai’s smart ledgers have so-called resource traces. This means that a transaction can be assigned to several jobs at the same time. The system is fragmented in a manner similar to “chain forking”, where new jobs can be created to relieve the pressure on a crowded transaction file.

The blockchain can form a transaction block by referencing the previous block hashes in the groups defined in the transaction resources. Overall, it is a complicated system with the goal of delivering unprecedented scalability, stability, useful economic work, and high-quality information. The project uses the UPOW (Useful Proof of Work ) consensus mechanism. It combines PoW, PoS and DAG together. The DAG system considers a transaction valid once it has been confirmed by two nodes. That way, the computer resources remain free to train the AI. In addition, low-power nodes can earn rewards by validating low-value transactions.

Binance believes in the success of Fetch.Ai

Binance Launchpad is Binance’s exclusive token launch pad for digital assets. This major exchange has set up its Launchpad to support blockchain projects. In doing so, they not only help them raise funds, but also provide them with access to an extensive network, a large number of mentors and business advice to help them grow.

Following the success of the BitTorrent token sale in January 2019, Fetch.Ai was the second coin offering project of the year to be launched on the Binance Launchpad. More than 69 million FET (Fetch’s native token) were on sale during the public offering on February 25, 2019. All of them sold out within 10 seconds. The company managed to generate an additional $6 million in investment capital through the ICO . 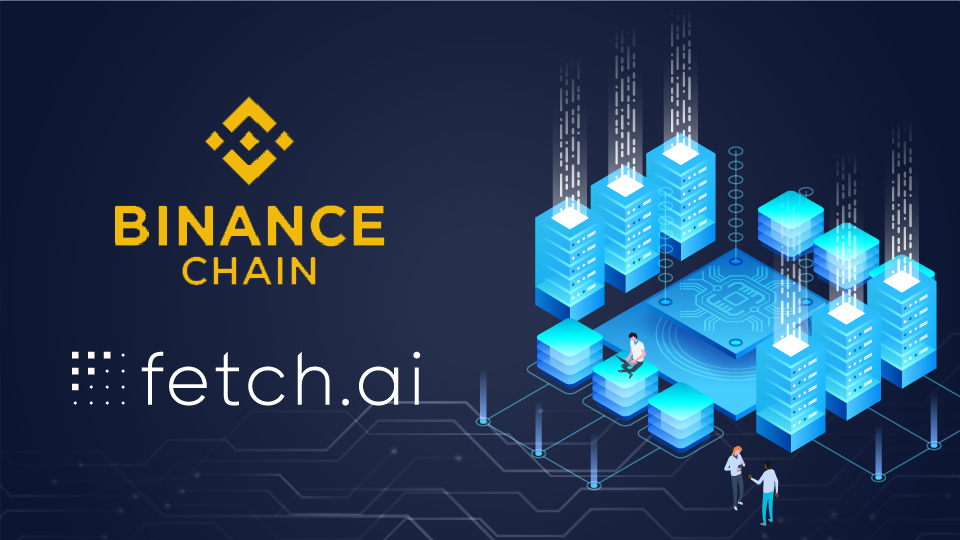 What solutions does Fetch.AI offer?

Fetch.AI is presented as the foundation of future decentralized digital data platforms. Based on this concept, most of the tasks of AI users will actually be performed by so-called independent software agents supported by AI technology.

In addition, these agents are intended to simplify the use of user-generated data. Fetch.AI aims to replace centralized systems responsible for tasks ranging from data transfer to providing day-to-day services, such as booking hotel rooms.

Fetch’s developers argue that an open, decentralized system like theirs is better positioned to collaborate in the emerging machine learning economy.

In the Fetch project, software agents function as digital entities capable of performing independent transactions and representing themselves, their devices, services or individual users. These digital agents will use AI to participate in decision-making processes for themselves and on behalf of the users of Fetch.AI. Even when they themselves have not been exposed to various challenges before.

These users will be found from individuals, companies and government agencies, while the range of tasks the agents can perform is virtually unlimited. From checking the availability of airline tickets to developing models for forecasting the weather.

The project’s Open Economic Framework is expected to product the data generated by Internet of Thing (IoT) devices based on the fact that their agents will be present in each of these devices. For example, a delivery person can find out weather conditions by calling a vehicle’s windshield wiper, and then transmit that information to his company’s digital system to facilitate the provision of appropriate services related to that information.

As a result, independent Fetch agents become valuable to those who need their data, without necessarily being aware of it.

As agents become representatives of diverse data, devices, and services, they become useful tools for a group of data analysts and market experts seeking to improve the delivery of diverse services.

Fetch.AI and FET reduce the need for human or organizational intermediaries to control access to the knowledge center. Using machine learning that connects the blockchain with agents in the field, data previously considered economically worthless can now become the foundation of emerging industries.

How does Fetch.AI hope to achieve greater scalability?

The blockchain of the Fetch project (Ethereum) has been scaled up to theoretically support millions of transactions per second and is capable of restructuring to connect OEF with Fetch agents.

Scalability is achieved by combining transaction chains with some features of a non-periodic focused chart (DAG). In some blockchain-based solutions, Fetch supports the simultaneous assignment of a transaction to many different resource corridors. The corridors are then optimized for use using the pre-assessment module that determines which corridor belongs to a particular transaction.

Finally, the transactions are aggregated by hashing the resource ID, with system capacity proportional to the number of lanes available.

What is the Beneficial Proof of Work (UPOW) mechanism?

The consensus algorithm used by Fetch.AI is called Proof of Beneficial Work (UPoW). This mechanism creates new blocks in a manner similar to standard PoS protocols, while generating the order of transactions based on the work done between the two blocks.

Specific math problems are sorted by difficulty and grouped into Proof of Work packs, allowing even less powerful nodes to earn rewards.

Where can I buy FET?

Fetch.AI is extremely popular, and so is the FET token. You can currently buy FET on all major crypto exchanges. Think of Binance, ByBit or Bitcoin Meester. But you can also buy FET on decentralized exchanges (DEX) such as Uniswap and Sushiswap . However, it is a lot more difficult to buy FET via a DEX.

Because Fetch.AI runs on the Ethereum blockchain, and FET is an ERC-20 token, the token can be stored in almost any wallet. So it doesn’t matter where you store the token. However, it is recommended that you store large amounts of FET in a cold wallet, as this is a lot safer than a hot wallet. You can easily disconnect a hardware wallet from the internet, making it impossible for hackers to get to the tokens.