Years ago, most people thought that Bitcoin’s blockchain would work really well. It has since become apparent that the blockchain is encountering various problems. The same has happened with Ethereum. There are therefore many companies that are launching their own blockchain, and hope to solve the problems of other blockchains. The same goes for Fantom. In this article we explain what Fantom is and how it works!

Fantom Foundation is a company building a platform that includes fast, scalable and distributed DAG-based registers that use aBFT principles to achieve consensus in this way. They are also making a new compiler that can authenticate a virtual machine to run the smart contract.

Fantom’s project thus makes it possible to use smart contracts within DAG-based systems. It does this with the Lachesis protocol. The nodes do not need to know anything about the existence of the other nodes in the network. They can just do their own work. This contributes to the high scalability of the network.

Fantom’s mission is to ensure better compatibility between all transaction systems. It does this with DAG technology and a new, highly reliable infrastructure, which enables transactions and data exchange in real time. The project also aims to develop a new verifiable compiler and virtual machine to automatically verify whether a node is reliable enough to create and manage smart contracts.

Fantom considers Hashgraph, IOTA , NANO and Ethereum as its main competitors. This is mainly because these blockchains and projects are also engaged in offering solutions that involve smart contracts.

The team behind Fantom

How does Fantom work?

There are three blockchains in the Fantom architecture:

The NS blockchain stores the network’s node identifiers. OPERA is a directed cyclic diagram made up of event blocks. Blockchain MC is the main chain, where event blocks are stored and replenished by the network. 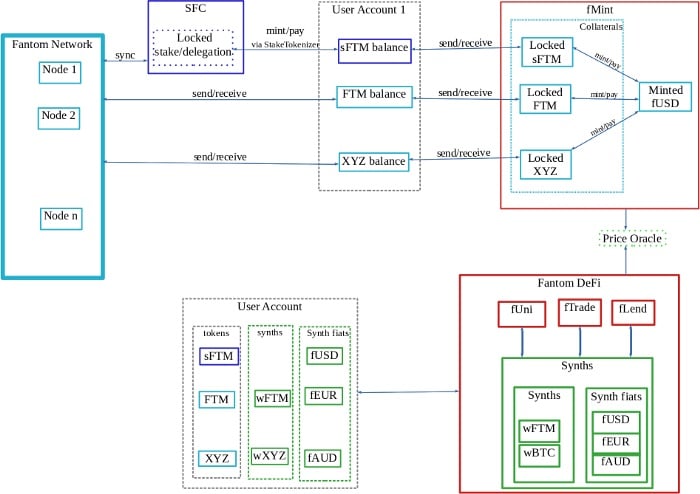 Fantom plans to implement Proof of Stake (PoS) for network security. It will allow anyone to become a member by pressing a confirmation button or authorizing.

Nodes that join to reach consensus are known as validators. A user can run a node by placing a minimum of 15 native FTM tokens. The user can also authorize the node to validate any amount of FTM. The account that the validator runs will then receive a fixed fee on all rewards generated by the node’s tokens.

The reward for validators consists of two parts:

The reward of the node that validates the transaction is also influenced by the importance of the nodes. This score affects the rewards the validators earn. The validator earns a reward not only based on the blocks, but also based on a number of other factors, including:

The Fantom network consists of nodes that are distinguished into users and validators. The ONLAY framework introduces the different classes on the DAG to form a trusted network that is allowed to validate and add blocks to the blockchain.

The ONLAY framework uses the specified classes to reach consensus on the final order of blocks and transactions on blockchain systems. Each node manages its own DAG and calculates the financial blocks. The pBFT payment consensus protocol is optimized with DAG-based finiteness. This is defined on valid transactions and the fairness of nodes. Once a block is completed in ONLAY, it will be finalized by adding the block number. In this way a chain of blocks is created, as happens with any blockchain.

Fantom has its own cryptocurrency called the FTM coin. At the time of writing (April 2021) 2.5 billion of this currency are in circulation. The maximum supply is at 3.2 billion, which means that 80% of the total supply of coins is already in circulation. These coins are available in both ERC-20 and BEP2 form.

The distribution of the fund

The team behind Fantom has divided their funds in the following way:

Function of the FTM token

Where can I buy FTM?

There are several ways to buy FTM. You can do this at a major central exchange such as Binance and Bitvavo . We also recommend that, because you always experience the benefits of high liquidity here. So you can buy and sell FTM at any time. In addition, these exchanges are also a lot safer than smaller exchanges for DEXs.

It is also possible to buy FTM on a decentralized exchange (DEX). This can be Uniswap , Sushsiswap or Pancakeswap . It is a lot more difficult to buy FTM here, because you will have to go through many more steps. That is why there is a much greater chance that something will go wrong when purchasing from FTM.

How can I save FTM?

The safest way to store FTM is to use a hardware wallet . These are electronic wallets in the form of USB sticks. The two best known are the Ledger Nano X and the Trezor. These are also the safest, and for sale for the best price.

The Fantom Wallet is the native wallet for the Fantom Opera mainnet and allows users to stake, store and transfer their FTM tokens. This is achieved by giving users ownership and control of their private keys.

In addition, the Fantom Wallet features a fully decentralized automated market maker (AMM) exchange. This is where users can exchange Fantom-based digital assets, including cryptocurrencies, synthetic assets, and other tokenized commodities.

The Fantom Wallet also allows FTM token holders to vote on update proposals through the app. Users simply go to the ‘Polls’ tab, where they can see all current proposals or parameter updates. Here they can choose to vote for their desired outcome.

In summary, Fantom Foundation offers a wide range of different applications. Moreover, these can be used by individuals, developers and companies. The unique aBFT consensus mechanism used by the Fantom Opera Chain offers a very fast transaction time. The transaction costs are also very low, making it very attractive to use the network.

The Fantom token (FTM) started 2021 at a price of $0.01 and has since risen to a new all-time high of $0.84. At the time of writing, many would agree that the FTM token remains bullish in terms of technical analysis , with a price tag of USD 0.47. With ongoing global partnership announcements, such as The Afghanistan National Standard Authority partnering with Fantom to secure diploma certificates, Fantom Foundation also appears strong from a fundamentals perspective.

Fantom offers various blockchain services that can be seamlessly integrated with current IT infrastructures. We are therefore very curious about what the future will bring for Fantom!