The world of DeFi is no longer as unknown as it was a few months ago. Young investors are also finding their way to various DeFi platforms. However, there are important risks that inexperienced traders are insufficiently aware of. One of these pitfalls is the lack of liquidity, which can lead to an impermanent loss. DODO is also the first decentralized exchange to guarantee more stable liquidity in the world of DeFi.

DODO is a Chinese decentralized exchange (DEX) that provides on-chain liquidity. The smart contracts are ERC20 and BEP20 tokens located on the network of Ethereum and Binance Smart Chain (BSC). Trading on a decentralized finance platform works on the basis of an automated market maker, better known as an AMM. An SMP works like a decentralized exchange that relies on algorithm and liquidity to price a particular asset. Whales or large investors naturally have too high a share of the liquidity, allowing them to influence the price and make it rise out of self-interest, leaving other investors with an unforeseen loss. Letting this rise in a controlled manner and then sell it with a profit is also known as a pump and dump scenario.

Unlike other DiFi protocols, DODO works through a unique Proactive Market Marker (PMM). It is the first DEX to use this new algorithm.

The PMM mechanism is an algorithm that will mimic human trading. This is based on the average trading behavior of an average investor. In addition, it uses oracles to collect data on accurate pricing of certain assets. An oracle is an external party that can retrieve information such as price information or detailed transaction data by means of smart contract. See below the formula used.

The use of an oracle enables the mechanism to counteract whale activity. There are several ways to analyze the value of a digital asset. They look at whether or not a particular coin is overpriced and whether the current price is a realistic price for the coin. This is determined by looking at the total supply in the market and the price per token. See below the formula used.

DODO’s platform operates on SmartTrade, which is a decentralized service that uses different liquidity sources and then compares them to determine the optimal prices between assets. As a result, you always have a balanced pricing of your liquidity pools. DODO’s protocol is built on Ethereum and the Binance Smart Chain and allows trading between arbitrary tokens on the same network. The SmartTrade feature intelligently examines the best order routing from the aggregated liquidity sources. This way they can offer the traders the best prices and they have some certainty.

Crowdpooling is a combination of crowdfunding on the one hand and liquidity pool on the other.

In this DEX, new projects can start launching their tokens by participating in this crowdpooling. New projects can also create their own token in the platform. In the world of DeFi , the law of the fittest often still prevails and therefore the person with the most capital. Creating a campaign can help developers provide a highly liquid trading platform where distribution is done in an even manner without the possibility of front running or the intervention of computerized bots that can influence the price.

A current SMP works on the basis of a bonding curve. The price of an asset rises along this particular price curve as the token bid increases. However, what always happens is that the front runners can purchase these tokens at a much lower price. This leads to large price differences between participants.

Crowdpooling is a way to give everyone an equal opportunity to make their tokens available to a pool in order to contribute to liquidity. In addition, DODO provides a liquidity protection period as additional security. For example, investors can participate in liquidity campaigns and thus support projects where they want to contribute.

Joining a crowd pool is easy. You determine the share of tokens that you want to make available to the protocol. Part of this is used as crowdfunding for the team. The remaining tokens are used to provide liquidity. Participation is flexible in nature, so you can decide for yourself how much you make available and for what period.

After this crowd pool has ended, new liquidity pools are automatically created with the raised capital and the corresponding tokens. The liquidity created by the creator of the campaign, i.e. the investor who currently has their assets available in the pool, cannot be claimed during this protection period. This is to regulate the price and minimize impermanent loss.

Impermanent loss, or accessible loss, is a loss that occurs when liquidity is provided. This is done on the basis of a trading pair of two different digital assets based on a proper ratio so that they both have the same value. When one coin is very volatile relative to the other, its value plummets, resulting in an impermanent loss.

Crowdpooling is seen as a new trend because it does not require manually launching the token supply to provide temporary liquidity. It is much more than just crowdfunding and raising money. The immediate end result after this period is a stable trading pair with sufficient liquidity. This forms a solid foundation for further influx of liquidity and distribution of the exchange.

Just like with any DEX you can also start mining your tokens here . By making your tokens available to the exchange, you will receive DODO tokens in return. Recently, the decentralized exchange also has a vDODO membership. Here you can stake DODO tokens, where you get a vToken. These vTokens represent the current value of your bet. Currently, as a vDODO Member you get an APY of no less than 127.75%. These vTokens can also be minted at a value of 1 vDODO = 100 DODO.

In DeFi we see that almost every token has a governance function to keep the platform as decentralized as possible. Keeping DODO tokens can therefore vote on the future of this DEX and further developments. One token equals one vote. The more tokens you have, the more say you logically have in the future of DODO.

The same principle applies to vDODO tokens. These tokens serve as a proof of membership in the loyalty program and also give it a series of benefits such as voting where 1vDODO is equal to 100 votes.

The governance function that consists of three decentralized autonomous organizations (DAOs): administration, risk management and revenue model. Each of them works in harmony with each other to maintain the exchange. 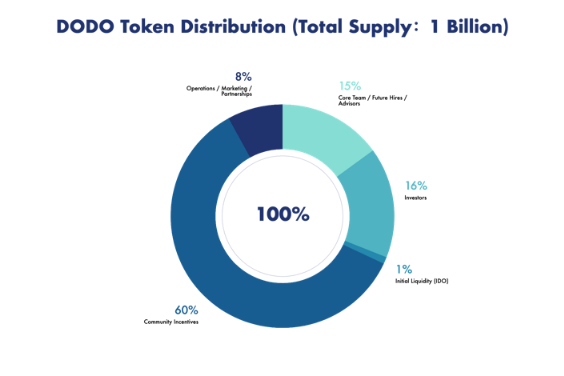 DODO has a total supply of 1 billion tokens with 115 million in circulation at the time of writing. The stock was distributed as follows:

By making the majority available to the community, the decentralized exchange remains healthy through the use of the community members. This is typical of DeFi and is no different with DODO.

With the upgrade of the platform to V2, there will be three major categories. The traders who come to swap their crypto on the platform. The creators of the liquidity pool are those who make their assets available to provide liquidity. And the liquidity providers who are rewarded with LP tokens. The upgrade to V2 comes mainly to open up the decentralized exchange to the general public and also to make the platform operational for everyone.

DODO envisions clear cost efficiency to drive the continued growth of the DODO platform and the DODO community. The value of this token will therefore be the engine of further development of the ecosystem.

As much as 60% of the total token supply remains in the hands of the community. They say that they want to grow further and that it is impossible to plan all programs in advance. As the platform continues to grow and develop, valuation will also become more complex. This is also one of the reasons why they upgraded to V2 to get more suggestion and feedback from the community to grow effectively.

At the time of writing, there is a total locked value (TLV) of almost 205 million and a trading volume of 156 million. These are both distributed across the Ethereum mainnet and the Binance Smart Chain mainnet.

We now know that Binance is also doing its utmost to integrate the DeFi ecosystem into Binance’s current environment, which is central. Cz, the founder of Binance, therefore speaks of CeDeFi: Centralized Decentralized Finance.

The DODO tokens were the 17th project launched on the Binance Launchpool. You can stake tokens in different pools for a certain time, whereby you receive DODO tokens as a reward after this period.

This launch took place in February 2021 over a period of 14 days. Afterwards, Binance made several trading pairs available for trading on their platform: 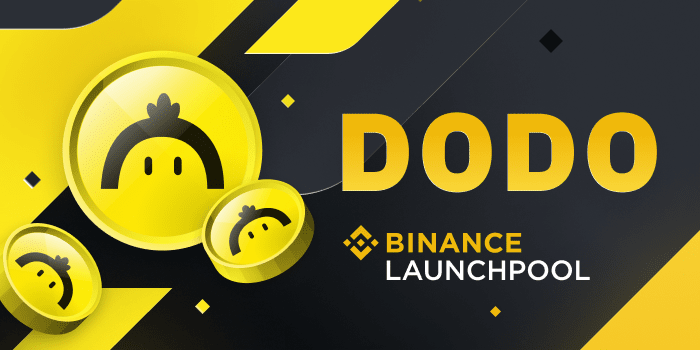 The price is no longer dependent on the available liquidity. Traders can start trading as they do on a central exchange where the price does not depend on liquidity. DODO sees itself as one of the most competitive liquidity providers due to their low transaction costs and their price stability due to its PMM algorithm.

The PMM collects funds that correspond to current market prices in order to create sufficient liquidity. DODO will automatically adjust the market prices when they deviate from these prices to attract arbitrage that will help keep the value stable. This ensures more favorable pricing, a lesser price shift and, above all, a reduced risk of impermanent loss.

A decentralized network is more likely to be resistant to hacks because of its decentralized nature and the governance function that is in the hands of the community. DODO’s smart contracts were audited in July 2020 by Peckshield, a blockchain security firm. The report did not include any critical matters or high-risk findings.

It is important to report that when a protocol has integrated smart contracts, it is always possible that a bug may arise in one of these smart contracts. It is therefore always essential for developers to be meticulous when designing these smart contracts. Unfortunately, we have recently seen that, regardless of the verdict of the audit, DODO Dex was attacked with several liquidity pools drained. This was made possible by a bug in one of the smart contracts. Flash loans were made, as it were, by means of fake tokens, which were then exchanged for the real tokens. The decentralized exchange lost a total of 3.2 million euros.

According to DODO, they managed to recover 1.89 million of these. This is an example that even decentralized finance, which is run by the community, is not a safe haven for a secure, risk-free network. The price remained fairly unscathed during this attack, which immediately proves the usefulness of PMM.

DODO is an innovator in the DeFi ecosystem because it addresses the pain points and responds to them through custom algorithms. What holds many investors back in the world of decentralized finance is ignorance about the risks of permanent loss, among other things. By adapting from AMM to PMM, DODO innovates the world of DeFi. Although the project is still relatively young, DODO has announced that since April 2021 the project is also active on the Huobi Eco Chain (HECO). Is this the revolution DeFi needs to grow? We will see in the future how DODO manifests itself and grows further in the ecosystem of decentralized finance!