Firms such as Bol.com, Upwork, Fiverr or eBay have a large national or international user base. As a user, however, you have hardly any influence over the direction or structure of these platforms. You have no say in the costs or commissions you have to pay, the UI/UX (user interface/user experience design) or the usage guidelines. The moment these firms cease to exist, all data associated with them will also be lost. Your user data, your reputation or creditworthiness, your complete identity that you have built up, possibly even over a longer period of time, will also be lost. District0x tries to solve this problem with online districts (or neighborhoods) operating as a DAO (decentralized autonomous organization). These districts are then always accessible and the data never disappears

It should come as no surprise that we are going to be talking about District0x and the DNT token in this blog. I’m going to explain to you exactly what District0x is and how it works. We’re also going to take a behind-the-scenes look at this project ‘s team and take a closer look at the DNT rate. I will also tell you where to buy the DNT token.

Please note: please note that the text below about ‘District0x (DNT)’ as well as the explanation thereof should in no way be construed as advice. The choice for whether and in what way you want to trade (crypto) and which choices you make in terms of investment is up to you and you alone. We are not financial advisors.

Here you can first watch a video showing how district0x works.

District0x is a network of decentralized marketplaces and communities that operate as a DAO (decentralized autonomous organization). These are then called ‘districts’ or neighborhoods and it is built on the Ethereum blockchain. Before DEXs such as UniSwap became  popular, district0x was already working to solve existing problems of DEXs. Think of providing tools to better coordinate management and compensation.

They want to build a new model from scratch. They do this with the core functionalities that are required and with which less technically gifted users can also get started. It is now also an option for them to set up their own organization, to obtain or grant voting rights and to enable new ways of coordinating this themselves. In this way you can, for example, post lists of information, build in a filter or search function, make payments or build a reputation. You do this with d0xINFRA, this is a framework of smart contracts on Ethereum and various modules that help developers set up a marketplace on district0x.

The technology behind district0x is fully tailored and built for the community. In other words, an everyday user, like you and me, with no business interests. District0x provides all the necessary functionalities to set up a functioning independent economy of and for service providers. Providers and users of these services can then manage their platform in their own free way. All intermediaries who want to take a piece of the cake are completely eliminated, because they are simply not necessary.

As users, you can then set your own rules, interact directly with each other and retain full control over your privacy and data. The traditional business setup is actually being turned upside down and changed.

How does District0x work?

District0x works with districts, which you can set up with the District Creation Platform or d0xINFRA .

What is a district?

A district is a decentralized marketplace on the district0x network.You can basically rebuild any existing marketplace as a district on district0x. Each district then has a few core functionalities.

Each district is built on a standard open source framework with front-end libraries. Such a library gives you, for example, database access, template frameworks or session management.

You can set up districts however you want, so each district can be completely unique. You set up the districts with d0xINFRA. This platform does not affect the visual function of a district. The visual design is left entirely to the person who sets up the district or to the community that manages or uses the district. You can expand districts and they are ‘open’. You can then use auxiliary modules for this, which you can see as a kind of ‘plug-in’. They enhance functionality and you can create unique features with them.

What is important in the design of the districts is that each district is administered by a kind of government layer. The aforementioned DAOs. However, to get voting rights, you need the DNT token.We will come back to this later, but this token plays an important role within the district0x platform.

The image below also gives a brief explanation of what districts are.

D0xINFRA is the ‘District Creation Platform’. It allows you to design and set up your own district with an easy to use UI (user interface). On this platform you can also adjust and set the parameters of the smart contracts. You have a choice of customizable UI options allowing you to set up a wide variety of marketplaces and communities with it. There is also a help module, similar to the Google or Apple app store. With this you can easily find plug-ins that increase the functionality and usability of the districts.

DoxINFRA is designed as an open and extensible modular system. It is open source, so anyone can view, modify or improve it. 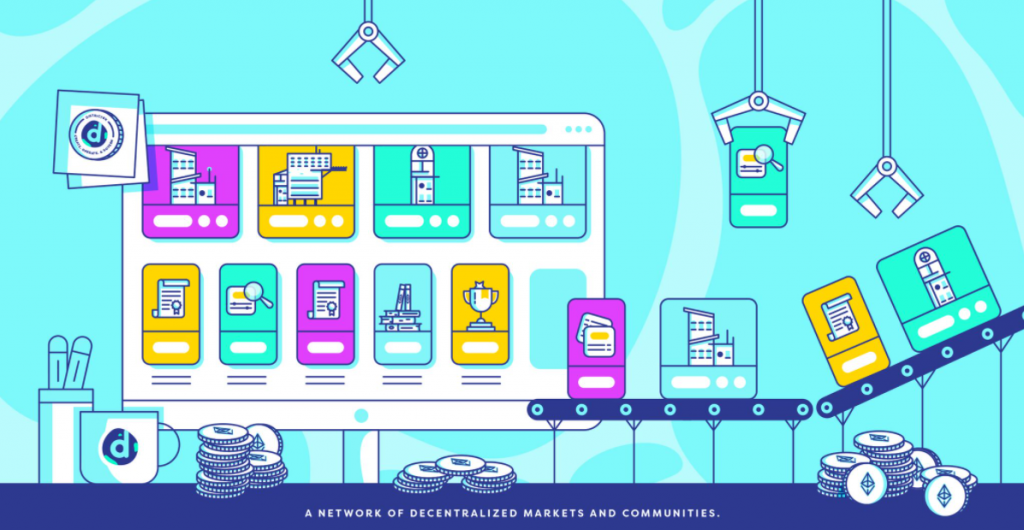 What is the District Registry?

The district registry is where all districts are registered and listed. Each district in the register is determined by a Community voting mechanism. To set up a district you must first deposit DNT along with links, logos, descriptions and a description of how the voting rights work in case you want to strike DNT.

After this, the district is registered and given a government layer via Aragon (open source software to build DAOs on Ethereum). If you then own and stake DNT, you get a say in the management of the district. The more you stake, the more voting rights you get.

What is important to know is that any district that has been set up can also be challenged by district0x users. When this happens, all DNT holders can vote to keep or abolish a district. Should the district lose the vote, the challengers and voters will receive DNT as a reward.

The following video also gives a good and short explanation about the district registry.

Which districts are already live?

At the time of writing, at the end of September 2021, three districts are already functioning live on the district0x platform.

The team behind district0x is led by two people, Joe Urgo and Matus Lestan. They have started a job marketplace called Ethlance, which is now one of three active districts on the platform.

The white paper mentions six other people, with diverse backgrounds and roles.

What is the DNT token?

The DNT token is an ERC20 token that plays an important role in the management of a district. In order to vote and manage district0x, you must stake DNT.

Below you can see the distribution of the tokens. However, it does not mean that the team gets 40%. This 40% is largely reinvested in the project. 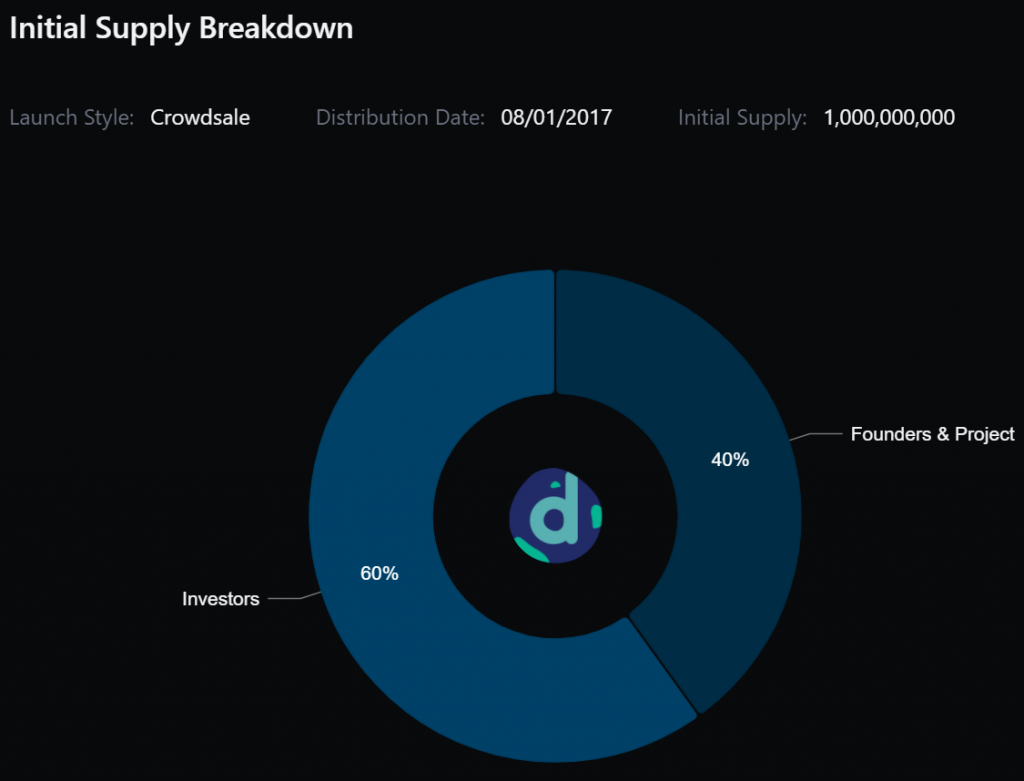 Below you can see the spending schedule of the tokens, which gives a little more clarity about who gets what and when. The token will be released over several years and will last until 2026. 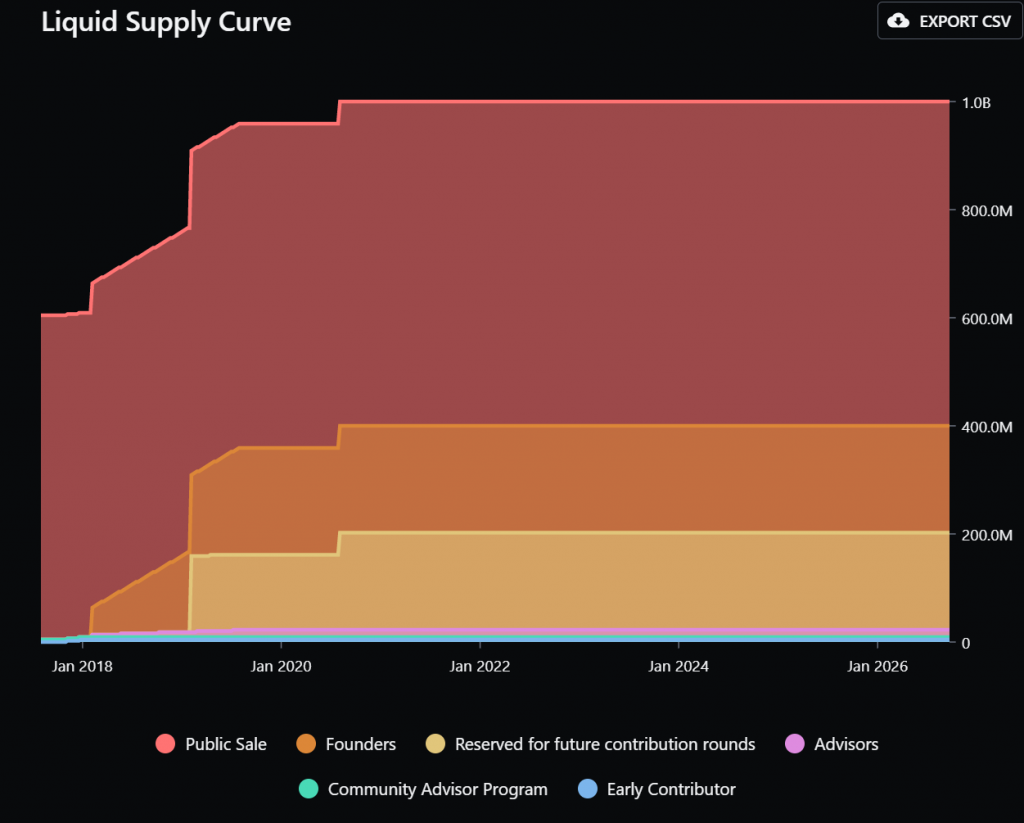 What is the price of the DNT token?

If you want to invest in the DNT token, a good start is to know what the price is. If you are already going to trade, you also want to make a profit. You can make a technical analysis to see what the best buy or sell moment is.

At  CoinMarketCap  , it is just inside the top 400 in place 387. This coin has a good prospect in my opinion, especially if Bitcoin continues to rise in 2021. If you want to invest in this coin, it is important to do your own research.

Where can you buy the DNT token?

The DNT token has been on sale on Bitvavo since August  . Bitvavo has included this coin in its offer at the end of August 2021. Most CEXs also offer this coin, such   as Binance  and Gate.io. There is also a liquidity pool on the  SushiSwap  DEX where you can find a DNT pair. However, if you live in the Netherlands or Belgium, Bitvavo is the easiest place to buy DNT. You can click on the widget below to buy the DNT token directly on Bitvavo.

What is the best way to store the DNT token?

You can of course leave your DNT token on the exchange where you bought the token. However, now you do not have access to your private keys. The private keys of an exchange remain in the hands of the exchange itself. The danger of a hacked exchange is always there and then you have a chance that you will lose your coins. These wallets on an exchange are also called hot wallets .

What is the district0x roadmap?

The district0x roadmap also determines the issuance schedule of two more sales rounds for the DNT token. Below you can see what needs to be done to start rounds 2 and 3 and what will come after round 3. No dates have been set for this. 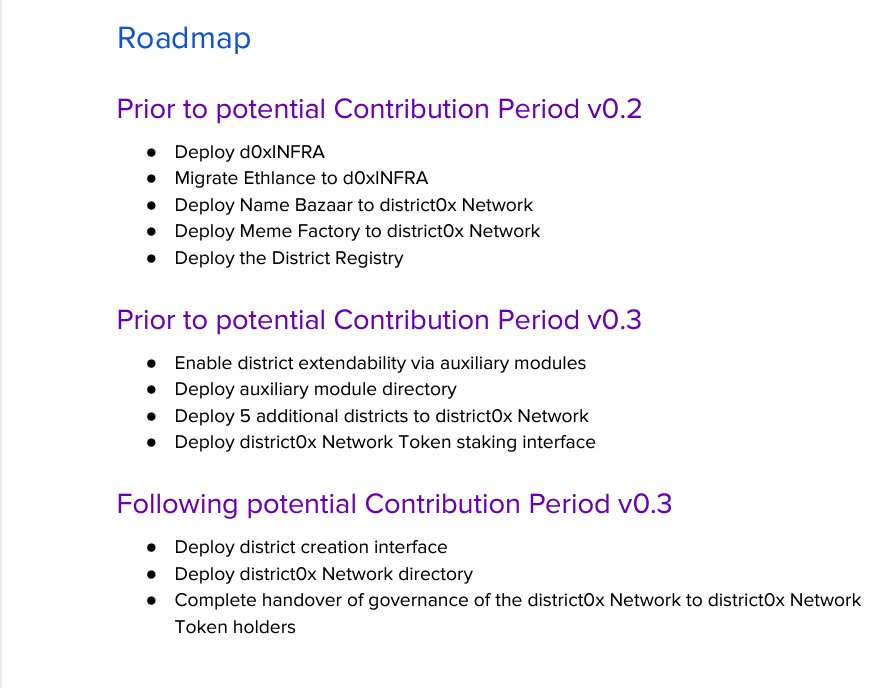 We took a detailed look at the interesting district0x project. Their mission is to enable the creation and management of marketplaces and communities in a decentralized manner. They do this by adapting and actually recreating popular apps and services on the internet to fit their project. All intermediaries who want money for their services or check data are completely eliminated. You are completely in control of the structure, how you set it up, the visual aspect and the management.

The team has been working on this project for some time, since 2017, and there are already or only three districts running live on the platform. However, it is a project that looks well cared for with a passionate team behind it, with an excellent idea. You would almost think that this project will be able to recruit even more other projects in the future, who want to set up a district. Unfortunately there is never a guarantee whether projects will be successful, but district0x has all the beacons pointing in the right direction. This will also directly affect the price of the DNT token. If successful, the token will probably increase in price and if that success does not occur, the price will not increase. So keep following the project! However, if you want to invest in the DNT token, do your own research.