International calls are now easy and cheap. There are several apps that let you call for free and even with video. Well-known examples are Skype or Facebook Messenger. However, there are times when if you don’t have internet, and you have to rely on your SIM card, it can get very quickly, very expensive. Is it perhaps cheaper to exchange your SIM card with a local SIM card? Certainly experienced international travelers will be well acquainted with this roaming problem. They have different SIM cards, each with their own number. That can be quite confusing, for yourself, and for the person who wants to contact you, because which SIM card and what number are you using today? This is exactly where DENT Wireless or simply DENT comes to the rescue.

In this blog we will talk about DENT Wireless and the associated DENT token. I’m going to explain to you what exactly DENT is and how it works. We are also going to investigate the team behind this project and take a look at the course. If you want to know where to buy DENT, you’ve come to the right place.

Please note: please note that the text below about ‘DENT (DENT)’ as well as the explanation thereof may in no way be construed as advice. The choice for whether and in what way you want to trade (crypto) and which choices you make in terms of investment is up to you and you alone. We are not financial advisors.

Here you can first watch a video showing how DENT works.

What is DENT Wireless?

DENT Wireless plans to free the mobile data market from the many restrictions found here. They want to liberalize the mobile data market, as it were. In practical terms, this means that they want to set up their own global mobile and data network, the DENT network. The only mobile network you will then need. You can travel with this network without having to exchange your SIM card in every country. You also don’t have to worry about a bill with sky-high international roaming costs when you get home.

DENT designed the eSIM. This eSIM is built around their own new mobile data infrastructure using blockchain technology. They have launched a transparent and decentralized model for mobile data networks. As a user of this network, you can then choose your personal mobile package on the DENT exchange . These packages are nothing but smart contracts .

DENT Wireless does not only want to reach end users, but also large telecom companies or telcos. By working with telcos you get a win-win situation for everyone. The telcos can reach the largest amount of customers, and the more people participate in the DENT protocol, the more favorable the package prices can be offered.

Of all mobile data purchased, about 15% remains unused. First, the packs have a limited lifespan, often only a few months. Moreover, you usually either use too much data or have data left over. In 2017, according to Cisco , a whopping $32 billion was spent on mobile data worldwide. If 15% goes unused, that’s still $4.8 billion. With the DENT packages you could trade them again on the DENT exchange. This is a much more economical way for the end user. I will come back to the DENT exchange in detail.

How does DENT Wireless work?

DENT works with several of the very latest techniques on the mobile market, which come together in their protocol . This allows you as an end user to trade mobile data on the DENT exchange. The parts of the protocol are the DENT exchange, smart contracts on the Ethereum blockchain , your mobile phone, a web app and virtual operators (what used to be the operator!).

The following diagram gives a good idea of ​​how the DENT protocol works.

The proprietary or native DENT token keeps things running, and is used in the DENT exchange . It is also used within the network to pay for assets. So you can pay for your mobile minutes and data packages with the DENT token. Later I will return to the DENT token in detail in this article. DENT has also found a new and transparent community model to search and trade with mobile data.

It is high time to start looking at the various components of the DENT protocol.

One SIM card that you can use all over the world. Currently, according to their own information, in 60 countries, including the Netherlands and Belgium. You can use your data for 365 days with the fastest connections available. 4G and LTE (Long Term Evolution) connections are both offered. 4G LTE is a fast connection, which allows you to download up to 10x faster compared to 3G.

What are the BENT Teams?

The Bent Teams are an opportunity to share your data with as many people or devices as you want. Sharing itself is free, you only have to purchase the data packages.

What is the DENT exchange?

The DENT exchange is the center of all DENT activities. It is powered by the DENT token and is the first marketplace in the world where you can trade mobile data and minutes.

The following image provides a good schematic representation of how the DENT exchange works with all its components. 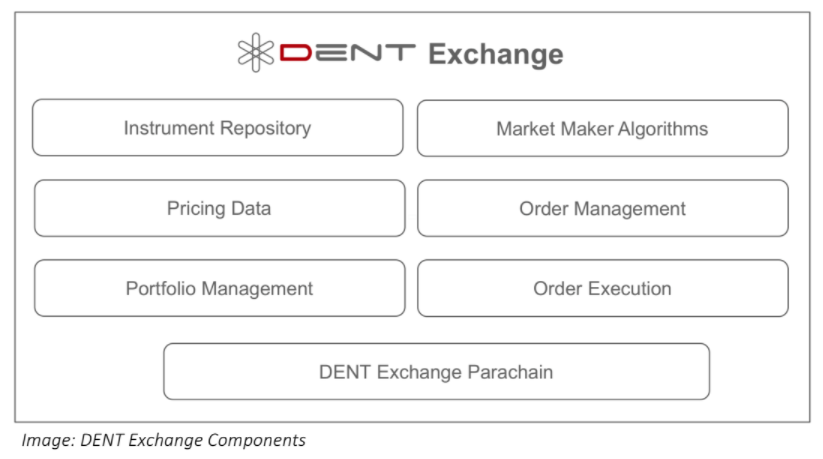 Mobile data is becoming just such a commodity as oil or electricity . That requires a place where you can buy or sell this product, and so there is the DENT exchange. It is easy to participate in this fair. You create an account, set up your 2FA (2 factor authentication) and arrange your KYC (know your customer) and voilà, you’re in. You can now participate in trading mobile data packages, ‘voice packages’, a kind of calling minutes or you can trade the DENT token with Bitcoin .

It actually works exactly like a crypto or Forex exchange.

What are the BENT Web and Mobile Apps?

On the DENT Web, you can view the order book and market depth, place buys or sell, view price history, and some other useful information of interest on an exchange. The mobile app is a simplified version of the desktop version.

Below you can see what the webapp/DENT exchange looks like.

In this setup, the virtual operators or the telcos are the market makers. They offer the mobile data packages for the users.

In this way DENT can process three different payments.

DENT itself makes a profit on the spread and commissions of the IDOs.

This video shows how easy it is to call DENT.

Who is on the team behind DENT Wireless?

The team behind DENT Wireless is full of people who have extensive experience and knowledge of the mobile market. The information about the team is easy to find , which is a good sign, there is no secrecy and everything is on the table. This is not always the case with all projects. Sometimes there are projects where you cannot find information about the team. So, it’s high time to get to know the team behind DENT.

A varied and highly experienced team. More than 30 other people are involved in the project. Their areas of specialization include development, marketing, sales and support. The gap they discovered in the mobile market certainly seems entrusted to this team to grow it.

What is the DENT token?

The DENT token is an ERC20 token that runs on the Ethereum blockchain. It is the native token of the DENT network and you can pay for mobile data packages with it. You can also trade on the various crypto exchanges, so more about where exactly this is possible.

During the ICO (initial coin offering) in July 2017, $4.3 million was raised. There are currently 99.01 billion DENT tokens in circulation, which is 99% of the total stock of 100 billion tokens. That seems like a good number, but according to DENT’s Mikko Linnamäki it is necessary to meet the demand if the protocol goes global with all the active users that it entails.

Below is a chart showing the distribution of the DENT token.

What is the price of the DENT token?

If you want to invest in the DENT token, a good start is to know what the price is. If you are already going to trade, you also want to make a profit. You can make a technical analysis to see what the best buy or sell moment is.

At  CoinMarketCap  , it is just outside the top 100 in place 118. I think this coin has a good prospect, especially if Bitcoin continues to rise in 2021. I think it could experience a good price development. If you want to invest in this coin, it is important to do your own research.

Where can you buy the DENT token?

The DENT token is for sale on Bitvavo  and  Binance . Bitvavo has included this coin in its offer at the end of August 2021. Most leading CEXs also offer this coin, such as FTX, Gate.io and KuCoin . There are also many liquidity pools on DEXs like Uniswap where you can find a DENT pair. Click below to buy on Bitvavo.

What is the best way to store the DENT token?

You have several options to save this token. The safest way is to store them on a hard wallet , also known as a cold wallet. With a hard wallet, such as the Ledger X or S and the Trezor, you are protected against internet hacks.

You can of course leave your DENT token on the exchange where you bought the token. However, now you do not have access to your private keys. The private keys of an exchange remain in the hands of the exchange itself. There is always a danger that a stock exchange will be hacked and then you have a chance that you will lose your coins. These wallets on an exchange are also called hot wallets.

What is the DENT Wireless roadmap?

Despite the fact that DENT was already founded in 2017, the roadmap is still active. The team is busy developing the project further. They’ve had a busy first half of 2021, with an almost even busier second half in 2021.

In the following image you can see what is on the program in the second half of 2021. 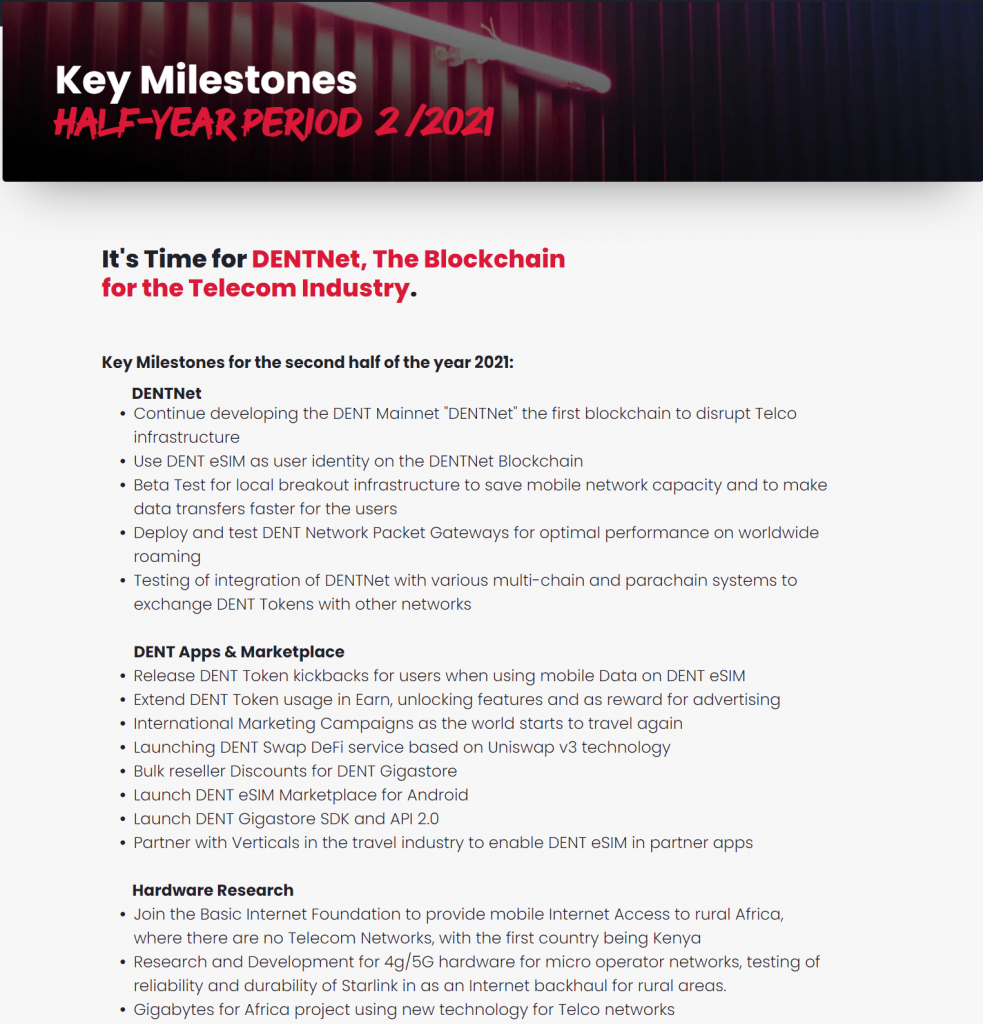 Surely the DENT team has started a revolutionary project. Their goal is to liberalize the mobile data market, in a decentralized way, with blockchain technology. They see mobile data as a product that can be offered at a trade show. For this they have created the DENT exchange. Here you can trade in mobile data packages that are valid for a year and can be offered cheaply.

They not only involve end users in their project, but also large telecom companies. This will eventually reach most users, which in turn benefits the range and price of the mobile packages. DENT can currently be used in more than 60 countries, including the Netherlands and Belgium.

It won’t surprise me if 2021 and especially 2022 will be their big breakthrough year. The team continues to work on the roadmap, and all parts of the project are slowly falling into place. If this breakthrough does indeed happen, it will probably also have positive consequences for the DENT token. However, if you want to invest in the DENT token, do your own research.