Today is the day! BitcoinUSD.com has decided to write a weekly article about the many cryptocurrency coins that exist in the crypto world. Today we start right away with a good and a special coin! Namely Decred! Doesn’t this coin sound familiar to you yet? No worries! In this article we explain everything Decred is and what the function of this coin is. So join us in this short but powerful summary about Decred!

Decred is a cryptocurrency with a strong focus on the community surrounding the project. It is managed by an open board and focuses on sustainable development and sound financing. The great advantage of Decred is that it is not managed by a small group of large investors. This prevents a small group from exerting an enormous influence on both the network and the price of Decred.

But what about that? And what is the origin of the Decred Coin? What does the Decred price do and perhaps most importantly: Where and how can you buy Decred? You can read everything about the Decred/DCR token in this extensive explanation about Decred.

The Decred network is protected by a hybrid model of a combination of Proof of Stake and Proof of Work. In other words, the network is secured by both miners and strikers and therefore no changes can be made to the project that are made up by a small group of people. In this way, the network is also very well protected against attacks and fraudulent transactions. So nice, isn’t it?!

Before we go any further, let’s take a look at a short introductory video from Decred. Why? Because no one can explain how a project works better than the project itself. Are you ready? Here we go!

As you can see in the introduction, there is quite a lot of agreement on the blockchain about the direction of the Decred project. Unlike many other projects, where one group of investors wants to move to the proverbial left and the other group to the right, Decred is all on the same page. This was all created by the hybrid model between the Proof of Work and Proof of Stake that they set up for this.

There is not that much difference between the Decred Proof of Work (PoW) concept and that of Proof of Work in another project. Miners approve the transactions and in return they receive a reward in the form of a number of DCR. Initially, a miner received a block reward of 31.19582664 Decred, but this will eventually be reduced by 1% per 6,144 blocks. That sounds like quite a lot, but this amounts to less than a month per 1% reduction.

As a result, it is now actually not worth it to mine Decred independently with your own computer . You should instead buy dedicated equipment for this or join a Decred mining pool to mine more effectively. A maximum of 60% of the compensation is paid out to miners. The rest goes to the hybrid model.

Then it’s time for the counterpart to mining, the Decred Proof of Stake. Striking has now become almost as popular as mining and in the case of Decred you can earn up to a maximum of 30% in compensation per block. Decred would not be Decred if the staking of the token also worked slightly differently than the original Proof of Stake concept.

You can store a number of DCR coins in the Decred wallet for a longer period of time. In return you will receive a ticket, instead of a fee. With every ticket you receive you can cast a vote. You use this voice to give extra strength to the direction that the project should follow in your opinion. For each vote you subsequently cast, you will receive the ticket price plus a fee back. That way you will receive your PoS compensation.

Before you can vote via your ticket, you must first wait for 256 approved blocks. Only then is it possible to vote. Just like there are mining pools, Decred also allows you to participate in Staking pools. This makes it possible to bundle tickets together with other strikers, so that transactions are missed less often. It is also good to know that during the strike you always remain the owner of your DCR tokens.

The fast mathematicians among us may have noticed that with a maximum of 60% compensation for miners, a maximum of 30% compensation for strikers, there is still 10% left somewhere. That’s right! The remaining 10% of a block fee disappears into the project’s own piggy bank, also known as the Decred Treasury. Money is put into this piggy bank, with which ticket holders can determine how that savings can be used to take the project to an (even) higher level.

You now have a good idea of ​​how Decred works in practice. But how exactly do the strikers and miners give direction to the project? They do this simply by using a voting cycle. This works like this:

In fact, there are proposals made by the developers to make certain updates. This is done in a block that needs to be mined. Once a miner agrees with this update, he must adapt his mining software to the new update. As soon as 95% of the last 1000 blocks have ‘accepted’ this new update, it has been approved by the miners. Now only the strikers remain. Is this the same story with 75% of all strikers? This means that both the miners and the strikers have agreed to the new update and it will come into effect.

You can see this process graphically in the image below: 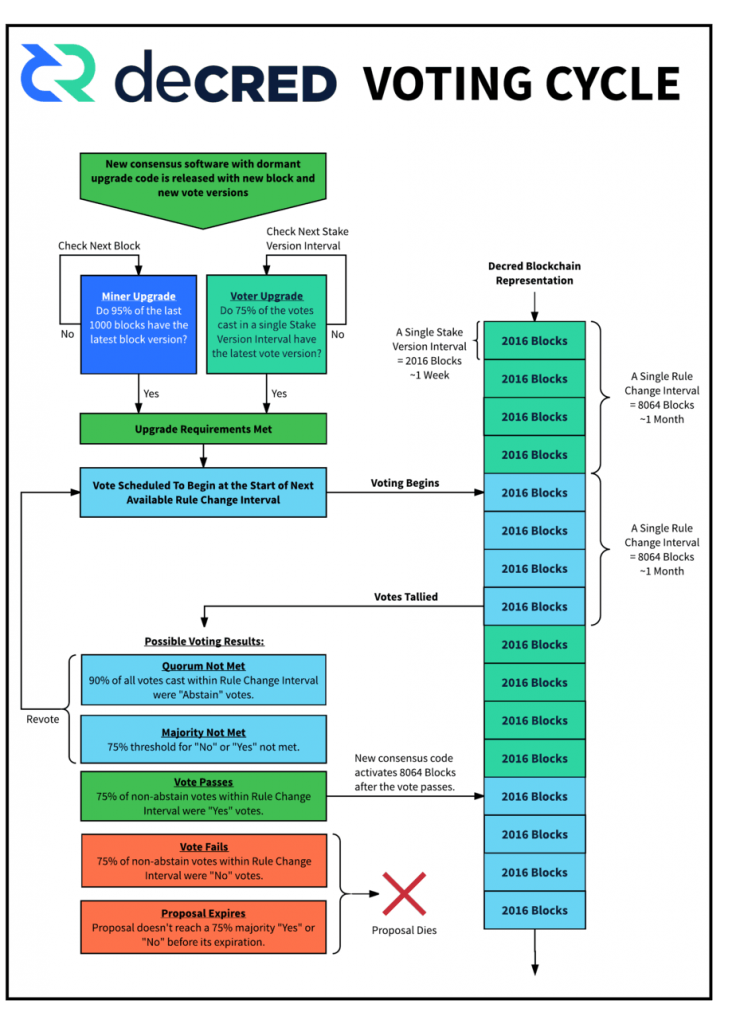 The least secure option is to leave your Decred tokens on the exchange . As soon as your DCR tokens are on an exchange, you run the risk that the exchange will be hacked or that due to a DDOS attack on freezing from a federal investigation, you can temporarily or permanently no longer access your DCR coins. If you want to park your Decred tokens at any cost on a reliable exchange? Then choose the cryptocurrency exchange Binance .

Do you want to buy Decred? Then there are now many platforms and brokers that allow this. Buying Decred is incredibly simple. The easiest for Dutch customers is to do this via the Bitvavo exchange. You can easily create an account here. After you have linked your bank account, it is possible to deposit euros via IDEAL.

After you have topped up your account with euros (or other cryptocurrencies) you can immediately buy your Decred coins. Have you made a profit and do you want to collect this profit? Sell ​​your Decred token again on Bitvavo and transfer the profit back to your bank account free of charge.
Want to buy Decreed? Buy them directly on Bitvavo!