What are Decentral Games?

Decentral Games is an ecosystem made up of several casinos, each of which is a unique dApp. This will be co-owned by holders of the original DG token. The platform is a Decentralized Autonomous Organization (DAO) where all investors partly own or own this virtual casino. It is the first time that a casino has been created in the metaverse where everyone can take his or her chance. Thanks to the transparent nature of the blockchain, every result is demonstrable, fair and open, should any disagreement arise.

Users enter this virtual world with their unique avatars. The technology allows users to see other players and connect with others in the ecosystem through chat features.

The Decentral Games ecosystem does not have its own native blockchain. Instead, it is operational on two other existing blockchains. One of these is Decentraland (MANA). This is a fully decentralized virtual world where players can invest in a piece of land and create their own reality. Think of The Sims, but on the blockchain where players can monetize their own creations. Using NFTs, players can build houses, trade works of art and much more. This is also a play-to-earn or GameFi that may be a possible way of generating passive income.

Decentraland is the place where players go to interact and interact with Decentral Games casinos.

Of course, these virtual and decentralized casinos only become possible when the network can complete transactions. For this, the ecosystem uses the Matic Network, which enables users of the platform to make fast transactions on the Ethereum network. This keeps transaction costs low. With Ethereum’s current transaction fees, this would deter potential users from participating in Decentral Games.

How do Decentral Games work?

Decentral Games is built around ‘Treasury’. This is the digital treasury that powers the entire crypto casino. This acts as the core for all casinos with all the money from transaction fees and other fees collected and held in this public treasury. When players take their chances and actually win, the winnings are paid out from this digital treasure chest. Thanks to blockchain technology and its transparent nature, this treasury is public. So players get transparency as to how much currency is available here.

It is essential here that the Treasury works efficiently, provided that the entire ecosystem and its functions are based on this functioning. It finances the entire ecosystem by on the one hand the aforementioned transaction costs, but also users can provide liquidity and be rewarded for this. As a result, there are always sufficient funds available. Users can also generate revenue in the form of DG tokens in the process. So are you not into gambling? Then you can still generate income by providing liquidity. 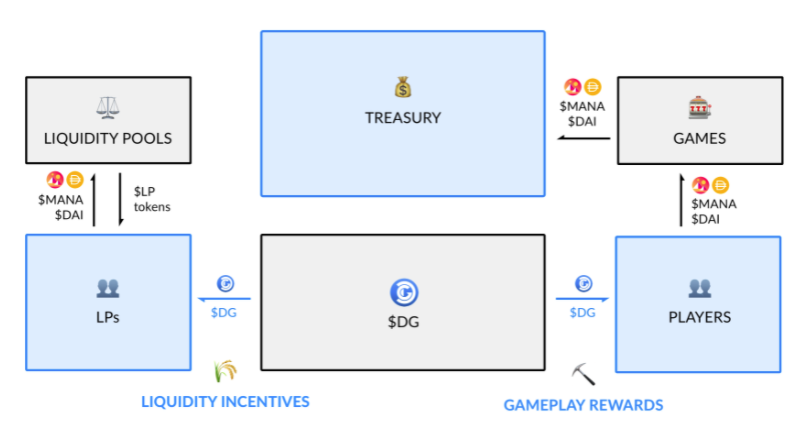 In the metaverse, there are no less than 3 different casinos available. In this virtual world, players can enter each casino individually. Decentraland has a Vegas City District, where each of these casinos is located. It is, as it were, a protocol existing within another protocol. Each room/casino has different features and gives the user a completely different user experience.

The first casino to open was this Chateau Satoshi. It opened in December 2020 during the Decentral Games launch. It has a very distinctive Vegas look with theaters and nightclubs.

As the name suggests, this is an island. Players must physically climb an island to gain access to the casino. This casino is inspired by the architecture of Monte Carlo. The casino itself consists of three floors in total. Players can walk around in this virtual world, explore the building and of course play along with different games and take their chance here.

The most recent casino in Decentral Games is Tominoya, which is Japanese-inspired. Like Serenity Island, this building has several floors, including a conference room where live streams can be held. 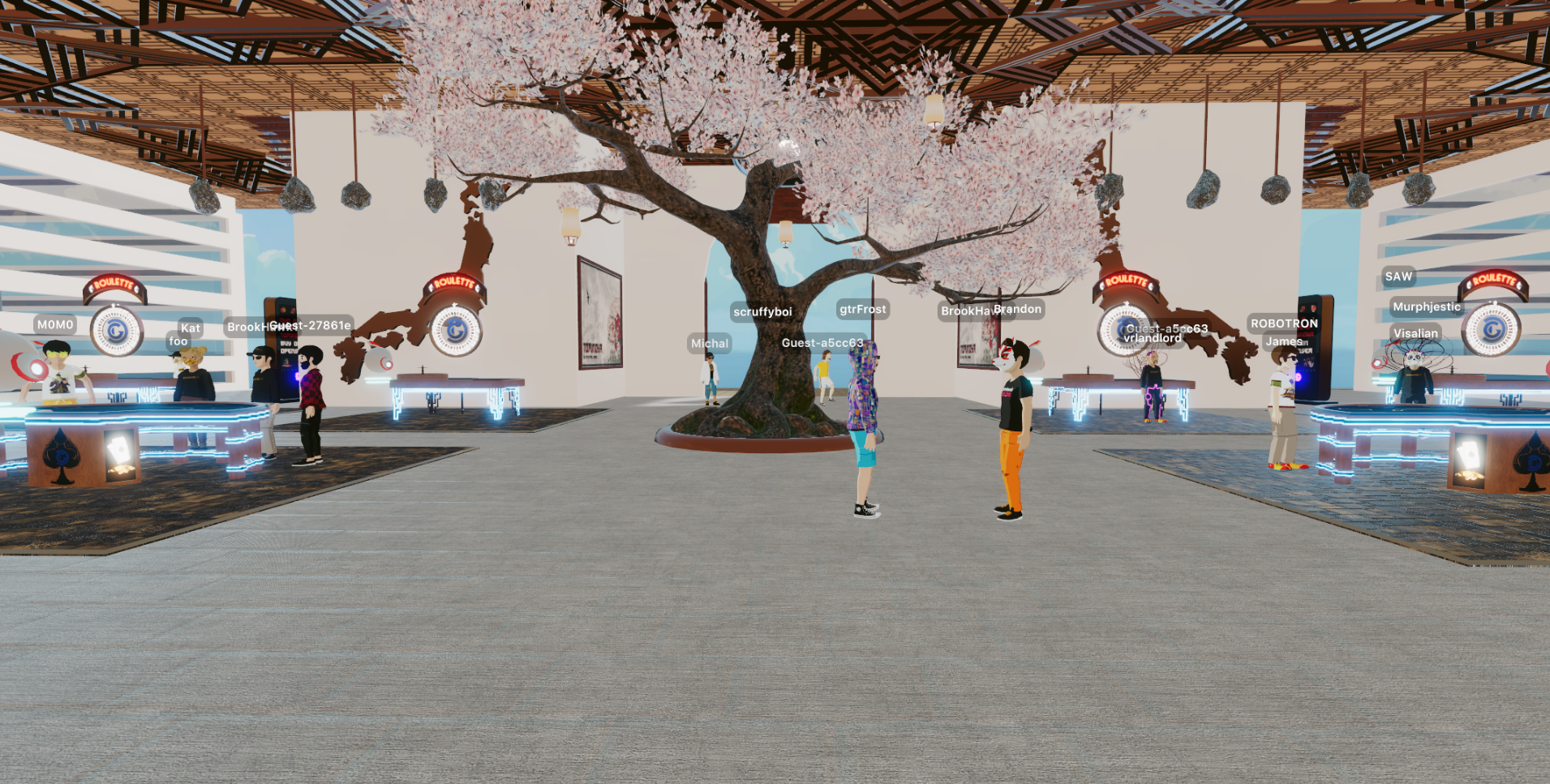 Currently, you have the option to play 5 different games. You can participate using 2 different coins, namely DAI and MANA. DAI is a stable coin on the Ethereum network. Mana is the native token of Decentraland, the virtual world in which these Decentral Games are located. Both are the ERC20 tokens on the Ethereum blockchain but are faster and cheaper than Ethereum.

Each game has different entry requirements and restrictions. For example, there is a maximum number of tokens that you can bet with each game and the reward is also different per game.

DG is an ERC20 token on the Ethereum blockchain that keeps the ecosystem operational. It has several functions as a utility token including governance, the option to mint tokens and even gameplay rewards.

Governance is essential in a DAO structure. Users can propose and vote for changes to be implemented. Each holder of the token can thus help determine the future of the ecosystem. To participate, there are specific requirements laid down in a voting mechanism, including that a user must have a minimum of 1% of the circulating supply of DG Tokens in order to submit a proposal. As a result, the future is only determined by stakeholders.

A popular affair at Decentral Games is these Gameplay Rewards. You can mint and earn DG tokens by participating in different games. These are released based on specific activities done during the game. For example, placing a bet, sending other players to a certain casino or having your virtual alter ego wear an NFT during your game. These are all ways for you as a user to receive rewards in the form of DG Tokens.

At the end of 2020, Decentral Games was founded and launched. This was accompanied by a token supply of only 1 million DG tokens that were minted during the Genesis block. These tokens are distributed over a period of 6 years. 62% of this goes to the community, who have to control the ecosystem, which is equal to 620,000 tokens. 20% will go to the team, equivalent to 200,000 DG tokens. The remaining 18% will go to participants who have been active on the platform since its inception. 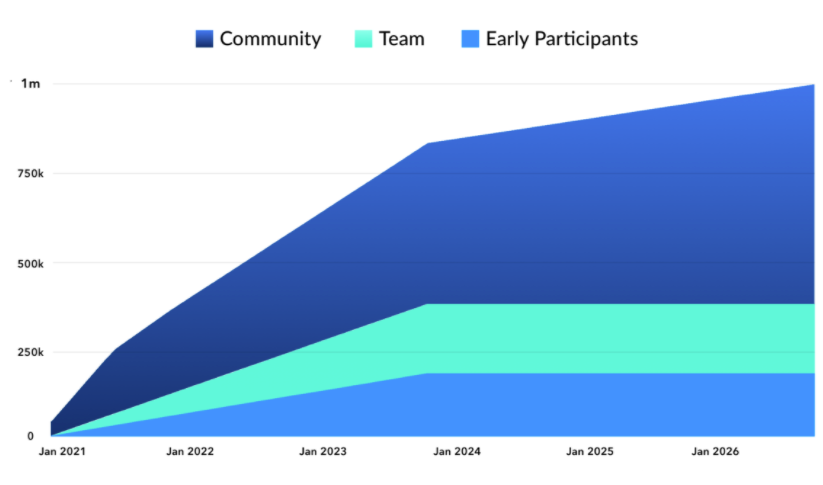 At the time of writing, there are 345,000 DG tokens in circulation with a current price value of $225. One of the governance functions is to submit proposals, only if this person has 1% of the circulating stock available. This rule has been set up in such a way that only interested parties with a significant investment have the opportunity to direct the DAO. In concrete terms, this means that an investor must currently own 3450 DG tokens, with a current value of around $775,000. 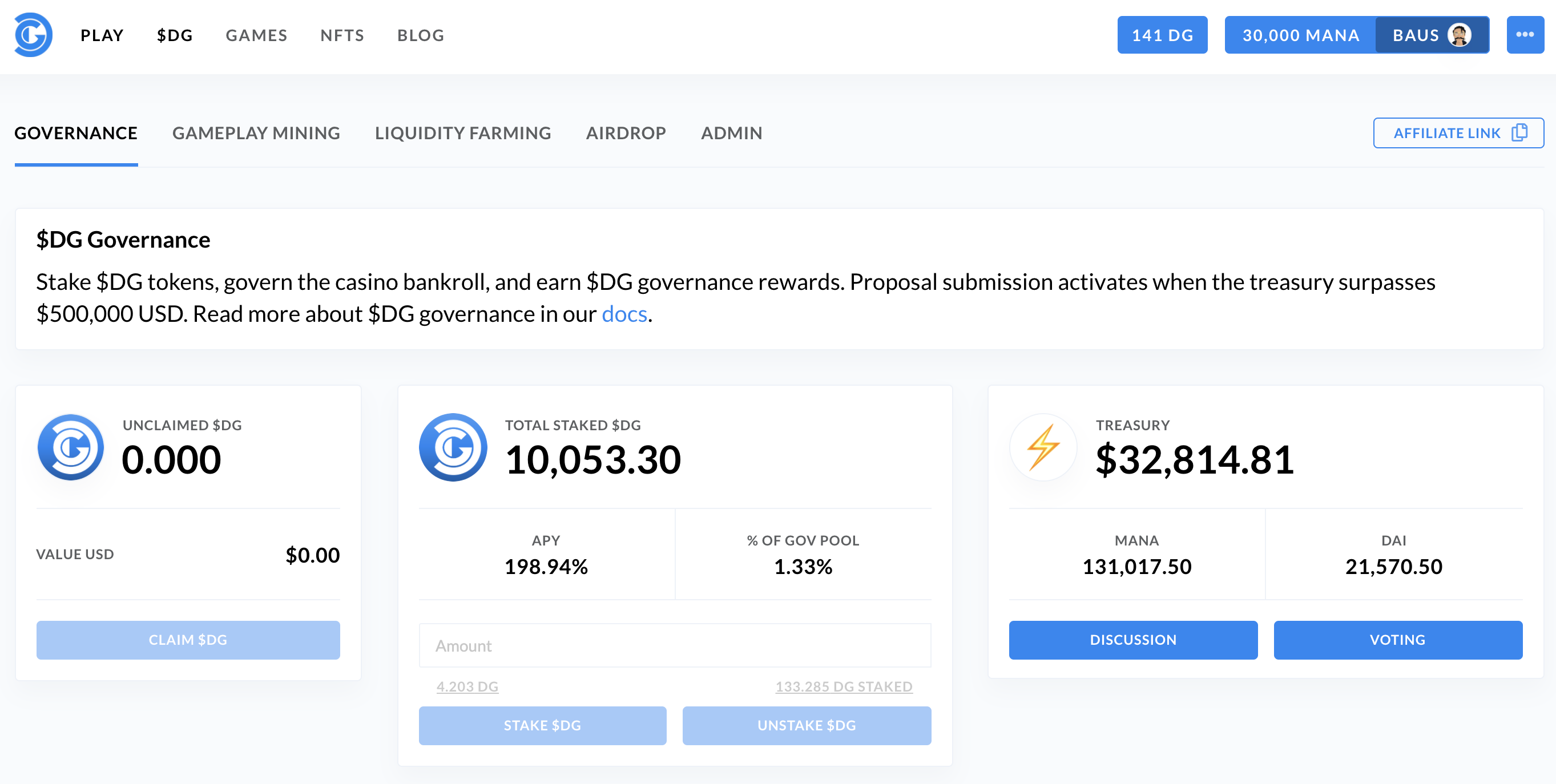 The idea of ​​virtual reality has been around for a long time. That immediately explained the success of The Sims. Technology has developed further, allowing us to enter a virtual world in which we can create our own economy. Decentraland is an example of how popular a VR world is successful on the blockchain where users can create and even monetize their virtual lives.

When we look at the real-life aspects, we see that we are going to implement more and more aspects in these virtual worlds. One of the world’s largest industries is the gambling industry. This has increased exponentially with the development of the Internet and the ability to gamble online. However, there is no transparency here and the results of certain gambling competitions can be discussed. Thanks to blockchain technology and transparency, the popularity of these blockchain casinos will only increase.

Decentral Games distinguishes itself by, among other things, adding real hosts to its casinos. The hosts in the platform are real players, with whom you can interact. For example, you can ask them questions about certain games or certain casinos, where a physical person will answer your questions.

The virtual casino platform in the Decentraland ecosystem was founded by 3 co-founders, each with their own specialization:

Miles Anthony is the founder of Decentral Games. He attended the University of California where he studied economics, among other things. In addition to Decentral Games, he is also a founder at Flux Chargers. This is a company that focuses on developing innovative and sustainable business models that use technology to address fundamental problems.

Steve Becerra is co-founder and CTO of Decentral Games. As a software engineer, he co-designed the gameplay architecture and also created the framework. In addition, he is also the founder of Mockworld, this is a real-time 3D gaming platform. But he has also already proven his services with blockchain. He co-designed Digitpet, a dApp built on Ethereum.

Scott Taboada is the protocol’s technical director. Scott also attended the University of California where he met Miles. He was also co-founder and CTO of Flux Charger. From this friendship and technological expertise, they decided to focus on Decentral Games together.

What is the price of the DG token?

If you want to invest in the DG token, a good start is to know what the price is. If you are already going to trade, you also want to make a profit. You can make a  technical analysis to see what the best buy or sell moment is.

At  CoinMarketCap, it is just within the top 500 in place 463. I think this coin has a good prospect, especially if  Bitcoin continues to rise in 2021. I think it could experience a good price development. If you want to invest in this coin, it is important to do your own research.

Where can you buy the DG token?

The DG token is for sale on  Bitvavo. Bitvavo has included this coin in its offering at the beginning of September 2021. Most leading CEXs also offer this coin, such as  Binance or Gate.io. There are also many liquidity pools on DEXs like  Uniswap where you can find a DG pair. If you live in the Netherlands or Belgium, Bitvavo is a very handy option. You can click on the widget below, then you can immediately buy the DG token. Kopen means buy and Verkopen selling.

A decade after the emergence of blockchain technology, this application is gaining more and more real-world adoption. Bitcoin was initially created as an alternative means of payment, other cryptocurrencies are used for general real-life applications. A popular development is that of virtual reality. Years ago this was only used for entertainment like The Sims, but now it takes on different proportions.

GameFi or games based on the blockchain is developing at an unprecedented pace and its popularity is growing explosively. Casinos are also part of online gaming. Online gambling is not new, but the aspect of decentrality and transparency creates trust and many interested people find their way to platforms such as Decentral Games.

Decentral Games takes this to the next level by using real, live hosts to welcome users into this virtual world. Besides the fact that you can play along, it is also very interesting that users can earn extra DG tokens by participating in the game. Decentral Games will add more games in the future and offer more functionalities so that a wide range of gamers find their way to Decentral Games. This is how the play-to-earn applications are growing and Decentral Games is certainly no exception!