The Chromia blockchain is examining, among other things, the scalability of dApps and has increased it. They are multi-functional and call it a relational blockchain. This is a concept that was developed in 1970 and which we will come back to later. One of the markets they serve is the gaming market. Due to their design, they can process a lot of data at once, which in turn benefits multi player games. However, there are even more applications that we are going to look at.

We will also discuss the price of the CHR token in this blog. We also discuss what the Chromia blockchain does, so you know how the whole Chromia and CHR story works. This is especially important if you are interested in this project and the CHR token.

Please note: please note that the text below about Chromia (CHR) as well as the explanation thereof should in no way be taken as advice. The choice for whether and in what way you want to trade (crypto) and which choices you make in terms of investment is up to you and you alone. We are not financial advisors.

Chromia is a blockchain that you can use to build dApps. They offer great scalability and fast transaction time. They also call their blockchain a relational blockchain. To explain it very simply, it is now possible to merge tables of information and/or data. Because the information is merged, the relationship between the data can be better and faster understood.

This is especially useful with so-called ‘Massively multiplayer online games’ (MMOGs), ie games in which several participants participate at the same time. We just covered My Neighbor Alice in a blog, which is a perfect example of a multiplayer game running on Chromia.

However, there are even more applications that the Chromia blockchain can offer, which we will get to later. See a video below explaining what Chromia is and includes.

The story of Chromia started in 2012, although the name Chromia came much later. One of the co-founders is Alex Mizrahi and he has brought the concept of colored coins to the market. With this revolutionary idea at the time, you can run real-world assets on top of, for example, the Bitcoin blockchain. They can represent objects such as cars or valuable metals such as gold.

They never really took off because Ethereum has the ERC20 tokens, which do this too. Let Vitalik Buterin have just worked on this colored coin project, as a young man. This Vitalik, if you don’t know, is the big brain behind Ethereum. So the circle is complete again. It is therefore not at all improbable that these colored coins have had an influence on the Ethereum blockchain. We are talking about the second largest blockchain in the world at the moment.

With Chromia, the team has started a low onboarding procedure. Every programmer and developer is familiar with the relational aspect. This means that switching to blockchain technology is quite easy. The concept is already known, only it is now applied slightly differently, namely on the blockchain.

The developers can now build dApps in a way that they are already familiar and familiar with. Companies now do not have to make large investments to switch or get into blockchain. The programmers don’t have to learn much new either. A wonderful move by Chromia to make blockchain so accessible. See below the comparison of Chromia with other blockchain projects 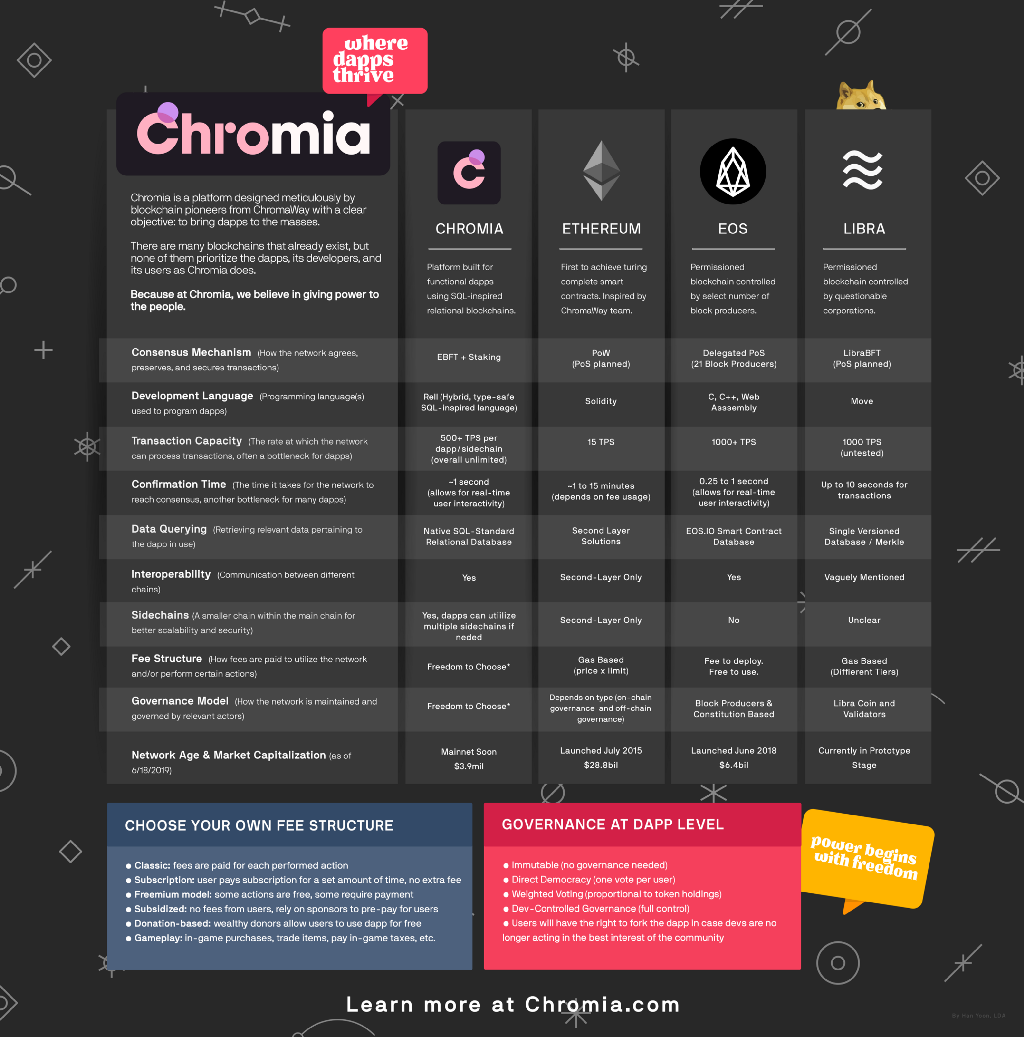 In 2014 Alex, along with a few other people, founded ChromaWay. The first project was Postchain. This was set up and designed to index the colored coins. However, this works optimally as a private enterprise blockchain and is used by governments, among others.
In 2018-2019, the Chromia project was finally started.

Chromia is open source and can be used as a public, private or hybrid blockchain. For example, Chromia can confirm a transaction within two seconds. This makes it possible, for example, to process personal or in-game payments directly.

Most blockchains have created some kind of second Ethereum version, where each dApp works via one or more smart contracts . Chromia, on the other hand, makes each dApp its own blockchain, in the form of a side chain. Each dApp on Chromia runs on a specific number of nodes and can have its own independent token or board.

Now let’s take a look at a few uses of Chromia.

Due to delays in on-chain settlement for derivatives and options, these are usually not possible on a blockchain. However, Chromia has a solution up its sleeve here and it’s called Hedget. These limitations are lifted with Hedget by the relational foundation it is built on. For example, it offers decentralized insurance plus a few other decentralized financial instruments. This gives you a more reliable and transparent service. You also get a faster, better and more effective service for your customers. Most blockchains can’t offer this, but with Chromia it becomes a lot friendlier for both users and developers.

Blockchain gaming is gaining more and more popularity in the crypto world. By running games on the blockchain, you give the participants the opportunity to possess objects from the game. This is in contrast to the traditional games, where everything is and remains in the possession of the owners of the game.

As mentioned before, especially with multi player games, Chromia works very well. My Neighbor Alice is an example, but games like Chain of Alliance, Mines of Dalarnia and Krystopia also run on Chromia.

Benefits that Chromia offers to game developers include;

Strike with CHR, the native Chromia token is minimum for two weeks. You always have a ‘notice period’ of two weeks if you discontinue CHR. Chromia has created a TwoWeeksNotice smart contract especially for this. So every time you want to stop staking, you won’t have the coins again until two weeks later. You can stake on the Ethereum and the Chromia blockchain.

By striking you will, among other things, gain management opportunities. But unlike other blockchains or tokens, the amount of CHR you have is not critical or proportional to your share of governance. It is now not interesting for ‘whales’ to participate in steering. Whales are one or more individuals who own a large number of coins or tokens of a crypto.

Chromia for Enterprises and Business

The Chromia blockchain is very flexible and can be publicly accessible, but can also easily support a private network. A hybrid option is also possible, where only very limited information is publicly available.

For example, in Latin America and the Caribbean there is an app called LAC PropertyChain. You can manage this land ownership scholarship through your mobile. All participants in transactions are updated in real-live time, such as banks, government agencies, surveyors and homeowners.

Can you guess three times on which blockchain this program runs. Well, once is enough!

Chromia has one thing in common with sharding on the Ethereum blockchain, and that is that not all nodes have to approve all transactions. Similar to sharding, a set of nodes is engaged in a particular assignment or transaction. Each blockchain within Chromia communicates with its own set of nodes that issue acknowledgments. This group of nodes is part of all nodes that perform their work on the Chromia blockchain. This explains why Chromia can work so quickly.

The CHR token is the native token of the Chromia blockchain and is an ERC20 token.

The total amount of CHR is 1 billion that will come out, but because 22 million were burned by Chromia, that has been reduced to 978 million. There are 571 million CHR tokens in circulation according to their website. Nearly 32 million CHR tokens are being discontinued at this time.

New CHR tokens will be added monthly until November 2023, after which the maximum amount has been reached. The founders and the team get 4.5% and 2.5% respectively, which is a good sign. If you see that the founders and/or the team get a large amount of tokens, that is usually not a good sign. It is then possible that they are only interested in money. That doesn’t seem to be the case with the Chromia team.

The token is used, among other things, to pay the hosting fees for the dApps, and with this the nodes are paid again. It is also used as a standard payment method within the Chromia ecosystem.

What is the rate of CHR?

Where can you buy the CHR token?

The CHR token is a popular token and can be purchased on almost all major centralized crypto exchanges.

Binance , KuCoin, Gate.io, Huobi Global, Bithumb, Poloniex but not (yet) on Bitvavo. Uniswap 2 is a DEX (decentralized exchange) where you can buy the CHR token.

What is the team behind Chromia?

There are four founders of ChromaWay, which ultimately resulted in Chromia.

Alex Mizrahi is CTO and he is the person who started working with the colored coins. He has been programming since he was ten years old. Since then, he has a long road of software development and experience behind him.

Or Perelman is COO and is a lawyer. He has been in the crypto world since 2011.

Iddo Bentov and Henrik Hjelte are both CEOs and have been working in the crypto world since 2011. Iddo studied at Cornell University in New York, USA and Henrik is actually an economist, but has been coding for over 30 years.

As you can see, these guys were there early on and bring a ton of experience with them. They have made Chromia a unique project with many future possibilities.

Chromia’s roadmap is stable. They have already accomplished many important tasks, but there are also a few more projects that are about to go live.

What they have already accomplished is their consensus system: EBFT. A vault and explorer have also seen the light of day, as has ‘blockchain dependency’. With the latter, a Chromia blockchain can receive data from another blockchain, but you also get the possibility to update configurations and parameters for dependent blockchains via a decentralized administration.

Four projects are currently being actively worked on. This includes ‘Block hooks’, which allow any Chromia blockchain to automatically perform an action at the beginning or end of a blockchain. This is important for dApps. Work is also underway on an Ethereum layer 2 based subsystem.

A cross-chain communication subsystem is also planned. This will give you better communication on the blockchain. And lastly there is a Dev chain launcher. If a blockchain is still under development, you can test dApps on it in a simulated environment.

More is planned over time, but nothing concrete has yet been announced by the team. It is therefore important to keep your finger on the pulse .

We have extensively discussed what the Chromia blockchain is and what it can do. Then we briefly looked at the history of how the founders ended up at Chromia via ChromaWay.

One by one, we took a closer look at the applications for Chromia. From DeFi functions, through staking and above all gaming. They offer interesting ideas with their relational blockchain, which works fast. This is especially important because it can handle many commands at the same time, which is very important in multiplayer games. My Neigbor Alice is an excellent example of this.

The CHR token and team has also come up, and all in all this looks like a good project, solid and well put together. You now know a lot more about Chromia and the CHR token, but do your own research if you want to invest in Chromia.