Are you a fan of a sports club? And would you like to participate in certain choices? Then the Chiliz project is for you! It makes tokens for sports teams, whereby token holders can participate in the decisions that are made.

What is Chiliz (CHZ)?

Chiliz is is a crypto project that created the CHZ token in order to set up a system that facilitates the interaction between elite athletes and fans. Several problems are solved with this project.

For example, currently it is only possible for fans of a sports team to communicate with the team by purchasing match tickets or merchandise. For example, they cannot have a say in the strategic choices to be made.

Buying shares in a club (especially a big club) is very expensive. We are talking about several million euros at the very least. With the system Chiliz wants to set up, each fan, based on their budget, will be able to buy a certain number of tokens related to their favorite club, with each token corresponding to a fraction of a share of the company. After that, all fans will have a say in proportion to the number of tokens they own. So in a sense they are micro-shareholders.

Currently, Chiliz is the idea of ​​the Socios.com platform, which allows any sports organization to earn money by setting up a Fan Token Offering (FTO), linked to the team. The tokens created in this way can be used, among other things, to hold certain rights to manage the squad in question. But also can give the right to participate in VIP events or buy tickets at a discount. Fans are thus rewarded for their loyalty. See a short video below of what Chiliz is and how it works. 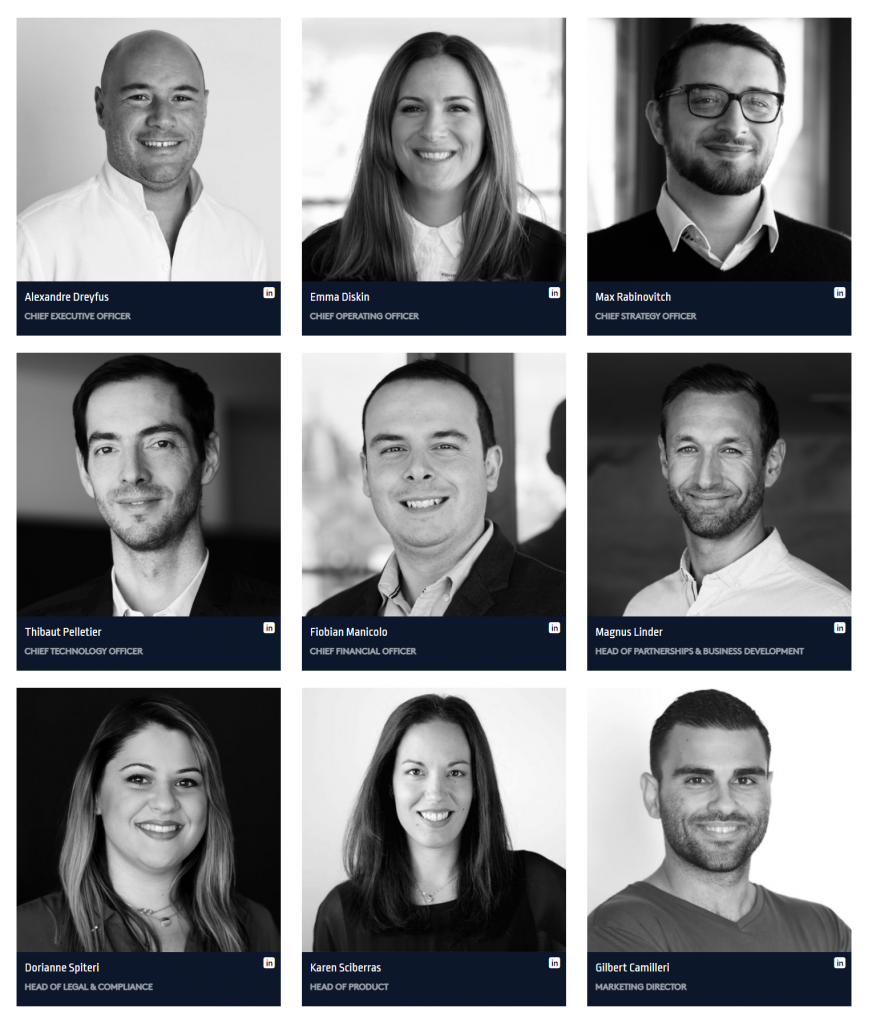 The Chiliz team consists of more than 60 different people. That is a very large team for a crypto project. Normally the teams are much smaller. These are the 4 most important people within the project:

Of course Chiliz needs to earn income in order to continue working and developing. And they do that by charging transaction fees when a transaction is made on the Socios platform.

However, the votes will always be free once the tokens are in the possession of the fans.

Teams and entities using the Socios platform will receive a share of the transaction costs.

The money earned from the purchase of the tokens will go directly to the cashier of the involved team. This will drive teams to sign up and generate profits by encouraging the public to use the platform.

How can fans vote for certain choices?

But how does Chiliz do? At first glance, it doesn’t seem easy to involve fans in the most important decisions that need to be made.

The Socios.com platform allows fans to vote directly on issues related to their favorite club. This platform also makes it possible to create new teams or sports by setting up a funding campaign.

Strictly speaking, the Socios platform will not necessarily give token holders the final say on the management of their club, especially when it comes to an important choice. For example, in an important competition, token holders will be able to exert little or no influence. But they could, for example, choose players in a friendly match, or make a proposal for the design of a new shirt,

The choice of the fans can then guide the decisions of the club’s managers, as their income comes mainly from the people who support their team. The managers will then have a clearer idea of ​​what the fans expect.

How does an FTO work?

Depending on how many tokens a team owns, fans can influence the club’s choices. Were all tokens sold during the OTF? Then these tokens can also be exchanged with CHZ.

During voting, the tokens are not burned. These tokens can also be reused in the future. The tokens are therefore very durable, making it much more attractive for fans to own tokens. After all, they can then participate in decision-making in certain choices not just once, but for a longer period of time. That benefits the interaction. 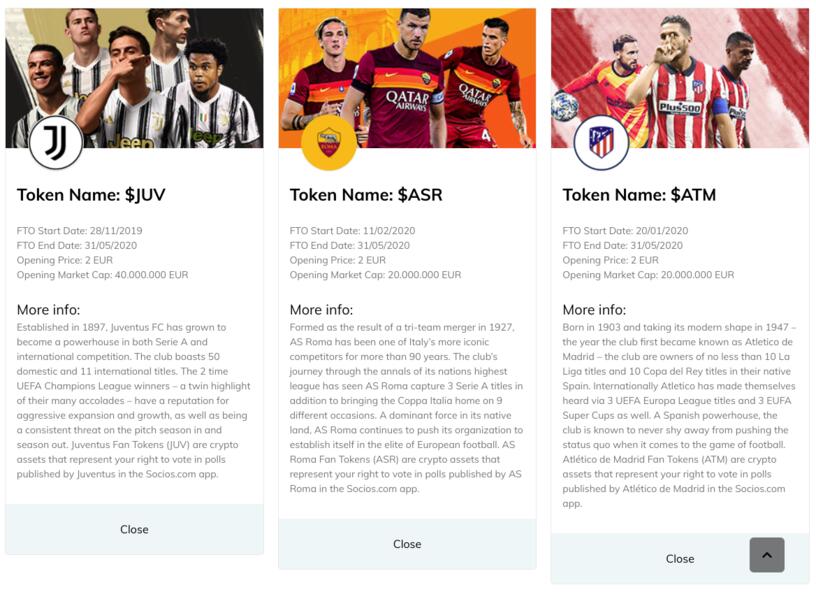 The technical operation of Socios

Socios uses two different blockchains to work on. The first is a ‘permissioned sidechain’, and the second is the Ethereum blockchain.

This is actually a copy of Ethereum, but modified to serve Chiliz only. Everything that happens on the platform in terms of voting and buying/selling tokens is stored on this blockchain. By using Proof of Authority (PoA), transaction costs are significantly reduced.

If needed, this blockchain is also scalable and can easily handle a larger number of transactions. This is useful when, for example, there is a vote in which several million fans will participate.

For example, clubs can use the Socios platform

To summarize all the information concretely, we will show in an example how clubs can use the Socios platform.

Let’s take the two clubs AS Roma and PSG as an example. When these teams register on socios.com, the platform will create two separate tokens, one for each team. These tokens are called $ASR and call $PSG (on CoinMarketCap you can find them as AS Roma Fan Token and Paris Saint-Germain Fan Token).

Whenever a team puts something to the vote, each token holder will be able to voice their opinion. One vote can be cast per token. The more token you have, the more heavily your opinion counts.

Chiliz’s token is called CHZ and has several uses. This application allows users to perform various operations with them:

Also, tokens are destroyed and there is a blocking mechanism:

The release of the outstanding tokens is planned as follows:

How do you store CHZ tokens?

Since Chiliz is an ERC-20 token, the safest way to store your CHZ tokens is a hardware wallet (also known as a cold wallet). These are electronic wallets in the form of a USB stick. The best-known and most popular cold wallets are those from Ledger. We definitely recommend that you store your tokens in a hardware wallet, because this is a lot safer than in a hot wallet.

However, it is possible to store your tokens in a hot wallet . Since the CHZ tokens are ERC-20 tokens, these tokens are supported by almost every online wallet. You can of course also choose to store it in the wallet of the crypto exchange , or to choose MetaMask.

How can you buy Chiliz (CHZ)?

Due to its great popularity, it is possible to buy CHZ tokens on many different platforms. Think of exchanges such as Binance, ByBit, Bittrex and Bitvavo . Make sure you buy CHZ on a reliable platform. It is also possible to buy CHZ on a decentralized exchange (DEX), although this is a lot more difficult than on a normal crypto exchange. That’s why we recommend that you do it on Bitvavo. You can do that within a few clicks.

Chiliz enables sports teams to connect with the fans and let them participate in the decisions that are made. It is an innovative concept that should enable both parties to earn additional income and give the fans the feeling of being more involved with the club.

Currently, the project only works with football teams. Chiliz chose this because it is the most popular sport and the teams chosen are among the most important of the European competitions. Ultimately, many more teams will have to join the platform, as well as new sports. It is even planned that e-sports teams will also be able to join Socios.

At the moment, Chiliz is becoming more and more famous, although it will probably take some time before people who don’t understand crypto and blockchain will also hear about Chiliz. For this there will first have to be teams that register on the Socios platform. Until then, you can in any case already buy tokens from various European top clubs on Socios.com.