Cartesi is an ERC20 protocol whose main goal is to optimize smart contracts to address pressing issues such as high transaction costs and limited scalability of the Ethereum network. By using a variant of the Optimistic Roll-Ups, developers can code with accessible software instead of the rather complex Solidity. This allows many more dApps to be created, which ensures great scalability and adoption.

Cartesi is a multichain layer 2 infrastructure that allows software developers to create smart contracts themselves with the off-chain software tools they are used to. This layer 2 application is a way to make the application and protocol scalable. This is central to the development and implementation of scalable dApps. These applications contain both blockchain components and off-chain components.

These off-chain components run on the Cartesi Nodes. These represent the interests of every dApp user. They also provide developers with reproducible Caretsi machines, which we discuss later in this blog. With this software they can perform calculations on a large scale that are integrated into smart contracts.

What problem does Cartesi solve?

Blockchain technology is in the process of facilitating adoption to the general public. However, there are still a number of technological barriers that stand in the way of this adoption. It is therefore these pain points that Cartesi wants to tackle and solve through their unique approach.

Scalability seems to be a perennial problem. Several layer 2 solutions have been launched in the past to address this lack of scalability, but more is needed. Cartesi aims to improve the scalability limit of Ethereum . The protocol uses the TPS system in their transactions. This speed exceeds payment platforms such as VISA. Cartesi himself speaks of a scalability of an unseen nature. In addition, it uses sidechains where information is distributed over different nodes to spread the size and information transfer.

Cartesi is a centralized development system with its own sidechain. The network uses the latest blockchain technology to launch applications in a secure and scalable way.

The Ethereum network is still characterized by high transaction costs. It therefore seems to be quite a task to tackle the problem of the astronomical gas parties. Cartesi wants to make it possible to even bypass these gas fees. How?

Users of the network pay low transaction costs because large parts of the effective transaction takes place off-chain. Through their own Linux Virtual Machine (LVM), developers are able to transfer this data to a more affordable side-chain network.

Despite the sidechain being significantly cheaper, users or developers of dApps still have to pay to process their transaction, send and/or store information by others. These are paid to node operators via the native token CTSI.

The applications built on Cartisi are able to perform complex calculations and use data from different sources. This helps for interoperability between blockchains and different types of services.

How does Cartesi (CTSI) work?

Cartesi uses its own sidechain to realize scalability. It connects the blockchain technology with their own programming language to create decentralized applications on a large scale. Here they bridge the gap between blockchains and the Linux operating system.

The nodes of the Cartesi network are the place where all off-chain components and calculations of an application are processed and included. Nodes consist of both hardware and software. So, to run an application on Cartesi’s network, users must be able to communicate with these nodes. Within each node there is therefore a Cartesi Machine.

An essential part of Cartesi is the Cartesi Virtual Machine (CVM). Cartesi Machine is a virtual machine within the Cartesi Node that runs on a decentralized version of Linux. This protocol works as a standalone Virtual Machine (VM). In blockchain technology, this VM has the ability to view an entire network as one abstract whole which then acts as a supercomputer solving countless computational tasks. All calculations performed by the Cartesi machine are reproducible and verifiable. This is necessary to guarantee scalability.

The role of this Virtual Machine is to ensure that the correct tasks are performed on smart contracts. In addition, it is designed in such a way that they can seamlessly integrate into different blockchains to make interoperability possible again.

To integrate blockchain technology into off-chain technology, it is necessary to use an oracle. Descartes allows developers to encode their smart contracts using Linux instead of Solidity. Creating and deploying applications using a known programming language can significantly increase the time taken to develop an application.

With the release of Descartes Rollups, Cartesi has introduced scalable smart contracts calculations based on regular software programming. In order to unleash the full potential of these Descartes, the problem of data availability must be solved. Calculations are always done based on data that is entered. As more data is added, we normally face a scalability limit due to this large amount of data.

Noether is Cartesi’s sidechain designed to keep this data available only temporarily. The consensus is locally based in order not to overload the network unnecessarily. Noether uses sharding, offchain calculations and a localized consensus here, among other things. This off-chain structure makes Noether infinitely scalable.

CTSI is Cartesi’s utility token that makes the network operable. It aims to solve the scalability issue as well as reduce high costs through the use of Descartes. CTSI is used for, among other things, staking and compensation paid to validators for processing data on the network. Through Proof-of-Stake, consensus is reached via the individual nodes. The CTSI token is thus the engine to keep this ecosystem operable.

Cartesi has a total supply of 1 billion tokens of which 408 million are in circulation at the time of writing. The other tokens will be released over the years, distinguishing between different aspects:

We see that especially the application in the gaming industry dominates when we look at the number of dApps, but that does not alter the fact that it has many more applications. It can be used to improve performance of any type of application. Think of logistics applications, marketplaces and research platforms. As mainstream developers make their way to Cartesi and discover its ease of use, adoption will be many times greater. Thanks to the connection between Linux and blockchain technology, this development method can be applied for different purposes in different niches.

An important milestone in the development of Cartesi was of course the launch of their first dApp in the first quarter of 2020. In addition, the team is busy with their objectives for the coming period. One of these things is mining on the mainnet of Cartesi. 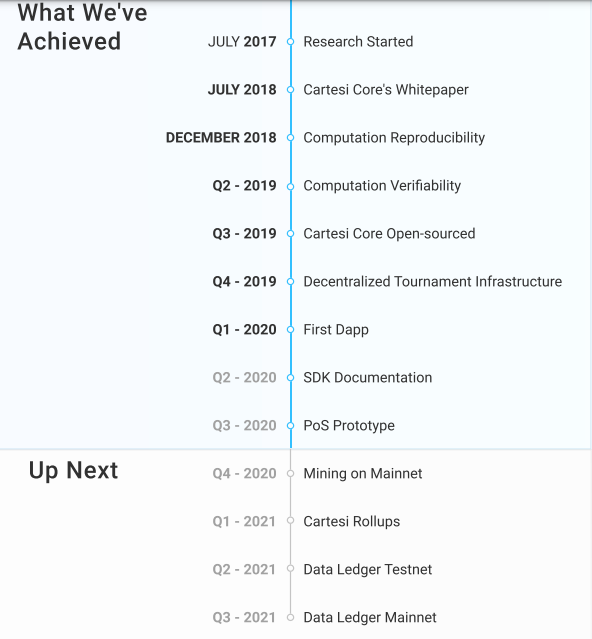 The protocol was started and established in 2018 by 4 co-founders including Erick de Moura, Augusto Teixeira, Diego Nehab and Colin Steil. Headquartered in Singapore and employing more than 45 people, the Cartesi team is expanding rapidly due to their successes.

Their interest in blockchain technology came when Augusto befriended Serguei Popov, founder of IOTA . When the idea arose to launch Cartesi, Popov was one of Cartesi’s first investors and advisors.

Cartesi’s initial idea was to become a marketplace for Artificial Intelligence (AI) for data scientists. While developing Cartesi, they got a broader vision and Cartesi emerged as we know it today.

Erick de Moura, current CEO, is an entrepreneur with over 20 years of experience in the software industry. As an electrical engineer graduate, he has experience in various software designs and development projects. With his knowledge and expertise, he wants to change the future of these smart contracts on the Ethereum blockchain and their implementation through the technology of Cartesi.

The Ethereum network has grown incredibly fast in recent times, but this unprecedented growth has also created a number of problems that keep recurring. With current technology, scalability of Ethereum is a very big problem that the network is currently facing. There are plans for Ethereum 2.0 that should solve the scalability, but in practice the question is how long the implementation will take.

That is why Layer-2 projects such as Cartesi are popular because they immediately solve the problem of scalability by using sidechains and sharding, among other things.

Besides the scalability, Cartesi opens the way for many developers. Linux allows developers to code dApps and smarts contracts much more easily instead of the rather complex technology of the Solidity programming language.

Cartesi provides unparalleled computing power in which safety still prevails. This security takes place through Proof-of-Stake consensus at Cartesi Nodes in the sidechains. This combination ensures a growth in the number of dApps developed as well as the various niches that can and will make use of these applications.