Bytom provides a decentralized system that provides side chain, off chain and cross chain solutions. for what? Because in this way they hope to grow into a platform that will act as an intermediary between all types of assets that can be found today (both physical, digital and on the blockchain). In this article we explain what Bytom is and how it works.

What is Bytom (BTM)?

Bytom is a blockchain protocol for financial applications and digital assets, such as cryptocurrencies. The Bytom protocol allows individuals and businesses to store and exchange not only digital assets (e.g. Bitcoin ) but also traditional assets (stocks, bonds or even data).

But what problem does Bytom solve? Real world assets can be tokenized as we transfer ownership and exchange data to the blockchain. However, from a technical point of view, there is currently no unified way to transfer these assets from the physical world to the digital world. It is sometimes quite difficult to convert something from the real world into a token. The Bytom protocol tries to solve this problem. They want the real world to have a better connection to the blockchain so that people can tokenize assets more often.

Bytom’s team, based in China , consists of some blockchain experts. Founder Chang Jia left the world of science fiction book writing to found 8btc, which is one of the largest Bitcoin and blockchain news sites in China.

The other founder is called Duan Xinxing , and is the former vice president of OKCoin. That is still one of the world’s largest crypto exchanges. Also in the Netherlands there are many people who use OKCoin.

The project started in January 2017 and the team has grown since then. It launched its first test network in September of that year and released the first version of the main network in late April of this year. The project has also officially passed the Howey test, meaning the SEC will not classify the token as a stock.

There are not many other projects that have the same goals as Bytom. Ravencoin is another project (although it is much smaller) that aims to improve the transfer of assets between the real world and blockchain. Unlike Bytom, Ravencoin is ASIC resistant. You can also see projects that use tokens like WAX ​​and Enjin Coin as competitors. While Bytom’s team is starting with the gaming industry, they plan to expand into other asset types as well.

How does Bytom work?

In the Bytom network, you can primarily create decentralized applications (dApps) that are compatible with the most popular Ethereum network in this field. Applications can be written in Solidity (Ethereum’s programming language), which in turn is also the most popular among blockchain developers. Interestingly, the source code is based on the Go programming language.

In the Bytom network, you can also create smart contracts that issue tokens or other digital assets, as well as pay dividends or create secure contracts. The network itself is based on the Proof of Work (PoW) consensus algorithm, which means that miners take care of creating new blocks and confirming transactions. Security is guarded by the original Tensority cryptographic algorithm. 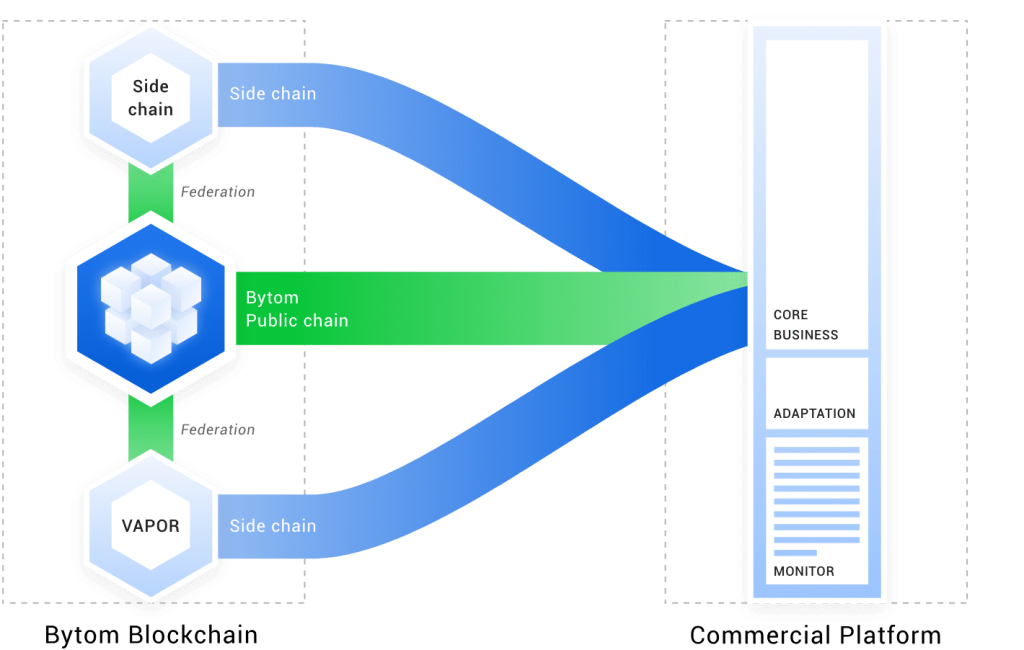 Bytom’s goal is to bridge the gap between the physical and digital worlds, and to build a decentralized network where different tokens can be registered and traded. Bytom’s three asset types are:

You can trade all these assets on the blockchain using the Bytom protocol. And this has many advantages. Capturing ownership of assets and exchanges on the blockchain creates a more efficient and secure system than what is currently available.

It eliminates many of the problems that middlemen create when transferring assets and keeping track of them. Eliminating intermediaries reduces costs and transfer time. This transfer also has the advantage of giving you full control over your assets. You no longer have to rely on a third party to keep accurate accounting records as they are kept in the blockchain. And because the blockchain’s registry is distributed globally across all nodes, there is no single point of failure where a malicious person can manipulate the data.

The Bytom protocol also allows for transactions between blockchains via side-chains. To do this, as a developer, you simply create a smaller version of the blockchain and make API calls through smart contracts to monitor network activity on that blockchain. Call options allow you to transfer assets from one blockchain to another and even pay dividends through the side-chain.

The application layer is the layer that you as an end user have to deal with. This includes the mobile and web applications you work with to manage your resources. Interaction with this layer leads to contract calls on the contract layer.

The contract layer contains two types of contracts. The first, the Genesis contract, issues and controls other smart contracts on the network. Most importantly, it ensures that all assets using Bytom follow protocol standardization rules.

The next one, the general agreement , has two similar functions. The first function facilitates the exchange of assets between protocol users. The second implements and verifies dividend distributions. To deploy a new good through the general contract, you must first send it to the Genesis contract for approval.

Finally, the basis of the Bytom protocol is the register layer . This is where Bytom connects to the blockchain. This blockchain is public, requires no authorization and uses a Proof of Work (PoW) consensus algorithm. Unlike other PoW projects, it is possible to use an ASIC to mine on the network. In fact, in the project’s whitepaper, Bytom’s team encourages everyone to start doing just that. 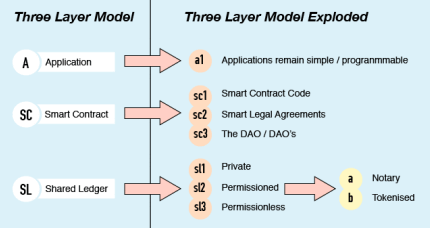 Bytom’s token is called the Bytom token (BTM). Currently (April 2021) there are 1.424 billion BTMs in circulation for a total inventory of 2.1 billion that comes into circulation through the sale. The team has distributed 30% of this stock to ICO participants and created a pool of rewards for miners that represents 33% of the total stock. The remaining tokens are held in reserve, used for business development or given to private investors.

What can the BTM token be used for?

Where can I buy Bytom (BTM)?

The Bytom token, which was created in 2017, is available for purchase on most crypto exchanges. We recommend that you use Binance or Bitvavo. These crypto exchanges are very safe, and usually also offer the best liquidity. That means you can always buy and sell BTM for the best price. Of course you can also use another crypto exchange .

It is also possible to buy BTM on a decentralized exchange, such as Uniswap or Sushiswap . However, you will have to go through many more steps here, so there is a greater chance that something will go wrong. If you want to go for security, it is best to opt for a central exchange.

The price of Bytom

Bytom has had a bumpy course over the course of its existence. Aside from a brief spike just after the coin started selling in August 2018, the price remained relatively stable at around $0.08 for most of 2017. The price rose slightly when it passed the Howey test in October 2017, but didn’t see until the middle of December saw significant growth, at the same time as it rose with the rest of the market.

The Bytom price, which continues to track the general market, fell sharply in January 2018, but has recovered nicely since then. By the end of April that year, the BTM price reached its all-time high of $1.13. In April of 2021, the price has fallen to a value of $0.22. As with most other projects, the announcements of partnerships and the adoption of other technologies are likely to lead to further price increases. The future will show whether that will actually happen.

Is it smart to buy Bytom?

It is difficult to say whether it is wise to buy Bytom. That depends on several factors. Are you looking for a long-term investment? Then Bytom could be a good choice. Bytom does not experience significant price swings, making it perhaps not the most suitable currency for short-term investments. In that case, you would be better off going for another cryptocurrency.

However, you will always have to do your own research before you decide to invest in a token or cryptocurrency. You can do this by means of a technical analysis , where you look at the price, or by means of a fundamental analysis. With the latter, you will mainly do research into the operation, the team and the market in which Bytom is located. Always base your conclusions on your own research, and not on what someone else thinks or says.

We’ve talked about tokenizing physical assets many times in this article. It is possible to tokenize existing financial assets, such as stocks, valuables, real estate or bonds by storing them as tokens on a blockchain.

But what are the benefits of tokenization? On paper, it provides several benefits. In this way it mainly ensures better liquidity. It also ensures greater geographic opening of the market. For example, today it may be difficult for investors in Asia to invest in unlisted US companies. It is also beneficial on a time basis as the crypto and token market is always accessible. In a stock market, opening hours are associated, while there are no opening and closing times associated with the crypto market. This allows you to trade in tokens wherever you are, whenever you want.

Tokenization also provides greater transparency. So it is much easier to perform checks. These checks can also simply be automated on the blockchain. There is therefore no need to set up a body for this.

Bytom is therefore a Chinese blockchain project that aims to link the physical and digital worlds. The ecosystem aims to create an environment that will provide a solution to numerous problems caused by the management of assets, virtual or physical, blockchain or not. In other words, it provides a solution that facilitates the exchange of any type of asset on its own blockchain, Bytom. The BTM token represents a title on the blockchain. It is necessary to perform a series of operations on the blockchain.

The team behind Bytom is based in Singapore. Unlike most blockchain projects, Bytom does not try to discourage ASIC mining. In fact, the opposite is true. It uses the Tensority algorithm as a Proof of Work protocol. This algorithm is specifically designed to support artificial intelligence technology, thus enabling the use of legacy ASICs for mining BTM.

The share price of Bytom has already risen sharply in the past. The question is whether this will happen again in the future, because the value of Bytom has been very stable for a long time now. That is why as a short-term investor it might be better to choose another crypto currency. Unless of course you have a lot of faith in the Bytom project. The future will show what the price of Bytom will do.