More and more new applications for blockchain are being added. And these applications do not always have anything to do with cryptocurrencies. Just think of NFTs for games, or DeFi solutions for the insurance sector. Now there is also a major blockchain project that is inventing a new kind of internet. That project was developed by a group of computer scientists from Princeton, and is better known as Blockstack.

In this article we explain more about what Blockstack is, how it works and what you can do with this crypto project. At the end of this article you will also know exactly how to buy the token of this project, STX, and where to keep it.

What is BlockStack (STX)

The idea behind Blockstack (STX) is that users should be able to own and control their data stored on the Internet. Blockstack was created to adapt the concept of blockchain to all the elements that make up the internet, and aims to build an ecosystem within which decentralized applications (dApps) can develop themselves. Instead of developers having to rely on third-party servers to work with their data, the system replaces the trust points that usually give users access to information via blockchains.

The main reason why the traditional method of online data management is considered problematic by the team at Blockstack is that not all connections are properly secured. Leaks even surface regularly, making it clear that an enormous amount of data from users has been made public.

Though the system was conceived and created in 2013, Blockstack has only really gotten more attention since 2019, when the US SEC (Securities and Exchange Commission), which is the US financial markets regulator, approved its $28 million token offer. This was an unprecedented decision that has never happened before.

How does BlockStack (STX) work?

Unsurprisingly, the ambitious goal of replacing and improving the current workings of the Internet cannot be achieved without a solid foundation. Blockstack (STX) therefore contains many components and protocols, each of which contributes to giving users complete control over their data and identity. With this system and a comprehensive set of tools, users can go from “zero to dApp” in less than an hour, as Blockstack puts it. Some of the elements the system is known for are the Stacks blockchain , the STX token , its user-controlled storage solution ( Gaia ), and the blockstack authentication feature .

The entire Blockstacks (STX) system is built on the Stacks Blockchain, which coordinates the global consensus and layers and enables the system’s own token. Consensus is maintained by the Tunable Proofs feature , which allows the blockchain to set the election for a leader. This means that different mechanisms can be used and adapted. In this way, the blockchain integrates the hashing power of the Proof of Work (PoW) mechanism. In this way, Blockstacks wants to get the best out of existing techniques. It also ensures that it ignores the disadvantageous functions.

The proprietary protocol includes both a PoW consensus and Proof of Burn (PoB), where the underlying tokens are sent to a non-distributable address when transactions are validated. Instead of using computing power, Bitcoins are in a sense burned as fuel. If a miner’s transaction matches a “winning” block, he receives a reward for the work he has done. See below how the ecosystem of Blockstacks works. 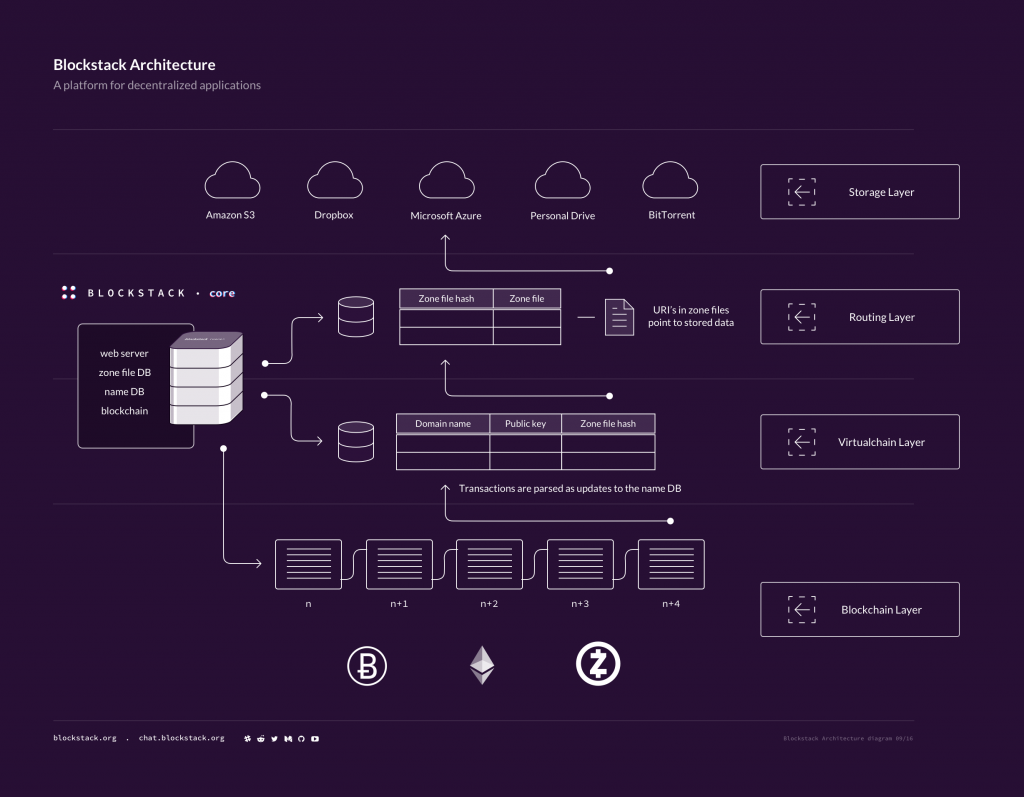 Gaia is Blockstack’s user-controlled storage system. It enables interactions between private data vaults hosted by individual users and applications. This means that the data vaults in question are not stored directly on the blockchain, which only records the location of the data in Gaia and not the data itself.

The idea is to take advantage of established cloud service providers and their infrastructures without having to trust them or actually entrust the data to them. Here too, Blockstack extracts well-functioning functions from existing software.

Blockstack (STX) forms an ecosystem in which users must be authenticated to connect to dApps, ensuring an optimal level of security. The method in question contains unique identifiers with universal usernames. A public key unlocks the software instead of a password. The Blockstack authentication is completely managed by the blockchain itself and by the Blockstack naming system. The latter is a registry of identities and applications whose function is to distribute decentralized public keys.

Token Stacks was launched in 2017 and has become one of the most remarkable features of Blockstack. Stacks allow users to exchange their tokens for a variety of actions they wish to perform. This can involve transactions, registrations of digital assets, anchoring of the app chain and execution of smart contracts .

In accordance with AML (Anti-Money Laundering) and KYC (Know Your Customer) laws, the sale of Stacks tokens is regulated by the SEC. This involves a confirmation process. While some may consider this one of Blockstack’s drawbacks, operating with SEC approval means STX can be sold with public call issuance. This represents an advantage of Blockstack over Bitcoin and will help launch new cryptocurrencies and blockchains that can leverage Blockstack (STX) success model.

Why should you use Blockstack (STX)?

Blockstack (STX) is mainly used to build decentralized blockchain applications, which are better known as dApps. The system describes itself as a full-stack computing protocol for building next-generation applications in which developers and users can collaborate in a fair and secure manner. With Blockstack, developers and users regain their digital rights and take advantage of protocols and development tools created to ensure their freedom.

Specifically, Blockstack users are given digital keys that will protect their entire digital life and allow them to use any software and applications they wish to interact with. These keys provide convenience and security. The promise of a decentralized internet is a web where no one can buy or sell data without the consent of the individual.

For developers, blockchain technology provides a basis on which they can build software that respects the digital rights of users. Rather than just using the blockchain for the exchange of value, DApps also depend on it for data sharing and for interacting with supporting applications.

The problem of the internet

Blockstacks was thus conceived to solve certain problems of today’s internet. But what exactly is the problem that Blockstacks is so eager to solve? That is mainly that user data is not safe. It necessarily means that the security of the data is poor, but above all that this data is often sold.

Every software developer wants to make money . Consider, for example, Facebook . Using Facebook is free, which means that you often pay with your data. Facebook sells your data to marketers who want to show their ads to you.

However, this is not a problem that only occurs with Facebook. All the big tech giants like Google, Instagram and Twitter are selling data from their users. The servers may still be very secure, but when the owner of the server then resells the data, it is in fact not a secure system at all.

It also happens often enough that servers are not properly secured at all. You have probably seen many times in the news that there is a data breach at a large company. That means hackers managed to break into a company’s server, then steal data. Subsequently, the customers and users of this company are the victims of this data breach. As a user, you must therefore be confident that others will properly protect your data and not sell it on.

Blockchain can solve these problems because the security of the blockchain is much higher than that of central systems. For example, it is impossible for an outsider to see the personal data of users of the blockchain. In addition, all information is also stored decentrally, so that there is not one authority that has full control over user data.

Blockstacks therefore wants to solve these problems with the technology they have designed. The security of user data is paramount, so the team will do everything they can to prevent your data from leaking.

How do I buy Blockstack (STX)?

It was very difficult to get hold of Blockstack (STX) at first. This is because in the past it was not for sale on traditional crypto exchanges, such as Binance or Bitvavo for example . And it still is for US citizens, because they are not allowed to buy these tokens on a crypto exchange like Binance.

Fortunately, that is no longer the case for the Dutch at the moment. It is possible to buy STX tokens on the crypto exchanges that you probably already use. However, this is not always the best choice to buy STX for the following reasons.

Many crypto exchanges do not have enough liquidity or are not safe enough, making it risky to use these exchanges. For that reason, we recommend that you buy STX on, for example, Binance or Bitvavo. These are reliable crypto exchanges where you can buy STX tokens without a doubt. You can do this by paying with iDeal, PayPal or, for example, credit card.

How do I save Blockstack (STX)?

The Blockstack (STX) system provides its users with a wallet and a ‘seed phrase’, or ‘mnemotechnical phrase’ (a combination of 24 words) to secure their token storage. This phrase acts as a PIN and opens access to the wallet and token allocation. It is extremely important to mention that this password cannot be replaced: whoever loses his password, will also lose his wallet and therefore tokens for good. Therefore, you will need to write this sentence down on a paper document that can be kept in a safe place. This remains the most practical solution to avoid the risk of theft.

The Blockstack wallet (STX) is not compatible with any other cryptocurrencies. It is therefore impossible to store Bitcoins or other altcoins in this wallet.

The price of STX

Of course, the price of STX rises and falls continuously. Obviously you want to buy these tokens for the best price. That is why it is wise to regularly monitor the price of Stacks. This way you can determine for yourself when is the best time to get into this cryptocurrency. The price of STX can be found in real-time at:

Thanks to its innovative principles, Blockstack could well transform the Internet as we know it and finally offer users a much more private alternative. Several milestones are planned, and the team leading this ambitious project is ensuring efficiency and measurable improvements. This makes Blockstack (STX) an option worth considering for many developers looking for forward-looking solutions.

When you want to buy STX, we always recommend that you do good research on this coin yourself. Of course you want to be sure that it is a profitable investment. You can do this by performing fundamental or technical analysis on Blockstacks (STX).