The gaming industry has conquered a place in our society for a long time. Young people in particular can play a game for hours on end. However, blockchain technology has brought about a change in the gaming industry. Now if you play a game that runs on the blockchain, you can take ownership of game parts. In the long run, some games also give control over the game to the participants of a game. But one of the most important changes is that you now also have the play-to-earn (P2E) concept. Not the owners of a game, but the players themselves can now earn money by participating in a game. Axie Infinity is the leading game in this, and will break just about all records in 2021.

In this blog I am going to explain what Axie Infinity is, how to play it, and what their AXS token is. Axie also has a native token, Small Love Potion (SLP), which I’ll be covering as well. Come along and find out why Axie Infinity is a hot item in 2021.

Please note: please note that the text below about Axie Infinity (AXS) as well as the explanation thereof should in no way be construed as advice. The choice for whether and in what way you want to trade (crypto) and which choices you make in terms of investment is up to you and you alone. We are not financial advisors.

Below you can already watch a video explaining this game from the Axie Infinity YouTube channel.

What is Axie Infinity?

Axie Infinity is an online game where you can earn tokens by playing skillfully and contributing to the ecosystem. This game is inspired by the Pokémon world. The game has animals where you have to play tactically by fighting, collecting, raising and building on land in a kingdom, for your Axie animals. This game is also based on land ownership, and all animals and land are NFTs.

Besides being a fun game, it has also become a social network and place where you can find work. The strong community of players and the play-to-earn (P2E) option have made this happen. This, in turn, is due to the game’s early success.

Play-to-earn is the keyword here and means that you can earn money in a game by completing tasks and/or assignments in a game. In 2021, the P2E model has literally exploded in the crypto community. The Axie Infinity token has seen an unprecedented price increase from June 2021.

How does Axie Infinity work?

Axie Infinity works quite simply. The game allows you to fight with other players and earn money when you win. You can also breed Axies, up to 7 times per Axie. This prevents hyperinflation of Axies in-game. You have to pay for this, and every time you breed a new Axie, you pay more. All Axies have different properties. 50% of these traits come from the parents.

There are over 500 different body parts for Axies , with even more new features in the pipeline. Axies are further subdivided into the following types; Beast, Plant, Bug, Bird, Reptile and Aquatic. As if that weren’t enough, there are also four different levels of rarity; Common, Rare, Ultra Rare and Legendary. Add to that a Mystic Axie, and it’s almost impossible to find two exactly the same Axies. This construction of the Axies is somewhat reminiscent of the CryptoPunks from Larva Labs , although there are ‘only’ 10,000 made. The numbers of Axies are almost impossible to keep up with.
This way you can plan your breeding to get Axies that have value in the Axie marketplace and are in demand.

In the following image you can see the difference between a normal and a Mystic Axie. 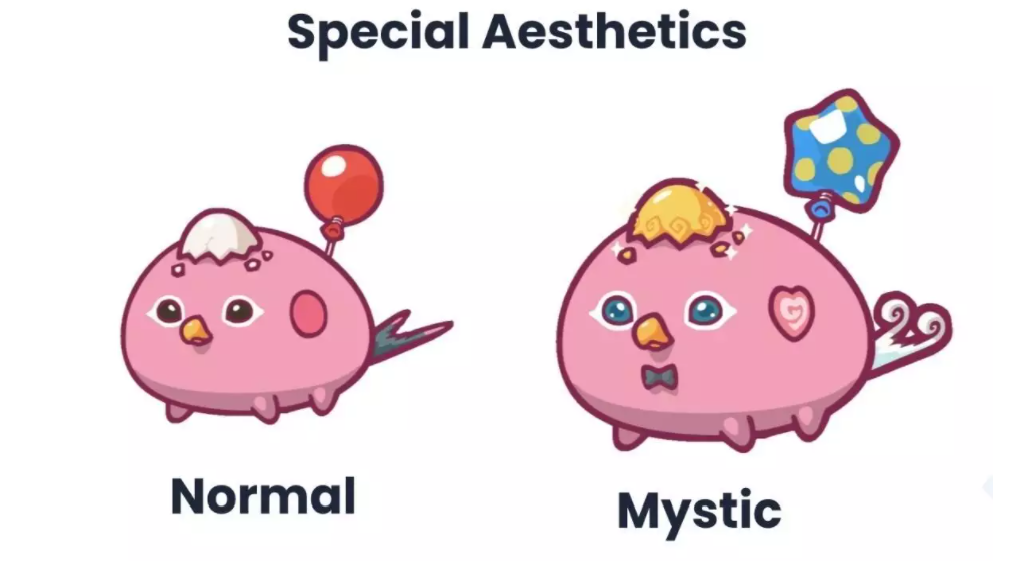 The Axies you breed can then be sold in the game’s marketplace.50,000 Axie NFTs have been sold every day since early May 2021. Daily sales of $25 million are no exception. More on this in a moment.

You need a minimum of 3 Axies to participate in the game. A downside to the popularity of the Axie game is that in early 2021 you could buy an Axie for $5-$10. That party is now over, for an Axie you will soon pay $350. That means you need a minimum of $1,050 to get started with the game.

It’s a strategic and time-consuming game, because breeding Axies requires precision. It is important to grow the right traits in an Axie. In addition, you have to carry out assignments for which you get ‘energy’ again, so that you can continue playing.

Below you can see various Axies. The combinations you can breed are almost endless.

What is Axie Infinity’s revenue model?

Axie Infinity’s revenue model consists of revenue from in-game sales, such as land. Furthermore, Axie takes a 4.25% rate for buying and selling Axie NFTs. There is also a cost of raising Axies. Any game owner would be thrilled with such returns. However, the Axie Infity team has a slightly different view on this, letting 95% of the profits flow back into the game.

Despite the fact that it is still a fairly new game, it has already generated a lot of turnover. It was launched on the market by Sky Mavis in 2018 . Meanwhile, this game tops the daily, weekly and monthly lists for most players everywhere. According to the Axie white paper, they have generated 13,000 ETH as of December 2020 alone. That was already more than a not-so-fashionable $16 million US dollars. This year it went all out. $90 million was earned in July 2021 alone. The other top ten-listed play-to-earn games collectively grossed $41 million. Other P2E games include the Sandbox, Decentraland , My Neighbor Alice  and Polka City .

How can a player earn money in Axie Infinity?

By the way, as a player in the Axie Infinity, you don’t earn AXS tokens, but Small Love Potion (SLP), the native token of this game. This token pays you out when you win in the game, and you pay for breeding and raising Axies with it.

This in turn is one of the reasons why this game is so popular, and we are seeing people start playing this game in several developing countries. An average player can quickly earn 4,500 SLP per month. At the current rate, that’s $1,500, which is a lot of money in such countries. You can then exchange the SLP token for fiat money.

Especially in Cuba, the Philippines and Vietnam, there has been a large increase in players since the end of April 2021. The number of players is also growing in Qatar and the United Arab Emirates. In these countries it is mainly workers from developing countries who work there for low wages.

The Ronin side chain

This video gives a good idea of ​​what this side-chain does.

Who are the team behind Axie Infinity?

The team behind Axie Infinity are part of Sky Mavis from Singapore who released the game in 2018. At the end of August 2021, 65 people will be working on this game full-time . The headquarters for Axie Infinity is in Ho Chi Minh City in Vietnam.

What is the AXS token?

Axie Infinity Shards (AXS) is an ERC20 token and is also the native governance token. This means that if you own AXS, you can help determine the future of this game by controlling it.
You can also discontinue AXS and earn passive income from it.

The following image shows the different uses of the AXS token.

In the image below you can clearly see the release schedule of the AXS token that is spread over 65 months.

What is the SLP token?

The Small Love Potion (SLP) is also an ERC20 token, and you can earn this token by playing the game. It is an important token, because with SLP you can breed Axies.

A total of 1.2 billion SLP tokens have been created and are in circulation. It is quite unique for an in-game token to be listed on a crypto exchange.

What is the price of the AXS token?

If you want to invest in the AXS token, a good start is to know what the price is. If you are already going to trade, you also want to make a profit. You can make a technical analysis to see what the best buy or sell moment is.

On CoinMarketCap you can easily follow the price of AXS and you will see that it has gone from $4.5 to $68 within a month, July 2021. At the time of writing, August 2021, it seems like a good investment. As long as the popularity of this game continues, the price will probably not fall. However, before investing, do your own research.

What is the price of the SLP token?

The SLP token has also undergone an interesting and fierce price development. Until May 2021, the price was around $0.08, but in May the preliminary ATH (all time high) was reached at $0.3642. In August, the price has halved again to $ 0.18. Again, it is important to do your own research.

Where can you buy these two tokens?

The SLP token is  unfortunately not yet for sale on Bitvavo . You can buy the SLP token at  Binance  , the largest crypto exchange in the world. Furthermore, almost every CEX has them on their list. There are also many liquidity pools on DEXs where you can find an AXS pair or SLP pair. The AXS token can be found on more exchanges than the SLP token. Since August 2021 you can now also buy AXS on Bitvavo . Enter below how much AXS you want to buy on Bitvavo.

It is recommended to buy these tokens on a CEX like Binance , rather than a DEX like Uniswap . Especially if you are just starting to trade. On a DEX you have to go through several steps to be able to buy a coin. This increases the risk that something will go wrong and you will lose your money.

How can you store these tokens?

You have several options to store these tokens. The safest way is to store them on a hard wallet , also known as a cold wallet. With a hard wallet, such as the Ledger X or S and the Trezor, you are protected against internet hacks.

You can also leave the tokens on a CEX like Binance. However, this does not protect you against a hack of the stock market. These wallets are also called hot wallets.

The roadmap of Axie Infinity

Since 2018, Axie Infinity has already accomplished quite a bit. Still, they keep moving forward with new goals for their project. That is good to see and confirms that they are not just resting on their laurels.

A strike dashboard is planned for 2021 and we see releases of a ‘card battle game’ and a ‘land game play’.

After a slow start for Axie Infinity in the blockchain gaming market, this game has completely exploded in 2021. The number of users has increased enormously and the turnover and profit have gone completely over the top . As a result, the price of both the AXS token and the SLP token have also risen sharply, and have gone bankrupt quite a few times.

Blockchain gaming has turned the gaming world upside down , and this seems like just the beginning. The concept of P2E is new and is well received. The fact that you own the NFTs in the game yourself is also innovative. You are much more in control than traditional games. It is only a matter of time before blockchain gaming will catch on with the general public. What will happen to the prices of these games, and especially Axie Infinity, is exciting.