Arweave is the latest technology to store data without it being changed or deleted in the future. In this way, Arweave’s protocol communicates not only remotely, but also over time. Due to their decentralized autonomy, all data remains on the network that users can consult forever.

The impact of the internet on our lives is unprecedented, enabling instant connection to people from all over the world at the touch of a button. But the internet does not make it possible to communicate over time. Humans have always tried to communicate with either the future or the past. Think of cavemen who communicated through cave drawings, but also a library that takes us back to the written texts of decades ago.

The beginning of the internet is also seen as the web 1.0. Originally it was intended to be an open network where everyone had equal power. In practice, we see that large central players such as Google and Facebook dominate the infrastructure of the internet. As a result, these open networks have turned into a place where information and freedom are limited by, among other things, censorship and conflicts of interest.

With the advent of the internet, we have the technology to digitize this history in a permanent decentralized network that connects our past with the future. Imagine being able to consult all information from the past, from books to rock paintings. What impact would that have on humanity and how would it help us understand and learn from the past? We can use this information to create a better future. Arweave makes a fundamental difference in how data is stored in the long term.

We currently store information in the Cloud or on a USB stick, but what are the options if we really want to store this data for a long time? What if you want to keep something for 20 years or even 200 years? We currently make massive use of the Cloud to store our data, as we assume it will last forever. However, this is not the case and we have to take into account the fact that this data can be lost one day. Suppose you have confidential documents on your USB stick, but within 30 years the new computer software will no longer support the file type. Then you cannot open this document and you will lose this valuable information.

In practice, an enormous amount of information is lost over the years. Let’s take a look at MySpace’s popular platform. Here new music was released and shared with a worldwide network. It was also thought that this data would be immortalized on the platform. Less than a decade later, MySpace went offline and all on-chain data, including music and portrait rights, was lost.

This may also include other confidential information such as medical records, DNA summaries, police reports and the like. 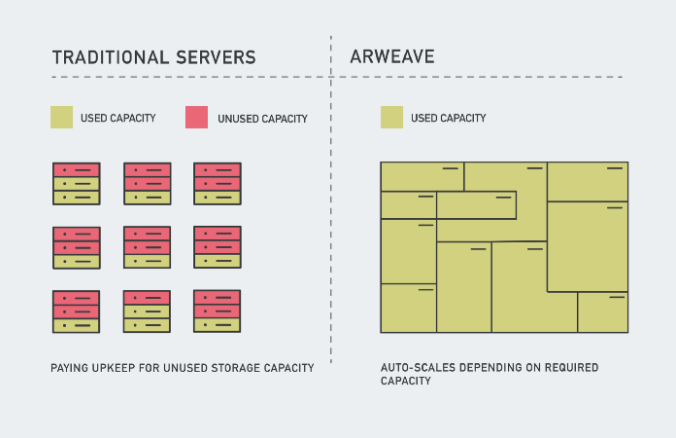 We currently pay for the storage of our data. This can be done with a range of different parties. To keep a website online, for example, you pay a monthly or annual fee with a web host. And for your iPhone you also pay a monthly fee to store your data in their iCloud.

Every company that works from the Cloud pays a fee so that all company documentation is not lost. But what if we forget to pay this contribution? When will all this data be deleted? These companies will not store this data indefinitely. On the one hand because it is no longer relevant to them, on the other because it takes data on their server.

This data can be invaluable, even decades later. For example, you can add medical records of patients worldwide to the network in order to subsequently conduct research on a specific condition on a global scale. Besides the fact that this research can be conducted on a global scale, one can also compare results from the past. In this way, you can not only discover differences between countries and/or continents, but you can also discover differences between, for example, that particular condition in the 1950s and what the state of affairs is in the year 2500. This information is then recorded in the protocol and will continue to exist in the future for further research.

We think all our photos on social media are captured for eternity. Although this data, such as photos, is visible to the entire network, it is wrong to think that your photos will still be online on Facebook within a few decades. These inactive profiles will be deleted and will be lost along with all associated data.

Arweave introduces a new type of structure for storing and processing data, called block weave. It provides large-scale on-chain data storage in a fully decentralized network. This network allows users to store all kinds of data, decentralized applications and web pages on the Internet. This in a permanent way. This is why they speak of permaweb, where all data is immortalized on the Arweave platform.

Currently, search engines such as Google may decide to take your data offline or it may happen that your website disappears from the web due to a technical error. With the blockweave, all information is immediately stored permanently. There is no central policy and/or control. This is done by all nodes in the network.

How does block weave work?

Block weave is a variant of the blockchain that we already know. The standard blockchain uses different ‘blocks’ to store data that can no longer be changed. As a result, this information remains unchanged over time. When new information is added, previous information must be confirmed and approved by the community before any information can be added to this database. 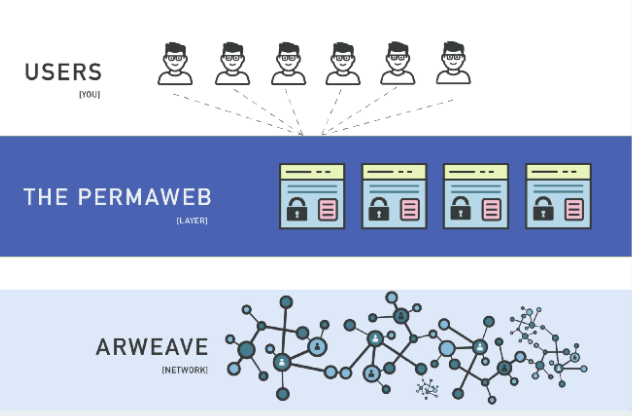 Without miners, this storage of data is therefore not possible, but how are these paid? Arwaeve uses a fee structure where users pay once to store information forever, rather than being tied to a monthly or annual subscription. Their slogan therefore reads as follows: “ Pay once, store forever! †

The prices for storing data become cheaper over the years. Where we paid sky-high costs decades ago, you now only pay a few euros for an annual subscription. Arweave has its own system where all costs incurred to host the network go into an endowment fund. The interest from this fund is used to pay the storage costs of the server. 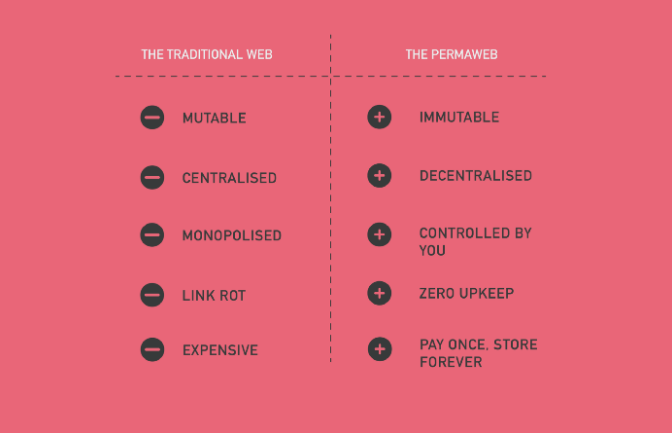 The permaweb is the new technology that characterizes Arweave. It is a combination of blockweave and the innovative incentive system for the miners. They even describe Permaweb as follows:

“A global web, managed by the community, that anyone can contribute to or get paid to maintain. The permaweb looks just like the normal web, but all of its content — from images to entire web apps — is permanent, quickly retrieved, and decentralized — forever . Just as the first web connected people over great distances, the permaweb connects people over extremely long periods of time ”

Various dates of any kind can be immortalized on the blockweave. This applies to both individuals and companies. Some examples of this are:

Arweave uses a combination of the well-known Proof-of-Work and the new Proof-of-Access. In a Proof-of-Work consensus mechanism, the network relies on the preceding block to generate each subsequent block. This is time consuming and as the block grows, it will slow down. The PoA algorithm takes data from a randomly chosen previous block. As a result, the entire chain does not have to be consulted, but only one block. Miners can therefore store earlier blocks, which forms a blockweave structure.

Arweave’s protocol uses Wildfire. This is a data sharing system, where nodes are ranked according to the speed with which they each respond to requests from other nodes in the network. Those who do not share information quickly enough can be permanently blacklisted by the network. This structure is aimed at efficiency and driving fast data transfer between all nodes of the network. 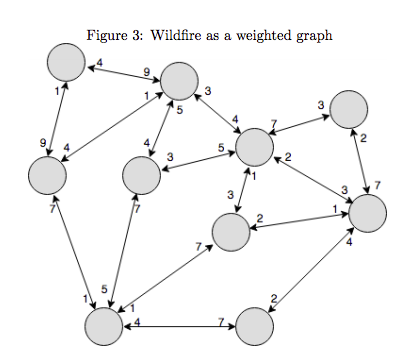 Blockshadow is a data management system where transactions are partially decoupled from the entire block in the network. In doing so, they only send ‘a shadow’ of it, so that the other nodes in turn can recreate the entire block. This reduces the size of the transaction, making it faster.

Participating in the network to immortalize data yourself is based on the native token $AR. All data posted on the permaweb must be paid for with the AR token. It is also in this currency that miners are compensated for their work.

Arweave has a total token supply of 66 million AR tokens. Of this, 55 million was released in 2018 with the genesis of the Genesis block. The remaining 11 million will be released over time. There are currently 43 million tokens in circulation. As a native token, $AR is the means of payment to access the network.

While Google and Facebook have the power from a central policy to refuse or censor certain content, this is done at Arweave throughout the network. With each addition of data, the entire network is enabled to accept or reject this new data.

The protocol has a blacklist system, where each node has the authority to reject the content of the data. Content rejected by more than half of the network will not be included by the nodes in the Arweave protocol.

Arweave was originally created in 2017 in London under the name Archain. The protocol changed its name to Arweave in 2018. It was originated by Sam Williams, a PhD student at the University of Kent where he studied computer science. Besides CEO and founder, Sam is also a technical advisor and mentor at Techstarts, an international company that helps entrepreneurs on their way to success.

Arwaeve was thus originally a central company, but decided in January 2020 to become a full DAO, a Decentralized Autonomous Organization. Arweave is no longer controlled by the team, but by the entire community. Together they determine the further developments of the network and the ecosystem.

The principle of on-chain data is not new. In this digital age, almost all data and information exists online. This can range from bank details to a health insurance fund and even your home’s mortgage. You can request all data digitally via a simple email, regardless of where you are in the world.

But retrieving data from 10 years ago is already becoming more difficult. Because every company uses a separate Cloud and stores the data only for a certain period of time, it becomes almost impossible to use data from both the past and to use this data in the distant future.

Arweave aims to be a global decentralized on-chain data network where this data is immutable and users can access this information at any time, regardless of location and time. By means of the decentralized network it is impossible for a central administration to take a certain platform or server offline. As a result, Arweave stores all information for eternity.