Do you already store files in the cloud? Chances that you already do are very big! Sure mayble in a cloud, at a central service such as Google or Microsoft. However, nowadays it is possible to store your files on the blockchain cloud. Ankr, for example, is one such project that makes it possible to use the blockchain as cloud storage.

In this article, we will tell you what Ankr is, how it works, and where you can buy the token of the same name, ANKR. But first, watch this video below.

The traditional cloud computing industry provides a lot of money for companies like Amazon and Google and the team behind Ankr believes there should be a way for researchers, students and startups to access affordable cloud computing in a decentralized way.

Ankr claims to have 100% availability and reliability with an affordable and transparent pricing model, saving users up to 80% compared to other public cloud providers. In addition to these benefits, users can take advantage of automated upgrades, maintenance, monitoring and logging for all blockchain protocols.

The team behind Ankr

The team is very young and the majority of the team members have almost no experience and are fresh out of school. Only the CTO has a resume that stands out with 10 years of experience in software engineering at Amazon, the rest of the team seems development-oriented but inexperienced with implementing a blockchain ecosystem.

These are Ankr’s advisors:

How does Ankr work?

Let’s take a look at the different parts of the Ankr ecosystem to understand how Ankr works. 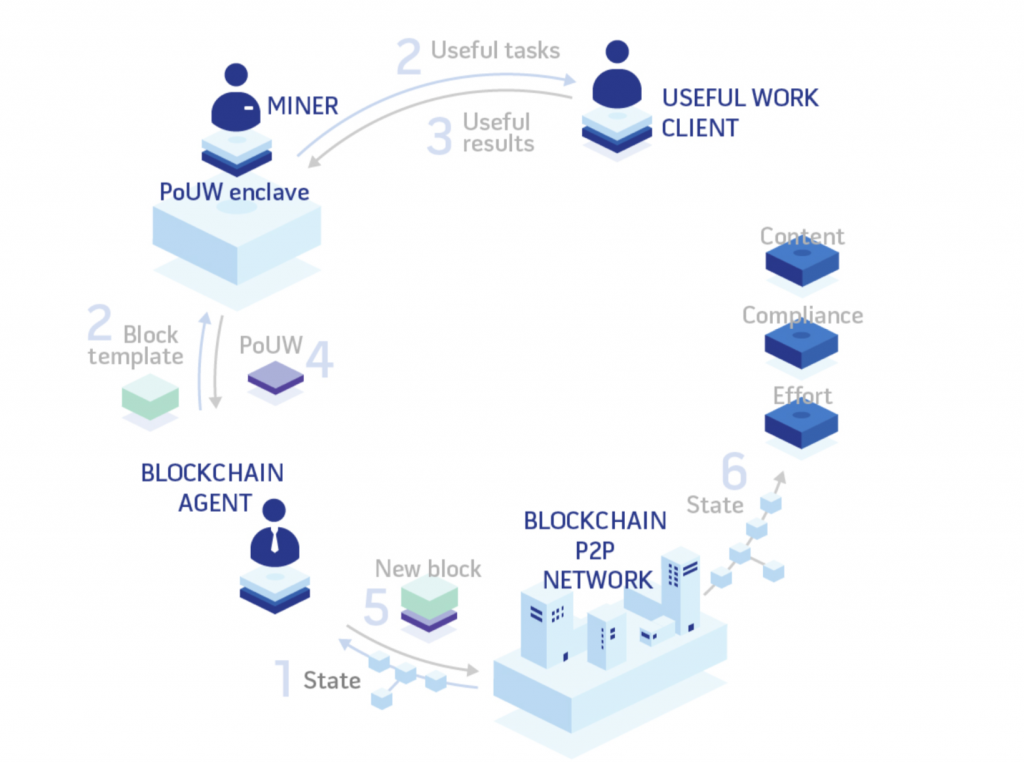 Ankr wants to rely on the method of the Proof of Useful Work (PoUW). To implement this consensus algorithm, Ankr engineers decided to take advantage of the SGX technology present in Intel Core processors.

The team justifies its choice to use PoUW over traditional PoW with the fact that the memory enclaves provided by SGX functions enable a TEE (Trusted Execution Environment). The TEE is an isolated area on the main processor of a device that is separate from the main operating system. This guarantees that data is stored, processed and protected in a trusted environment.

DCC makes it possible to process a large number of tasks using decentralized and distributed nodes. This form of cloud computing is based on parallelization, especially at the CPU level (simultaneous processing of information).

A reputation system will be implemented that will use a multi-heuristic algorithm. This is a computer method that quickly provides a feasible solution to a difficult optimization problem.

The first layer will be the blockchain. This layer will consist of the low-level architecture functionalities as well as the RPC (Remote Procedure Call, client-server model) and Dapp (stand-alone application without central entity) methods related to this first layer.

The second layer will provide the functions. Think of the miners, as well as the PoUW consensus algorithm.

Finally, the last layer is the distributed cloud engine. This is the heart of the Ankr service, as it collects the client requests and sends them to the mining layer. The client will be able to use various resource request engines to optimize its processing.

To get a better overview of the Ankr project, we can look at the advantages of Ankr. It will also make it easier, after you weigh the pros against the cons, to decide whether Ankr is a wise investment in your opinion.

Here are the main advantages of Ankr:

Of course, there are also some drawbacks to this project. That applies to every blockchain project. It’s up to you to weigh the cons against the pros.

These are the disadvantages of Ankr that we were able to find:

Lots of competition for Ankr

You could just see from the downsides of this project that there are a large number of competitors. And especially the central cloud solutions will be the biggest obstacle for Ankr. Still, Ankr does have an advantage over them.

These large grid giants have to maintain heavy infrastructures and cannot lower their prices much further. In addition, these three companies are subject to US law (Freedom Act, Cloud Act, etc.), which prevents European consumers from simply using these services.

So we can see that Ankr can make a place for itself in this segment. However, to succeed, Ankr will also have to compete with the blockchain sector, as several projects have been launched in this sector. Sparkster, iExec or Oyster Pearl (and more, as mentioned earlier) represent different visions of this decentralized cloud on a blockchain environment in their own way.

How do I buy ANKR?

If you want to buy ANKR, you can do this at most crypto exchanges. Think for example of Binance or Bitvavo. These crypto exchanges offer the best security and highest liquidity. Within a few clicks, you have ANKR tokens in your possession.

In addition, these are also proven crypto exchanges when it comes to security. You can buy ANKR tokens here without worrying about your safety. There are several other crypto exchanges where things have unfortunately gone wrong in the past. So always think carefully before you decide to buy crypto somewhere.

It is also possible to buy ANKR on a decentralized exchange, such as Uniswap or PancakeSwap. As we said before, the chances of a purchase going wrong are much higher on a DEX. You have to go through many more steps, which are difficult for some to perform. That is why it is best to choose Bitvavo.

How can I keep ANKR?

If you want to store ANKR in a wallet, you can do this in most cases by using the wallet of the crypto exchange you use for your purchase. Think, for example, of the wallet of Binance or Bitvavo.

It is also possible to store ANKR in a MetaMask wallet. Since the ANKR tokens are ERC-20 tokens, you can store them in almost any wallet. This is because Ethereum projects are the most common projects. So you really never have to worry about this.

However, storing your tokens and coins in a software wallet (also called a hot wallet) is not the best and safest way. This is because these wallets are connected to the internet at all times. This means that there is always a possibility that hackers can get into the wallet. And that would mean they also have the chance to steal your ANKR tokens.

Would you like to keep your ANKR in a safe way? Then it is better to use a hardware wallet, which is also known as a cold wallet. These wallets are many times more secure than a hot wallet , because they can be disconnected from the internet. It is in fact a USB stick, which you can physically keep. By storing the hardware wallet in a safe, your ANKR tokens are protected against hackers.

In that case, you must of course ensure that you do not lose your hardware wallet. Ledger and Trezor are the best-known and most used hardware wallets, which we can also recommend to you.

Is it smart to buy ANKR?

There are two different points of view from which to answer this question: the short-term investor’s point of view and the long-term investor.

From a short-term investor’s point of view, it can be a smart investment because there is a chance that the token will appreciate in value in the short term.

However, for a long-term investor, the risk is greater as Ankr will have to face fierce competition and strike a good balance in terms of innovation of its technologies.

However, it is important to do good research into this project yourself before investing in it, and not just listen to others. You can do this through fundamental analysis or a technical analysis. This way you can determine for yourself whether it is a good time to step in, or whether it is too late to do so. Of course, you want to be able to buy ANKR for the best price, and then sell it for the best price.

The rate of Ankr (ANKR)

According to data available on CoinMarketcap, Ankr grew very strongly in the second quarter of 2021. This was not surprising, because at the same time, the value of many other cryptocurrencies also rose. In January 2021, Ankr still had an average value of $0.0097, while the value subsequently experienced an all-time high of $0.1943.

However, the price of ANKR tokens fluctuates a lot. The value has fallen sharply after the ATH to $0.09. As a result, it can happen that it is smart to buy these tokens at one time, and it is anything but wise to do so at another time.

It is best to keep a close eye on the live price for this.