Are you into gaming and always wanted to explore your own universe? Alien Worlds is an interactive game in which you can shape the entire universe by means of NFTs as a player. Blockchain technology has more and more in-game implementations that are successfully received by various games. You are no longer dependent on the rules of the game, just you create your own game. Sounds good right, read and learn more below.

What is Alien Worlds (TLM)

In traditional games, you are dependent on the restrictions that come with the design of a game. You will never really be able to determine the rules of the game or shape the development of a game yourself. These restrictions are all documented in the design source code. In addition, any visual creations associated with the game are never wholly owned by you. In a traditional game, you can give your avatar a unique outfit, or buy a limited edition weapon, but this is never owned by you. When the game gets a new update, designers can just take this asset from you. This is a major stumbling block in the traditional game industry and therefore the arrival of NFTs and the blockchain is an important update for this multi-million dollar industry.

Alien Worlds is an interactive NFT game in the DeFi ecosystem built interoperably on the blockchain of Ethereum, Binance Smart Chain and WAX. With the further development of blockchain technology, we see that interoperability is increasingly becoming the norm, with Alien Worlds being no exception. This cross-chain is made possible through the use of oracles.

How does Alien Worlds work?

When signing up, players can compose their avatar. This is done on the basis of physical characteristics and gender. Players can then choose which planet to enter to explore Trilium (TLM). The universe of Alien Worlds has 7 different plants, including the Binance planet. Each planet has its own specifications, so you have a different interest rate on your Trilium on each planet, but it is not equally easy to mine everywhere.

Upon entering the chosen planet, players can choose a particular piece of land to start mining here in search of TML tokens. This mining process is done on the basis of NFTs that you have in your possession. There are different types of NFTs, each with a different mining speed. For example, a traditional shovel is the cheapest way, but also the slowest. The purchase of minted NFTs is done with the native token, allowing for a high degree of circulation on the platform. After purchase, these NFTs are stored in their own decentralized wallet.

With the virtual mining of Trilium, the players get more autonomy within the game and earn extra privileges. For example, it is possible to buy a piece of land, after which other players will come to mine. In this scenario, part of the proceeds is paid out to the landowner. The goal is therefore to collect as many TLM tokens as possible. With the governance feature, players also control the DAOs of the different planets.

All the different plants in the Alien Worlds universe all act as individual DAOs. These are Decentralized Autonomous Organizations that are managed on the basis of smart contracts. By using the native token Trilium (TLM), users can control and shape the organization to a certain extent without the need for a central organization. DAOs are a transparent way of operating in a decentralized environment, in which users of these DAOs can also make proposals or possibly call for changes to certain matters.

Before receiving voting rights, users must discontinue their Trilium. In return, they will receive planetary DAO tokens that will allow them to vote in Alien Worlds protocol.

There is a set amount of 5 billion Trilium tokens distributed between the Ethereum blockchain and the WAX ​​blockchain. Because the game is interoperable between three different blockchains, it is necessary that they communicate with each other and can also exchange the necessary information. That’s why it uses cross-chain oracles.

Blockchain oracles are smart contracts that provide additional information, either internally or externally. In this way, they are, as it were, a bridge between various decentralized applications (dApps) and in-game applications on blockchain technology.

When a player decides to transfer some of their digital currency from one blockchain to another blockchain, it is imperative that both parties process this information accurately. For example, the amount will be subtracted on one blockchain and added to the other, so the total maximum amount will always be fixed.

Despite the development and in-game applications of NFTs are still relatively new, we can no longer imagine a world without these NFTs. Where these often have a purely artistic value and rather serve as a collector’s item, at Alien Worlds these nonfungible tokens serve as a user object to actively search for Trilium (TLM). The tools used in the mining process are all unique NFTs in the platform, which can also be traded. For example, you can buy new NFTs with TLM tokens, or you can sell an NFT that you have mined yourself because you already have it or it does not meet your expectations.

Each item has some form of rarity. This keeps players on their toes and also challenges them to be as committed to the game as possible. Each player has an equal chance of mining these rare NFTs, each with their corresponding value. A very rare object is logically worth much more than a regular NFTs. The project has divided these into 6 categories, from regular to very rare:

As with Pokemon cards, each NFT also has a certain sheen about this token. This emphasizes the degree of rarity and value. These are also categorized:

All NFTs start as Stone and can be upgraded by the user. This happens as they progress through the game and show more activity.

The monetization of digital assets is an important point in the development of NFTs and especially in the game industry. Players buy an asset with their native token and this is their property. No one can therefore claim it back under any circumstances. There is an extensive range of different materials that you as a player can purchase and also trade. The goal is therefore to have an object that is as efficient as possible that can mine very quickly in a short time. The more advanced your tools, the more likely you will find a true treasure.

The deflationary native token Trilium (TLM) is the foundation of all of Alien Worlds. The goal of the entire interactive token is therefore to mine and own as much Trilium (TLM) as possible. There is a committed amount of 5 billion with an inflation rate of 9% in the first year. The following year, this inflation will be 7.64% and will continue to fall in the future.

TLM is both an ERC20, BEP20 and WAX token that functions interoperably across the blockchains and actively works on an ever-expanding network. Currently, the team focuses on English-speaking countries, as well as China, Russia, Japan and Turkey. In the future, they would like to expand this list to include countries such as the Philippines and India.

Players can make their Trilium available in the decentralized environment of WAX to stop it. This gives players extra returns on their Trilium, after which they can use this extra token to continue mining TLM in the game with, for example, better tools. The added value here is not only receiving additional TLM tokens but also actively using them to upgrade their materials and thus further profile themselves in this simulated universe.

New protocols are increasingly aware that whales can influence the operation of their project. It happens more often that they buy a large part to pump the price and then sell their position en masse, causing the price to plummet. Alien Worlds is responding to this and wants to prevent certain players from unwantedly taking the upper hand of the game. After staking, you can also remove your assets from this staking pool, but this will take two days. This was done deliberately to prevent whales from exerting too much power.

Have you amassed quite a bit of Trilium? Then it is even possible to generate a form of passive income in addition to the strike process. It is possible to buy a specific piece of land on any planet. Players can then mine on your plot, earning you a commission on all Trilium and NFTs that have been mined. By default, this is set at 20%.

Owners can make their land more attractive by reducing this percentage, but can also ‘fertilize’ their land with so-called Landowner-offered NFTs. As Alien Worlds gets more players, there will be less and less land available to buy, with early adopters seeing their opportunity to passively accumulate TLM tokens in the long run.

Alien Worlds was the 17th project added to the Binance Launchpad. This is where new projects are launched to the general public where users of Binance can stake tokens in exchange for the native token of the new protocol.

On April 12, 2021, Binance launched Alien Worlds’ project on their platform. By staking BNB or USD, you were paid the very first Trilium through Binance in return. In total, more than 10 million BNB tokens were staked with an AYP of 7.57%. It is therefore not surprising that Binance has over 95% of Alien Worlds trading volume on their exchange. The listening through Binance Launchpad was 2.92 of the total supply of the tokens. 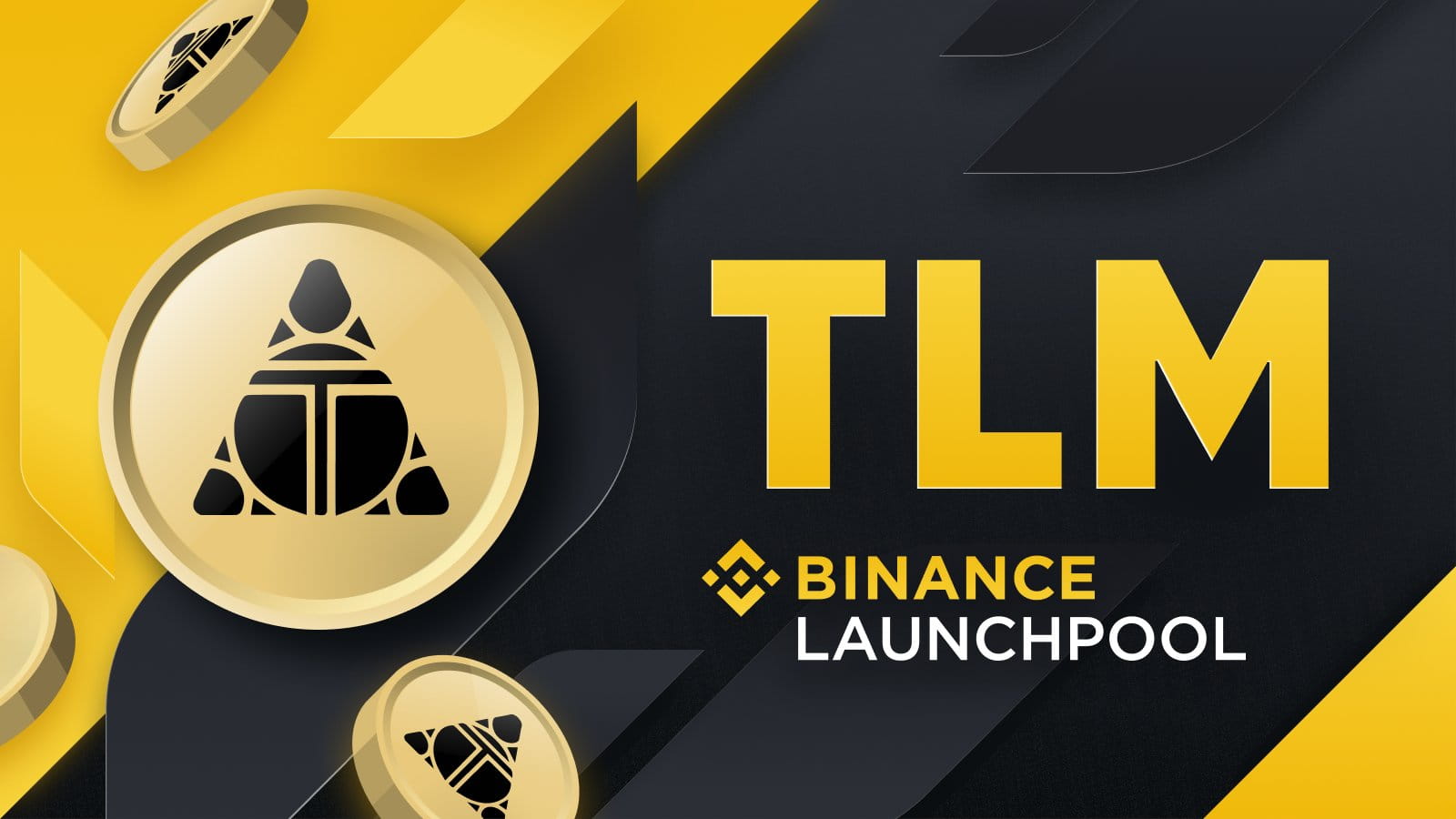 More and more games are discovering the benefits of blockchain technology. One of the last new competitors of the still young protocol of Alien Worlds is MyNeighborAlice. The big difference with Alice is that it is still a prototype, while Alien Worlds is an already working product where players can start using the game right away.

Alien Worlds wants to promote their unique game through other games. They are therefore looking at the possibility of implementation from other games and whether this can add value to the current structure. In addition, they are looking at whether it is possible to update the User Interface (UI) to prioritize user-friendliness and quality.

In addition to the current offering, expansion is certainly on their roadmap. With this expansion, they are also looking at whether they can enable interoperability between these digital assets. Would it be possible to use these NFTs in different games? These select NFT collectibles will also gain more value in the platform in the future.

Increasingly, the use of NFTs is taking on a new dimension through the tangible use case it provides through in-game applications. Alien World in its current structure is a simulated economy where players compete against each other to gain land as well as mine NFTs and Trilium. In doing so, it uses blockchain technology for in-game applications but also takes advantage of the ongoing NFT trend where the possibilities are endless.

Since the start of the protocol on April 7, 2021, Alien Worlds already has a total market cap of $282 million and if the protocol manages to live up to expectations, and continues to renew itself, it could just be a promising year for Alien. worlds.