The current advertising market and in particular the online media have undergone a major change in recent years. Positions are shifting, and as a result, for example, online advertising has surpassed TV advertising. Traditional broadcasters are getting smaller and instead you get so-called OTT (over the top) providers. These are the big boys like Netflix, Amazon, Disney and you name it. This trend will most likely only continue to grow. As a result, online advertising now accounts for 40% of the entire market. Every deal that is made also includes one or more intermediaries. These intermediaries all charge a fee for their services to connect publishers and advertisers. This whole trade is also not transparent. This, in turn, makes it difficult to monitor the success of an ad campaign. Almost everyone also has an ad blocker installed. Adex Network aims to address and resolve these issues.

You probably already get it, in this blog we are going to talk about Adex Network and the ADX token. I am going to explain to you what exactly Adex Network is and how it works. We’re also going to take a behind-the-scenes look at this project ‘s team and take a closer look at the ADX price. I will also tell you where to buy the ADX token.

Please note: please note that the text below about ‘Adex Network (ADX)’ as well as the explanation thereof should in no way be construed as advice. The choice for whether and in what way you want to trade (crypto) and which choices you make in terms of investment is up to you and you alone. We are not financial advisors.

Here you can first watch a video showing how Adex Network works.

What is Adex Network?

Adex Network is a decentralized advertising platform and exchange . Adex stands for ‘advertising exchange’. They want to improve the digital advertising ecosystem, with a blockchain – based network. In this way they want to connect publishers and advertisers in a more efficient way. Adex is open source and built on the  Ethereum  blockchain. By using the blockchain technology, they want to improve privacy, transparency and security for viewers, publishers and advertisers. In addition, fraud is reduced and budgets improved.

In 2017 they started as a decentralized advertising fair. Meanwhile, they are a full protocol for trading advertising space and time. In addition, they also take care of the subsequent verification and proof of ad serving.

The network functions via micropayments on Ethereum. The OUTPACE 2nd layer payment channel is used for this. The native ADX token is used for staking. So it is also a DeFi platform. Since the platform went live in 2020, 12,000 users have been registered. In the same time, more than 1 billion micropayments have also been processed. They also claim to be the largest payment channel network on Ethereum.

Adex offers a platform where advertisers and online publishers can meet and negotiate their contracts. However, they are also there for the internet user. There is a user portal where you can indicate which advertisements you want to see. In addition, you are offered the possibility to manage your profile data and your privacy.

How does Adex Network work?

The Adex Network allows trading in advertising space or time . In addition, they verify and prove that the ads actually took place. In this way, the protocol combines traditional P2P, cryptographic and blockchain technology.

The Adex Network works with a solution, looking at the problem from three sides. The publisher, the advertiser and the user all get their money’s worth. The problem is always looked at and approached from a different angle.

The publishers own and manage the websites that users visit. They host ads and get paid for it. At the same time, however, they also want control over which ads are shown on their site. In this, Adex helps to maximize advertising revenue. At the same time, they minimize the negative impact ads have on users.

All ads created through Adex are verified. The authenticity of every impression and every click is established. In addition, unfairly generated clicks are also penalized. This ensures that the value of ‘real’ impressions goes up and honest publishers earn more.

Publishers have control over which ads appear on their site. Through the UI of their dApp they can turn advertisements on or off if they are not satisfied with the content. This is exactly how it works for advertisers. This is quite a unique situation in the advertising world, where you are normally presented with a bundle of ads. Then if you want to get a specific ad out of it, you have to negotiate the whole package, with a high chance that you will lose several sites or advertisers.

The advertisers often have their ads spread over hundreds, thousands or even more sites every day. With the Adex network, for the first time, they gain unparalleled control over how, where and when their ads go live.

To stay ahead of crypto volatility, payments between the publishers and advertisers are made via the DAI stablecoin.

Users can make choices about which advertisements they want to see via a portal. This can lead to a situation where the user sees advertisements that he is interested in, or at least does not avoid. This increases the chance that users will install fewer ad blockers.

This is shown schematically in the image below. 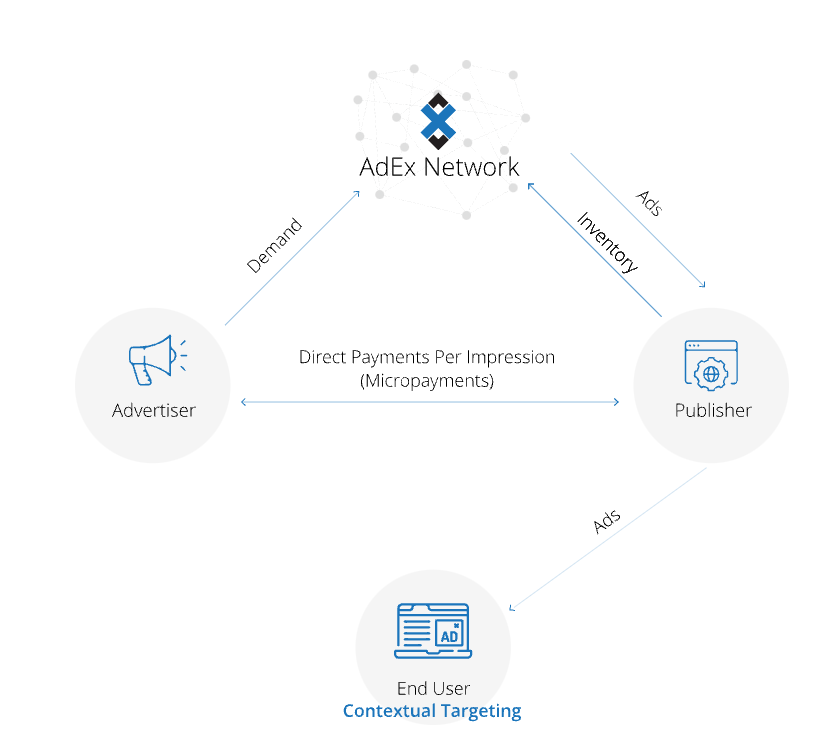 The Adex protocol is designed in such a way that it is actually invisible to the end user. In addition, internet surfing is being improved. However, under the hood you can find a complex system of different software components. However, that would be too complicated to explain, so I’m going to explain that in a more accessible and understandable way. However, if you are a techie and interested in discovering the technical aspects of the network, you can do so on Github .

Which are the 6 components on which the Adex network runs?

Below you can see how this all works schematically.

Who is on the Adex Network team?

The team already started working on the idea for this project in 2016. In June 2017, 40,000 ETH was raised, which was worth a staggering $12 million at the time. The team was quite unknown in the crypto world, but we are now four years further, and they also have four years more experience. And more importantly, the project is running!

Their website lists fourteen other members on the team.

What is the ADX Token?

The ADX token is an ERC20 token. During the last upgrade of the network, the token also got a little perk under the hood. It is now completely ready for DeFi and yield farming. In addition to new staking rewards, you can now also take out flash loans with the ADX token. The gas costs are now also lower with the new token. With the addition of flash loans, they hope for new uses for the token, such as automatic arbitration through various exchanges.

The flash loans are loans where you also repay the borrowed amount at the end of the transaction. If you don’t repay the loan, nothing happens, and the whole planned deal you wanted to execute just doesn’t happen. With flash loans, many DEXs are hacked, often for very high amounts.

The chart below shows the original token distribution. What’s good to see is that the team only gets a small percentage. That usually means they stay involved in the project. Since they’ve been working on it since 2016, it looks good. 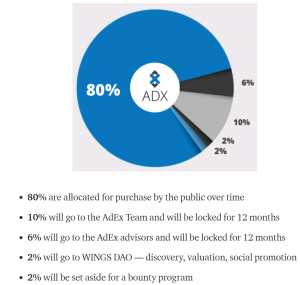 What is the price of the ADX token?

If you want to invest in the ADX token, a good start is to know what the price is. If you are already going to trade, you also want to make a profit. You can make a technical analysis to see what the best buy or sell moment is.

At  CoinMarketCap  , it is just within the top 500 in place 492. I think this coin has a good prospect, especially if Bitcoin continues to rise in 2021. I think it could experience a good price development. If you want to invest in this coin, it is important to do your own research.

Where can you buy the ADX token?

The ADX token is for sale on Bitvavo  . Bitvavo has included this coin in its offering at the beginning of September 2021. Most leading CEXs also offer this coin, such as  Binance  or Gate.io. There are also many liquidity pools on DEXs like Uniswap where you can find an ADX pair. If you live in the Netherlands or Belgium, Bitvavo is a very convenient option. You can click on the widget below and you can immediately buy the ADX token.

What is the best way to store the ADX token?

You can of course leave your ADX token on the exchange where you bought the token. However, now you do not have access to your private keys. The private keys of an exchange remain in the hands of the exchange itself. The danger of a hacked exchange is always there and then you have a chance that you will lose your coins. These wallets on an exchange are also called hot wallets .