Play to earn (P2E) games have seen tremendous growth in 2021 and have become quite popular. The great thing is that there are already quite a few of these blockchain technology-based games that can actually be played. Several promising projects will not be released until 2022. Of the games that can already be played, there are mainly many card games where you have to wait your turn. However, there was not yet a multi-player online battle arena (MOBA) game. This one is here now, and the first in this genre is Thetan Arena.

Please note: please note that the text below about ‘Thetan Arena (THG)’ as well as the explanation thereof should in no way be taken as advice. The choice for whether and in what way you want to trade (crypto) and which choices you make in terms of investment is up to you and you alone. We are not financial advisors.

Here you can first watch a video of the beginner’s guide to Thetan Arena. This guide takes you from logging into the game to playing the first game.

What is Thetan Arena?

Thetan Arena is an e-sports game in the form of a MOBA or multi-player online battle arena and battle-royale P2E game that runs on the Kardiachain. The popular My Defi Pet game also runs on this blockchain . Thetan Arena was developed by the Kardiachain blockchain and the well-known Vietnamese game studio Wolffun. These are known for the Tank Raid Online and Heroes’ Strike, which together have no less than 10 million unique downloads. They have even made it to the “Google Play Editors’ Choice”. Thetan Arena is built with Heroes’ Strike as the basic idea.

The game is developed in 2D mode and players have a top-down view. The characters in the game are relatively minimalistic and have a bit of a retro look. Unique to Thetan Arena is that they are the first MOBA game to run on a blockchain. The game is free to start with and with the build up there is a good chance that most non-crypto players are likely to switch and become crypto players.

The game is extremely suitable for streamers and content creators. This can ensure that there are not only players, but also viewers. In due time, it is quite possible that the viewers will eventually become players.

An interesting aspect is how Thetan Arena aims to involve the community in the game. This of course takes the form of a DAO (decentralized autonomous organization). However, what they also use is a so-called ‘Custom Map’, where players can make modifications and changes to the original version of the game. The game will be set up by Wolffun for the next ten years, but the community will then be allowed to make and implement their own changes. For example, custom modes, maps or cosmetics can be added as in-game items that can also be earned. For example, these in-game items can be sold. The possibilities are almost endless this way. This transformation to a DAO will be gradual.

The next video gives an impression of the game, this is DeathMatch.

How does Thetan Heroes work?

Thetan Arena works as a multi-player game, where you can participate alone or with a team. There is fighting amongst each other and with your skills you can also earn money . If you are new to this game, you will get one level 1 hero (hero) for free, ‘Raidon’. These free heroes cannot be sold in the marketplace. Heroes with other, higher skills that are not free can be found in the Thetan Box. There are three different groups of heroes in the game,  Tank , Assassin  and  Marksman .

When you start the game, you have a level 1 hero at your disposal, but it can be upgraded to level 10 with in-game items.

There are three different rarity levels. Common Hero, Epic Hero and Legendary Hero . There are two ways to determine the rarity, the base rarity and the rarity of his skin. There are also three levels for skins, Default Skin, Rare Skin , and Mythical Skin . The rarer the skin, the more visual effects and bonuses in battle can be earned with it.

These heroes are in the front rows during battles, making sure other team members don’t get injured. Their basic abilities are a high ‘Health Point’, a normal ‘Attack Damage’ and a slow ‘Speed’.

There are different types of Tank heroes. Veinka, Errant Ghost, Breaker, Lucy Muffy, Meiko or Kong Key. Each has different characteristics and a different background.

The Assassins are the deadly and silent assassins who go into battle and take out their target in single combat. Then they disappear again unnoticed. Their basic abilities are a low ‘Health Point’, high ‘Attack Damage’ and a high ‘Speed’.

The different types of assasins are Raidon, Serp, Rei, Mortal, El Dragon, Velvet, Mary and Taekwon. Again, each Assassin has different characteristics and a different background.

Marksman are the ones who can do the most damage during combat and keep the DPS (damage per second) high. Their basic abilities are a normal ‘Health Point’, a high ‘Attack Danage’ and a normal ‘Speed’.

During the battles, three different types of tokens can be won as rewards.

There are different types of battle options in Thetan Arena.

After each battle, gTHC are distributed to the winners, but the losers also receive a small compensation. In the event of an equal number of points, both teams receive gTHC. Then, in addition to the game bonuses, there are also bonuses that depend on skills and skins.

There are also special events, such as Campaign (PvE), Collection (PvE) (PvP), a Leaderboard Competition and War (PvP). There is also an extensive ranking with 11 levels and a leaderboard. There are seasons that last three months, during such a season you can reach one of 60 different levels and you can rise in the rankings. At the start of each new season, everyone starts from scratch. Players can also set up a guild that can fight against each other.

Thetan Arena offers three different ways to participate, ‘Free to Play’, ‘Play to Earn’ and Free to Earn’ . Thetan Boxes and THC can then be earned. The boxes come in varying rarities and are dropped during the game or can be purchased. 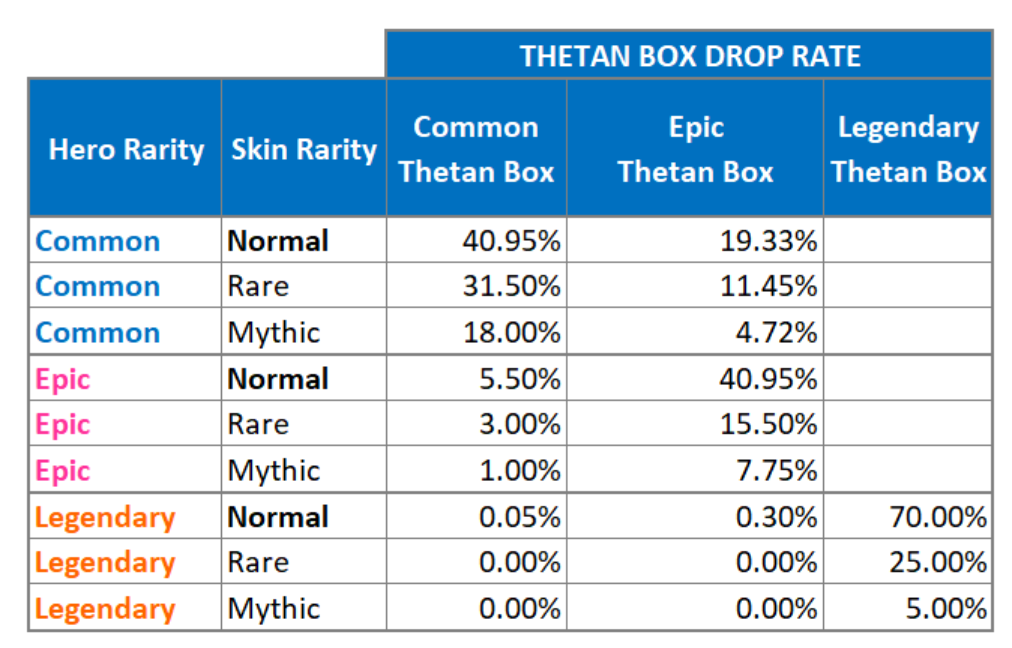 Who is on the team of Thetan Arena?

The current team of Thetan Arena started in 2014 under the Wolffun name. The base of the team is based in Vietnam. Here are the key members of this team.

What is the THG token?

THG is a utility token that currently has two uses. Besides being a token that powers and trades the ecosystem, it is a management token and you can use it for staking.

The distribution of the token looks good, the team gets 21% which tends to the high side but is just acceptable not to suspect a back pull. There is also an unlock schedule that runs through 2024.

Since the ICO, the THG token has increased in value 64x, after an ICO price of $0.08. One of the investors in Thetan Arena is Animoca Brands, the team behind Axie Infinity!

The distribution of the token can be clearly seen in the following image.

The unlocking takes place in this way. 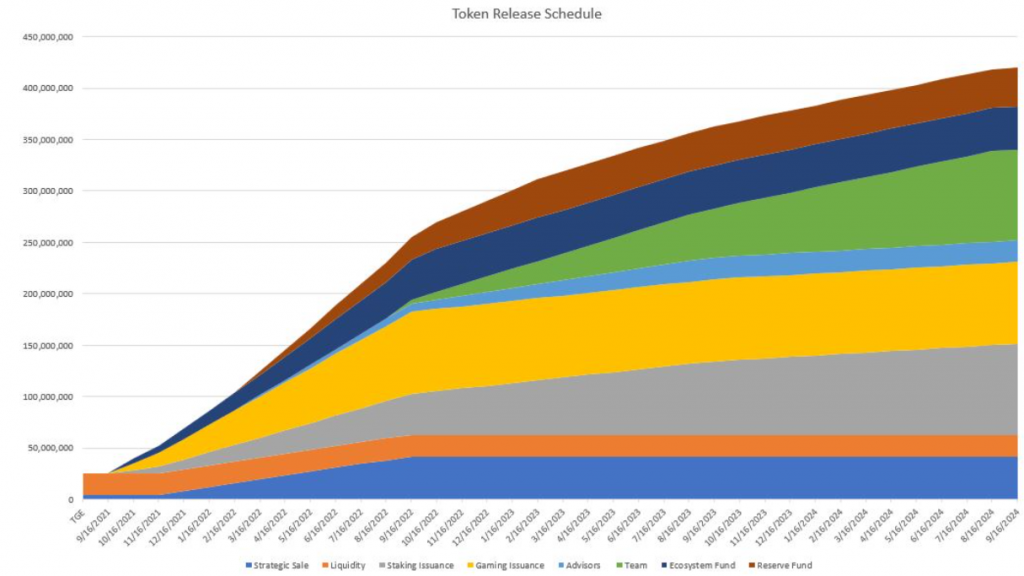 What is the price of the THG token?

If you want to invest in the THG token, a good start is to know its price. If you are already going to trade, you also want to make a profit. You can make a technical analysis to see what the best buy or sell moment is.

At  CoinMarketCap it is just inside the top 3000 in place 2841. This coin has a good prospect, in my opinion, it is a much-discussed game with many players. I think he could have a good price development. If you want to invest in this coin, it is important to do your own research, but please note that I am not a financial advisor.

Where can you buy the THG token?

The THG token is not yet for sale on Bitvavo and  Binance. A few leading CEXs already offer this currency, such as OKex and the very active and interesting  Gate.io  exchange. Almost all tokens can be found on Gate.io and new tokens are added every week. A very good alternative to Bitvavo if a token is not offered there. There is also a liquidity pool on the PancakeSwap DEX where you can find a THG pair.

What is the best way to store the THG token?

You can of course leave your THG token on the exchange where you bought the token. However, now you do not have access to your private keys. The private keys of exchange remain in the hands of the exchange itself. There is always the danger of a hacked exchange and then you have a chance that you will lose your crypto. These wallets on an exchange are also called hot wallets.

Thetan Arena is a fun game that is popular and still has room for growth. However, it remains to be seen which games will make it. There is a wide range of games, but not every game will prove successful. However, Thetan Arena has several advantages, including that this game is the first blockchain-based MOBA game. Since it is a multi-player game, its success will depend in part on how many players will participate in this game.

At the moment the prospects look promising and I can recommend keeping an eye on this game. It has a low entry barrier and can be played for free, with the opportunity to earn crypto anyway.  The Play to earn market is also a fast-growing market, so in that respect, it’s also good for this game.

The price of the THG token will depend on the success of this game. There is a low market cap, so that is certainly interesting. If you want to invest in this token, please do your own research as I am not a financial advisor.

If you have any questions about Thetan Arena, let us know on our Crypto Buying Facebook group. You can also follow us on  Twitter. See you there!